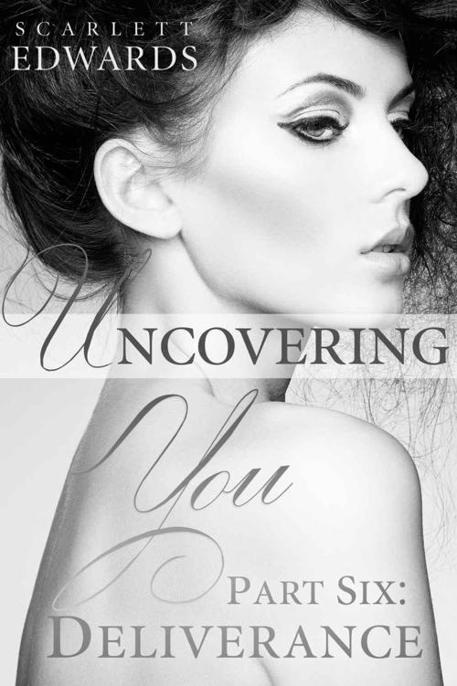 This book is a work of fiction. All names, characters, locations, and incidents are products of the author’s imagination, or have been use fictitiously. Any resemblance to actual persons living or dead, locales, or events is entirely coincidental.

The uploading, scanning, and distribution of this book in any form or by any means---including but not limited to electronic, mechanical, photocopying, recording, or otherwise---without the permission of the copyright holder is illegal and punishable by law. Please purchase only authorized editions of this work, and do not participate in or encourage electronic piracy of copyrighted materials. Your support of the author’s work is appreciated.

This book is dedicated to Renee Reynolds and Angela Carroll.

Renee, for making it possible.

Angela, for making it shine.

Uncovering You
contains scenes of intense emotional and physical abuse. Readers with sensitivity to such subjects are advised to proceed with caution.

That is really the best way to describe Jeremy Stonehart.
When
he was Stonehart.

Is he that anymore? I don't know. As he reveals more and more of himself to me, I start to see a glimmer of the man beneath the surface. I start to understand, in some small way, that even evil comes from a source, from some initial seed that sprouted and took hold of a person's soul.

Evil is what Jeremy Stonehart was. But is it what he will continue to be?

My back hits the concrete wall. Before I can move, Stonehart’s body is against mine. He pins my arms above my head, then uses his other hand to rip the front of my dress down.

My breasts spill out. Deep in his throat, Stonehart makes a savage sound of pleasure. The hand that isn’t pinning me grabs my left breast and squeezes hard.

A small whimper of pain escapes my lips. Stonehart gives it no heed. His mouth drops to mine and he kisses me with shocking intensity. My body curves off the wall toward him. The pressure of his erection against my stomach fires my need.

He releases my hands. They drop down, and I spread them against the concrete wall for support. In the dark, I can see nothing except the pale shape of Stonehart’s body outlined by the moonlight.

He kisses me again. I hitch my leg up and curl it around his hip. The tiny red dress inches to my waist. Thanks to Stonehart’s rules, I am wearing no panties. The slick fabric of his Armani pants feels rough as wool against my inner thighs.

He pushes into me, deepening the kiss. His teeth tighten on my lower lip and he tugs, eliciting a sharp jab of pain. But that’s okay. I know he likes it rough.

Especially when he’s in one of his moods.

“I’m going to fuck you so hard, Lilly,” he rasps. One of his hands slides down my body and grabs my ass. He pushes into me with his hips, plastering my back against the cold, unforgiving wall. “I’m going to fuck you the way you need to be fucked. The way that will have you screaming all night long. The way that will
ensure
you think about nothing but me when we’re meeting Fey tomorrow.”

His hand moves over my leg and pushes into my core. I gasp as two thick, strong fingers plunge inside me.

I grit my teeth as he begins stroking me. His thumb rubs over my clit. His fingers push in and out of me with no remorse. Dark pleasure floods my body from his sinful touch, even through the tightness, even through the pain.

He can be soft, gentle, and caring. I’ve seen that side. I’ve had my fill of it during our dream-like getaways at the villa. That’s when he’s Jeremy.

Or, he can be cruel, harsh, and uncompromising. He can be Stonehart. They are two sides of the same man. They are his Jekyll and Hyde: One man. Two personas. One man. Two names.

Right now, he is most definitely Stonehart. And if he needs to take control of my body to make up for the mishap with Thalia earlier, if he needs to do that to work the anger out of his system, and—hopefully—to return to being Jeremy tomorrow, well, that’s something I’m more than willing to let him do.

Besides, it’s not like I have much choice in the matter.

Without warning, he breaks away. I fall forward, only just managing to catch myself on shaking legs.

Stonehart steps back and tears at his tuxedo buttons. His eyes reflect in the moonlight as they focus squarely on me. I feel like a deer trapped in a hunter’s snare. That penetrating, lustful gaze holds promise of all the things he intends to do to me tonight.

I don’t need him to verbalize them. One look at his face is enough.

His wide shoulders make the two halves of his shirt strain at the chest as he strips his jacket off. He looks so virile, so very male. So very powerful.

My breaths are coming hard and fast. He starts unbuttoning his shirt, revealing the glorious body beneath. His muscled arms are long and lean. His chest is hard. His torso doesn’t have a strip of excess flesh anywhere. It’s astonishing that he finds the time to maintain such a good body, given his position.

But those aren’t the prevalent thoughts running through my head. They’re just there, somewhere in the background, a function of natural female appreciation that comes from seeing such a stunning man.

What I’m thinking, instead, is how vulnerable I am right now. There’s nothing that will hold him back tonight. After the run-in with Thalia, I know he needs an outlet for his aggression.

That outlet, for better or for worse, is me.

He attacks me again. His mouth lands on mine and he kisses me hard as I’m sandwiched between him and the wall. He presses his body into mine. His knee lands between my legs, pinning me there, while he reaches to grab the roots of my hair. An unbidden whimper escapes my lips as he tugs, making my face crane up to give him access to my neck.

He again seals his mouth over mine and kisses me with unabashed passion, anger, and fury.

And I begin to respond.

I let the worries scatter as the deep heat of his kiss ignites my body. Passion and lust come alive as I return his kiss. Long ago, I promised myself that I wouldn’t be a passive victim to Jeremy’s depravity any more. Though events since Portland have definitely changed things between us, I have never lost sight of that.

I just haven’t had the need to make good on that promise yet.

I do now. Tonight, Jeremy wants it rough. He
needs
it rough. And that’s exactly what I’m going to give him.

So I kiss him back. I tangle my hands in his hair and bring him to me. He grunts, maybe in surprise, maybe in appreciation. I don’t care. I’m revved up and ready to go. I’m ready to fuck
him.

The rough hairs on his chest scratch against my bare flesh as he deepens the kiss. My hands move from his head to his back. I claw at him with my nails. The slabs of muscle beneath his skin are hard. They don’t give me much to grab onto. I dig in, pulling him closer, needing him tighter, wanting him… more.

Without warning, he scoops me up. My legs curl around his waist. I hook my ankles together, clinging to him.

A few quick paces and we’re at the bed. Jeremy tosses me on. I land with my hair spread wide around my head.

The tiny dress has ridden up way past my waist. I draw my knees wide, opening my legs, giving him access. Inviting him in. The pure, unadulterated desire that shows on his face when he sees my pussy turns me on more than I thought possible.

There’s no fear left in me anymore. I might have been harboring some, on the silent ride back to the hotel. But, it’s gone now. Hell, I might have even felt it flare into something very dire when Jeremy issued the warning about “one toe stepping out of line.” But if this is the outlet for his aggression… if this is what he needs to work his fury out… hell, I’m more than game.

“Fuck me,” I rasp. I hardly recognize my own voice. Or the words that spill naturally from my lips. “Fuck me, Jeremy. I don’t want you to hold back.”

A flash of something akin to amusement flickers on his face. It’s gone before I can get a second look.

“I don’t think you’ve ever asked to be fucked before,” he murmurs, climbing onto the bed. I squirm under the powerful desire in his eyes.

The outline of his cock is straining through his pants. It fills me with the most urgent need. He edges closer, but doesn’t touch me. “You want me tonight, do you?”

That’s such a ridiculous question I don’t even know how to respond.
He
was the one who initiated things the moment we got through the doors of the suite.
He was
the one who threw me against the wall and began to kiss me. And now that I’m lying here completely vulnerable and exposed to him, he wants to take the time to
ask?

Maybe he wants to hear me beg. It’s certainly nothing I’ve ever done with him before—not when he’s been this aggressive.

“Jeremy…” his name falls from my lips like a forgotten prayer. I cannot even finish the sentence. My mind is too scrambled. I’m too far gone, lost in the throes of some unbridled and wholly unique passion.

My chest heaves with every breath. Even though he hasn’t touched me since tossing me on the bed, arousal pulses through my entire body.

The mattress dips as he shifts closer. On his knees, he still looms over me. He positions himself between my legs. I make fists in the bedding and grip tight. The anticipation is killing me.

A sinister smile touches his lips. He angles his head down, and looks at me with coy, knowing eyes.

“I didn’t expect you to be so receptive,” he murmurs, tracing a finger down the length of my calf. “What a surprise.”

“Stop fucking around and screw me!” The words burst from my mouth before I can stop them.

I clamp a hand over my mouth in shock. I’ve never tried
commanding
him before.

“You know,” he says, his voice low and dangerous, “I’ve never shared this with you before, but the one thing I
hate
…” he brings my foot to his mouth and sucks on my toes, one by one, “is being told what to do in bed.”

I tuck that nugget of information away before returning to the moment. It might prove useful in the future.

“So you tell me you want to be fucked,” he says, continuing that tantalizing teasing with his tongue. “That wouldn’t be a problem, usually, because I want to fuck
you
.” He puts my foot down and sidles even closer. His hands trail back and forth over my spread thighs. The touch is so light, so teasing, and so maddeningly close to where I actually want it to be that it makes the anticipation unbearable.

“The problem, Lilly,” he continues, stroking up and down my bare flesh, “is that we’ve now removed the tension from the equation.”

I stare at him in disbelief. Is he fucking kidding me? The sexual energy between us is so high I’m afraid the room might catch fire!

“You want to be fucked. I want to fuck you. Do you see how that puts me in a dilemma?”

“No,” I say. The man is absolutely insane! “We both want the same thing. So just give it to me, dammit!”