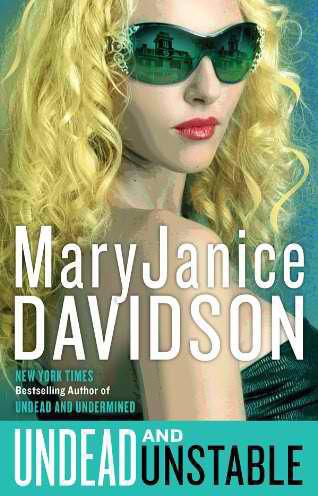 WOLF AT THE DOOR

SLEEPING WITH THE FISHES

FISH OUT OF WATER

JENNIFER SCALES AND THE ANCIENT FURNACE

JENNIFER SCALES AND THE MESSENGER OF LIGHT

RISE OF THE POISON MOON: A JENNIFER SCALES NOVEL

DEAD AND LOVING IT

(includes Sleeping with the Fishes, Swimming Without a Net, and Fish out of Water)

For women in their ninth month of pregnancy:
my sympathy.
Nothing against the miracle of life,
but being a fetal slumlord is no job for the cowardly.

The events of this book take place just before the events of
Wolf at the Door
(Fall 2011). You don’t have to read
WatD
to follow
Unstable
, but it might be amusing. And not just for me.

Also, I’m a dog person. No, really (though after reading this, you may have your doubts). Betsy and I have many things in common: the vanity thing, the not-learning-from-mistakes thing, the bitchy thing, the self-absorption thing, the shrill when freaked thing, the—you know what? I don’t have all day here, people. My point: of our many commonalities, her loathing of canines is not one of them. Dogs rule. Everybody knows.

The Story So Far

Betsy (“Please don’t call me Elizabeth”) Taylor was run over by a Pontiac Aztek about three years ago. Because she’d been attacked by several feral vampires days before, she didn’t die from their attack, but later at the hands of the Pontiac corporation. This was unprecedented in all things vampire, and she woke up their foretold queen and, in dazzling succession (but no real order), bit her friend Detective Nick Berry, moved from a Minnesota suburb to a mansion in St. Paul, solved various murders, attended the funerals of her father and stepmother, became her half brother’s guardian, avoids the room housing the Book of the Dead (
Book of the Dead
, noun: the vampire bible written by an insane vampire on human flesh, which causes madness if read too long in one sitting), cured her best friend’s cancer, visited her alcoholic grandfather (twice), solved a number of kidnappings, realized her husband/king, Eric Sinclair, could read her thoughts (she could always read his), and found out the Fiends had been up to no good (
Fiend
, noun: a vampire given only animal [dead] blood; a vampire who quickly goes feral).

Also, roommate Antonia, a werewolf from Cape Cod, took a bullet in the brain for Betsy, saving her life. The stories about bullets not hurting vampires are not true; plug enough lead into brain matter and that particular denizen of the undead will never get up again. Garrett, Antonia’s lover, killed himself the instant he realized she was dead forever.

As if this wasn’t enough of a buzzkill, Betsy soon found herself summoned to Cape Cod, Massachusetts, where Antonia’s Pack leaders lived. Though they were indifferent to the caustic werewolf in life, now that she was dead in service to a vampire, several thousand pissed-off werewolves had a few questions. (“What, now? You care,
now
?”)

While Betsy, Sinclair, BabyJon, and Jessica were on the Cape answering well-it’s-a-little-late-
now
questions, Tina, Marc, and Laura remained in Minnesota (Tina to help run things while her monarchs were away, Marc because he couldn’t get the vacation time, and Laura because she was quietly cracking up).

They hadn’t been gone long before Tina disappeared and Marc noticed that devil worshipers kept showing up in praise of Laura, the Antichrist.

In a muddled, misguided attempt to help (possibly brought on by the stress of his piss-poor love life… an ER doc, Marc worked hours that would make a unionless sweatshop manager cringe), he suggested to Laura that she put her “minions” to work helping in soup kitchens and such.

As sometimes happens, Laura embraced the suggestion with zeal. Then she took it even further, eventually deciding her deluded worshipers could help get rid of all sorts of bad elements: loan officers, bail jumpers, contractors who overcharge, and… vampires.

With Sinclair’s help (and Jessica’s cheerful-yet-grudging baby-sitting of BabyJon), Betsy eventually convinced the werewolves she’d meant Antonia no harm, that she, in fact, had liked and respected the woman, that she was sorry Antonia was dead and would try to help Michael in the future… not exactly a debt, more an acknowledgment that because she valued Antonia and mourned her loss, she stood ready to assist Antonia’s Pack.

Also, Betsy discovered that her half brother/ward was impervious to paranormal or magical interference. This was revealed when a juvenile werewolf Changed for the first time and attacked the baby, who found the entire experience amusing, after which he spit up milk and took a nap.

Though the infant could be hurt, he could
not
be hurt by a werewolf’s bite, a vampire’s sarcasm, a witch’s spell, a fairy’s curse, a leprechaun’s dandruff… like that. Betsy was amazed—she suspected there was something off about the baby, but had no idea what it could be.

Sinclair, who until now had merely tolerated the infant, instantly becomes besotted (“That’s
my
son, you know.”) and begins plotting—uh, thinking about the child’s education and other necessities.

Back at the ranch (technically the mansion on Summit Avenue in St. Paul), Laura has more or less cracked up. She’s fixed it so Marc can’t call for help (when he discovers their cells no longer work, he sneaks off to find another line, only to be relentlessly followed by devil worshipers who politely but firmly prevent this), and she and her followers are hunting vampires.

Destruction: The December People, Book One by Sharon Bayliss
How To Tame a Rake by Maggi Andersen
Knowing by Viola Grace
In a Heartbeat by Donna Richards
High Heels and Lipstick by Jo Ramsey
The Woman Who Lost Her Soul Hardcover by Bob Shacochis
The Case of the General's Thumb by Andrei Kurkov
El cero y el infinito by Arthur Koestler
Just One Week (Just One Song) by Lynn, Stacey
Waiting for Him by Natalie Dae