Read Under A Living Sky Online

Under A Living Sky 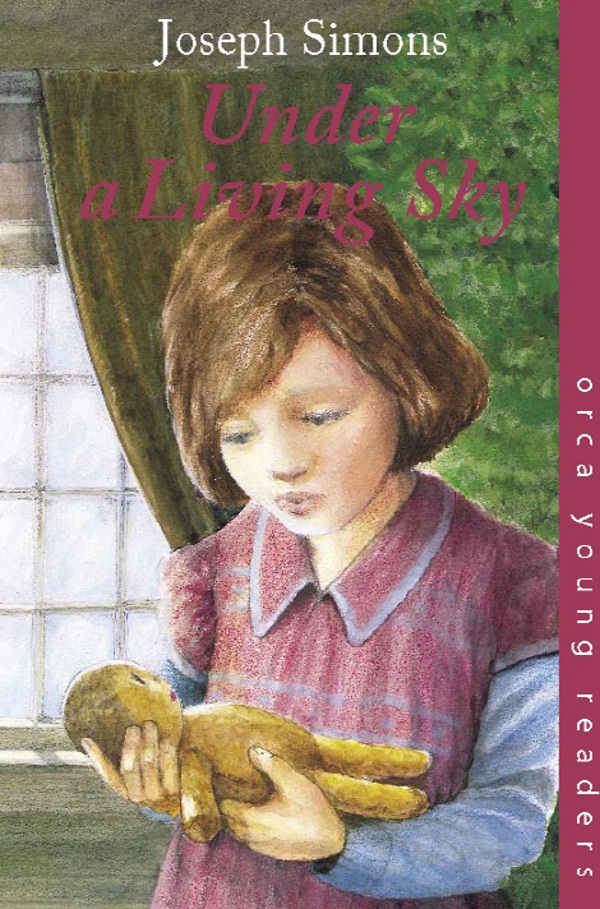 Under a
Living Sky

All rights reserved. No part of this publication may be reproduced or transmitted
in any form or by any means, electronic or mechanical, including photocopying,
recording or by any information storage and retrieval system now known or to be
invented, without permission in writing from the publisher.

Summary
: At the height of the Depression, Mary is unlikely to receive
new shoes for Christmas but is deeply disappointed to receive a doll
crudely sewn from a horse's nosebag instead.

Orca Book Publishers gratefully acknowledges the support for its
publishing programs provided by the following agencies: the Government of
Canada through the Department of Canadian Heritage's Book Publishing
Industry Development Program (BPIDP), the Canada Council for the Arts,
and the British Columbia Arts Council.

In memory of John Doerksen,
who told me this story,
and with gratitude to his daughter,
Karen, who helped me to write it.

The little spot, perfectly round and clear, had begun to frost over. Mary pressed her nose against the window to make another. She was carrying out an experiment. How much heat would it take to make a small clearing in the sheet of ice that lined the big parlor window? Her nose felt quite cold already. It took a lot of heat, she decided, just to make one little clear spot. And when it was made, you couldn't see much through so small a clearing.

The ice had stopped in mid-ooze, like a crowd of white paint people caught running and commanded to sit still, by golly, unless they wanted a chore or two to steady them down.

A muffled call came from above, Mother's. Mary cocked her head, which was difficult because her nose had to be kept tight to the pane of glass. Meanwhile the window breathed in and out, shrieking at the seams and flexing forcefully because of the wind outside. Mary did not reply, and in answer to her non-reply she could feel Mother's aggravation growing. Impatient footsteps sounded on the floorboards of the room above her.

“Mary Elizabeth Vannieuwenhuizen! Do you hear me? You get up here this minute! If you don't clean up your room, Christmas won't come, or not for you anyway!”

Mary sighed. She didn't know why Mother was angry this time. As Papa often said, bedrooms were only a place to sleep. He also said it was a full-time job these days to guess what would set Mother off. Mary wished Mother would stop being upset and give her some peace for a change. All at once, making little round clearings in that big sighing window seemed a lot less fun. Mary slumped down onto the sofa. Feeling her nose, so numb with cold, she smiled. She gave herself both an “A” and a gold star for her experiment.

There was a crack in the side of her shoe. Wiggling her big toe, Mary stretched open the crack, easier to open every week. Not that the shoe was hers, she thought. This shoe was Judith's, an annoying shoe, an annoying sister's annoying shoe. These shoes of Judith's had been passed down to Mary last spring. No, no, no, said Mary to herself, my shoes will be brand new, not worn out by Judith, not worn ever by anybody. They will not be cracked and scuffed. She sighed. It was pleasant to sit on the sofa and dream of shoes never worn by a soul. They were sure to arrive any day now, maybe the very next day.

“Mary Elizabeth!” Another familiar voice, Judith's, piped down the stairs. The notes wavered but ended just like Mother's. No, more shrilly, more like the squeak of a prairie dog caught by a hawk. Mary rolled her eyes at the ceiling. Judith had to repeat every command. She seemed to know what Mother wanted more often than not.

Since her eyes were on the ceiling anyway, Mary studied the angel, the yellow places where rain had leaked in and spread during a fall storm. Papa, although happy to get some rain, had had to go on the roof to put hot tar on the leaky spots. Mary liked seeing the angel up there, arms open wide, ready to laugh and play, never shrill.

Then two things happened at once. Mother's voice went as shrill as Judith's, reaching a point that might be called spanking mad. And the back door opened. It opened with a welcome bang that interrupted the repeated callings of her name. Mary ran gratefully from the warm front room to a kitchen already filled with cold air. A snowstorm was blowing in there. Papa was pulling in the tree. Its green branches bounced over the floor.

Following Papa was her little brother, Joseph. Bound by layers of clothing, Joseph waddled like a penguin and spun on the wet floor. Mary ran to help him shut the door. They pushed and pushed, but the door would not close. The floor was slippery with snow, and the wind was firm as a rock. Papa laughed. “You two make quite a team,” he said. He gave the door a thump with a big mitted hand.

The wind ceased instantly, and the kitchen became silent, except in the stove, where knots of burning wood exploded with regular bangs and whistled up the pipe.

On the floor lay a tree, a bright green tree, strangely out of place inside a house.

“Mary Elizabeth.” Mother spoke from the bottom of the stairs. Her voice was deadly quiet now, the way it got when she was so angry that every word had to be measured. Even Papa looked up at the tone, and Mary watched him instead of turning to Mother. “You get up there this instant and help your sister like I said.”

Mary glanced over. Judith was there too, but higher up, peering triumphantly around the corner of the landing.

Her straight brown hair lay draped like old weeds over the railing.

“A messy room won't matter for an hour,” said Papa gruffly. He was taking off his coat, big and sheepskin soft, with its tattered wool cuffs. “Or a day neither, come to think of it.” His coat hung on the wooden peg by the door, Papa bent to unwind Joseph, who stood nearby, mute and puffed into a state of immobility inside hat, scarves, mittens and coats.

The furrow on Mother's forehead told Mary that she was not out of the woods yet. Mary peeked up at Judith. Her sister's narrowing eyes let Mary know that some little thing would happen later to make up for this tiny victory over Mother, and so over herself. Judith would, as usual, even the score after bedtime.

Joseph was peeled out of his outer clothes by Mother, who had brushed Papa away. Stronger than words, her quick actions told everyone that he was incompetent with children, even down to simple chores like dressing them. Papa frowned a moment, but then saw Mary. He must have noticed how she was getting sad, she thought, for he winked and said, “Come on, Mary. Let's get this tree up.”

Mary held one of the icy branches with its sharp needles while he carried most of the tree into the living room. They inserted the trunk into the red-painted tree holder already in the corner. The tree looked very nice standing by itself. Its green needles were bright against the blanket that Mother had hung to curtain off the leaky window and the front door. This door wasn't used all winter because she'd stuffed the cracks around it with cardboard to keep out the draft.

In the doorway, Mother stood with her arms crossed. Joseph's plump arm circled one of her thighs. Judith poked her head past them, sawing her skinny neck against the doorjamb. Mary looked up to the angel in the ceiling and wished that Christmas day would somehow be happier than these last months. Angels were supposed to bring good news, weren't they? Happy news? I'd even give up my new shoes for some peace and quiet, she told the angel. Studying her old shoes, she added, But only if there's no other way. 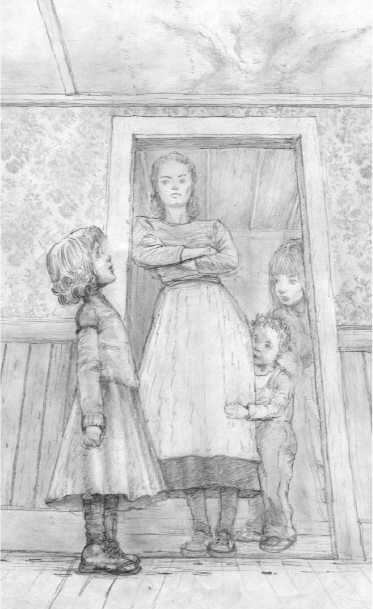 Mary hardly slept all night for thinking about the new unused shoes. They'd be her Christmas present. They just had to be. As she lay awake in the bed with Judith, she reviewed the promise Mother had made in the fall, when Mary's toes had been pushing out the front of her old shoes, which were really Judith's old shoes. “You'll have to wear these of Judith's for a while,” Mother had said as her fingers laced the shoes roughly to Mary's feet.

“But Mother, they flop on me like ducks' feet.”

“Well, if Saint Nicholas and Black Peter don't leave a lump of coal in your sock, maybe they'll bring you new shoes. Or maybe next fall, if you start school, and if we can afford them.”

Mary always remembered the rare smile and the moment of tenderness. It seemed impossible that her year's worth of deeds would get her only a lump of coal. Generally the Saint Nicholas and Black Peter story seemed designed to keep children in their place, but since that moment, Mary was convinced that Mother really did mean to get her shoes this Christmas. Nobody in living memory ever got a lump of coal. She fell asleep with happy thoughts of new shoes, of wearing shoes that fit, of school next fall.

In the morning, a sharp pain in her hip told Mary it must be time to get up. She wished Judith wouldn't be so fast to pinch her in the morning. After all, there was no fun in getting up in a cold room. Judith had dressed already. She flaked the covers on and off Mary. It was futile to say or do anything. Judith was much stronger and seemed able to fashion new torments as she needed them. And whatever Mary said or did always made things worse.

Tell Me You Love Me by Kayla Perrin
Christmas At The Cupcake Cafe by Jenny Colgan
Ivy and Bean Bound to Be Bad by Annie Barrows
What If You Are a Horse in Human Form by Jason the Horse
A Place Beyond The Map by Thews, Samuel
The Worst Witch Strikes Again by Jill Murphy
Just Different Devils by Jinx Schwartz
Skios: A Novel by Frayn, Michael
Lucia Triumphant by Tom Holt
Villa Blue by Isla Dean