Read Under Her Skin Online 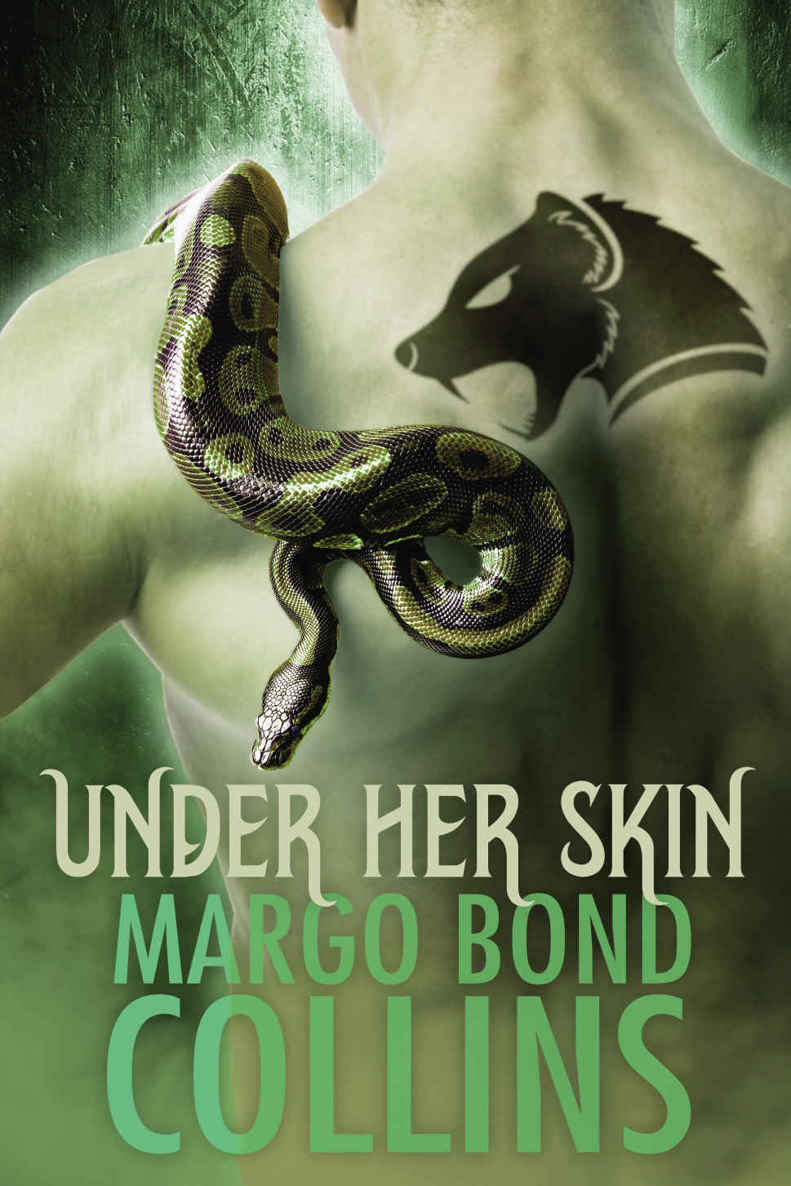 All rights reserved. No part of this book may be used or reproduced in any form or by any means electronic or mechanical, including photocopying, recording or by any information storage and retrieval systems, without prior written permission of the author except where permitted by law.

About Under Her Skin

Lindi Parker works hard at being human, not an easy task for a snake shifter. She has no desire to search for others like her—until a new case changes everything. When Lindi learns that she she's not the only shapeshifter in the world, she realizes she might be next on a killer's list.

In order to save herself and the abused children she works with, she will have to team up with Dr. Kade Nevala, a member of the shifter tribe responsible for eradicating weresnakes—and the most attractive man Lindi's ever met. Even more terrifying, she’ll need to embrace her serpent side, a choice that has enormous consequences for Lindi, and for everyone around her.

About Under Her Skin

“Some sons-a-bitches just need killing.” Detective Daniel Moreland stared down at the body of the man sprawled across the bedroom floor and shook his head. Blood puddled on the hardwood floor and spattered the pink gingham bedspread. It made me dizzy to look at it, so I stared at the detective instead.

I hadn’t realized that I would be able to smell the blood quite so clearly—something the humans around me hadn’t known they would need to mention.

He jerked his head toward the front of the house. “Outside. EMTs have her in the ambulance.”

“Anyone talked to her yet?”

He shook his head. “Just me—and only long enough to get her out to the bus.”

He grunted noncommittally and I turned toward the door, my movements jerkier than I would have preferred—I wanted to pretend that being at a crime scenes didn’t bother me, but it did.

“Hey, Lindi.” Moreland reached out and touched my sleeve. “You see anything. . . .” He paused for a moment, looking around the pink-and-white bedroom as if it might provide the words he was looking for. “You know. Weird?”

I stared into his eyes for a long moment, a frisson of fear shivering its way across my spine.

What does he know?

He bit his bottom lip. “Not sure. We haven’t found the murder weapon yet,” he said. “Just thought maybe you might have some insight.”

“I don’t see anything weird. Just some son-of-a-bitch who needed killing,” I said softly.

He looked into my eyes for a moment longer, then dropped his hand to his side. “Yeah,” he said, just as quietly. “There is that. Go on. See to the girl.”

Outside the house, red and blue lights flashed on the yard, almost blinding me. Neighbors clustered along the sidewalk, their comments and whispers a faint buzz in the night. I licked my lips, surreptitiously tasting the air as I walked toward the ambulance. The copper tang of blood from the house overwhelmed almost everything else, but I tasted an undertone of fear and anger. The scents from the crowd were almost electric on my tongue—their eagerness for news of someone else’s disaster hummed across the air, heightening my shapeshifter senses.

The heat of the August day hadn’t dissipated with nightfall—it rarely does, in Texas—and I could almost see it rising in waves from the asphalt of the street.

It took serious concentration to overcome my desire to sink down, curl up, and soak in the warmth.

Moving into professional mode, I stepped into the rectangle of light cast by the open doors of the ambulance.

Normally I wouldn’t be at an actual murder scene, but a new grant for a community initiative program provided for a counselor from the Child Advocacy and Protection Center—the CAP-C—to work with children present at a potentially traumatic crime scene. Tonight was my night on duty, the first time since the initiative took effect that I got called out. Lucky me.

Ten-year-old Emma Camelli was pretty much certain to be traumatized.

The dead man in her bedroom was her father.

And she was the one who had killed him.

The little girl huddled in the middle of the gurney at the back of the ambulance looked too frail to have stabbed an adult male to death. But the drying blood on her hands and soaking the front of her
Frozen
pajamas belied that frailty. Her dishwater blonde hair hung in hanks around her thin face and she looked up at me, her blue eyes filled with tears.

A uniformed officer I hadn’t met before stood outside the ambulance, her hands looped into her belt. I nodded to her and introduced myself. “Lindi Parker. I’m the counselor.”

The officer looked me up and down appraisingly, her eyes cool. “Joanna Ashford. Moreland told me to watch for you.” Her voice was surprisingly soft and high. “I’ll be right here if you need me.”

“You guys got everything you need from her?” I asked.

Ashford shrugged. “Not yet. She’ll get checked out at the hospital as soon as you give us the go-ahead to leave. CSU will get her clothes and scrape underneath her nails and all that there.”

I hadn’t realized that I would get to talk to her before the techs gathered evidence. Still, I was glad—at least this way I’d be able to let her know what was coming.

I slung myself up into the ambulance. Emma watched me, her lips compressed. She sat cross-legged on the gurney with her arms crossed in front of her.

“Hi,” I said, sitting down on the bench across from her.

When I first started my training, I often tried to convince kids to talk to me. I have discovered over the years, however, that silence is generally a better motivator than questions, at least initially.

So I crossed my arms to mirror Emma’s pose and leaned back against the vehicle wall, waiting, watching the little girl.

The silence stretched out. Emma uncrossed her arms and started picking at something on her leg—I couldn’t tell if it was a scab or dried blood from her dead father.

I uncrossed my arms and dropped them into my lap. Emma glanced at me out of the corner of her eye.

I counted the seconds in my head—a good way to keep myself occupied while waiting for the girl to speak.

“I told him I’d do it,” she said sullenly. She stared at her feet.

“Do what?” I asked, my voice mild. I maintained my casual pose.

“Kill him.” She cut her eyes toward me, gauging my reaction.

“Hm.” I let the silence stretch for a moment, then spoke again. “How come?”

She shrugged. But she’d started talking, so I could probably get the story out of her now. I leaned toward her, my elbows on my knees so that my hands dangled between my legs.

“Did he do something that made you mad?”

I let the silence stretch out again.

Emma’s brow furrowed and she looked up at me through her hair. “You don’t want me to tell you?” she asked.

I shrugged. “Only if you want to.”

She pursed her lips and picked at her leg again.

I only made it to forty-seven before she spoke, this time in a whisper.

“When did he hurt you, Emma?” I asked, purposely using the past tense to counteract her use of the present—he couldn’t hurt her anymore.

Her shoulders hunched in on themselves, making her look even more fragile. “Every time Momma goes out of town.”

“Does your momma go out of town a lot?” I asked.

A nod. “Every two weeks.” I could barely hear her, she spoke so quietly.

I breathed in slowly through my nose, willing myself to bury the anger rising through me—I could deal with it later, after I’d helped Emma.

“How did you hurt him, Emma?” I asked gently.

“Like this.” She stabbed one of her hands straight out in front of her, palm down, fingers pointed away from her. Her back had straightened and she no longer looked frail. Her eyes were narrowed and her mouth twisted in a snarl. She looked feral.

“What did you use to kill him?” I asked.

She turned toward me, confused. “My hand.” Her tone suggested that perhaps I was more than a little slow.

“But what was in your hand?” I asked.

I froze. “Changed it?” I asked, my voice carefully neutral. “How did you change it?”

She tilted her head and looked at me. “You know. I thought about it. And then it changed.”

“What did it look like when it changed?” I asked.

“Like a knife,” she said. “Only all black and shiny. When I change, I get a hard skin. Not like you,” she continued. “When you change, you go all wiggly.”

My breath caught in the back of my throat.

How does she know what happens when I shift?

I started to ask, but Moreland stuck his head in through the door. “We’re about to leave, Lindi. The mom called and is meeting us at the hospital as soon as she can.”

I nodded and stood up, preparing to hop back out of the ambulance and follow Moreland as he walked away.

“It’s where all the shifters go.”