Read Under My Skin Online 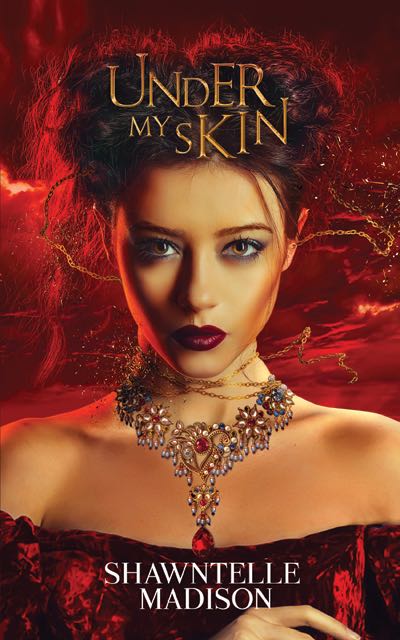 Sun Tzu’s amazing book on military strategy,
The Art of War
, plays a pivotal role in this book. Even though I used a different title and changed the words, I highly recommend reading the book.

This story is a work of fiction. Names, characters, places, and incidents are the product of the author’s imagination or are used fictitiously. Any resemblance to actual events, locales, or persons living or dead is purely coincidental.

All rights reserved. Except as permitted under the U.S. Copyright Act of 1976, no part of this publication may be reproduced, distributed, or transmitted in any form or by any means, or stored in a database or retrieval system, without prior written permission of the author.

The fear of death is more to be dreaded than death itself.

Today would end in failure, but at least it didn’t start out that way.

“Tate, do you think Paul will pass the test today?” my cousin, Zoe, asked me with a grin.

My mom, dad, and younger brother shifted ahead in line. Zoe and I trailed behind, occupying ourselves with conversation. Many families formed a line along the sidewalk. Others would be mulling about in front of similar buildings all over the vast island of Myria. Waiting. Hoping. I didn’t recognize anyone else from my small coastal town. Just face after face of other sixteen-year-olds with their parents. It was almost like registering for classes.

“I doubt it.”
He better not pass the test.
Paul had asked me out this morning. I couldn’t help smiling, thinking about how he stumbled over his words. In a week, I’d meet him at the pier to eat lunch. That is, if we both failed the test.

Another girl, with light brown skin like my brother and me, leaned toward us with a question. “Ever been to North City before?” she asked.

“This is my first time.” Even though I smiled back at her, my hand went up to my mouth. My fingers brushed against the scar above my lips. A cleft lip scar. The skin was soft, but the lines of the ridge always made me self-conscious.

“I’ve been here before a few years ago.” Her gaze took in my lime-colored long-sleeved shirt and cotton pants. Zoe wore the same. Our clothes didn’t look as fashionable as her crimson jumpsuit, but I was quite comfortable for early spring weather like today.

Dad shuffled forward on his cane. “Keep moving.” He looked over his shoulder in our direction. The faint sounds of him wheezing hit my ears. Like wind blowing through the cracks in the walls of our house, small pockets of breath entered his middle-aged body to satisfy starved tissue.

My thirteen-year-old brother Danny followed Dad, momentarily preoccupied by the passing of a gigantic transport ship. Soon enough, he caught up, but we still had plenty of time. Far ahead, the door into the ten-story building waited.

A drizzle swept in, nice and cool. Mom offered us umbrellas. Even with the light rain, everything in North City buzzed around us—beckoning us to watch the shining cars, street-cleaning bots, and—most fascinating of all—skyscrapers covered with a gleaming sheen of solar plates.

Compared to home, this place was amazing. My family could never afford to vacation here, but I planned to move to some place like this after I graduated from high school and got my business certificate. The whole city felt
alive
. Even Danny and Zoe could sense it. We all probably looked like tourists.

The closer we came to the door, the more I expected to see others coming out. But those who might’ve failed the test didn’t emerge. Did that mean everyone passed the test?

Mom must’ve sensed my skepticism. “Stop worrying, sweetheart. Not a single Sullivan has passed.” She grinned and ran her fingers through a few strands of my black hair. A spiral curled around her finger. “In a few hours, we’ll be on our way back home.”

Back home. Not the grandest town, but everything was familiar, from the tallest building, the town hall, to the small fishing boats lined up bow to stern in a broken-down harbor. At least back there, everyone knew about the scar on my face and didn’t stare.

My family sometimes tried to shield me from the world—as if my scar were a crack that might further break into something more. My aunt Patience wasn’t that way though. She always made me stand up for myself, but unfortunately, she couldn’t be here. She was pretty far along in her pregnancy and wasn’t feeling well, so we gave Zoe a ride.

Eventually, we made it the Testing Facility. At the doorway, five guards scanned us for contraband. No weapons were allowed inside government buildings. Not that anyone tried that kind of thing anymore. We had the enforcers around to protect us.

The guards checked Dad’s cane, but they didn’t mark the old oak stick as contraband. Either way, Dad wasn’t in any condition to hurt anyone.

Just beyond the door, two women checked in applicants from behind a desk. One with dark hair greeted us with a smile and scanned the bar code tattoos on our wrists. The other one then offered the parents a plastic-coated packet. Mom placed the packet into her shoulder bag before I could take a peek.

“Thanks for reporting in today, Miss Sullivan,” the dark-haired greeter said to me. “We have a heavy schedule of testing, but we should have your family through here soon.” She eyed my dad’s cane and pursed her shiny red lips. “The wait won’t be long.”

Dad nodded and cleared his throat to get her attention, but she didn’t glance in my father’s direction. The greeter continued to lounge in her leatherback chair, handing out smiles and packets. Why bother when she had a comfortable seat and my poor dad needed to rest?

The same thing happened while she checked in Zoe.

On the walls, large posters of young men and women with their light blue coats smiled down on those waiting in line. These were images of those who became Water Bearers. Under the pictures lay words in gold:
Leadership comes from honor and pride
.

These advertisements were nothing new to me. I’d seen them all over my school.

My fear wavered with each step down the well-lit hallway. The oatmeal I’d eaten that morning churned in my stomach. Others around me chatted about the benefits. The daily meals for the chosen. The opulent life for the lucky ones once the Guild, the rulers and decision makers of our land, acquired them as members of their staff. Most of all, the others around me gushed about the stipend. Enough money for most families to leave the southern part of the island and live in the northern cities with consistent electricity and decent food.

In no time at all, we reached a set of closed double doors. A girl in front of me entered. Would she return through these doors with her test results? I leaned toward the gray doors and listened for sounds. Nothing. No traces of conversation. No noise from machines probing for information. What would they test me for?

During the drive, I’d prodded my parents for information on the test, but they merely shrugged. “You go in and someone checks to see if you qualify,” my mom had said. “I remember taking the test and returning home less than an hour later.”

My parents didn’t go into detail on the lives of the Water Bearers because they were oblivious to city life. My dad always grumbled about how the Guild and the more affluent citizens, who lived in places like North City, didn’t concern themselves with how the people on the coastlines clothed and fed themselves. He’d often say, “They care more about the next popular holo-video star than they do about the people begging in the streets.”

To distract me, Mom tugged on my shirt. “It’s painless,” she whispered to me. “I think you were born with a frown, Tate.”

A laugh tickled the back of my throat. A welcome feeling to the tension in my shoulders. “I’m frowning because I’m realistic. If they pick me—which might happen—I’ll lose all my precollege credits.” I had earned ten credits toward my business certificate. Without a certificate, my options after high school were pretty limited. And folks who lived on the coastline didn’t have much, mine especially. Even though I didn’t want to leave home yet, I couldn’t deny the obvious. Dad needed medication, medicines we couldn’t afford on Mom’s salary.

“I hope they let me see the test,” Danny said. “I bet they stick you with needles and everything. Mom only says something’s painless when needles are involved.”

“You’ll do better as a Water Bearer than you would with a certificate,” Mom pointed out. “And no, there aren’t any needles, Danny.”

I had a life waiting for me back home. Still not interested, needles or not.

The doors opened, revealing a floral scent with an underlying fog of cleanliness.

“That didn’t take long,” Zoe said dryly. “I think I can convince your parents to take us out to look around,” she added in a whisper.

Now
that
was something I wanted to do. “Work your magic while I fail my first test.”

A slim blonde girl, wearing the blue coat of a Water Bearer, ushered me in first. “There’s a free booth to your right. When you’re done, you’ll follow the lights along the floor to the door on the opposite side.”

The room rivaled my school’s auditorium in size, but that was all it had in common with the dingy place I came from. It glowed white; every surface gleamed. In the center of the room were ten booths covered with ivory-colored curtains, through which applicants entered and left. I turned to look at my family, but the girl in the blue coat had already shut the double doors.

My shoes scraped against the floor a few times as I approached the booth.
Here goes nothing.
With the curtains drawn, the only thing I could make out were the numbers above each individual booth. Booth number ten had its curtain closed.

My heart beat so fast, the thrum echoed into my ears. I wiped my damp palms against my pants. Might as well get this over with. Time to take the test.

Opening the curtain revealed a beautiful woman with midnight-black hair who waited for me behind a white desk. Her eyebrows arched over blue eyes. Her fingers flicked to beckon me forward. A compu-tablet on the desk showed my picture. With my personal information and bar code. “You’re Tate, right?”

My head bobbed. My mouth was too full of sandpaper to speak.

“Sit on the stool so I can end your torture.” She grinned, revealing two rows of perfect teeth. Everything about her appeared perfect. No hair out of place. Not a single flaw marred her skin or the silk gown she wore.

I tentatively plopped down on the stool and angled myself away from her. The scent of strawberries filled the booth; her expensive perfume complemented the luxurious jewelry around her neck.

“So quiet compared to the last boy.” The woman leaned forward and took my hand. “He had no mysteries. A canvas already filled to the edges with paint.” She traced her dark-purple fingernails along the sensitive skin of my wrist. Goosebumps formed where she touched me.