Read Under the Glacier Online 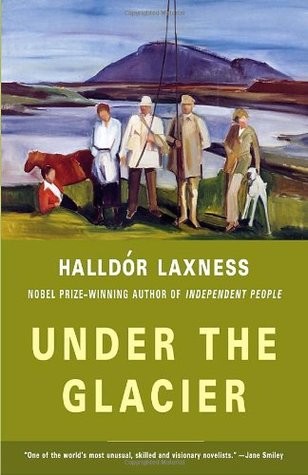 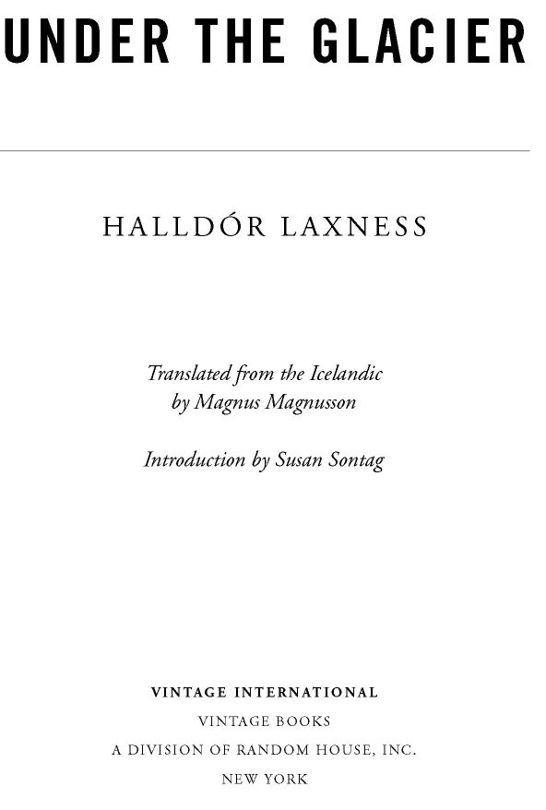 1 - The Bishop Wants an Emissary

2 - Emissary of the Bishop: EmBi for Short

3 - Journey from the Capital to Glacier

5 - The Story of Hnallþóra and the Fairy Ram

8 - Interrogation of the Parish Clerk

14 - Inventory of the Parish Church at Glacier

15 - Le Cimetière Délirant, i.e., the Best Churchyard in the Land

18 - About the Creation of the World, God’s Name among the Teutons, etc., at Glacier (Summary)

24 - The Red One Found, the Grey One Bolted Again

30 - Four Widows or a Fourfold Madam

31 - Your New Instructions, and a Work-Report

33 - The Mourners and Their Solace

35 - Yet Another Disputation about the Same Thing

Halldór Laxness was born near Reykjavík, Iceland, in 1902. His first novel was published when he was seventeen. The undisputed master of contemporary Icelandic fiction, and one of the outstanding novelists of the century, he wrote more than sixty books, including novels, short stories, essays, poems, plays, and memoirs. In 1955 he was awarded the Nobel Prize in Literature. Laxness died in 1998.

The long prose fiction called the novel, for want of a better name, has yet to shake off the mandate of its own normality as promulgated in the nineteenth century: to tell a story peopled by characters whose options and destinies are those of ordinary, so-called real life. Narratives that deviate from this artificial norm and tell other kinds of stories, or appear not to tell much of a story at all, draw on traditions that are more venerable than those of the nineteenth century, but still, to this day, seem innovative or ultra-literary or bizarre. I am thinking of novels that proceed largely through dialogue; novels that are relentlessly jocular (and therefore seem exaggerated) or didactic; novels whose characters spend most of their time musing to themselves or debating with a captive interlocutor about spiritual and intellectual issues; novels that tell of the initiation of an ingenuous young person into mystifying wisdom or revelatory abjection; novels with characters who have supernatural options, like shape-shifting and resurrection; novels that evoke imaginary geography. It seems odd to describe
Gulliver’s Travels
or
Candide
or
Tristram Shandy
or
Jacques the Fatalist and His
Master
or
Alice in Wonderland
or Gershenzon and Ivanov’s
Correspondence from Two Corners
or Kafka’s
The Castle
or Hesse’s Steppenwolf or Woolf’s The Waves or Olaf Stapledon’s Odd John or Gombrowicz’s
Ferdydurke
or Calvino’s
Invisible Cities
or, for that matter, porno narratives simply as novels. To make the point that these occupy the outlying precincts of the novel’s main tradition, special labels are invoked.

Convention dictates that we slot many of the last centuries’ perdurable literary achievements into one or another of these categories.

The only novel I know that fits into all of them is Halldór Laxness’s wildly original, morose, uproarious
Under the Glacier
.

In 1864 Jules Verne published
Journey to the Center of the
Earth
, the charming narrative of the adventures of a party of three, led by a German professor of mineralogy—the irascible mad-scientist type—who have lowered themselves into an extinct volcanic crater on a glacier in Iceland, Snæfells, and eventually exit upward through the mouth of an active volcano on another island, Stromboli, off the coast of Sicily. Just over a hundred years later, in 1968, Snæfells is again the designated portal of another unlikely fictional mission in a novel by Iceland’s own Halldór Laxness, written with full mocking awareness of how the French father of science fiction had colonized the Icelandic site. This time, instead of a journey into the earth, mere proximity to the glacier opens up access to unexpected, cosmic mysteries.

Imagining the exceptional, often understood as the miraculous, the magical, or the supernatural, is a perennial job of storytelling. One tradition proposes a physical place of entry—a cave or a tunnel or a hole—which leads to a freakish or enchanted kingdom with an alternative normality. In Laxness’s story, a sojourn near Snæfells does not call for the derring-do of a descent, a penetration, since, as Icelanders who inhabit the region know, the glacier itself is the center of the universe. The supernatural—the center—is present on the surface, in the costume of everyday life in a village whose errant pastor has ceased to conduct services or baptize children or bury the dead. Christianity— Iceland’s confession is Evangelical Lutheran—is the name of what is normal, historical, local.
1
(The agricultural Viking island converted to Christianity on a single day at the Althing, the world’s oldest national parliament, in 999.) But what is happening in remote Snæfells is abnormal, cosmic, global.

Science fiction proposes two essential challenges to conventional ideas of time and place. One is that time may be abridged, or become “unreal.” The other is that there are special places in the universe where familiar laws that govern identity and morality are violated. In more strenuous forms of science fiction, these are places where good and evil contend. In benign versions of this geographical exceptionalism, these are places where wisdom accumulates. Snæfells is such a place—or so it is stipulated. People lead their mundane, peculiar lives, seemingly unfazed by the knowledge of the uniqueness of where they live: “No one in these parts doubts that the glacier is the centre of the universe.” Snæfells has become a laboratory of the new, the unsettling: a place of secret pilgrimage.

As a species of storytelling, science fiction is a modern variant of the literature of allegorical quest. It often takes the form of a perilous or mysterious journey, recounted by a venturesome but ignorant traveler who braves the obstacles to confront another reality that is charged with revelations. He—for it is always a he—stands for humanity as apprenticeship, since women are not thought to be representative of human beings in general but only of women. A woman can represent Women. Only a man can stand for Man or Mankind—everybody. Of course, a female protagonist can represent The Child—as in
Alice in Wonderland
—but not The Adult.

Thus, both
Journey to the Center of the Earth
and
Under the
Glacier
have as their protagonists and narrators a good-natured, naive young man who submits his will to that of an older authority figure. Verne’s narrator is the eminent Professor Lidenbrock’s orphaned nephew and assistant, Axel, who cannot refuse the invitation to accompany his uncle and an Icelandic guide on this adventure, though he is sure that it will cost them their lives. In Laxness’s novel, which opens on a note of parody, the narrator is a nameless youth whom the bishop of Iceland in Reykjavík wants to send to the village at the foot of Snæfells Glacier “to conduct the most important investigation at that world-famous mountain since the days of Jules Verne.” He is to find out what has happened to the parish there, whose minister—pastor Jón Jónsson, known as Prímus—has not drawn his salary for twenty years. Is Christianity still being practiced? There are rumors that the church is boarded up and no services held, that the pastor lives with someone who is not his wife, that he has allowed a corpse to be lodged in the glacier.

The bishop tells the young man he has sent countless letters to Prímus. No answer. He wants the young man to make a brief trip to the village, talk to the pastor, and take the true measure of his spiritual dereliction.

And beyond science fiction:

For instance, both science fictions and philosophical novels need principal characters who are skeptical, recalcitrant, astonished, ready to marvel. The science fiction novel usually begins with the proposal of a journey. The philosophical novel may dispense with the journey—thinking is a sedentary occupation—but not with the classical male pair: the master who asks and the servant who is certain, the one who is puzzled and the one who thinks he has the answers.

In the science fiction novel, the protagonist must first contend with his terrors. Axel’s dread at being enrolled by his uncle in this daft venture of descending into the bowels of the earth is more than understandable. The question is not what he will learn but whether he will survive the physical shocks to which he will be subjected. In the philosophical novel, the element of fear—and true danger—is minimal, if it exists at all. The question is not survival but what one can know, and if one can know anything at all. Indeed, the very conditions of knowing become the subject of rumination.