Read Under the Moons of Mars Online

Under the Moons of Mars 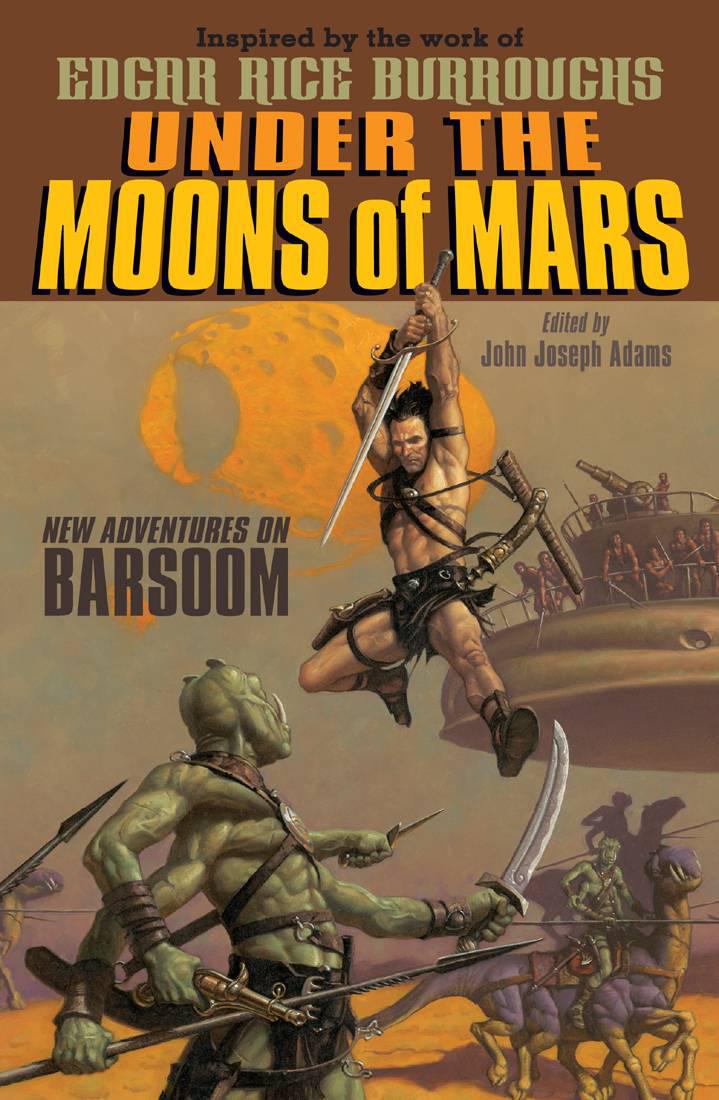 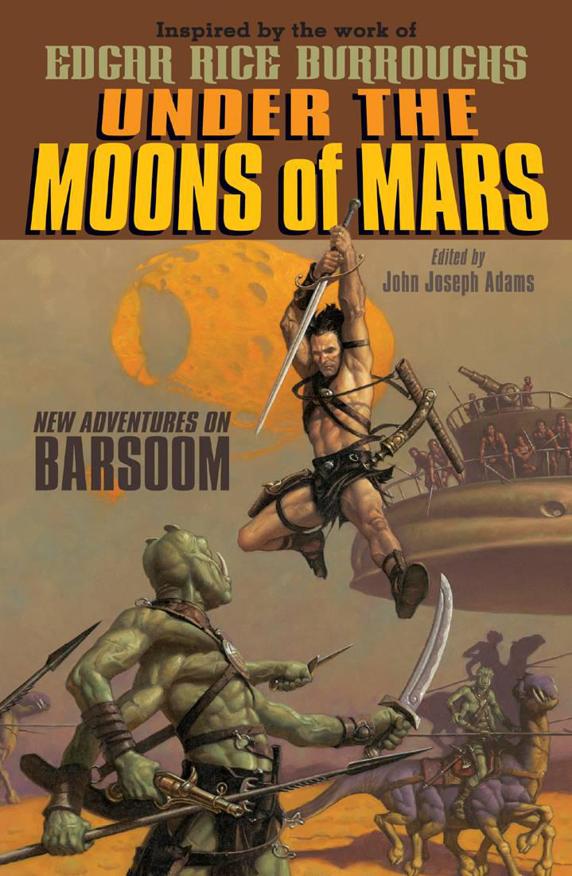 UNDER THE
MOONS of MARS

Watch videos, get extras, and read exclusives at
TEEN.SimonandSchuster.com

E
DGAR RICE BURROUGHS’S classic stories of John Carter’s adventures on Mars have thrilled and compelled readers for a century. Now acclaimed editor John Joseph Adams brings you fourteen all-new escapades from some of today’s most adventurous talent, including Garth Nix, Jonathan Maberry, Robin Wasserman, Peter S. Beagle, and many more. These stories are illustrated by Michael Wm Kaluta, Molly Crabapple, and others, with a foreword by Tamora Pierce and a glossary of Martian terms by Richard A. Lupoff.

Within these pages lurk an encounter with the terrifying Metal Men of Mars, a glimpse into the workings of the savage Thark culture, and a game of human chess—with deadly consequences. Daring readers will meet old friends, bitter enemies, and begrudging allies, as well as heroes of breathtaking bravery. The red planet contains a multitude of adventures, and at long last, here are fourteen new ones that are sure to delight.

In honor of the one hundredth anniversary of the publication of
A Princess of Mars
, this collection of brand-new stories will thrill old fans and enchant new readers.

JOHN JOSEPH ADAMS
is the bestselling editor of many anthologies, such as
Wastelands
,
The Living Dead
,
The Living Dead 2
,
By Blood We Live
,
Federations
,
The Improbable Adventures of Sherlock Holmes
,
Brave New Worlds
,
The Way of the Wizard
, and
Lightspeed: Year One
. Forthcoming anthologies include
The Mad Scientist’s Guide to World Domination
and
Armored
. Barnes & Noble named him “the reigning king of the anthology world,” and in 2011 he was nominated for two Hugo Awards and two World Fantasy Awards. He is also the editor of
Lightspeed
magazine and is the cohost of
The Geek’s Guide to the Galaxy
podcast, which airs on
io9.com
. John lives in California. Learn more at
johnjosephadams.com
. 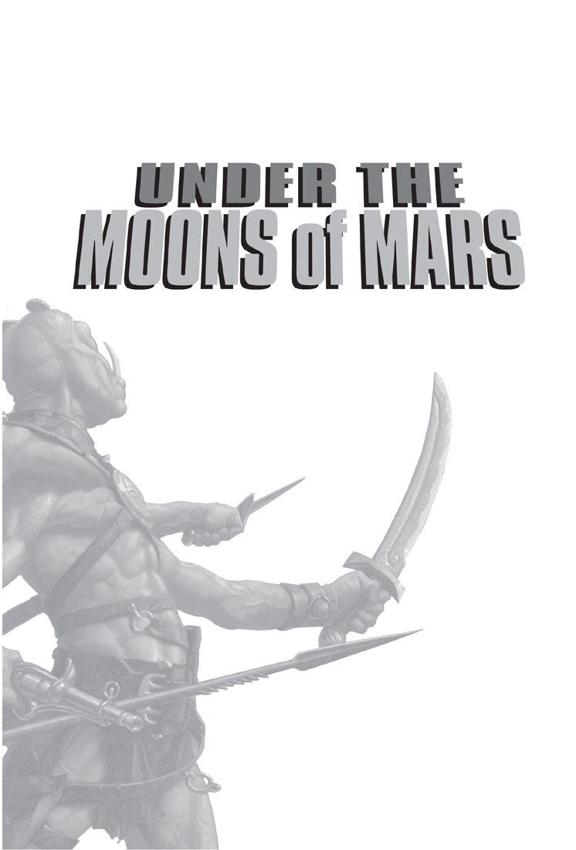 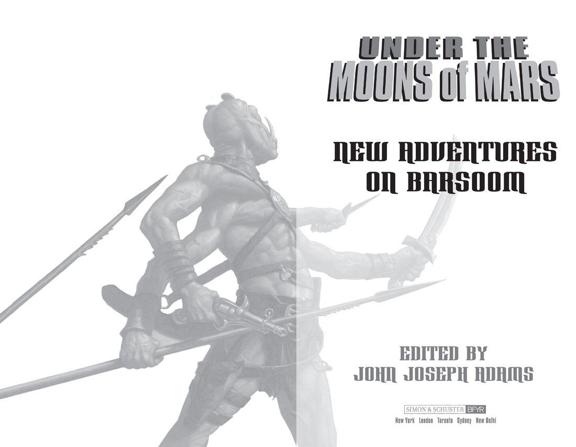 This book is a work of fiction. Any references to historical events, real people, or real locales are
used fictitiously. Other names, characters, places, and incidents are products of the author’s imagination,
and any resemblance to actual events or locales or persons, living or dead, is entirely coincidental.

is a trademark of Simon & Schuster, Inc.
The Simon & Schuster Speakers Bureau can bring authors to your live event. For more information
or to book an event, contact the Simon & Schuster Speakers Bureau at 1-866-248-3049
or visit our website at
www.simonspeakers.com
.
Book design by Tom Daly
The text for this book is set in Berthold Baskerville Book.
The illustrations for this book are rendered in various media.
2 4 6 8 10 9 7 5 3 1
Library of Congress Cataloging-in-Publication Data
Under the moons of Mars : new adventures on Barsoom / edited by John Joseph Adams. — 1st ed.
v. cm.
Summary: An anthology of original stories featuring the Edgar Rice Burroughs character John Carter,
an Earthman who suddenly finds himself on a strange new world, Mars.

The Cowboy and the Angel by T. J. Kline
On the Divinity of Second Chances by Kaya McLaren
Horoscope: The Astrology Murders by Georgia Frontiere
The Ultimates: Against All Enemies by Alex Irvine
A Table By the Window by Lawana Blackwell
Cutler 1 - Dawn by V.C. Andrews
Conspiración Maine by Mario Escobar Golderos
Programmed To Please (The Tau Cetus Chronicles) by Jenna Ives
The Nanny by Evelyn Piper
Fallen by Lauren Kate