Read Under the Moon's Shadow Online

Under the Moon's Shadow 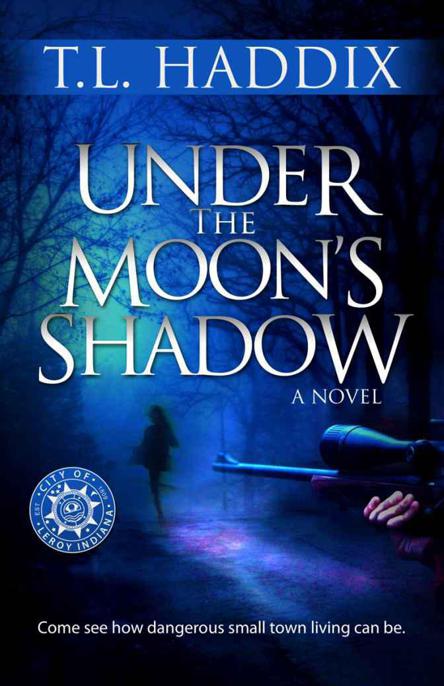 A division of Streetlight Graphics

All rights reserved. No part of this book may be used or reproduced in any manner whatsoever without written permission, except in the case of brief quotations embodied in critical articles and reviews. For information, address Streetlight Graphics Publishing, a division of Streetlight Graphics.

This eBook is licensed for your personal enjoyment only. This eBook may not be resold or given away to other people. If you would like to share this book with another person, please purchase an additional copy for them. Thank you for respecting the hard work of this author.

“Under the moon’s shadow,

all creatures hide their indiscretions.

The truth grows impatient, waiting for the sun’s rays

to expose the skeletons revealed in the dark

Other books by T. L. Haddix

Beth Hudson opened her eyes to see a tiny, still-green leaf float past her face. It was moving slowly, that leaf, as though it had all the time in the world. She followed its movements, turning her head to watch when it caught on a tall, spiky stalk of grass.

There was a sudden pressure on her abdomen, accompanied by a pain like nothing she had ever felt before.  The sharp burn left her gasping, her hand going to her belly. When a warm hand curled around hers, she looked up and saw Cullen Jarvis leaning over her, his face tense with worry. He was speaking, but she couldn’t make sense of the words through the roar in her ears. She tried to lift an arm toward him, but when a second pain spiked its way through her shoulder, she dropped her arm back down to her side.  He moved her legs, bending them at the knees, and some of the pain in her abdomen dissipated. She tried to thank him, but everything faded around her, and just that quickly, the world went black.

The next time she opened her eyes, her brother Jason hovered above her where Cullen had been before. To her surprise, his cheeks were wet with tears.

“Why are you crying?” He didn’t answer, and she realized that she hadn’t asked the question aloud.

Suddenly, two EMTs appeared. They surrounded her, and as one shined a light in her eyes, her sluggish mind started putting the puzzle pieces together.  Obviously, she was hurt, and from Jason’s reaction, the injury was serious. She tried to remember what she had been doing earlier.

Maybe if I close my eyes, she thought. The quick flashback to the floor of a dirty van startled her.  She remembered hearing the sound of mean laughter, and then the memory of facing the wrong end of a rifle barrel. The truth settled in around her with painful clarity. Her injuries weren’t the result of a car wreck or an accident on the farm. The pains in her shoulder and her abdomen had not been caused by a fall or some other benign mishap. She had been shot.

The Monday-morning staff meeting at the
Olman County Journal
had ended, and Beth was heading back down to her desk after a quick, private meeting with her editor.

“The mayor’s upset,” Marshall told her. “I got an early wake-up call this morning. The article on the budget kickbacks for the animal shelter? It stirred up the hornet’s nest we predicted it would.”

“Well, we prepared for that eventuality,” she said. “Let them do their worst. Like you said last week, it’ll be good for publicity.”

Marshall laughed. “True. So tell me about this Cullen Jarvis thing – I know you don’t want to believe he’s hallucinating.”

Early that morning, Beth had been called out to Randy and Cullen Jarvis’s farm, just outside Leroy. For several weeks now Cullen, along with several other local farmers, had been reporting mysterious lights in their fields at night. The next day when the scenes were investigated, evidence of trespassers would usually be found.  Most of the damage was minimal, a few rows of flattened corn or beans, but some was more sinister. Three farmers had found remnants of what looked like Satanic altars.

Cullen, however, had yet to produce any evidence his sightings were more than the hallucinations of a paranoid schizophrenic.

“No, I don’t. If he was the only one reporting these incidents, I could see it  all being in his head, maybe. But with all these other farmers experiencing similar occurrences? I don’t believe in coincidence.”

Leaning back in his chair, he pinched the bridge of his nose. “Me either. Look, you usually have good instincts about these things. I can’t authorize you to focus only on Cullen, but if you get any spare time, run with it. See where it leads.”