Read Under the Red Flag Online 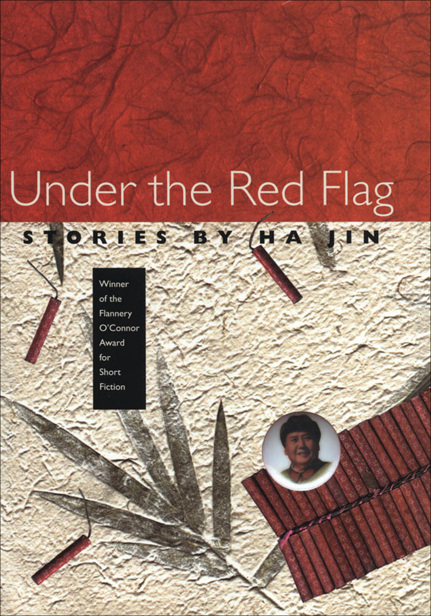 Winner of the Flannery O’Connor Award for Short Fiction

Published by the University of Georgia Press

The Library of Congress has cataloged the hardcover edition of this book as follows:

Under the red flag: stories / by Ha Jin.

“In Broad Daylight” first appeared in the
Kenyon
Review and was winner of the
Kenyon
Review Prize for Fiction (1993) as well as the Pushcart Prize (1995). It was reprinted in
Norton Introduction to Fiction, Norton Introduction to Literature
, and
Into the Widening
World:
International Coming-of-Age Stories
, ed. John Loughery (Persea Books). “Emperor” was also first published in the
Kenyon
Review. “Man to Be” originally appeared in
TriQuarterly
under a slightly different title and was winner of the Pushcart Prize (1997). “Winds and Clouds over a Funeral” was first published in the
Indiana
Review, “The Richest Man” in the
North American
Review, “New Arrival” in the
Chicago
Review, “Fortune” in the
International Quarterly
, ”Resurrection” in the
Atlantic Monthly
, and “A Decade” in
Cicada
.

Winds and Clouds over a Funeral

While I was eating corn cake and jellyfish at lunch, our gate was thrown open and Bare Hips hopped in. His large wooden pistol was stuck partly inside the waist of his blue shorts. “White Cat,” he called me by my nickname, “hurry, let’s go. They caught Old Whore at her home. They’re going to take her through the streets this afternoon.”

“Really?” I put down my bowl, which was almost empty, and rushed to the inner room for my undershirt and sandals. “I’ll be back in a second.”

“Yes, all the kids on our street have left for her house. I came to tell White Cat.” He paused. “Hey, White Cat, hurry up!”

“Coming,” I cried, still looking for my sandals.

“Good, good!” Grandma said to Bare Hips, while flapping at flies with her large palm-leaf fan. “They should burn the bitch on Heaven Lamp like they did in the old days.”

“Come, let’s go,” Bare Hips said to me the moment I was back. He turned to the door; I picked up my wooden scimitar and followed him.

“Put on your shoes, dear.” Grandma stretched out her fan to stop me.

“No time for that, Grandma. I’ve got to be quick, or I’ll miss something and won’t be able to tell you the whole story when I get back.”

We dashed into the street while Grandma was shouting behind us, “Come back. Take the rubber shoes with you.”

We charged toward Mu Ying’s home on Eternal Way, waving our weapons above our heads. Grandma was crippled and never came out of our small yard. That was why I had to tell her about what was going on outside. But she knew Mu Ying well, just as all the old women in our town knew Mu well and hated her. Whenever they heard she had a man in her home again, these women would say, “This time they ought to burn Old Whore on Heaven Lamp.”

What they referred to was the old way of punishing an adulteress. Though they had lived in the New China for almost two decades, some ancient notions still stuck in their heads. Grandma told me about many of the executions in the old days that she had seen with her own eyes. Officials used to have the criminals of adultery executed in two different ways. They beheaded the man. He was tied to a stake on the platform at the marketplace. At the first blare of horns, a masked headsman ascended the platform holding a broad ax before his chest; at the second blare of horns, the headsman approached the criminal and raised the ax over his head; at the third blare of horns, the head was lopped off and fell to the ground. If the man’s family members were waiting beneath the platform, his head would be picked up to be buried with his body; if no family member was nearby, dogs would carry the head away and chase each other around until they ate up the flesh and returned for the body.

Unlike the man, the woman involved was executed on Heaven Lamp. She was hung naked upside down above a wood fire whose flames could barely touch her scalp, and two men flogged away at her with whips made of bulls’ penises. Meanwhile she screamed for help and the whole town could hear her. Since the fire merely scorched her head, it took at least half a day for her to stop shrieking and a day and a night to die completely. People used to believe that the way of punishment was justified by heaven, so the fire was called Heaven Lamp. But that was an old custom; nobody believed they would burn Mu Ying that way.

Mu’s home, a small granite house with cement tiles built a year before, was next to East Wind Inn on the northern side of Eternal Way. When we entered that street, Bare Hips and I couldn’t help looking around tremulously, because that area was the territory of the children living there. Two of the fiercest boys, who would kill without thinking twice, ruled that part of town. Whenever a boy from another street wandered into Eternal Way, they would capture him and beat him up. Of course we did the same thing; if we caught one of them in our territory, we would at least confiscate whatever he had with him: grasshopper cages, slingshots, bottle caps, marbles, cartridge cases, and so on. We would also make him call every one of us “Father” or “Grandfather.” But today hundreds of children and grown-ups were pouring into Eternal Way; two dozen urchins on that street surely couldn’t hold their ground. Besides, they had already adopted a truce, since they were more eager to see the Red Guards drag Mu Ying out of her den.

When we arrived, Mu was being brought out through a large crowd at the front gate. Inside her yard there were three rows of colorful washing hung on iron wires, and there was also a grape trellis. Seven or eight children were in there, plucking off
grapes and eating them. Two Red Guards held Mu Ying by the arms, and the other Red Guards, about twenty of them, followed behind. They were all from Dalian City and wore homemade army uniforms. God knew how they came to know there was a bad woman in our town. Though people hated Mu and called her names, no one would rough her up. These Red Guards were strangers, so they wouldn’t mind doing it.