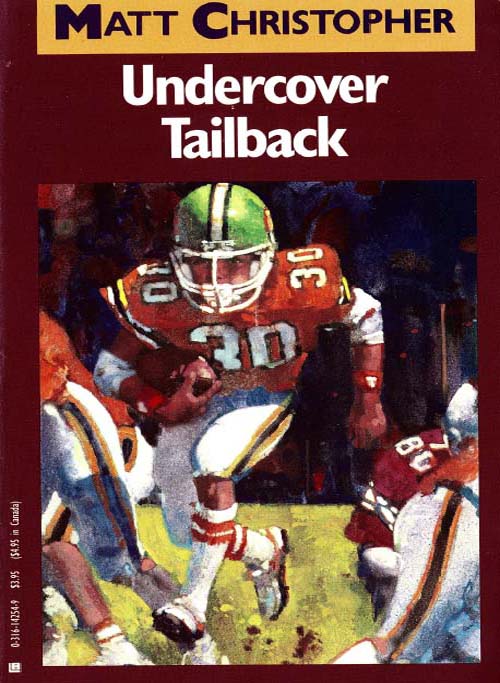 To Casey, Cody, and Benjamin

The twelve-year-old boy crouched down and stared straight ahead. A scrawny, freckle-faced heap of helmet, pads, muddy uniform,
and mean eyes glared back at him.

“Parker! You promised!” the voice from the sidelines roared again. “You said you’d take my bike to school for me! Where is
it?”

Parker Nolan tried to ignore his sister’s shouts and concentrate on warming up for football practice.

Thud!
He had made his block. Caught off balance, Freddie Ferrone hit the ground. Twisting
to the left, Parker curled around the fallen lineman.

The whistle blew, signaling the start of a scrimmage. Parker reached down to help his teammate to his feet.

“Got me,” said Freddie with a laugh. “Wait until next time!” He ran off to join the defensive team.

By now, Melissa Nolan was stomping across the field in a rage. “Where is it, Parker? The bus is gone now — I need my bike,”
shouted the angry fifth grader.

Parker took off his helmet and edged her toward the sideline. “Take it easy, Melissa.” He reached over and tried to give her
a hug.

“You didn’t fix it, did you?” wailed the young girl. “You promised you’d ride it to school after you fixed it! I trusted you.”
Her brown eyes started to fill up with tears. She plopped herself down on the grass at the edge of the field.

“I
did
fix it, but then … it got a flat tire,” Parker said, sitting down next to her. “It took
so long to fix that, I was really late. Luckily, I got a ride to school at the last minute.”

“You’re lying, Parker. Just like always. Now I have to walk home!” Melissa turned and stomped off toward the bleachers, wiping
her eyes.

I’ll play Go Fish or War with her after supper, Parker decided. That’ll make it up to her.

Coach Sam Isaac didn’t have a lot of patience. “You planning to practice, Nolan? Or are you so good you don’t have to?”

Parker ran out to the offensive huddle at one end of the field. “What’s the play?” he asked Spike Newton, the quarterback.

The blue-eyed, sandy-haired Newton just shook his head at him. Some of the other players were laughing at him. They pointed
as if he were crazy.

Morris Comer, the burly left guard said, “Do you always play without a helmet?”

“Yeah, I ought to give you the ball right now,” sneered Spike. “That’d knock some sense into you.”

Parker glanced over to the sideline. He remembered taking his helmet off when he was talking to Melissa. He must have left
it there. But now she was gone, and there was no helmet in sight. Where was it?

“I was just going to say something,” Parker blurted out. “Someone must have stolen it. There was this creep hanging out watching
us. He must have swiped it while my back was turned.”

“You guys never believe me,” Parker protested as Mitch Crum, the all-purpose substitute offensive back, barged his way into
the huddle.

“Hey, Parker, you missing something?” Mitch handed over a green-and-orange helmet with a white stripe.

“Where did you get my helmet? Did you find the creep who stole it?” Parker asked.

“Creep? Your sister threw it at the bench. She looked real mad,” said Mitch. He turned and ran back to the sidelines.

“Hey, Parker, is it true your nose gets bigger when you tell lies, like Pinocchio?” asked Huey Walker, the chunky, red-headed
center.

“Parker ought to have a real honker,” snorted Cris Muldoon, the wide receiver. The whole team doubled over, choking with laughter.

“What’s going on out there?” shouted Coach Isaac. “Are you guys going to play football or what?”

“Okay, guys,” said Spike. “Let’s see how good Parker is with his helmet on. We’ll go with Thirty-two Grind.”

Thirty-two Grind meant Spike would fake a quick pass, then hand the ball off to Parker. If everything went right, there would
be a hole in the line just off center on the right for Parker to break through.

Parker knew that the guys wouldn’t let him forget the helmet story. The best he could do now was show them that he really
cared about playing ball. He hunched down and got ready for the handoff.

As Spike called the signals, Parker thought about Melissa’s bike. So he forgot to tell her he didn’t take it to school. It
wasn’t that long a walk home. It wasn’t as though she was going to be late for something.

Suddenly he felt the ball slap against his chest. Instinctively he wrapped one arm around it and leapt forward toward the
hole in the line.

But he was too late. The hole wasn’t there. Recovering from their blocks, the defense had formed a solid wall. Parker came
up against a mound of flailing arms and legs. Someone landed on top of him, and a whistle blew.

When they unscrambled the pileup, Parker still had the ball in his hand. He put it down and joined the huddle a few yards
away.

“Okay, guys, let’s get off Parker’s case and play some ball,” grumbled Moose Brogan, the tight end. “I want to catch some
passes.”

“Me, too,” said Stacy Fishburne, the other wide receiver. “How about Seventeen Red?”

Spike nodded, and they lined up for the next play. All Parker had to do was block his man. That would help give Spike time
to throw.

It worked. Stacy took an easy fifteen-yard pass and ran it offside for a gain of twenty.

“Nice pass,” called Coach Isaac. “Okay, let’s mix them up. I want to see some running, too. And you linemen, how’s about opening
a few holes for the runners?”

But Spike tried another pass, this time to Moose. He hit for a gain of ten yards.

His next pass, to Cris Muldoon, was right on the mark, too.

Crouched down in the huddle, Fabian deRosa, the rugged fullback, muttered, “Give me the ball. I’ll show him some running.”

Putting me on the spot, thought Parker. Okay, why not?

They lined up, and Huey snapped the ball to Spike. The fake pass was followed by the hand-off. This time the hole was right
where it was supposed to be. Parker sped through it into the open field.

If this were a real game, I’d see some points on the scoreboard, he thought as he trotted across the goal line.

Excited but a little tired when he came off the field, Parker sat down on the bench. Coach Isaac was standing a few yards
away, talking to Rook Stubbs, the trainer. Parker could just make out the coach’s words.

“That Parker,” said the coach, nodding over his shoulder toward the bench. “Sometimes, you just have to hand it to him.” He
quickly added, “I mean the football.”

The rest of the scrimmage went pretty well. Parker made a few more good plays and had
some nice runs. When he concentrated on what he was doing, he was a strong offensive runner.

On the way to the locker room, a few players stopped at the drinking fountain.

Mitch asked Parker, “What was with your little sister, anyhow?”

Parker quickly showered and got into his school clothes. Then he took his pads and dirty practice uniform to the equipment
room around the corner.

“Where’s your helmet?” asked Rook Stubbs. In addition to his job as trainer, Stubbs took care of just about everything else
— except coaching.

Parker blinked. “I guess I left it near my locker. Wait a minute — I’ll go get it.”

Stubbs shook his head. “Take a break, Parker. I have it right here.”

“Where’d you get it? Somebody must have tried to steal it again,” Parker stammered.

“Could’ve,” said Stubbs. “Or it could be that you left it near the fountain outside. A couple of the guys gave Coach Isaac
some lip. He sent them back to do a few laps while you were getting cleaned up. One of them brought it in.”

The door next to the equipment room had opened. Coach Isaac had come out and had heard Stubbs’s story.

“You seem to be having some memory problems, Parker,” Coach Isaac said. “I know just the thing for it. Get to practice early
tomorrow and do fifteen laps. And don’t give me a short count. I may not be there to watch you, but I’ll know.”

Parker didn’t say a word. He just nodded and picked up his gym bag. Fifteen laps! On top of his regular warmups? By the time
scrimmage starts, I’ll need a stretcher, he thought ruefully.

Parker watched to see if Melissa would squawk about her bike. But the ten-year-old girl was silent.

“You didn’t get hurt during practice, Parker, did you?”

She always worried about him. He used to talk about football with his father all the time. But in the three years since Mr.
Nolan had died, Parker had shrugged off any discussion about the game.

“That should really make me wonder if something’s wrong.” Mrs. Nolan laughed. “But I’m not going to worry about it. This working
gal is going to soak in a nice hot tub for a while. Then I’m going to bed. Don’t stay up too late — and no watching those
horror movies on TV.”

She’d hardly left the room before Melissa had dealt out the whole deck of cards.

The game of War began.

Parker stared down at the pile of cards in front of him. He turned one over. It was a nine.

Slowly Melissa turned over a card: a ten.

She scooped up both overturned cards and tucked them under her pile.

Parker stretched and turned over another card. It was the ace of clubs.

Melissa turned over hers: the ace of diamonds.

“War!” she shouted, her voice filled with joy.

A few minutes later, she wasn’t so happy. Parker had collected the pile of cards and was now ahead. Several hands later, his
stack was even thicker.

“Listen, Melissa,” he said. “Let’s take a break for a minute, okay? Why don’t you watch some TV or something?”

“What’s the matter, Parker?” she asked. “ ’Fraid I’m going to stage a comeback?”

“Naw,” he replied, “I’m really just not in the mood for War right now. I’ve got other things on my mind.”

Should I tell her? he wondered. It’s not that big a deal. But what did he have to lose?

“Well, practice was kind of rough today,” he began. “Everyone was on my case over my stupid helmet.”

He told her about getting razzed by the guys for leaving it on the sidelines. That wasn’t too bad, he pointed out. But then
he described what
happened at the equipment room and the coach’s reaction. He didn’t mind having to do the extra laps, he confessed. It was
the coach’s attitude that hurt.

“And that’s the whole story?” she asked.

“What is this, the third degree?”

Melissa swept the cards up from the table and began to put them in their box.

“I don’t know why you’re so surprised the coach didn’t believe you. You know, Parker, you’re not exactly famous for telling
the truth,” she said in her smug, ten-year-old, matter-of-fact voice. Just the sound of it bugged him.