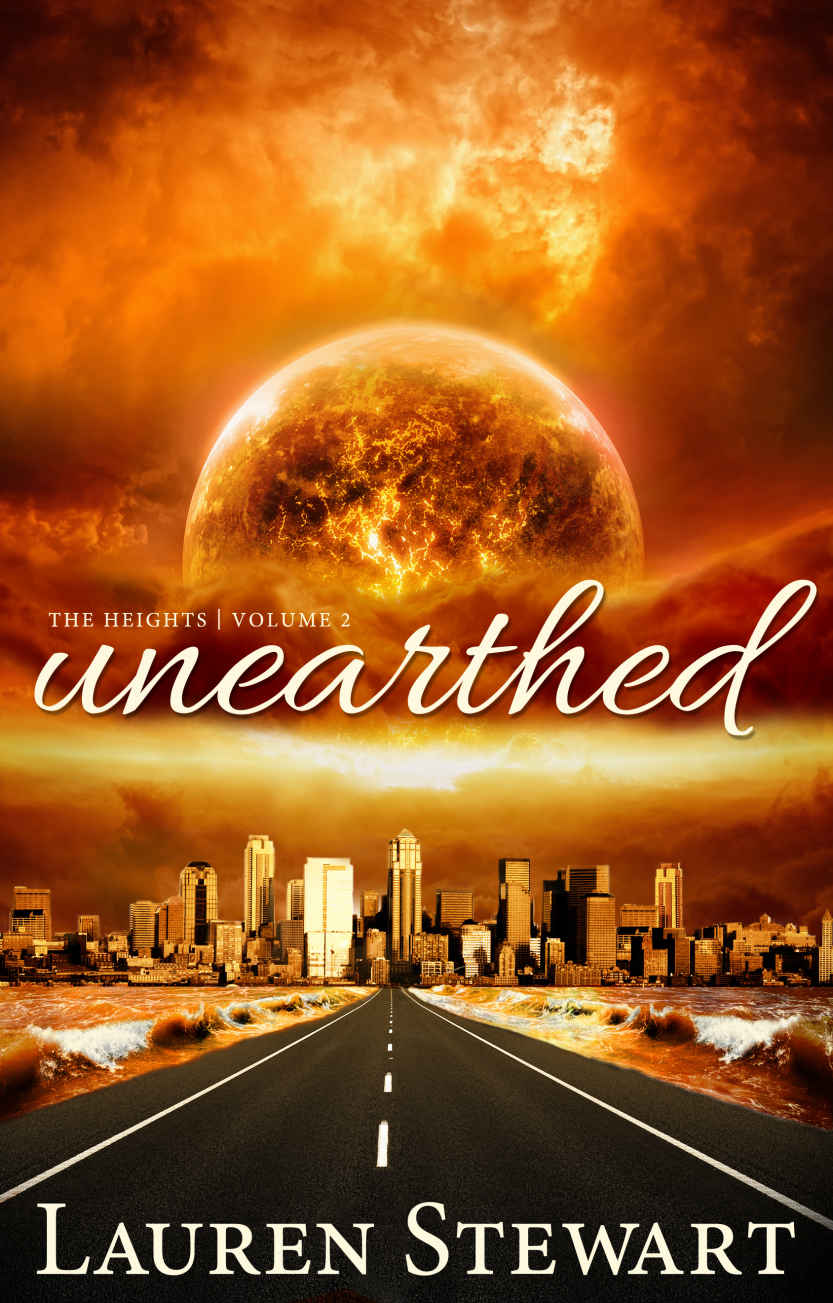 Off the Hook Publishing

Other Titles by Lauren Stewart

Darker Water, Once and Forever #1

Key Characters in The Heights

Davyn
(level-one demon) works as a mercenary and, after guiding Rhyse through hell, was gifted with an additional six-months ‘above the crust’ before he must return to hell to be remade.

Keira
(seer) was Lamere’s prisoner, victim, and plaything for three years. Now her only goal is to kill the vampire who left her with abilities beyond any of her kind and who almost destroyed her in the process.

Addison
(dat vitae) is the sole member of a race whose blood can strip supernaturals of their power and create humanity where there once was none. She has given up her life and her love to become the reluctant leader of a rebel group of seers.

Rhyse
(vampire) uses his position as Prime of the North American zone to prevent the Highworld from crumbling before a better world can be built. To protect the woman he loves and allow her do what is in her heart, he must sacrifice his.

Micah
(angel) guides new seers into the Highworld and, by accident or destiny, has been drawn into Addison’s fight. Though he is forbidden to take part, he finds himself stretching the boundaries between his role and what he believes is right.

Parker
(seer) walks a fine line between her role as an assistant historian in the Heights and a secret ally, confidante, and friend to Addison.

Graham
(seer) sacrificed his strength and immortality to prevent a war. He is now charged with protecting the same woman whose blood stripped him of his vampiric power and left him with all the weakness of a human.

Lamere
(vampire) secretly played with and used Keira for years before she escaped his dungeon. He became the hunted after defying Treaty law that forbids the creation of new vampires.

Drinod
(lower-level demon) was summoned from the depths of hell and offered freedom. With nothing to lose and a lifetime to gain, he took Lamere’s deal.

Nadine
(seer) hunts down rogue supernaturals and helps other seers escape the abuse of the Heights.

Logan
(seer) is no longer a toy—a sex slave for any super who could afford him—but he’s still not free. He now works as an assistant to Rhyse, passing messages between the Prime and Addison, waiting impatiently for his role is the Rising to finally be revealed.

Tempest
(vampire) was chosen to replace Graham as Rhyse’s Second because of her far-above-average skill at wiping and reading minds. But her youth and loyalty leave her blind to the dangerous game Rhyse is playing.

Noah
(seer-turned-werewolf) was shipped off to live with a pack out of state after being bitten by a werewolf. He’s lost everything he had, everything he knew, and everything he was, with no explanation or empathy.

The Heights (Highworld)
— the paranormal world embedded within the human world. Each zone has a Council led by a Prime who makes decisions for the entire zone, within the structure of the Treaty of All Races, and sees that the Treaty’s laws are being followed.

The Prophecy of the Rising
— a being of a race long forgotten will appear to turn the Highworld on its axis. The so-called “lower races”—those who carry no innate magic—will rise and regain control over their own destinies and will no longer serve the magical.

Treaty of All Races
— a treaty signed by the leaders of each race three centuries ago. The Treaty stopped the wars between the races, the relentless slaughter of humans, and the uncontrolled creation of more predators.

Seer
— a human who, as a child, died and then came back with the ability to see through the “glamour” that supernatural beings cloak themselves and their world with. At eighteen, they are required to join this world and are placed in jobs that allow the Heights to function and remain hidden. If they rebel, or go “rogue,” they are considered too great a threat to the continued secrecy of the Highworld and are killed on sight.

Characters, races, and world facts will be added as they are presented in the series.

For more information on these characters, this world as we know it, and how the series will work, visit my website.

Want to know what Micah, Rhyse, Noah, Tempest, and others are up to while Davyn and Keira get into trouble?

Sign up for my newsletter to get your
FREE
first look at
Beyond the Heights
.

You’ll also be able to get a copy of my novella,
Second Bite,
as well as find out about new releases, book sales, and giveaways. Lots of good stuff going on, so check it out!

For everyone who made this book possible—readers, writers, bloggers, designers, editors, family, and the guy at OfficeMax.

We only get one shot at life. Thank you for helping make mine so incredible. I hope I can return the favor. Except the guy at OfficeMax—he needs more help than I can manage.

The Heights is a big world, so feel free to refer to the key character “legend” for a list of the names and positions of all the main characters, as well as info on the Heights, seers, and the Treaty. You can access the legend from the table of contents in your drop-down menu. However, please make sure you bookmark where you are in the novel before you go to the list, so your e-reader doesn’t lose your place.

“…I say a good love is one that casts you into the wind, sets you ablaze, makes you burn through the skies and ignite the night like a phoenix; the kind that cuts you loose like a wildfire and you can't stop running simply because you keep on burning everything that you touch! I say that's a good love; one that burns and flies, and you run with it!”

“I think I’m getting the hang of this leader shit.” So what if Addison couldn’t sleep, barely ate, and felt like the walking dead all the time? What mattered was that the only people who were
actually
dead were supposed to be. With the help of a few brave people who trusted her with their lives, she’d found a way for seers to escape the Heights.

Just over here changing the world
. Yeah, she and Parker had been doing a lot of high fiving and back patting lately.

After locating seers who wanted out, scouts helped them stay underground until they could get to Addison. Then, just a couple drops of her blood later, the supers couldn’t sense them anymore. They said goodbye to the Heights and hello to regular human lives.

The downside was knowing the Heights existed—vampires, demons, werewolves, fae—but not being able to see them. It made the decision more difficult and less popular—to never know if a future boyfriend or boss was only pretending to be human. Or if they were being hunted as a super’s legal kill.

Addison held her phone to make sure she wouldn’t miss the call. The Rising’s biggest rescue mission yet—an entire toy box full of seers. Rhyse had assessed a lot of the boxes for abuse, but even the Prime of the North American zone had to follow political protocol and avoid doing anything suspicious. An immortal’s timetable was too slow and required too much patience. Thankfully, Addison and the Rising weren’t restricted by stupid things like rules or common sense.

Even though Parker was right, Addison was too tired. Happy, but too tired. She wanted to be well rested when Rhyse got back from the European zone. It had been a long time since they’d seen each other, and she’d been primping like a teenager for a week.

She’d even rescheduled tonight’s exodus so she’d be able to impress him with how much they’d accomplished. She needed that—to hear him tell her she did the right thing, made the right choice. Prove to him that this was worth the sacrifice both of them made when she left him.

“You guys go ahead without me. I felt a hair on my leg earlier, so I gotta take care of that right away.”

“You’re not going to have any skin left if you don’t stop waxing and loofahing. And how happy is he going to be if you bleed all over him?” Parker half-heartedly laughed. “You’re too stressed. Come out with us and celebrate your brilliant leadership.”

Addison was right in the middle of prepping another refusal when the door flew open and crashed into the wall. Graham stalked into the room without a word. Majorly out of character for the guy who had shown up one day, just like any other seer who wanted to join the Rising. Yeah, right. More like he was a gift from Rhyse, although neither man would ever admit that. Graham had decided to stay human for a little while and guard the body of the only certifiable dat vitae in existence. Lucky for her, considering how beloved by everyone she was. Everyone but all those who would love to rip her to shreds, that is.

Just because she was the unfortunate idiot who people seemed to think that damn prophecy was about. Seriously? Sure! In fact, the first thing she thought when she looked in the mirror every morning was:
Now, that chick looks like someone who could lead a rebellion and turn the supernatural world on its axis, freeing seers from servitude and keeping all the humans of the world safe. But she should probably get a haircut first.
Yeah, right.

“Geez, Graham! What if I was naked?” She didn’t expect a laugh, but a flicker of recognition would’ve been nice. Their relationship had its awkward moments, lots and lots of them, probably because she’d been the one to de-vamp him. If “de-vamping” was a thing. Or “de-shifting.” She’d done a lot of “de-witching” not too long ago, so she was pretty good at that.

“What happened?” It was as if Parker’s smile had never existed. She always seemed to understand Graham better than Addison did.

“Take what you need, and let’s go.” His eyes didn’t leave Addison’s. His expression never changed. She finally noticed how tired he looked, his dark hair wet with sweat.

Oh no.
She knew it. Things had been going too well. Too easy. She wasn’t a real leader. Graham knew, and so did Parker when she wasn’t being overly supportive. They wouldn’t be able to deny it anymore, because Addison knew she’d just sent one of her people to their death.