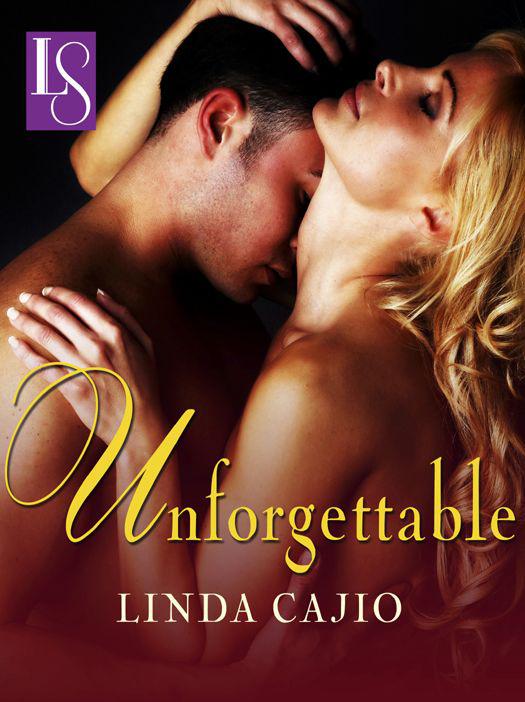 Unforgettable
is a work of fiction. Names, places, and incidents either are products of the author’s imagination or are used fictitiously.

Published in the United States by Loveswept, an imprint of The Random House Publishing Group, a division of Random House, Inc., New York.

L
OVESWEPT
is a registered trademark of Random House, Inc.

Unforgettable
was originally published in paperback by Loveswept, an imprint of The Random House Publishing Group, a division of Random House, Inc. in 1989.

Anne Kitteridge forced the army of sensual butterflies in her stomach to calm as she watched the man on the sleek polo pony. The polo game had been fast and furious for three quarters, and despite the cool spring day, his white knit shirt was plastered to his body, outlining every muscle of his shoulders and back. They led into a flat waist and narrow hips. Strong thighs bulged as he gripped the sides of the galloping bay gelding. The strength in his arms was obvious, and she had an unwanted urge to feel them around her in a tight embrace. Intent on the ball, he kept his lean six-foot frame crouched low on the animal’s shoulders. She knew the polo helmet hid thick, light brown hair, vivid green eyes, a Robert Redford jaw, and a Cary Grant smile.

He rode hard past her on a drive to the goal, and she drew in her breath when he rose out of the saddle to hit the ball. He had a perfect backside too.

If only she hadn’t seen James Farraday on a horse, she thought, sighing. He was thirty-five, single, and from one of Philadelphia’s foremost families. Playboy material. She had known him all her life, although she had seen him only occasionally since her return from California five years before. She went out of her way to keep their meetings to a minimum. But his grandmother and hers were close friends, and when she and James were children, the families had hoped they would marry someday.…

Anne swallowed. She hadn’t allowed herself to think of that in years. Not since she was seventeen when she had made a fool of herself with him. Then she’d proceeded to make a mess of her life. She was all grown up now—grown up and grown sensible.

It was just the horses, she told herself. Horses were her territory, after all. She had been riding since she could walk; she’d even ridden for a time as a professional jockey. Now she bred race horses for a living. Somehow, though, she hadn’t quite connected that an ability to play polo meant an ability with horses. She knew all too well that at this moment James’s senses were filled with pounding hooves, musky sweat, and hot leather. She knew he was moving with the horse in that unique, almost telepathic affinity between man and equine. She knew his brain and body were absorbed in nature, racing toward contented exhaustion. A throbbing started deep within her and radiated outward until she felt as if she were melding with him on the animal—urging him forward, harder and faster …

As if he had sensed her thoughts, James glanced around at the spectators crowding the sidelines of
the Westgate Country Club’s charity polo match. She instantly turned away before his gaze found hers, mortified that she might have somehow signaled her reaction to him.

She reminded herself she had an intense distrust of “perfection.” And for her own good, it had to stay that way. Really, she thought in disgust, she was a thirty-one-year-old single mother and businesswoman. Much too old for such a silly adolescent reaction to a man.

This was the first and last time her grandmother would talk her into attending a tailgate party/polo game, Anne decided. Usually she was more resistant to the social functions Lettice wanted her to attend, but she hadn’t been to one for a while. This one had horses, and she’d allowed Lettice to prevail. Horses … and James. She slipped her arms out of her collarless green tweed jacket. Funny, she mused, how the March day turned quite warm suddenly. Her yellow linen shirtwaist even seemed too heavy.

Across the small table from her, Lettice Kitteridge lowered her binoculars and smiled with satisfaction. “James is in top form. Very top form.”

Lord, Anne thought with amusement. He even had her grandmother drooling. No mean feat, if one knew Lettice. But James probably had every woman there panting. He usually did.

She glanced over at the furious play farther down the field, then shrugged as nonchalantly as possible. At least she could show a natural interest in the other players.

“He’s got a wonderful horse,” she said, pleased with her casual tone. Her insides were still pulsing with heat. “His string of ponies is magnificent.”

Lettice fixed her granddaughter with what was known in the family as the “regal” eye.

“Bull,” Lettice said, rapping the table with her hand. The discarded luncheon china and crystal rattled in response. “And who sighed when he rode past? A totally feminine sigh that had nothing to do with horses, I might add.”

Anne cursed under her breath at her grandmother’s acute hearing. She glared back in defiance and lied. “How would I know?”

“Well, it wasn’t me,” Lettice said. “And it certainly wasn’t Philip.”

Anne turned around and looked at her nine-year-old son, perched on the back end of her Jeep, parked behind them. His small body was tense and still as he watched the game. Clearly, he was enraptured.

“Are you sure it was a female sigh?” Anne asked, grinning.

Lettice glanced at the boy, then smiled reluctantly. “Yes, I’m sure, but I won’t argue the point.”

“For once,” Anne muttered.

“I doubt you’ll admit to it anyway,” Lettice added. “I do wish, though, you hadn’t been so stubborn about marrying James.”

Anne jerked at the sound of her deepest thoughts coming blithely from her grandmother’s lips. So much for a change of subject. She was determined to hold her patience with Lettice, however. The game was almost over, and she could go home to the safety of Makefield Meadows, her stud farm outside Washington’s Crossing, released finally from this torture. Still, she couldn’t allow Lettice to harbor such a dangerous notion.

“Grandmother, there was nothing to be stubborn about—”

“You two were a perfect match,” Lettice went on, oblivious. “I’ve always thought so. I have never
understood why you just couldn’t give things a chance.”

“Help me, Lord,” Anne murmured. A “perfect match” was the last thing she and James would ever be. She’d had one disastrous match with a Hollywood producer who had also owned horses. After that experience she wasn’t about to go for two. Besides, James had made his feelings for her all too clear many years ago.

She shrugged again, trying to seem uninterested. “Since our families are friendly, I’m sure you all thought it would have been nice. But I’m not very … conventional, Grandmother. Or acceptable. You know that.”

Anne smiled at her grandmother’s pronouncement. As a child she’d overheard too many catty comments about her father marrying his secretary not to know differently. Being a Kitteridge hadn’t made her mother “acceptable.” Fortunately, her parents hadn’t cared. They just went happily along continuing to publish
The World
, her father’s travel magazine. Unfortunately, their daughter had always felt a little like an outcast.

“Still,” Lettice continued, obviously finding an opening, “why you ever insisted on becoming a professional jockey, or marrying that bas—”

“Grandmother,” Anne warned, glancing at Philip. Although she thoroughly agreed with her grandmother’s opinion of her ex-husband, Ellis Crawford, she didn’t want it said in front of her son. Philip’s hearing aid picked up more than people thought. But she needn’t have worried. Philip was in pololand.

“Well, now you breed horses,” Lettice said, changing gears slightly. “Unfortunately, you won’t do it from a desk as others do.”

“It’s no fun that way,” Anne said, grinning. She sobered and added, “It took me a long time to accept that I’ll never fit in with this.” She waved a hand at the picnickers enjoying the Sport of Princes. “I’ll never be Ellen. She was born with the silver spoon. I wasn’t. I like who I am, and I like what I do. I’m sorry if that disappoints you, Grandmother.”

Lettice harrumphed. “You have never disappointed me, child. It’s just that you seem to be deliberately eccentric. But you are more like Ellen than you know.…”

Anne laughed. Her cousin was beautiful, always poised and elegant. She had no illusions about herself, however.

“But you’re steering me away from the meat of the matter.” Lettice raised her eyebrows. “So, my girl, you’ve never considered marrying James because you think you’re unsuitable.”

“Grandmother!” Anne exclaimed at the outrageous notion. “That’s not at all why—”

“Then if you do think you’re suitable, why haven’t you gone after him?” Lettice demanded.

“Why should I—” Anne clamped her lips shut. This conversation was losing all semblance of reality. “Grandmother, James and I have never ‘clicked,’ okay? I threw up on him at my christening. That set the tone of our ‘relationship’ ever since. Haven’t you noticed we rarely see each other as adults? I have too many reasons not to get involved with anyone. And James … Well, anything else is just wishful thinking on your part.”

The game ended just then, and the cheers of the crowd drew their attention. The score showed that James’s team had won. It figured, Anne thought. James, like her cousin, Ellen, fit in effortlessly.

So even her son was enamored … and right. She smiled at Philip. “You liked the game.”

She hesitated for an instant, then nodded. The makeshift stables were about one hundred yards behind the game field. “Be back here in twenty minutes. The stable’s a temporary setup, so be careful.”

Philip snorted. “I know how to be around a stable, Mom.”

Philip scrambled out of the Jeep and disappeared into the crowd. Anne suppressed a ripple of anxiety for her son. Near deafness in one ear was hardly cause for maternal overprotectiveness, and she knew it. But she had never quite rid herself of that twinge of worry.

“It’s good that you don’t fuss over him,” Lettice said. “But he’s a quiet boy. Sometimes too quiet, I think.”

“I know. He needs more confidence.” She was trying hard to encourage that in Philip. It was one of the reasons she had let him go just now. California had done its damage. She only hoped it wasn’t irreparable.

On the field, the players shook hands with one another, then turned their tired horses toward the stables. Anne had settled back in her lawn chair as they rode past, but Lettice stood up and waved. To Anne’s horror, she called out, “James! Stop a moment and have some victory champagne!”

Artist's Dream by Gerri Hill
The Happy Hour Choir by Sally Kilpatrick
Jupiters Travels: Four Years Around the World on a Triumph by Ted Simon
Hanchart Land by Becky Barker
Damned and Desperate by Tara West
Simply Heaven by Patricia Hagan
Beyond the Sea by Emily Goodwin
Dora: A Headcase by Lidia Yuknavitch
Deep Throat Diva by Cairo
Just Another Day by Steven Clark