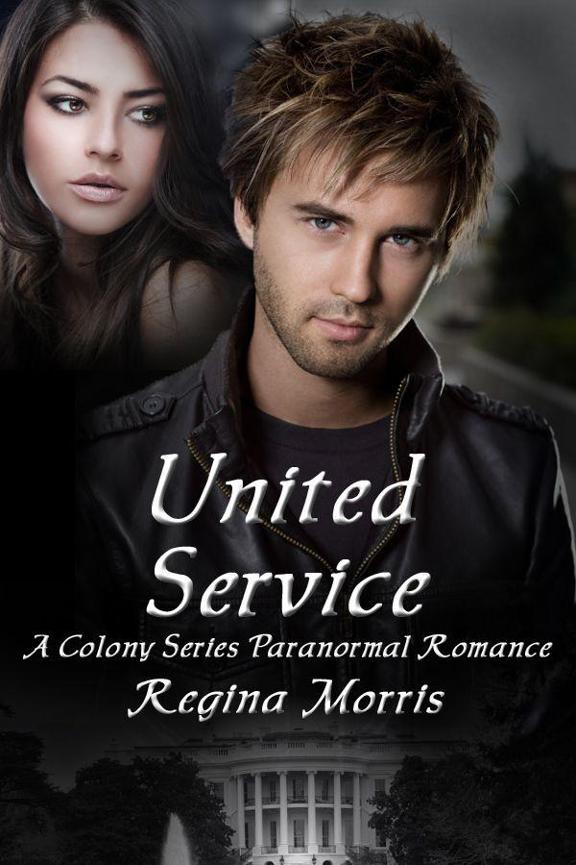 A group of sexy vampires protect the President of the United States in this humorous paranormal series.

Vampires exist among us. They can be our neighbor, best friend, our child's teacher ...

They alter their aged appearance based upon the amount of blood they consume. They move to a new area, drink a lot of blood, and appear young. Slowly they limit their intake of blood and age, right in front of our unsuspecting eyes. After decades, they fake their death, move, and do it over and over again.

Most live quiet lives in an effort to blend in. Some however want power and control. The Colony is an elite group of vampires sworn to protect the President of the United States from these rogue vampires.

Sterling, a half-breed vampire, is the weakest link in the chain for his team, and he knows it.

He has a unique ability to glean information from inanimate objects, and his life is like CSI meets the West Wing, where key positions are held by vampires. Vampires can alter their age based on the amount of blood they consume, which should allow Sterling to blend into human society. However, his ability has painful side effects that cause him to live a lonely life down in the evidence room at FBI headquarters. He's a lonely bad-boy looking for love in all the wrong places.

His current case involves the kidnapping of vampire children by a religious cult who is trying to save them. Sterling snatches the opportunity to do some field work by teaming up with a purebred vampire, Kate, who is the nanny of one of the missing children. Sterling's world is turned upside down by Kate. She is everything Sterling could hope for in a mate and he wonders if she'd ever consider loving a half-breed.

Kate is beautiful, intelligent, charming and sophisticated. Kate has led a sheltered life and is considered handicapped by vampire standards. Could she possibly trust Sterling enough to share her dark personal secret with him?

Together, can they save the kidnapped children and find true love for themselves?

This novel is for individuals 18+ years of age as it contains sexual content. It is a humorous romance and should not be considered a political thriller. Although there are references to the President, presidential procedures, the White House and Washington DC, the political arena is a backdrop for the romance. With that said, there is action and suspense in the novel that adds a dimension of excitement to the hot romance.

All rights reserved. No part of this book may be used or reproduced in any manner without the written permission of Regina Morris with the exception in the case of brief quotations embodied in critical articles and reviews.

This is a work of fiction. All of the characters, organizations, places and events portrayed in this novel are either products of the author’s imagination or are fictitiously used. Any resemblance to actual persons, living or dead, business establishments, events, or locales is entirely coincidental.

Silkhaven Publishing, LLC does not have any control over and does not assume any responsibility for author or third–party Web sites or their content.

The scanning, uploading, and distribution of this book via the internet or via any other means without the permission of Silkhaven Publishing, LLC is illegal and punishable by law. To obtain a copy of this novel, please purchase only through authorized electronic or print editions, and do not participate in or encourage electronic piracy of copyrighted materials.

Vampires exist among us.

They can be our neighbor, best friend, our child’s teacher …

They alter their aged appearance based upon the amount of blood they consume. They move to a new area, drink a lot of blood, and appear young. Slowly they limit their intake of blood and age, right in front of our unsuspecting eyes. After decades, they fake their death, move, and do it over and over again.

Most live quiet lives in an effort to blend in.

Some however want power and control.

The Colony is an elite group of vampires sworn to protect the President of the United States from these rogue vampires.

Gentle rain drizzled on Sterling’s nude body like healing kisses, renewing his sense of self–peace. His headache had subsided a little, but in truth, the ache always persisted. The pain was just more manageable now. Sterling reclined on the patio chair, his body dwarfing the size of the furniture as he stretched to wake up in his solitude. His skin chafed against the chair, feeling slightly sunburned. He opened his eyes to a cloudless sky and cursed as the sun blinded him . . . No more relief would come today.

As a half–breed vampire, he didn’t have the protective inner eyelids the purebreds had, so he closed his eyes against the sun. He thought of the day’s schedule. He knew he would spend most of his time down at the penitentiary. He groaned because every time he visited the place, his body ached. It wasn’t being around humans that did him in, but rather, the physical touching of evidence. His ability to get information from inanimate objects proved helpful in solving cases, and he was happy to help. But his body always paid the price, and he detested the side effects.

Sterling’s touch would tell him everything he needed to know about the item’s owner, what it was used for, and the feelings and emotions surrounding the item. Each touch would make his skin crawl and itch, and the more he touched, the more his skin would scream in agony. After a few hours, his head would pound with a migraine.

But the pain meant nothing; it was just one more damn thing about his human half he had to deal with. Most vampire abilities had good side effects, but it was just his lot in life to be cursed. Fortunately though, his ability did allow him to bring some of the sickest and most depraved criminals to trial, and that was the justification he needed to keep living his lonely life.

He squinted at the sun again as he reached for his sunglasses on the ground beside him, and sat up. The private sleeping porch of the Mansion was his little oasis, and his alone. No one would disturb him while he healed and sat in his solitude at his home, which everyone jokingly called Fang Manor.

Solitude and loneliness were only separated by a thin line. A very thin line — and he knew the feeling all too well.

Sterling inhaled deeply, taking in the crisp morning air. He heard the chirping of the songbirds nearby and the wind chime down below swaying in the breeze. Cursing softly, he realized he could also hear his father with his new wife stirring in their bedroom, next to his sundeck.

It was time to get up. The mansion’s walls weren’t soundproof, and he now tried to block out a conversation which had changed into more intimate noises.
“Newlyweds,”
he thought as he rolled his eyes. No way was he listening to an encore of last night. There wasn’t anything Oedipal in his distaste of the noise; it just reminded him how powerless he was to find a wife of his own. He had failed to secure an arranged marriage, and his own attempts to find a purebred vampire mate had proved unsuccessful, many times over.

He stood, scooped up rain pooled on the chair beside him, and splashed it on his face. Shaking the water from his shoulder length hair, he moaned contently at the soothing touch. He knew this moment would be the last time he would feel good all day.

Checking his rain catchers, he poured the collected rain into bottles to be used later. Sterling then walked through the few puddles of rainwater which sat on the stone floor of the deck. He opened the glass door and entered his private bedroom. He had chosen the decor himself. The cherry wood king–sized bed with matching nightstand and dresser filled the room. A hunter green duvet, with burgundy and gold pillows, in various sizes and shapes, were at the head and foot of the bed. An old gold cross, which he had inherited from his human grandmother, hung on the wall above the bed. As pleasant as the room was, Sterling spent little time here, even though this house had been his home for too many decades to count.

He lived here with his father, stepmother, aunt, and several team members, making up “The Colony”, a special operative team of vampires employed by the federal government to protect the President and the American way of life. Sterling was one of the founding members of the Colony, which had been established in 1866, after the assassination of President Abraham Lincoln. It was really the only life Sterling knew. The job had benefits and perks, but also pitfalls. But what job didn’t?

Sterling glanced around the room. It was a gilded cage with free room and board, paid for by Uncle Sam. Sure, he loved his family, and Fang Manor was a far cry from slumming it, but because of security measures he could never entertain guests at the place. A wife could live here with him, if he had one. A girlfriend? Hell, he never dated a woman longer than, well, an hour tops. And even then, the women were humans.

Speaking of human females, he was hungry, and there wasn’t one in his bed at the moment. This is exactly why he kept an apartment in the city.

Damn. His fangs were already extended, expecting to eat. It was time for plan B. He shook his head as he walked across the room. Next to the air purifier on the floor sat a small personal refrigerator. He opened it and pulled out a bag of AB negative blood. Bagged blood. Not his favorite, but at least the food was free. He poured some into a mug and warmed it in the microwave which sat atop the refrigerator. It took only a minute for him to down it all after the microwave beeped. There was no reason to savor bagged blood. Honestly, no reason at all. The packaging, for starters, was all wrong.

The dried rain still clung to his skin. Not wanting to wash it off, he skipped a shower. In his private bathroom, he stared at his blurred reflection in the mirror. One corner of his mouth turned up in a half grin, as his reflection reminded him of the vampire lore that Hollywood messed up in their movies. Hollywood did get the mirror reflection right though. Thanks to the silver in mirrors, and even the silver in the old fashioned photography, vampire images were always obscured.

The Perfect Retreat by Forster, Kate
The Shores of Death by Michael Moorcock
On the Back Burner by Diane Muldrow
Scaramouche by Rafael Sabatini
Wild Action by Dawn Stewardson
View from Ararat by Caswell, Brian
Slavers of the Savage Catacombs by Jon F Merz
Curse of the Undead Dragon King (Skeleton Key) by Konstanz Silverbow, Skeleton Key
A Soldier for Keeps by Jillian Hart
Changing Hearts by Marilu Mann