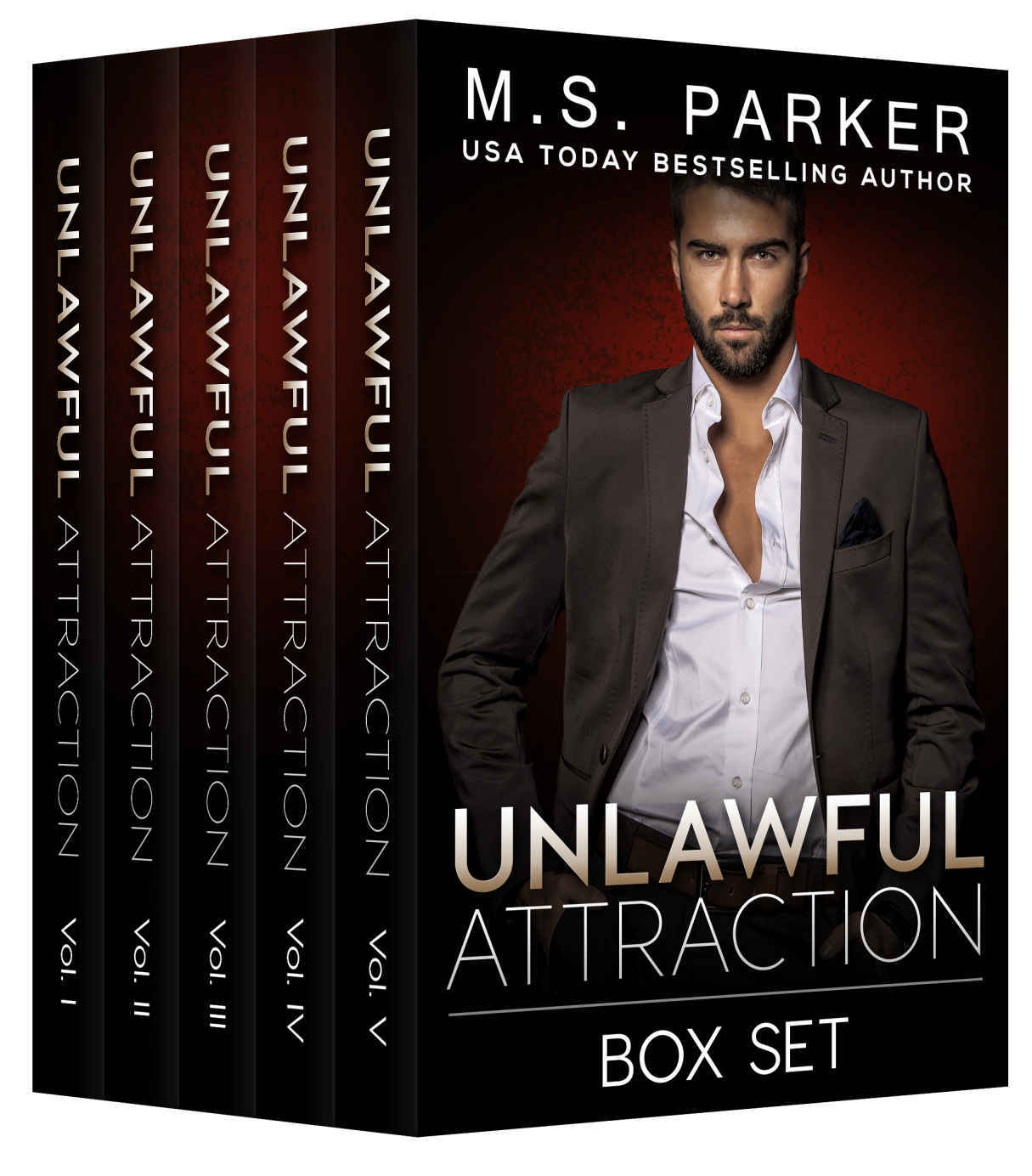 All Box Sets From MS Parker:

This book is a work of fiction. The names, characters, places and incidents are products of the crane writer’s imagination or have been used fictitiously and are not to be construed as real. Any resemblance to persons, living or dead, actual events, locales or organizations is entirely coincidental.

The woman in the mirror looked back at me with pale gray eyes that matched the suit. It was a good suit, one I wore when I needed to look at least close to my twenty-six years, or when I wanted to look my best. Since today was my last day at Webster & Steinberg, it was my only choice.

I couldn't believe it was finally here. I’d gone through the follow-ups with my biggest clients and handled the ones who needed to be gently handed off to the woman who’d fill my shoes. They'd all been sorry to see me go, but not as sorry as my boss. I'd be the fourth lawyer she lost in a little over a year. The other three had been friends of mine, and their absence here made leaving a bit easier.

I thoroughly expected to get through the day without anyone really noticing and I'd managed it up until a few minutes ago when my co-workers had sprung a surprise going-away party for me. Surprise because I wasn't really that close with any of them. Without Leslie, Carrie and Krissy here, I'd mostly kept to myself. I wasn't shy or a snob, but I liked to focus on my work, and they'd been the only ones who'd ever really managed to keep me from being a total workaholic.

The bathroom door swung open and I leaned forward to finish checking my make-up. I hadn't cried because I didn't do that, but I had gotten a bit teary and I wanted to make sure nothing had run.

Emma smiled at me as she came in. “Don't think for one moment we're going to let you hide in here.”

I gave her a small smile. “I thought for once you guys wouldn't make a big deal of things.”

“You’re such a sweet kid, believing in fairy tales.” She winked at me before disappearing into one of the stalls.

I laughed and affably called her a bitch before stepping back from the counter. With my white blonde hair chopped into a short pixie-cut and my petite frame, I looked years younger than I was, which meant I spent plenty of time being referred to as a 'kid.' Instead of letting it bother me, I usually took advantage of people underestimating me.

“By the way, Dena, one of the partners came down to tell you good-bye. Better get out there,” she added.

Sighing, I pushed away from the sink. “Why would they want to do that?” I'd already said good-bye to my boss, Mimi. She wasn't a named partner, but rumor had it she would be by the end of the year.

Emma answered my question, “Probably because you know exactly when to go for the balls and exactly how hard to squeeze. You’ll be missed. For your ability to squeeze balls if nothing else.”

I rolled my eyes as I turned toward the door.

Another hour and I’d be done. I both dreaded and anticipated the moment. I’d miss the stability, the familiarity of Webster & Steinberg, but at the same time, I’d been preparing for the step I was about to take for what felt like my entire life.

As soon as I stepped out of the bathroom, scents of food assailed me from the break room. My belly started to rumble almost immediately. They’d kept me running all day, so when I hadn't been finishing up with my clients, I'd been handling busy work or running errands, even making calls that generally the interns would've handled. I hadn't thought anything of it since I'd known I couldn't take on anything new.

Now I saw they’d kept me busy so I wouldn’t figure out what they were up to. It also meant I hadn't had a chance to eat lunch. Most people thought that since I was barely five feet and maybe a hundred pounds that I didn't eat much. That wasn't the case, and I was seriously hungry.

As I stepped into the break room, the decorations hit me all over again. The entire room was done up in streamers, and on the far wall there was a sign with bars that read
Put ‘em away, Dena!
Behind the bars, it showed the scruffy, tired face of a man glaring sullenly at the camera.

Two weeks ago, I’d accepted a position as an assistant district attorney. I wouldn’t be arguing the big cases or anything. Not for a while yet, but at least I had the ever important foot in the door. Once I'd proven myself, I'd get to start on the big stuff.

At the question, I looked over at Lori Martin, the attorney the firm had hired to take my clients. Since Leslie had left a couple months back, I carried too heavy a load to just shunt my cases off onto others in the firm. The divorce business was booming.

For as long as I could remember, this was all I ever wanted to do. Some little girls grew up dreaming about being a nurse, a doctor, a teacher. Not me.

A friend of mine from high school had majored in archaeology. That had been her dream ever since she’d been a kid. Working in the garden with her mom one year, she’d found a bone and in her child’s mind, it had been a bone from some rare, undiscovered dinosaur. In reality, it'd been a dog’s hind leg, but that hadn’t mattered in the long run. It sparked her interest and she'd gone for it.

I’d always wanted to be a lawyer. A prosecutor, to be specific. Working at Webster & Steinberg had only been a stepping stone.

Unfortunately, I didn’t have some fun little story about why I'd decided I wanted to put bad guys away. My desire had come from tragedy.

Late one night, more than twenty years ago, sirens had woken me. I’d crawled into bed with my parents and gone back to sleep. As a child, that wailing sound had been common enough in my neighborhood.

The next morning, both of my parents had been unusually quiet. My father had gone to work like usual, but Mom stayed home with me. When I asked her why my sitter hadn't come yet, she told me my sitter had gone away. I persisted, but all she'd say was that Miss Jenny was gone and I'd understand when I was older.

The problem was, I'd always been a precocious child, too nosy for my own good, and I discovered the truth myself a couple of days later when I'd seen a newspaper with a picture of Jenny.

Mom had come in when I'd been sounding out the headline.

She’d tried to take the paper away, but I’d already figured out enough of the words to ask the question.

My mother had softened the blow as much as she could, but how could anything about murder be soft to a four year-old? I'd understood sick and old, but I'd known Miss Jenny hadn't been either one of those.

Mom told me that the man who'd killed Miss Jenny had been a different kind of sick and that he hadn't meant it. My childish mind had accepted that, but I'd come back to her explanation years later when the older sister of a boy in my class had been murdered. At twelve, I'd been old enough to read the stories in the newspapers and online. And I'd been old enough to research when I recognized the name of the man's previous victim.

That’s when I'd found out that Jenny's killer had been an ex who'd beaten her before. That he'd been arrested with her blood still on him, but a defense attorney had found a loophole that had let the murderer go free. Free to kill my classmate's sister.

That was when I'd decided what I wanted to do with my life. I wanted to be the one who made the bad guys go to jail.

My excitement must've been showing on my face when I walked into Club Privé that night. My friends were already waiting for me at our regular table, Carrie's and Krissy's men at their sides. Carrie and her extremely rich and hot fiancé, Gavin Manning, ran the club together and they were almost sickeningly in love. Not that Krissy and her equally gorgeous and wealthy man, DeVon, were any better. They both lived on the West Coast, but DeVon was rich enough that he and Krissy came to visit as often as possible.

I hugged Leslie first as she stood to push out my chair. Krissy was next, and then I was in Carrie's arms for a quick, but heartfelt embrace.

I didn’t have a chance for anything more than that, though.

Carrie's eyes narrowed as she released me. “You’re up to something. It's written all over your face, Dena. Tell us. What is it? Tell us.”

Shit. I'd forgotten how intuitive the two of them could be. Even Leslie was looking at me with suspicion, and she usually let me alone.

“You're right, Carrie,” Krissy agreed, nodding sagely. “You’re up to something, Dena. I know that smirk. What's going on?”

I reached for the glass of water in front of me and took a sip, trying to buy time. I didn't want to just blurt it out. These three women were my best friends, the closest things I'd ever had to sisters. They would understand why this was so important to me.

In those brief seconds, Krissy took over, falling easily into her usual role within the group. Her dark eyes glinted as she propped her elbow on the table. Chin in hand, she asked, “Did you meet a guy? Say you met a guy. Tall and blond, or dark and mysterious?”

“Both?” Leslie wiggled her eyebrows suggestively. At least with her there, I wasn't the only single one.

With a snort, I glanced over as a woman stopped by to check on our drinks. I put my order in before answering, “No. I didn't meet a guy.” Mentally, I added,
I wish
.

I’d hooked up with a couple men off and on over the past year, but none of them had been worth more than one night. A part of me wanted what Krissy and Carrie had, but it wasn't as easy for me as it was for them.

I wasn't exactly blaming
myself for my single state, but I had certain...quirks that made it hard for anything long-term. Club Privé, ideally, should've made it easier, but in reality, it hadn’t.

There were plenty of good-looking guys – and hell, I wasn’t so shallow that the man had to be a ten. Other things mattered besides washboard abs and a face that looked like he’d been carved by the very hands of Michelangelo. I
did
want somebody I was physically attracted to, but somebody who made me laugh and somebody who
got
me did a hell of a lot more than a pretty face.

And that was where everything got fucked up.