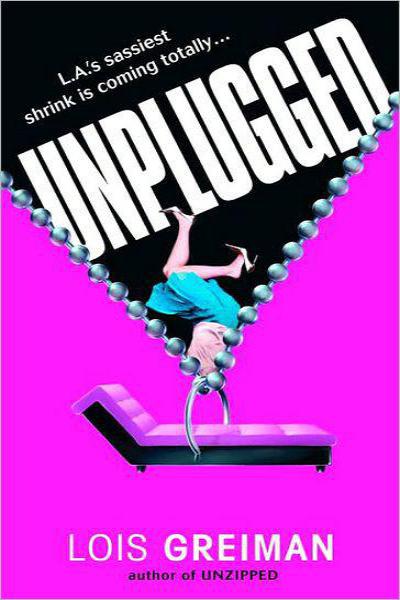 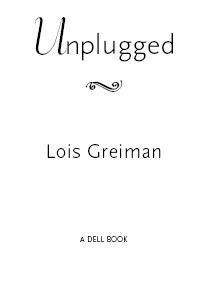 I hope you enjoyed getting Unplugged, ’cuz next we’re getting . . .
UNSCREWED
.

A Special Sneak Peek at Unzipped

To Caitlin Alexander, the only editor
who thinks I’m as funny as I think I am.
Thanks for everything you do.
You’re the greatest.

Matrimony and firefighting. They ain’t for cowards.

I hadn’t known Larry Hunt thirty-five minutes before he popped the question. But the fact that he was scowling at me as if I were the devil’s handmaiden suggested our relationship would never work. The fact that he was sitting beside his wife also posed a problem for our connubial bliss. Weighing all the signs, I guessed they’d been married for about twenty-four years.

But I’m not a psychic. I’m a psychologist. I used to be a cocktail waitress, which paid about the same and boasted a saner clientele, but it kept me on my feet too much.

Two weeks prior, Mrs. Hunt had called my clinic to schedule a therapy session. My practice, L.A. Counseling, is located on the south side of Eagle Rock, only a few miles from Pasadena, but hell and gone from the glamour of New Year’s morning’s Rose Bowl Parade.

As a result of that call, Mr. Hunt now seemed to be wondering how the hell he had landed in some shrink’s second-rate office, and had decided to fill his fifty minutes by probing into my personal life. But I suspected what he really wanted to know was not whether I was married, but what made me think I was qualified to counsel him and his heretofore silent wife.

If he hadn’t been a client, I might have told him it was none of his damned business whether I was married, ever had been married, or ever intended to be married. Ergo, it was probably best that he
was
a client, since that particular answer might have seemed somewhat immature and just a tad defensive. Not that I secretly long for matrimony or anything, but if someone wants to lug salt downstairs to the water softener for me now and again, I won’t spit in his eye. Even my thirty-seventh ex-boyfriend, Victor Dickenson, sometimes called “Vic the Dick” by those who knew him intimately, had been able to manage that much.

“Larry,” Mrs. Hunt chided. She was a smallish woman with sandpaper-blond hair and a lilac pantsuit. Her stacked platform sandals were of a different generation than her clothing and made me wonder if she had a disapproving daughter who had taken it upon herself to update her mother’s footwear. Her eyes were sort of bubblelike, reminding me of the guppies I’d had as a kid, and when she turned her gaze in my direction it was pretty obvious she’d been wondering about me herself.

It’s not uncommon for clients to think a therapist has to be half a couple in order to know something about marriage. I soundly disagree. I’ve never been a lobster, but I know they taste best with a pound of melted butter and a spritz of lemon.

I didn’t have a lot of information about the Hunts, but I knew from their client profiles that Kathy was forty-three, four years younger than her husband, who worked for a company called “Mann’s Rent ’n’ Go.” They both sat on my comfy, cream-colored couch, but to say that they sat together would have been a wild flight of romantic fancy. Between Mrs. Hunt’s polyester pantsuit and Mr. Hunt’s stiff-backed personage, there was ample space to drive a MAC truck, flatbed trailer and all.

I gave them both my professional smile, the one that suggests I’m above being insulted by forays into my personal life and that I would not murder them in their sleep for doing so.

I considered telling him that, despite past relationships with men like himself, I had managed to retain a few functioning brain cells. But that might have been considered unprofessional. It might also have been untrue.

“How long have you two been married?” I asked, turning his question aside with the stunning ingenuity only a licensed psychoanalyst could have managed. It was five o’clock on a Friday evening, and I hadn’t had a cigarette for five days and nineteen hours. I’d counted on my way to work that morning.

“Twenty-two years,” said Mrs. Hunt. She didn’t sound thrilled with the number. Maybe she’d been doing a little math on her way to work, too. “This May.”

“Twenty-two years,” I repeated, and whistled with admiration while chiding myself for overguessing. It was her pastel ensemble that threw me. “You must be doing something right, then. And you’ve never had any sort of therapy before today?”

“No.” They answered in unison. By their expressions, I had to guess it was one of the few things they still did in tandem.

“I don’t believe in this crap,” Mr. Hunt interrupted.

I turned toward him, brilliantly even-tempered, which shows how mature I’ve become. Five years ago I would have taken offense. Twenty years ago I would have called him a wart-faced turd head and given him a wedgie. “Why ever are you here, then, Mr. Hunt?” I asked, my dulcet tone a soft meld of curiosity and caring.

“Well,” I said, “as I’m sure you’re aware, you don’t have to tell me anything you’re uncomfortable with.”

I glanced from one to the other again. Mr. Hunt beetled his brows. Mrs. Hunt pursed her lips. They didn’t really look like they’d be comfortable with much. Maybe a noncommittal, how-was-your-day kind of exchange—if no prolonged eye contact was required.

I cleared my throat. I hadn’t gotten much of a bead on the Hunts yet. But the law of averages would suggest that he wanted more sex and she wanted, well, maybe a nice facial and a one-way ticket to Tahiti. She looked tired. She also looked stressed enough to blow her lacquered curls right off her head.

My current forms don’t ask whether or not my clients have kids, but in the Hunts’ case, written confirmation was about as necessary as soft drinks at a bachelorette party. She had that old-woman-who-lives-in-the-shoe look about her. They’d probably spawned a good dozen of the little buggers.

“And of course,” I continued, “everything hinges on your own specific goals.”

“Goals?” asked Mr. Hunt, and rather suspiciously. As though I were trying to trick him into mental health and conjugal happiness.

“Yes.” I swiveled my chair a little and crossed my legs. I was wearing a ginger-hued sleeveless sheath and matching jacket by Chanel. Buying clothes secondhand at a little consignment shop on Sunset Boulevard, I’m able to dress marginally better than your average L.A. panhandler and can still afford my flax-colored sling-back sandals for $12.95. The shoes matched the ensemble’s piping and did good things to the muscles in my lower legs. I looked fantastic. Who needs a husband when you’re wearing Chanel and look fantastic? “What are you hoping to accomplish with these sessions?” I asked.

Mr. Hunt stared at me with a mixture of irritation and absolute stupefaction. I turned toward Kathy, hoping for a bit more acumen.

“What is
your
main purpose for coming here, Mrs. Hunt?”

“I just . . .” She scowled and shrugged. I got the feeling she might have had quite a bit of practice at both. “I thought it couldn’t hurt.”

Ahhh. A ringing endorsement. Someday I’ll have that embroidered and framed above my desk.

“So you’re not entirely content with your current relationship.” It was a guess, but judging by the anger that rolled off them like toxic fumes, I felt pretty confident about it.

“Well . . .” She throttled the strap of her beige handbag. It was the approximate size of my front door. “No one’s completely happy, I suppose.”

I gave her an encouraging smile and turned to her husband. “And what about you, Mr. Hunt? Is there anything you’d like to see changed in your marriage?”

“Things are okay,” he said, but he was still glaring at me.

I gave him my “Aha” smile, as if I knew something he didn’t. Maybe I did, but chances were, he didn’t care where my house key was hidden or how to wax his bikini line without screaming out four-letter expletives.

“So you’re here just to make your wife happy,” I said. It was a charitable way of saying I knew she’d dragged him in kicking and screaming. Nine times out of ten, that’s how it works. Men tend to think everything’s hunky-dory so long as the little woman hasn’t put a slug between his eyes within the past seventy-two hours. “It was extremely considerate of you to agree to come, then. Is he always so considerate, Kathy?” I asked, and turned toward the little woman.

The change was instantaneous and marked. Her lips flattened into an almost indiscernible line and her eyes narrowed. For a second I wondered if she’d brought a handgun with her. God knows, her purse was big enough to house a cannon and the man o’ war that carried it. Ol’ Larry might want to sleep with one eye open.

“He leaves used Kleenexes in the family room,” she said. Her tone was cranked tight, her knuckles white against her mammoth satchel—as if she’d caught Larry sans pants with the woman in charge of weed whacker rentals.

To the uninitiated, Kathy’s statement might seem like a strange opening gambit, but I’d been around long enough to realize it’s not the sordid affairs that most often end a marriage. It’s the toothpaste left in the sink.
Psychology Today
says,
“The human psyche is a complex and fragile phenomenon.”
Personally, I think people are just funky as hell.

If Snow Hadn't Fallen (A Lacey Flint Short Story) by S J Bolton
The Timeseer's Gambit (The Faraday Files Book 2) by Kate McIntyre
A First Rate Tragedy by Diana Preston
The Priest's Graveyard by Ted Dekker
The Fall of the House of Wilde by Emer O'Sullivan
The Titan of Twilight by Denning, Troy
Trace of Fever by Lori Foster
Estacion de tránsito by Clifford D. Simak
The Other Mr. Bax by Rodney Jones
2nd Earth 2: Emplacement by Edward Vought