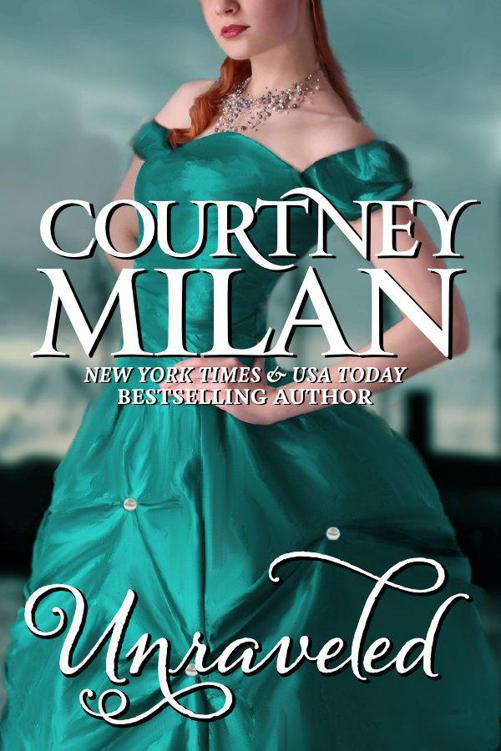 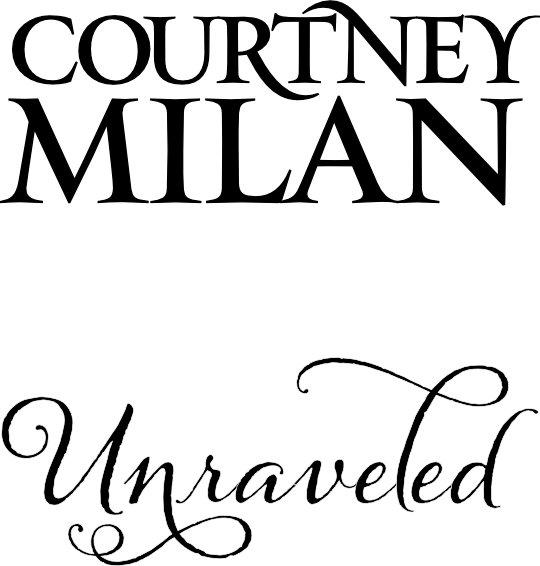 For DKH and KG, who don’t deserve the mention.

And for RG, who does.

“W
ELL,
B
ILLY
C
ROGGINS, WHY
are you here again?”

The petty sessions had already started when Miranda Darling slipped into the dingy hearing room. She ducked her head and contemplated the floor, trying not to attract attention. She was playing a young lady today: posture erect, eyes cast demurely down, elbows at her sides. A young lady wouldn’t fuss with her hair. Especially not to scratch where her wig drove an errant pin into her scalp. Today, her future rested on her performance.

There was a bit of a crowd today, maybe ten or fifteen men and women seated on the wooden benches of the hearing room. Her palms prickled with an edgy energy. She smoothed her hands against the fine muslin of her borrowed gown and counted breaths until the tension inside her faded to a passive lump of nerves.

The white-haired man at the front of the room—Billy Croggins, he’d been called—didn’t seem nervous at all. His face was red, and he shrugged, unembarrassed, at the question that had been put to him.

“Why, Your Worships, I’m here for the same reason I’m always here. I had myself a little bit to drink.” He raised his hand, miming. “I ended up a bit disorderly. You heard what my daughter had to say.” Croggins flashed an ingratiating grin.

He had nice teeth for a drunkard. Miranda sidled down the aisle and slipped into an empty spot in the front. Billy Croggins had a nice nose, too. His white, disordered hair gave him an air of respectable eccentricity. Useful, if you were a layabout.

Nobody noticed her as she arranged her skirts. All eyes were trained on the unfolding drama, insignificant though it was.

These weren’t the quarter sessions, where murderers and burglars would be sentenced to death or transportation. The magistrates here judged little thefts, brawls gone bad, acts of public lewdness. Fines were levied; men were imprisoned for a few days. The stakes were low, and the crimes were interesting only because a neighbor had committed them.

She’d not yet allowed herself to look in the direction of the magistrates. Old superstition, that—one didn’t peek through the curtains at an audience before a performance. That spelled ill luck.

The austere white walls seemed to magnify the autumn chill, but Miranda slipped out of her worn cloak and removed her straw bonnet, taking care not to disturb the blond wig she’d donned that morning.

“What is this?” one of the magistrates asked. “The fifth time you’ve appeared before us?” His voice was familiar.
Too
familiar.

She mustn’t look up at him in betraying consternation. Miranda’s hand clenched around the wool of her cloak instead; she forced it open before the gesture could betray her.

At her immediate right, the clerk sat, his pen arrested over the inkwell. He hadn’t written a thing in minutes.

Miranda leaned over and spoke in an urgent whisper. “Sir. I happened to witness one of the crimes today. The accused is a boy, perhaps twelve years of age—”

He glanced at her, frowning, and then looked away. “Tell me when he’s up,” he whispered gruffly. “I’m busy now.”

He didn’t look busy. The register before him read only:
Drunk. Admits he did it. Convicted.
Billy Croggins hadn’t been convicted yet, but she couldn’t blame the man for prematurely recording the result.

“If we keep convicting you, why do you keep at it?” This voice, thin and reedy, came from the left. “Turner—what is the punishment, again?”

Turner.
So she
had
recognized that earlier voice. Another flash of nervousness traveled through her, this one tinged with a hint of fear. Still, she kept her gaze trained on Croggins.

The defendant grinned unabashedly. “I wager I know the punishment by now. Ten pounds for the repeat offense, which I haven’t got—and so six hours in the stocks instead.”

“Don’t worry, Billy,” someone called from the audience. “We’ll make sure all the turnips are nice and rotten before we throw them, so they don’t scratch your pretty face.”

The room erupted into laughter.

“Gentlemen,” another voice said, “it’s a conviction, then?”

Everyone else shifted to look at the magistrates to the left of the room. It would seem out of place if she didn’t follow their lead, and so Miranda raised her head. The three men tasked to hear the sessions today sat behind a heavy oak bench. They were dressed identically: curled, white-powdered horsehair wigs atop, and heavy black robes beneath. The man in the center with the red face was the mayor. On his left sat a fellow she’d never seen before. That man’s wig was askew.

“Indeed,” Croggins was saying, “what’s another conviction amongst friends?”

On the right, sitting a good two feet from his compatriots… “Perhaps,” this last magistrate said, “I might ask a few questions before we rush to judgment.”

Miranda swallowed.
He
was Magistrate Turner—better known as Lord Justice.

His face wasn’t red. His wig was straight. And while the other magistrates were smiling at Croggins’s antics, Lord Justice looked as somber as a crow in his black robes, stern and implacable. She could almost believe the stories that were told about him.

“Always covering the ground, Turner,” the mayor said in exasperated tones. “Very well. I suppose you must have your way. But I hardly see the point, as the man has admitted his guilt.”

Compared with his colleagues, Lord Justice looked like the statue of a magistrate instead of irresolute flesh and blood. He fit the name he’d been given. Justice made her think of hard lines and inflexible resolve. Lord Justice scanned the room with sharp, mobile eyes, which seemed to take in everything all at once.

Lord Justice, everyone said, could smell a lie at twenty paces. Miranda sat no more than fifteen from him.

Just looking at the man gave her gooseflesh. She’d appeared before him once. Even thinking of the questions he’d asked, the way his eyes had pierced her, made the skin on the back of her neck prickle. And
that
time, she’d been telling the truth.

“Perhaps,” Lord Justice said, “you could help me understand the events of last night. I’ve heard the testimony from your daughter. But I wish to hear it in your words. How did the fire start?”

“Ah,” Billy Croggins said, “that would be the
drunk
part of drunk and disorderly.” He smiled winningly.

Lord Justice was not so easily won. He steepled his fingers. “Were you voluntarily drunk? Or did you have your drink forced upon you?”

“I’d be much obliged, Your Worship, if people forced drink upon me. As it were, I had to purchase it like a regular booby.”

The only response to that witticism was a thinning of the magistrate’s lips. “When you were inebriated, you went to your daughter’s house?”

“Yes, and can you believe my own child wouldn’t open her door for me? Told me to go away and come back sober. If I waited for that, I’d never see my grandchildren at all, not ’til Gabriel sounded his trump at the last.”

A woman in the crowd let out a harsh bark of laughter at that, and the mayor hid a smile behind his sleeve.

Lord Justice still found no amusement in the proceedings. He tapped his fingers against the bench. “Was it then you threw the lantern into the woodshed and threatened to burn her out?”

The smile on Croggins’s face fixed in place. “Might have done, might have done. Wasn’t thinking so clearly at that point. I didn’t
actually
burn her woodshed down—just wanted to scare her a little, so she’d show some respect for her father. Besides, it seemed like a good idea. At the time.”

Lord Justice sighed and leaned back. “You see, Billy Croggins, this is what has me worried. Everyone in this courtroom seems to think you’re a jolly old fellow. Everyone thinks you’re amusing. Everyone is laughing. Everyone, that is, except your daughter. Why do you suppose that is?”

“She’s got no sense of humor.”

A few chuckles rose from the audience, but they were weaker, and held a nervous edge.

“Here’s my theory: her two infants were in the house when you tried to burn her out. Maybe she didn’t see the joke in putting their lives at risk.”

“Aw, it was just the woodshed!”

“It was an outbuilding, within the curtilage and attached to the dwelling-house,” Lord Justice said. His gaze focused on some point in the distance, as if he were reading those words off some page that only he could see. “According to the Statute of George, that’s arson.”

“Arson! But the wood scarcely even caught!”

Lord Justice leaned over the bench. “Arson,” he repeated firmly. “As you didn’t succeed, attempted arson, and as such, punishable by one year’s hard labor. Do you think that might dry you out?”

“Your Worship, I was drunk. I didn’t know what I was doing.”

“Under the rule of Lord Hale, a man who becomes voluntarily drunk is responsible for his actions, the same as if he was sober.”

Croggins glanced about. There was no laughter in the courtroom now. Lord Justice had emptied it of all humor. This little display, after all, was just another demonstration of how Magistrate Turner had come by his name.

Choice Matters (Southern Heat Book 1) by Jamie Salisbury
Children of Ash: A Meridian Six Novella by Jaye Wells
Democracy of Sound by Alex Sayf Cummings
Kissing with Fangs by Ashlyn Chase
Lost In Kakadu by Talbot, Kendall
For The Least Of These by Davis, Jennifer
Born to Be King: Prince Charles on Planet Windsor by Catherine Mayer
A Code of Love (The Code Breakers 1) by Jacki Delecki
Red Sky at Dawn by D. A. Adams
Urchin and the Raven War by M. I. McAllister