Read Unremarkable (Anything But) Online 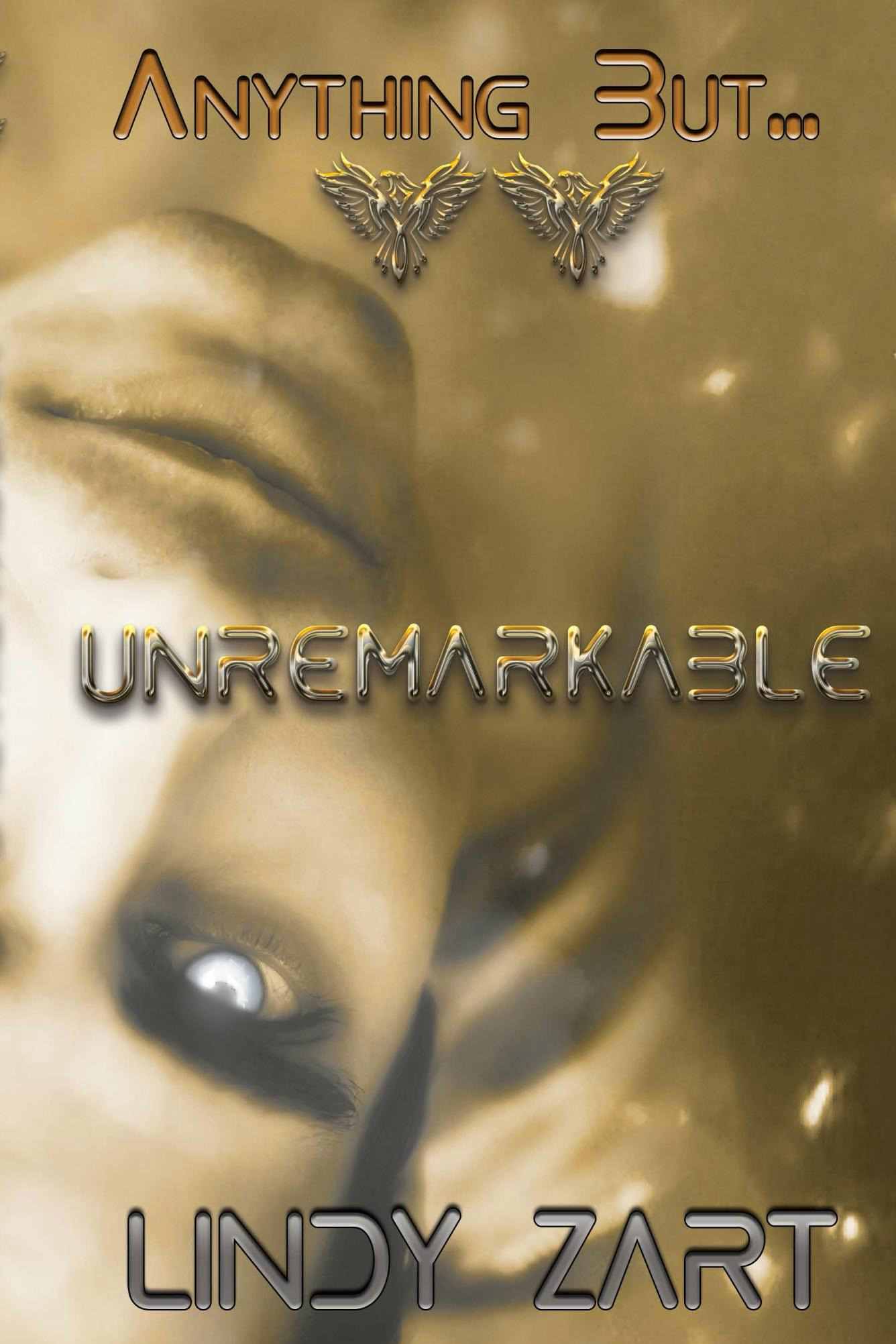 Published by Lindy Zart at Smashwords

Names, characters, places, and incidents either are products of the author’s imagination or are used fictitiously. Any resemblance to actual events or locales or persons, living or dead, is entirely coincidental. All rights reserved, including the right to reproduce this book or portions thereof in any form whatsoever.

for purchasing a character role to benefit a fundraiser.

Thank you to my author friend
Juli Valenti
—

for allowing me to use your name for a character role. I kind of like Juli the UD.

Special thanks to
Elisabeth Wheatley
—

for the title suggestion.

This is dedicated to all of the wonderful people I’ve met since deciding to go forth with self-publishing. It has been an enlightening, exhausting, and exhilarating journey. I cherish and am grateful for all of you. Thank you for your continued support. You are amazing.

Consciousness slammed into her, her
first thought incomprehensible and undeniable.

Disbelief, rage and something akin to disappointment fought within her. She was right about him. Honor should be happy about that, but she couldn’t be.
Don’t think about it.
As she fought to keep her thoughts off the traitorous boy, the stillness of the room took over. The silence seemed odd and out of place. It felt like she was completely alone, in some kind of surreal atmosphere. Where were the beeping monitors; the presence of nurses and doctors? She’d been shot—wasn’t she in a hospital?
Shouldn’t
she be?

There was nothing in the room, nothing but her and the bed she was on. She knew the room, or rather, rooms like it. It was not a standard hospital room. It was a UD/UDK facility type of room. The fact that Honor didn’t know if that was a good thing or a bad thing didn’t sit well with her. And really, the foreboding creeping through her was telling her it was a bad thing;
way
bad.

Eyes shifting, she tried to see as much as she could of the immediate vicinity, but there was a heavy pressure on her, making it impossible to move too freely.

When she tried to raise an arm, Honor was dismayed to find both of them strapped down with thick bands of material.
Like the UDs.
She was being treated like a UD. Why? Helplessness erupted in her, causing the panic to intensify and the need to escape grow. Shouldn’t she have pain in her abdomen? She’d taken a bullet to her guts—why didn’t she feel anything? Nothing made sense.

Where was Nealon? Honor felt the prick of tears and wasn’t sure why. Were they because she worried for his life or because she was afraid he’d abandoned her? Gritting her teeth, she willed them away. They came back when she thought of her mother and sister. What they must be thinking, fearing. Did they even know where she was or what had happened? What
had
happened? She remembered being shot but after that, there was nothing except a hole for memories.

Air swooshed behind her, signaling the opening of a door, and Honor felt another presence in the room. She rapidly blinked her eyes to try to make the tears fade. It was already cold in the room, but this entity made it frigid.

Honor froze, her sense of helplessness escalating. She was immobile, and she was next to a man that hated her; a man she was pretty sure gave Ryder the order to shoot her.

A leathery face framed by gray hair loomed above her, icy blue eyes studying her face. His not quite right smell permeated the room and Honor swallowed back a gag.

“
You should be dead,” Superior August stated, his expression revealing nothing on his thoughts that she clearly wasn’t dead.

“
Sorry…to disappoint you,” she gasped out, her voice brittle and faint from disuse.

A smile appeared and vanished within the span of five seconds. “You are unusually cocky for one relying on the care of others to survive.”

She glared at him, willing him to do whatever he was going to do and get it over with.

As though knowing her thoughts, Superior August smirked and straightened. “You were shot in the stomach. The bullet destroyed most of your internal organs. Like I said, you should be dead. The fact that you are not has made you a very important girl. Only UDs could survive something like that and you are clearly not a UD.”

He paused, studying Honor’s face in a way that made her stomach clench. “So what are you?” he mused quietly, his eyebrows lowered.

Honor stared back, not speaking. Her mind, on the other hand, was in overdrive.
Shot in the stomach…should be dead…not a UD or a UDK? What?

“
I want to say it’s from the UD blood administered into your system to heal you faster, but I’ve never seen anyone adapt so easily to that either. Most UDKs reject the UD blood and die. Or they go insane. You didn’t. You’re completely healed.” He paused. “You should have been dead before you even got here, really.”

August tapped his fingers on the side of the metal bed as he gazed down at her, the sound aggravating to Honor. “Which is why I let you live, and the only reason I let you live. You, Honor Rochester, are an enigma. And I hate mysteries. I’m going to have fun experimenting on you.”

He smiled then and her insides went numb. “Until next time.”

“
Wait!” she called out, so afraid to be alone that she even preferred his presence to none. And questions, she had so many questions.

He came back into view, his eyebrow lifted quizzically.

“How long have I been here?”

She tried to speak and couldn’t, her mouth silently opening and closing. Six
months
? Honor had lost over half a year of her life and hadn’t even known about it? A lot could happen in six months; a lot of terrible things.

“
How could I be here so long? Asleep? And why am I completely healed? Shouldn’t there be some discomfort at least? I feel nothing.”

“
You’re healed. Why would there be any pain? You were drugged during the recovery process, so that you didn’t slow or stop the healing by waking up and overreacting. The IVs were removed yesterday.” His lips twisted in a semblance of a smile, making it obvious he wasn’t telling her everything.

What were in the IVs?
A thought she didn’t want to openly address, not yet.

“
Where is my mom and…and…my sister? Where’s Nealon?”

Where was Ryder? What happened to Christian? Her mom…Scarlet. Honor closed her eyes against a wave of pain in her mind and heart. Where was everyone? Were they okay?

Dread grew at his casualness when he said their names. “What have you done to them?” she whispered. “Have you hurt them?”

He drew himself straighter. “Do you think me some kind of monster?”

Yes. I do.
Not just
some
kind, but the
worst
kind.

“
They’re fine. And as long as you cooperate with me, they will continue to be fine.”

August patted her head and Honor flinched, wishing she could pull away from his revolting touch. “They’re on vacation. Don’t make it a permanent one. Get some rest, Honor. You’re going to need it.”

“Vacation?” Her pulse tripped. “Where? Where are they? What did you do to them?” Honor’s voice was shrill.

“
They are fine,” he replied evenly. “Don’t worry about them. Actually, don’t even speak about them. Your hysteria is not needed, nor appreciated. I told you they were safe. I am many things, but a liar isn’t one of them. Generally.”

“
What happened to Christian? And Nealon?” she whispered.

The sob she’d choked back down her throat at his words erupted as soon as the door swooshed shut. It burst out of her; her heart aching for all whose lives had been ripped and shredded by that man and his abominable UD and UDK society—a society that shouldn’t even exist.

Christian was
dead
?
No.
A flash of chiseled features, dark brown hair with a hint of red in it, and silvery eyes stabbed her consciousness. He was going to be a writer. She always enjoyed reading his articles for the school paper. They’d been smart, insightful, colorful. Sorrow washed over her at all he had wanted to be and now wouldn’t, because of something he had no control over.
Christian is dead.

She closed her eyes, refusing to believe it. August was a liar, a manipulator. She couldn’t believe or trust anything he said.

Honor hadn’t even asked about Ryder. She assumed he was okay, being August’s replica-in-the-making and all. She didn’t even know if she would care if he
wasn’t
okay. The jerk shot her. She at least knew her family was okay—she had to believe that. But Nealon—he hadn’t answered her about him.
Twice.
Hot tears streamed down her face and Honor quietly wept.

She didn’t allow herself long to cry, only a minute or two, before Honor began to process the situation. The gunshot wound, her healing, her family, everyone and everything involved—it was too much. But the thing that bothered her the most, the thing that weighed heavy on her mind and being, was the fact that she was trapped, held captive, like some test subject, or animal.
That’s what you are now.
No. It wasn’t.
She
wasn’t.

Empathy for the UDs rose in her, overwhelming and dizzying. Honor understood how they felt. She’d thought she’d known, but she hadn’t, not really. It was a horrible feeling—your freedom being taken away, your humanity stripped down to nothing; kept locked up, treated like an afterthought, and a mistake as well.

Clenching her teeth, she shoved the fear away and tried to focus. Honor didn’t know how to give up, how to not fight, and she wasn’t going to allow herself to find out what it felt like now. She couldn’t do anything or help anyone tied to some metal bed like she was, so obviously Honor needed to figure out how to get
un
tied from the bed.