Read Up from the Grave Online

Up from the Grave 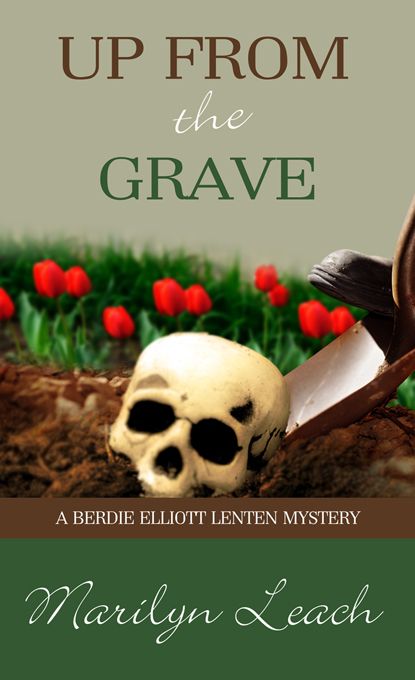 Up From the Grave

This is a work of fiction. Names, characters, places, and incidents either are the product of the author’s imagination or are used fictitiously, and any resemblance to actual persons living or dead, business establishments, events, or locales, is entirely coincidental.

Up From the Grave

eBook editions are licensed for your personal enjoyment only. eBooks may not be re-sold, copied or given away to other people. If you would like to share an eBook edition, please purchase an additional copy for each person you share it with.

Harbourlight Books sail and mast logo is a trademark of Pelican Ventures, LLC

To Andy and Lillie Harris whose generosity, support, and humor have opened the way for my appreciation of the English culture and proven English friends are family.

Praise for
Berdie Elliott Mystery
, Candle for a Corpse
:

"This is an engaging mystery with likeable and interesting characters. I hope we'll be seeing more of Berdie and friends. ~ Liz Carey's Library

You will not be able to put the book down until you're finished. ~ Cindy Loven, The Borrowed Book.

In the dampness of the English spring night, the woods at the edge of Aidan Kirkwood could trick the imagination into believing something or someone moved amongst the ancient twisted trees and through the upstart arbors.

The man shivered and searched the wooded landscape. How long had he been walking? Pale light from a half moon fell across his facial features and exposed the sheen of his black satin dressing gown. A sharp pain on the sole of his foot woke him to the uneven woodland floor beneath his moist bed slippers. It wasn’t until that moment he realized he still wore his nightclothes.

The black wooded recesses etched his own murky dilemma deeper into his consciousness.

“What am I doing?” The man lifted his mortified voice into the darkness.

In a silvery flash, he caught another glimpse of movement. It wasn’t his frenzied vision playing games. It was definite movement. His wildly pulsing heart urged him forward to get a fuller view.

A shadowed figure emerged from the trees not more than a few yards away. Both men started, coming to an abrupt halt.

The figure was only an outline, but his widened eyes were just visible below his woodsman cap. Moonlight glinted off the edge of a pointed spade hugged close to his side. A pungent odor of freshly upturned earth penetrated the night air. The stranger’s eyes ran the full length of the night-clothed male.

The gulf of silence between them became an uneasy space.

“Why are you on this property, woodsman?” The man hoped his words weren’t filled with the anxiety that gripped him.

“Why are ya about the wood in your bed clothes?” the stranger retorted.

The man swallowed hard. “Perhaps it’s best if we agree to forget this chance meeting.”

With an awkward vigilance, the woodsman’s eyes stayed squarely upon the oddly clad male. “So be it.” He stepped back into the black of the protective trees and moved on.

The man pulled his robe tighter. “Where am I now?” he questioned the darkness. He took several steps forward where he could just make out the edge of the wood. There it stood. The outline of an ancient edifice, a moonlight-edged church prevailed solidly against the night as if wearing a halo.

“God sees all.” He placed his hands over his face. This was a dark night despite the moonlight, and he would never be able to erase the memory of it.

The jolly bell that hung on the door of the Copper Kettle Tea Shop sounded its farewell in Berdie Elliott’s ear. None too soon, she stepped from the shop. Laden with white boxes stuffed with fresh, warm scones, she was attended by Lillie Foxworth who also balanced several full boxes in her arms.

“Step lively, Lillie, we need to get these to the vicarage as quickly as possible.” She took a deep breath, inhaling the fresh aroma of the scones mingled with the refreshing spring air. She turned her bit-more-pudgy-than-lean body to stride up the High Street, and Lillie followed along.

“I do believe, Lillie, there’s enough hot air in that tea shop to stir up gale force winds in the North Sea.”

Lillie gave a quick grin. “And would you expect any different where people of a small village gather?”

“I take it, then, you did hear comments made over tea about our parish council chairman.”

“You were ear wigging.”

Berdie half grinned. “And you weren’t? As I said, gales of hot air.”

“Well, you must admit, Berdie, Grayson Webb is rather flash and glam.”

Berdie’s eyebrows, which she had delicately shaped just this morning, escalated above her glasses. “Who wouldn’t welcome a small floral feature with a calming pond in the back garden of the church?”

“Oh the village loves the plan for the garden feature. It’s all the ado Grayson has made of this mystery benefactor who’s to appear at the ceremony that they don’t like.”

“What did you hear, Lillie? Or should I say overhear?”

“On one side, many think gifts to the church should be private. And then on the other side there’s Dudley Horn who’s set up a ‘Guess the Benefactor’ betting pool at the Upland Arms.”

“Oh yes, he asked my Hugh if he’d like a go.” Berdie couldn’t help but smile.

“He told Dudley he’d have five goes if the proceeds all went towards the church garden scheme. He suggested”—she lowered her voice to mimic her husband—“‘that way everyone in the pool could all attend the fête as surprise benefactors.’”

“Grayson Webb may be causing a stir, but then who in Aidan Kirkwood doesn’t own a very large spoon?”

Berdie exhaled and let the controversy swirling round the parish council chairman depart into the easy warmth of the afternoon.

She took in the shops and businesses that called this street home in Aidan Kirkwood and thought back to only a year and a half ago when this was all new to her and her husband, Reverend Hugh Elliott. It was Hugh’s first pastorate, having chosen to enter ‘the Lord’s army’ upon retirement from Her Majesty’s Royal Navy.

Now, the familiarity of this tidy road felt like the warming spring sun. The whole of the parish was in the midst of the Lenten season with a keen eye to the Easter celebration that followed. And Berdie was the hostess.

“You know, Lillie, I think I’ve discovered Villette’s recipe for her rhubarb sponge tartlets.” Berdie gave a quick nod towards the tea shop now behind her.

“She’s a bulldog concerning her recipes,” Lillie declared. “How’d you do that?”

“I told her I had tried making some tartlets like hers with that fine almond flavor, but I added too much almond extract. ‘No, no,’ she said, ‘never use almond extract.’” Berdie moved a short red-brown wisp of bobbed hair behind her ear. “So the next time I saw her, I told her that I used almond flour in the mix. ‘Oh my,’ Villette said ‘that had to make the tartlets quite dry.’”

“I don’t remember you making these tartlets,” Lillie challenged, her hazel-green eyes in a bit of a squint.

Berdie tipped her head and formed her lips into a coy smile. “But don’t you see, that means she grinds her own almonds for the little cakes.”

Lillie shook her head of dark natural curls. “But you don’t like rhubarb tartlets. Indeed, you aren’t that keen in the kitchen.”

“Now that is a feat!” Lillie teased. “Why yes, the former highly regarded investigative reporter from a large city newspaper has ferreted out the best rhubarb sponge tartlets recipe in the wee village, and she has no intention of ever making or eating them.” A quick laugh and Lillie’s thin tawny face all but lit up like a spring dawn. “Snap!” Lillie stopped dead still on the narrow walkway and focused on her friend of over twenty years. “Bernadine Abigail Elliott, you’re bored.”

“I should say not.” Berdie could feel the pink rise to her cheeks even while moving forward.

“You haven’t had any desperate crimes to solve in over a year and you’re bored!” An impish grin spread across Lillie’s attractive face. “Come on, Berdie. Admit it.”

Berdie halted. She spun round so quickly to face Lillie it sent her tortoiseshell glasses on a slight cascade down her nose. “I love working with Hugh in the church.”

Berdie adjusted the unruly spectacles with one hand while balancing the scones in the other. “And Aidan Kirkwood is a wonderful place to live despite the fact it can get a bit
close.
”

“Indeed!” Lillie tapped her fingers on the top box she held. “Go on then.”

Berdie pursed her lips. She looked her friend directly in the eye. “Well, I wouldn’t use the word bored. Maybe”—she searched for the right expression—“a bit rusty.”

“Wire wool. That works well on rust.” Young David Exton, the editor of the Kirkwood Times, zipped by with a quick nod to both the women. “See you later at the fête,” he quipped.

“Yes,” Berdie called after him. Then she fastened her gaze again on Lillie. “And keep your voice down.”

“A-ha!” Lillie shook her head again. “Your intuitive gift for sniffing out and fixing trouble needs a rigorous workout.” Her dark thick lashes made her now wide eyes appear even larger. “Our talents are never allowed to go spare. I shouldn’t wonder if something big is brewing. Yes indeed, but what?”

“Now you’re being silly.” Berdie recommitted herself to charging up the street. “First of all, my fine husband feels that involvement in crime solving distracts from my church duties.”

“When has that stopped you before?” Lillie took several fast steps to keep astride her comrade.

“Secondly, the biggest thing that’s going to happen is to successfully complete a simple welcome tea this afternoon along with a modest sod turning ceremony. Hardly a catastrophic agenda.”

“Is that all you have to say on the matter?”

Berdie didn’t respond. She simply redirected the conversation to a topic she knew to be close to Lillie’s heart. “Is your handsome Loren coming to the festivities today?”

The jolly Lillie went quiet. A seldom seen tightening of the jaw loosened just enough to speak a stark. “One should think.”

“Oh yes, another,” Lillie answered abruptly. “Another lonely cab ride home, another egg and chips for one in front of the telly.” She huffed. “It’s been weeks since we’ve made it through an entire evening together without his mobile crying out for him to return to work.”

“He’s a pathologist, Lillie. His work is demanding, and his hours are often higgledy-piggledy.”

Berdie could see Lillie’s frustration and at the same time felt the need to quickly get to the vicarage. She nudged Lillie’s arm and began rapid steps forward. Lillie moved with her.