Read Up, Up, and Away: The Kid, the Hawk, Rock, Vladi, Pedro, le Grand Orange, Youppi!, the Crazy Business of Baseball, and the Ill-fated but Unforgettable Montreal Expos Online

Up, Up, and Away: The Kid, the Hawk, Rock, Vladi, Pedro, le Grand Orange, Youppi!, the Crazy Business of Baseball, and the Ill-fated but Unforgettable Montreal Expos 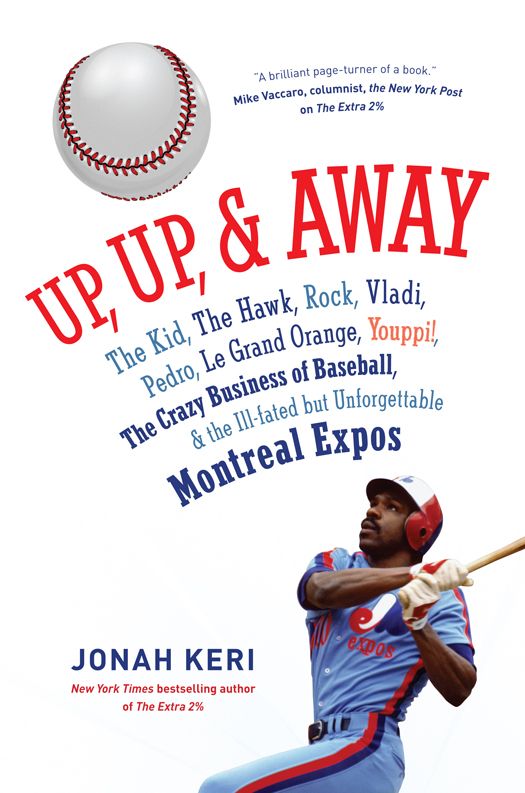 The Extra 2%: How Wall Street Strategies Took a
Major League Baseball Team From Worst to First

All rights reserved under International and Pan-American Copyright Conventions. No part of this book may be reproduced in any form or by any electronic or mechanical means, including information storage and retrieval systems, without permission in writing from the publisher, except by a reviewer, who may quote brief passages in a review. Published in 2014 by Random House Canada, a division of Random House of Canada Limited, Toronto. Distributed in Canada by Random House of Canada Limited.

Keri, Jonah, author
Up, up, and away : the Kid, the Hawk, Rock, Vladi, Pedro, le Grand Orange, Youppi!, the crazy business of baseball, and the ill-fated but unforgettable Montreal Expos / Jonah Keri.

To Papa Alec, who took me to the Big O
to see Tim Raines hit for the cycle,
and Papa Max, who had the best nickname
for Rodney Scott (“The Woodchopper”)

B
efore the Montreal Expos actually lived, they almost died. Blame it on big dreams. In the 1960s, few cities anywhere dreamed bigger than Montreal. During his second stint as mayor, Jean Drapeau and his executive committee spearheaded a staggering number of wildly ambitious projects. Place des Arts opened in 1963, giving Montreal a sprawling performing arts centre that expanded and shifted the city’s downtown core eastward—a big deal given that anglophone power and wealth had been consolidated in the city’s west end. The Montreal Metro made its maiden voyage in 1966, more than half a century after the idea for a subway was first proposed, and grew to become the most widely used rapid transit system in Canada.

But by far the biggest and ballsiest venture was Expo 67. Montreal had previously bid to host the World’s Fair in 1960, only to lose out to Moscow. Two years later, after Moscow dropped out, Drapeau pushed for another bid. On November 13, 1962, he got his wish: Montreal would host the six-month exhibition from April
to October 1967 to celebrate Canada’s centennial and Montreal’s reach-for-the-sky mentality.

Problem was, Drapeau often acted first and asked questions later. The mayor eschewed existing locations within the city as sites for the exposition. Instead, he proposed a gigantic public works project: Montreal would build a large, man-made island from scratch in the middle of the St. Lawrence River (Île Notre-Dame), greatly expand an existing one (Île Sainte-Hélène), and host Expo there. Despite its audacity, the guts of the plan were a stroke of genius, with the city moving the mountains of rock and rubble dug up during concurrent construction of the Metro, along with silt and gravel dredged from the river, to build out the islands.

But the plan’s actual execution was fraught with seemingly overwhelming problems. Several top organizing officials resigned after a computer program predicted that all the necessary groundwork—building the islands, completing the Metro, erecting a bridge, then setting up the enormous exhibition itself—couldn’t possibly be completed in less than four and a half years for the opening ceremony in April 1967. There were also environmental objections, complaints from other Canadian cities over funding huge and potentially wasteful projects in Montreal, and major financial concerns as a preliminary budget of $167 million in 1963 swelled to $439 million four years later.

The city got it done anyway. The mass resignations opened the door for a committed new group. A diplomat named Pierre Dupuy assumed the role of commissioner general, and the man overseeing day-to-day construction, Robert Fletcher Shaw, was a hard-nosed engineer. The management group led by Dupuy and Shaw came to be known as
Les Durs:
the tough guys. Under their stewardship, Expo 67 became the largest world exposition ever held in North America, drawing more than 50 million visitors, with a record 569,500 in one day. When asked early in the process what
he hoped to accomplish by bringing Expo to Montreal, Drapeau said he wanted the city to host “one of the finest exhibitions of its kind that the world has ever seen.”

What the world got was both a six-month party and a paean to progress. There were grand performances of all stripes, including jazz, opera, and ballet. The Grateful Dead performed, as did Jefferson Airplane. The
Ed Sullivan Show
broadcast live for two weeks from on site, headlined by acts like The Supremes. For many visitors, however, it was Expo’s educational components that resonated the loudest. Sprawling exhibits playing on the fair’s “Man and his World” theme dominated the grounds. As
The Canadian Press
described it at the time: “All over the mid-river 1,000-acre site strange shapes and unfamiliar sounds heralded the breaking of new ground in the fields of design, architecture, transport, construction, cinema and communication of ideas.” Expo 67 was fun. But it also conveyed an image of being
important
.

It was with that same ambitious spirit that the city of Montreal, Mayor Drapeau, and the head of the city’s executive committee, Gerry Snyder, fervently pursued a Major League Baseball expansion team. Bid now, work out the details later.

This latest big dream had its roots in another baseball team that had come and gone: the Montreal Royals. The first iteration of the franchise played in Montreal from 1897 to 1917, with affiliations in the Eastern and International leagues and a list of managers that included future Hall of Famer Ed Barrow. But it was the second version of the Royals that ultimately gained acclaim in the baseball world, and, for a time, a rabid following in
la belle province
. The Royals of 1928 to 1960 retained affiliation with a single circuit, the International League, but didn’t truly flourish until well into this second stint, after the major league’s Brooklyn Dodgers bought the Royals in 1939. The Royals won the league title soon after, in 1941. A year later, legendary baseball executive Branch Rickey
jumped from the St. Louis Cardinals to the Dodgers, after becoming the first operator to build an elaborate and highly successful farm system of minor league teams. When he took over the general manager’s role with the Dodgers after the 1942 season, Rickey immediately set to work building a similar killer farm system for his new organization—with the Royals as its crown jewel. The Royals went on to win six more league titles, led by a cavalcade of future National League stars. Don Drysdale, Roy Campanella, and Duke Snider all matriculated for the Dodgers’ Triple-A club in Montreal while future World Series–winning operator Buzzie Bavasi ran the club, and future Hall of Fame manager Walter Alston skippered it for four seasons. Though he’d eventually forge his Hall of Fame career in Pittsburgh, with the Pirates, Roberto Clemente also came through Montreal.

But the main attraction—the man who won the hearts and minds of Montrealers—was Jackie Robinson. It’s entirely possible that Robinson could’ve achieved instant stardom in the big leagues even without a year honing his craft in Triple-A. But Rickey rightly saw Robinson’s eventual transition to the majors as a mental and emotional challenge as well as (or more than) a physical one. Rickey deemed Montreal an inviting and progressive enough place to welcome the man destined to become the first African-American player of his era to break Major League Baseball’s long-standing colour barrier. Fans flocked to Delorimier Downs to see the phenom in action, and he didn’t disappoint. In his one year in Montreal, Robinson batted .349 with a .468 on-base percentage (OBP), stealing 40 bases and showing an amazing eye at the plate: 92 walks versus just 27 strikeouts in 124 games.

The Royals went on to win the Little World Series that year, beating the American Association champion Louisville Colonels four games to two. The clinching game came on October 4, 1946, before a record home crowd of 19,171. Sam Maltin, a writer and
friend of Robinson’s, detailed in the
Pittsburgh Courier
what happened after the Royals won the deciding game 2–0.

Ushers and police couldn’t keep the crowd from the field. They refused to move and sang
Il a gagné ses Epaulettes
(“He won his bars”) and “We want Robinson.” It was a mob ready to riot … Jackie came out and the crowd surged on him. Men and women of all ages threw their arms around him, kissed him, pulled and tore at his clothes, and then carried him around the infield on their shoulders, shouting themselves hoarse. Jackie, tears streaming down his face, tried to beg off further honors. They carried him back to the clubhouse. There, he had a tough time packing his gear as people came trooping in to wish him luck. They all said they wanted him back.

When Robinson finally left the ballpark, those delirious fans chased him all the way to his train. Describing the scene, Maltin continued: “It was probably the only day in history that a black man ran from a white mob with love instead of lynching on its mind.”