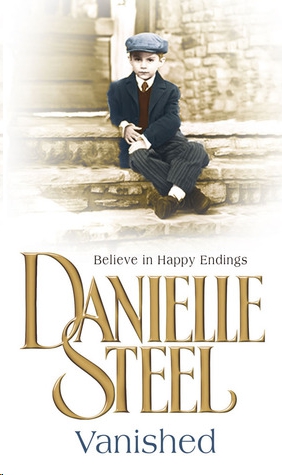 For the pain of having a mother who follows you everywhere, and the agony of so many years of not being able to do what you want, when you want to. For the person you are, and the person you will become. The fine man, the good friend, and maybe even the great writer!

With all my love, Mom,

The best Daddy, the best friend, the greatest love, the sweetest man, the most extraordinary blessing in my life …how lucky we all are to have you! With all my love and heart, always,

He was their son,
their pride and joy
…

Then the unthinkable occurred …

“STEEL IS ONE OF THE BEST!”

Charles Delauney limped only slightly as he walked
slowly up the steps of Saint Patrick's Cathedral, as a bitter wind reached its icy fingers deep into his collar. It was two weeks before Christmas, and he had forgotten how cold it was in New York in December. It was years since he'd been back to New York …years since he'd seen his father. His father was eighty-seven now, his mother had been gone for years. She died when he was thirteen, and all he could remember of her was that she had been very beautiful, and very gentle. His father was senile and ill, bedridden and infirm. The attorneys had insisted that Charles come home, at least for a few months, to try and get the family affairs in order. He had no siblings and the entire burden of the Delauney affairs rested on his shoulders. Landholdings throughout the state, an enormous estate near Newburgh, New York, coal, oil, steel, and some very important real estate in downtown Manhattan. A fortune that had been amassed not by Charles, or even by his father, but by both of his grandfathers. And none of it interested Charles for a single moment.

His face was young, but weather-lined, and showed the wear of pain and battle. He had just spent almost two years in Spain, fighting for a cause that was not his own, but about which he cared deeply. It was one of the few things he did care about …something he truly burned for. He had joined the Lincoln Brigade to fight the Fascists almost two years before, in February of 1937, and he'd been in Spain ever since, fighting the battle. In August he had been wounded again, near Gandesa during the battle of Ebro, in a ferocious confrontation. It was not the first time he had been wounded. At fifteen, in the last year of the Great War, he had run away and joined the army and been wounded in the leg at Saint-Mihiel. His father had been furious about it then. But there was nothing he could do now. He knew nothing of the world, or his son, or the fight in Spain. He no longer even recognized Charles, and perhaps, Charles had decided as he watched him sleeping in his enormous bed, perhaps it was better. They would have argued and fought. He would have hated what his son had become, his ideas about freedom and liberty, his hatred of “fascists.” His father had always disapproved of his living abroad. Born late in his father's life, it made no sense to the elder Delauney that Charles wanted to live over there, raising hell in Europe. Charles had gone back to Europe at eighteen, in 1921, and had lived there for seventeen years since then, working occasionally for friends, or selling an occasional short story in his youth, but in recent years primarily living from his very substantial trust fund. The size of his income had always irritated him. “No normal man needs that much money to live on,” he'd once confided to a close friend, and for years he'd given most of his income to charitable causes, although he still derived great pleasure from making a small sum from one of his short stories.

He had studied at Oxford, and then at the Sorbonne, and finally, for a brief while, he had gone to Florence. He had been more than a little wild in those days. Drinking as much fine Bordeaux as he could consume, an occasional absinthe, and carousing with a fascinating array of women. At twenty-one, he had thought himself a man of the world, after three very uncontrolled years in Europe. He had met people others only read about, did things few men dreamed, and met women others only longed for. And then …there had been Marielle …but that was another story. A story he tried not to let himself think of anymore. The memory of her was still too painful.

She wandered into his dreams at night sometimes, especially when he was in danger, or afraid, asleep in a trench somewhere, with bullets whistling past his head …and then the memory of her crept in …her face …those unforgettable eyes …her lips …and the bottomless sorrow she wore like a wound the last time he saw her. He hadn't seen her since, and that was almost seven years before. Seven years without seeing her, touching her …holding her … or even knowing where she was, and telling himself it no longer mattered. Once, when he was wounded and convinced he would die, he had allowed himself to wallow in the memories, and the medics had found him unconscious in a pool of blood, but when he awoke, he could have sworn he saw her standing just behind them.

She had been only eighteen when they met in Paris. She had a face so beautiful and alive it looked as though it had been freshly painted. He had been twenty-three, and he had seen her as he sat in a cafe with a friend. He had been taken with her instantly as he watched her. And as she glanced at him, she had a face full of mischief. She had run away then, back to her hotel, but he had seen her again, at an ambassador's dinner. They had been introduced formally, and everything had been very circumspect except Marielle still had those laughing eyes that had bowled him over. But her parents were far less taken with him. Her father was a serious man, much older than his wife, and he knew of Charles's reputation. Her father was a contemporary of his own father's, and Charles thought they knew each other slightly. Her mother was half French, and always seemed to Charles to be incredibly proper and extremely dreary. They kept Marielle on a ridiculously short leash, and insisted that she dance attendance on them every moment. They had no idea what a flirt she was, or how funny she could be too. But there was a serious side to her as well, and Charles found he could talk to her by the hour. She had been vastly amused to discover him at the embassy, and remembered seeing him at the cafe, although she didn't admit it to him, until much later when he teased her. He was fascinated by her, and she by him. To her, he was a very intriguing young man, unlike any she had ever known. She seemed to want to know everything about him, where he came from, why he was there, how he came to speak such good French. And she was impressed from the first by his ambitions and abilities as a writer. She painted a little, she'd explained to him rather shyly at first. And later when they knew each other better, she had shown him some astoundingly good drawings. But that first night, it was neither literature nor art which appealed to either of them, it was something in their souls which drew them irrevocably together. Her parents noticed it too, and after her mother had seen them chatting with each other for a while, she attempted to pull Marielle away and introduce her to some other young people who had been invited. But Charles had followed her everywhere, a ghost who could no longer stand to be without her.

They met at the Deux Magots the following after-noon, and afterward went for a long walk along the Seine, like two mischievous children. She told him everything about herself, her life, her dreams, of wanting to be an artist one day, and then marrying someone she loved and having nine or ten children. He was less amused by that but fascinated by her. There was something ephemeral and delicate and wonderful about the girl, and yet underneath it something powerful and resilient and alive. She was like lace delicately placed over exquisitely carved white marble. Even her skin had the translucence of the statues he'd seen in Florence when he first arrived from the States, and her eyes shone like deep blue sapphires as she listened to how he felt about his own dreams about writing. He hoped, one day, to publish a collection of his short stories. She seemed to understand everything, and to care so much about all the things that mattered so deeply to him.

Her parents had taken her to Deauville, and he had followed her there, and then on to Rome …Pompeii …Capri …London and finally back to Paris. Everywhere she went, he had friends, and he would conveniently appear, and as often as possible go for long walks with her, or escort her to balls, and spend extremely boring evenings with her parents. But she was like a drug to him now, and wherever he was, wherever he went, he knew he had to have her. Absinthe had never been as fascinating as this girl. And by August … in Rome … as she looked at him, her eyes were filled with the same unbridled passion.

Her parents were nervous about him, but they knew the family after all, and he was well mannered, intelligent, and it was difficult to ignore the fact that he was the sole heir to an enormous fortune. The fortune meant nothing to Marielle, her parents were comfortable, and it was something she never thought about. She thought only about Charles, the strength of his hands, his shoulders, his arms, the wild look in his eyes after they kissed, the chiseled beauty of his features, like an ancient Greek coin, the gentleness of his hands when he touched her body.

He had no intention of ever returning to the States, he'd explained early on, he and his father hadn't gotten along since he'd gone off to the war at fifteen, and returning to New York afterward had been a nightmare. He felt as though the place was too small for him, too boring, too restrictive. Too much was expected of him, and they were all things he had no intention of doing. Social obligations, family responsibilities, learning about investments and holdings and trusts, and the things his father bought and sold which one day he would inherit. There was more to life than that, Charles had explained to Marielle as he ran long, gentle fingers through her silky cinnamon-colored hair, which hung long past her shoulders. She was a tall girl, but she was dwarfed next to him, and with him she felt delicate and frail and yet wonderfully protected.