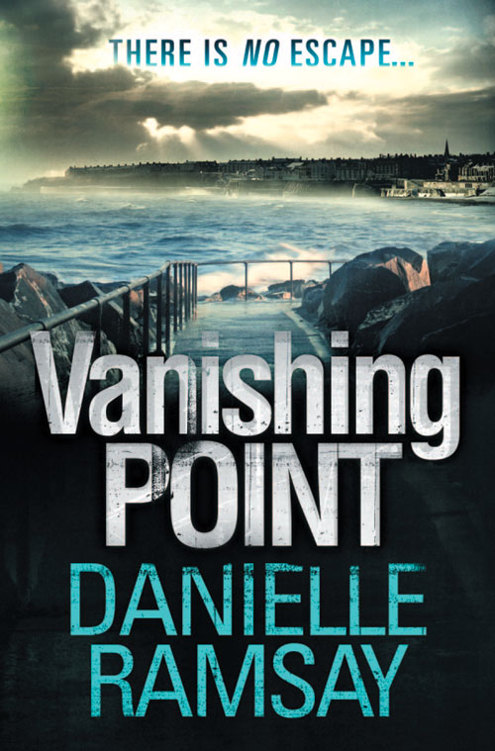 Read on for an extract of Danielle Ramsay’s compulsive debut novel,
Broken Silence
, out now.

She didn’t hear the foghorn in the distance, or feel the wet sea fret as it wrapped itself around her thin, cold body. All she felt was fear.

She turned and ran as hard as she could up the dark street, away from the glow of the main road where she’d managed to jump out the car.

She could hear them continue to shout in what sounded like Russian followed by the roar of a car’s engine. She knew it was them. They wouldn’t give up until they caught her. She knew too much. Had seen too much for them to let her disappear.

Suddenly a hazy white glow appeared at the top of the dark street as a car turned down it, heading towards her.

Seeing her chance she ran as fast as she could towards the blinding glare of the approaching vehicle, grazing her bare feet against the jagged, uneven pavements. She suddenly tripped over the kerb and fell, landing heavily on her hands and knees on the road.

She staggered up, her long dark hair clinging in damp clumps to her waxen, terrified face. Ignoring her bleeding knees, she lunged into the middle of the road, right in front of the oncoming car.

Skidding, the car slammed on its brakes, just missing her.

Furious, the driver punched his horn to get her out of the way.

Visibly pissed off, the driver blasted the horn again.

Desperate, she ran round to the passenger door and tried to open it.

The door was locked. She started pounding at the window.

The driver, a dark-haired man in his late thirties, looked at her with contempt.

‘Piss off home, you drunken cow!’ he said in disgust as he looked at her.

Her face was covered in a sheen of cold sweat as smudged black eyeliner and mascara trailed down her cheeks. Her short, strapless black dress was ripped halfway down the side, immodestly showing the scanty black lacy bra and thong underneath.

‘Too right I can, you slapper!’

He put his foot to the floor, threw the gear stick into first and took off, tyres screeching as he did so.

Feeling sick she watched the car speed away. She didn’t know what to do or where to run. All she knew was that if she didn’t hide, if they found her … She didn’t want to think about what would happen next.

She had to keep moving. And fast.

She turned and started running, following the direction the car had come from, hoping that she would find someone. Anyone who could help her.

Then she heard them turn into the street. Their footsteps pounding hard against the road, gaining on her. They were fast. Faster than her.

She didn’t know what he was saying but she instantly recognised the voice and it caused her stomach to tighten with fear.

Despite her instinct to run, she turned around.

He was standing less than twenty feet away. Six foot tall, if not more, wearing a designer black suit, an open-necked white shirt. Beside him, his muscle-bound brother. Virtually identical in height, build and dress. Both dark-skinned, covered in stubble that crept up their necks and across their prominent jawlines and cheek bones. Their hair was the same length as the stubble on their faces; coarse, thick and black. Their eyes just as dark with a hard, menacing edge.

Unable to move, she watched as a car idled up the street, coming to a stop behind the two men.

‘
Ateik čia apskretėlė. Dabar!
’ his brother barked, gesturing for her to come to him.

She shook her head as tears started to trail down her face. She didn’t need to understand the words to know what he wanted. He wanted her.

‘Fucking bitch!’ he cursed in a heavy accent as he strode over to her.

‘Help me! Someone! Help me!’ she screamed.

He grabbed her aggressively from behind. Yanking her head back by her long dark hair as his other leather-gloved hand silenced her. She struggled, unable to breathe as his hand covered her mouth and nose.

‘
Sustabdyti!
’ he ordered, snapping her head back as punishment.

She stopped fighting him.

He then forced her over to the idling black Mercedes with blackened windows. The rear passenger window buzzed down to reveal a man in his early forties, tanned with short blond hair and piercingly blue cold eyes.

He momentarily held her terrified gaze, enjoying her fear.

The man put his right hand out the window and gently touched her cheek. His gold signet ring with the emblem ‘N’ catching her skin.

She winced, noticing that his smallest finger was deformed. Half a gnarled stump remained where the finger had been chopped off.

Terrified, she stared into the man’s eyes.

A delicate smile played at the corner of his lips.

He then nodded at the man restraining her.

She watched with sickening realisation as the dark tinted window buzzed up.

Her captor suddenly relaxed his grip on her.

The pungent smell of strong, stale tobacco lingered on his sour breath.

His hands gently encircled her throat.

‘No … no … please?’ she implored as she looked at the other brother.

He stared at her, unmoved, with eyes that had seen it all before.

She tried to prise the gloved hands from her neck.

Terrified, she struggled, clawing and scratching at his large hands.

Grunting with satisfaction he squeezed even harder.

She frantically tore with bloodied, broken nails as her lungs began to burn.

Ten seconds later she felt hot urine trickle down her legs as the fight started to leave her body.

‘Sssh, little bird …’ he moaned gutturally as she began to spasm.

He picked up her eight-stone body, threw her over his shoulder and carried her to the rear of the waiting black Mercedes. He released the boot and stared in admiration at the immaculate thick black plastic-lined interior. Without effort he dumped her into the prepared space. Smiling, he pulled out a ten-inch serrated knife from inside his coat and gently caressed the gleaming blade against the faint pulse in her neck and then slowly ran the tip down towards her full, pert breasts.

‘Later,’ he muttered in a heavy Eastern European accent before slamming the boot of the car shut.

He then looked around the shadowy street checking to see whether anyone was about. Nobody. The street was in darkness. He expected as much. It was after two-thirty in the morning. But he knew they had been lucky. This time.

Moaning, she lifted her aching head up off the cold tiled floor. It was dark, too dark to make anything out. The acrid stench of urine filled her nostrils. In the background, the razor-sharp noise of dripping water echoed again and again.

She tried to remember what had happened but her head hurt too much. It felt heavy and foggy. It took her a couple of moments to realise that she was cold, very cold, and another few more before she became aware that she was naked. An overwhelming sense of panic started to build. She couldn’t figure out where she was or how she had gotten there.

All she knew was that she was hurting. Really hurting.

She tried to swallow and gagged, forcing saliva and blood to dribble out the corners of her mouth. She attempted to gulp back the thick, metallic taste in her mouth but found herself choking. She knew something was wrong as blood continued to pool at the back of her throat.

Panicking, she staggered to her feet, causing a searing white burst of pain in her abdomen. She instinctively placed her hands over her stomach and felt a warm stickiness. She ran her fingers across the gnarled slash realising that it ran from hip to hip. Horrified, she slipped on the wet floor, falling backwards.

The only noise emanating from her mouth was a gurgling splutter as she continued to choke.

Suddenly the door was kicked open and harsh light from the hallway flooded the men’s urinals.

‘Fucking hell!’ muttered a male voice as he took in the carnage in front of him.

‘Get Madley! And I mean now!’ he shouted as he ran over to her thrashing body.

He knelt down beside her and gently moved her into the recovery position, ignoring her moans of agony as he turned her. She suddenly began convulsing. With two fingers he started to pull out the blackened blood clots which were choking her.