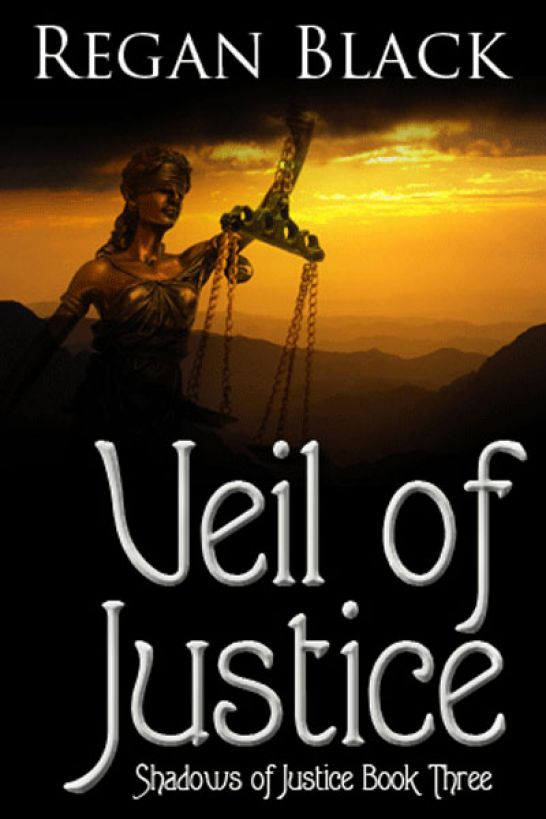 Published by Getaway Reads at Smashwords

This book is a work of fiction. Names,
characters, places and incidents are either products of the
author's imagination or used fictitiously. Any resemblance to
actual events, locales, or persons living or dead, is entirely
coincidental. All rights reserved. No part of this book can be
reproduced or transmitted in any form or by any means, electronic
or mechanical, without the express written permission from the
author.

This ebook is licensed for your personal
enjoyment only. This ebook may not be re-sold or given away to
other people. If you would like to share this book with another
person, please purchase an additional copy for each person. If
you’re reading this book and did not purchase it, or it was not
purchased for your use only, then please return to
Smashwords.com
and purchase your own copy.

Discover other titles by Regan Black at
Smashwords.com
:

From the Ashes
(Shadows of Justice
)

For all my fans, friends, and family who
insisted I go back and get Nathan out of prison.

From her perch above Miriam's tomb, the
goddess looked over the dead city of Petra. So unfair that she was
tethered here while the world moved on without her. Oh, her reach
was vast, but what she needed, what she so desperately wanted,
she'd yet to find.

Her power grew stronger as the sunlight faded
and still she waited, trusting the wisdom of patience so close to
the end game.

Assistants, minions really, came and went
with various reports of successes and failures. Success she
rewarded with another day of life. Failures died, slowly, as blood
and brain were siphoned away with delicious precision.

The demon goddess known by many names licked
her lips and listened for the clue that someone must unveil.

She crooked a skeletal finger in
invitation.

"The map box has been found."

She straightened to her full height, still
waiting, rather than shout with premature joy. "Show me this."

The speaker approached, a woman she noted,
head bowed as was proper. She signaled the guard to hold her,
ignoring the screams as she peeled away scalp and bone to touch the
brain itself.

Life flowed up through her fingers and the
prized knowledge with it. Her messenger had caught the eye of a
well-built young man, and enticed him to share his secrets. Not
all, to the man's credit, but his look alone was enough to
investigate further.

There were not many left with the strong jaw,
dark eyes, and innate solitude that marked the guardian lineage.
His name slipped into her consciousness, Darius. A fine young man
with worthy goals, but his inexperience would cost him.

Nin thought briefly of the countless men and
women she'd sent searching for the Guardians when those she'd sent
after the specific treasures never returned.

After all this time, after so many bargains
struck and broken, she had what she needed.

To honor the messenger, she made the kill
swift, leaving the husk of the body to her guards. They must move
quickly, before young Darius wised up. Nin wished for days long
gone when she would have had her choice of generals to set to this
task.

She vowed those days would return, her
worshippers would once more fill this city and many others, but for
now, only one of her servants was equipped for such a strike.

In wartime, truth is so precious that she
should always be attended by a bodyguard of lies. Winston
Churchill

Kelly sighed under the soft assault of his
lips against her neck. The reaction set fiery tingles racing down
her arm, her side, to her toes. His hands traced her ribs, sending
her other side into delighted spasms. It was too much, too
overwhelming. And every inch of her prayed he wouldn’t stop this
time.

He hovered, deftly evading her touch. She
ached for the feel of his firm, hot flesh in her hands. She moaned,
her breath mingling with his, her desire shifting into an all new
gear. They’d never shared so much. In all his visits, they’d never
risked a physical declaration like this.

God, what had they been waiting for?

"Nathan," she murmured, arching into his
touch. Her body ignited under his, hungry for everything he could
give, eager to give him everything she had in return.

Her clothes fell away and she lay bare before
him, body and soul. She felt no shame, no hesitation, only need.
She could do this, this which she’d never done before. With him she
could, and would, find that blissful union perfected by the joining
of two matched hearts.

An alarm sounded. Not anything like the
fireworks or musical crescendos she’d expected from song lyrics and
steamy books. Harsh and shrill it badgered her dreamy senses into
submission.

Regretfully, she pulled away from her
pleading lover to deal with the alarm.

Nathan Burkhardt dropped from the delectable
dream with a resounding thud. How could she? He knew she’d been
enjoying it as much as he. He knew it because he’d been right there
in her head with her. So why shove him out and away when they’d
been on the brink of something so unprecedented and stunning he
wasn’t sure they’d ever get it back.

He growled and rolled over to stare at the
smooth gray wall of his cell. Knowing the volatility of his
imprisoned life, he couldn’t believe she’d left him. She was smart.
Smart enough to understand every moment they had might be the
last.

"Wax poetic much?" he muttered, pitching his
voice too low to be overheard by the guards – human or
electronic.

She might’ve broken their unique contact
because she’d been scared. He’d sensed her innocence moments before
she vanished.

He ached for her more knowing that detail.
She’d been ready for him. Just for him. Then she’d just been gone.
It must be fear.

Calming down a bit, Nathan reached out across
space, looking for the woman who kept him sane in this hell-hole,
but she was completely unavailable, as if she’d never existed at
all. No. It couldn't be illusion. He was not losing his mind to the
circumstance. He searched again and again came up empty.

He wanted to pound his fists into the wall,
to pound out his frustration with her, this damned mission, and
life in general. Doing so would only rouse his cell mate and the
guards. That combination was as likely to kill him tonight as a
wrong glance between inmates over tomorrow’s breakfast.

Nathan held himself in check, as he’d been
doing for too many long, long months. Through sheer willpower he
restrained the urge to shatter the prison doors and simply walk
out. Lately he’d been so full of pent up fury he might be strong
enough to do it.

Boots sounded in the hallway, stomping
closer. Deep voices were quiet, but unmistakably angry. In self
preservation, Nathan feigned sleep, refusing to turn from the wall
even when his cell door rolled open with a rasp across the
track.

Nathan rolled out of his bunk before the
officer finished barking the order. He held his hands out, palms
open and down, waiting for the shackles.

They wouldn’t care that he was unaware of any
violations he might’ve unwittingly committed. The hierarchy in
prison was simple: guards followed a chain of command, prisoners
followed guard orders. It only got complicated when you showed a
streak of independence – or when you didn’t have anything of value
to pay off those who could make life easier.

With nothing of value beyond his loose grip
on sanity, Nathan kept his eyes down to hide both his contempt and
his remaining courage as the wrist shackles locked tightly into
place.

He let them push him roughly down the cell
block, cooperating only as much as he dared. It was a fine,
exhausting line he danced on. Anything would set them off. Too easy
and the prisoner was mocked and abused. Too stubborn and the
prisoner could wake up in the infirmary days later with extensive
inexplicable injuries.

So Nathan trudged behind one guard, flanked
by two others. They didn’t have to say anything for him to know
they were angry and for the umpteenth time since this agonizing
assignment began, he wished for his sister Petra's empathic
talents. Her ability to absorb and diffuse intense emotions would
go a long way to ease this tour of duty.

All thought vanished as the guards turned him
down a narrow hall. They weren’t going to the warden’s office as
he’d hoped. The smell tipped him off before they even reached the
doubled chain link door. They were sending him to solitary.

Solitary confinement was an earthly hell
supposedly banned as part of the prison reform act of 2052. Nathan
had boned up on prison reform ideals, the reality, and prisoner
rights in preparation for this mission.

He’d heard the rumors about solitary, and
shrugged them off, knowing this facility had passed codes
inspection just a few months prior to his incarceration. He’d
actually relished his mission, knowing whatever he did in the
pursuit of justice, solitary was one horrific threshold he wouldn’t
have to cross.

But now the doors slid open, the guards
shoved him through to the staff on the other side, and Nathan
panicked for the first time in his near-thirty years of life.

His wrist shackles burst apart and fell to
the floor. The gruff voices went silent as guards stared,
dumbfounded. Using the momentary surprise, Nathan envisioned his
path to freedom, but the guards recovered too quickly. Voices rose
on a tide of foul curses, burly bodies swelled up from all sides,
and Nathan, weakened from months of prison life collapsed under
their brutal methods.

"She’s dead," Petra Callahan said when the
latest lead on her missing assistant, Kelly, petered out. "She must
be. She’s completely off the radar. Including mine."

Jaden's assurances rang hollow in her own
ears. More than six months had passed without any word from Kelly
and Petra was losing hope fast. In addition, she’d taken to
muttering about her naiveté for blindly trusting a woman she
apparently hadn't known very well at all.

"I thought this lead on Nathan's Mustang had
real potential," Petra confided quietly.

Jaden nodded, looking for some way to comfort
her sister. A hug not only seemed inadequate, as sensitive as Petra
was to every emotion these days, the physical contact might cause
more harm. Jaden had plenty of memories rolling around in her head
that her empathic sister just didn’t need to encounter.

Feeling helpless, Jaden turned her attention
to the holographic map of the United States projected at the end of
the library work table. A small red dot marked every report on
vehicles like the one Kelly was last seen driving toward
Indianapolis. Green spots of color showed potential sightings of
Kelly herself. So far, every sighting had been bogus. Where could
the woman have run off to with an antique car? More importantly why
had she run off at all?

Jaden spared a glance at Petra, eyes still
glued to a computer monitor as she zipped through a continuous
stream of email. Praying Petra stayed distracted, Jaden replaced
the map image with a spread sheet of facilities using security
programs created by Randall Burkhardt, Petra’s father.

The man’s genius had revolutionized
electronic banking and provided nearly faultless locking systems
for vaults, prisons, and labs around the world. In short, if you
wanted it safe, you used Burkhardt code.

Bucking the general consensus of their team,
Jaden felt this was how they’d eventually find Kelly. Shortly after
Petra's assistant disappeared, so had the Burkhardt client list,
along with his formulaic notes about his work.

Those facts, combined with a total absence of
financial or personal history for Kelly older than five years, had
Jaden cringing at the ramifications.