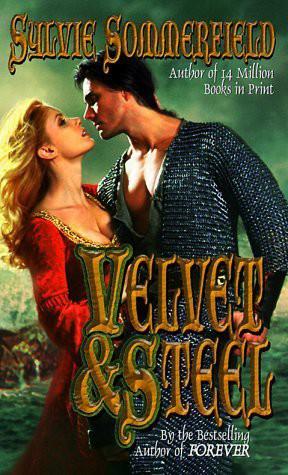 She could not resist one single touch. Slowly, She rose on tiptoe,and touched her lips to his. If Royce had been jolted by desire before, it was nothing compared with the force that unleashed itself now. He moved back from Lynette just a fraction, but enough to break contact.

"You must be careful, Cherie. Or you will make me think you are more anxious for this wedding than you have led me to believe."

Lynette was startled by his sarcasm. She saw now in his eyes that his shields were in place. She felt heat rush to her cheeks, and a sense of shame filled her. Was she begging for his touch? She could not deny the truth of it, any more than she could deny that she would have gone into his arms, if he had given one sign that he wanted her there.

Other
Leisure
books by Sylvie Sommerfield:

Two men sat together in a room lit only by a low-burning fire that cast the room in shadow. The furnishings could be seen vaguely, enough to show that the place was sparsely furnished... a warrior's dwelling.

These men were not often alone where unwelcome ears could not overhear their conversation. They were taking advantage of this rare opportunity to discuss a weighty problem.

They had been drinking together through most of the long night, although both held their ale well and showed no sign of its use. They were companions. Men who had lived, fought, and survived together. They had spoken of the battles they had won and the few they had lost. But past memories had been put aside; now they spoke of the purpose that had drawn them together.

Although these two resembled each other in many ways, there was a subtle difference that went beyond hair color or features. It would take an experienced eye very little time to discern that the larger, older man displayed deference toward the younger. It was clear in the way he spoke... and in the respect displayed as he listened.

Robert Debayeaux was a man of massive proportions, wide shoulders, and strong muscles. His face was a contradiction ... old, yet vital. The eyes registered many experiences, not all good or kind. Yet they could smile and soften... they just hadn't recently. His hair was a deep brown, with streaks of gray at the temples, and his eyes, a shade of gray that would match a stormy sky.

The younger man had an aura of restrained energy. His blue eyes were piercing, and could be cold enough to freeze the heartiest soul. He was handsome, but not with the handsomeness of a courtier. His was a beauty of strength and grim determination. His clothes gave evidence of his position, for he dressed, not like a soldier as the older man did, but like one of royal blood who wore rich clothing with an ease the older man could never achieve. He was a commanding man, tall and broad of chest and shoulder. His arms were all taut muscle. Muscle acquired by the expert and regular use of a sword and lance.

William the First was a conqueror, and his posture and aura of confidence gave evidence of it. The Battle of Hastings had been over for nearly a year and he was the victor. That pleased him. What didn't please him was a new and serious problem that had just been brought to his attention by one of the few people he trusted completely, Robert Debayeaux. He turned to face his friend.

"What think you, sire?" Debayeaux said. " 'Tis a place that needs protection. We cannot let the wrong hands take control. It is a typical Saxon manor, hard to defend and in need of work, but the location makes it an excellent place for you to build something more substantial. The manor sits on a rise, overlooking a harbor that could prove of great benefit to you, and might cause no end of difficulties for you should an enemy decide to land a force."

"There is no doubt we must do something, but what? The man, this Eldwyn of Creganwald, has not fought our possession, and I think he would like to live out his old age in peace," William replied.

"That is so, but neither will he fight to protect what is no longer his. The manor's strategic position could prove a liability if you are not completely sure of the man who holds it."

"We can't let that happen. We need a warden, one who can build something defensible, and hold it."

"Was there not a young daughter?"

William paused, then turned to look at his friend, and smiled. "By God, you are right. And of marriageable age if I'm not mistaken."

"Yes. Her name escapes me at the moment."

"What do we care of her name? She's of marriageable age, and that is the answer to my dilemma!"

"No, sire. That is only half the answer. Who do you have in mind? Who do you trust enough to take her and eventually, at her father's death, her holdings in marriage?"

"Ah, must one problem always create another?"

"It usually does," Robert chuckled.

"There are not many who do not suffer from greed. I must choose someone who does not seek to enrich himself at my expense."

"Unless? Come man, if you have an idea, share it with me."

"I was giving thought to Royce."

"I know his loyalty, and his ability to fight well, but..."

Robert looked at William closely, then considered his words for a moment before he spoke. "I know. It has been only a few years since he lost his wife. He adored the woman, and I do not wonder at it. She was not only beautiful, but completely devoted to him. He has been my ... our friend for a long while. I know he has never put her memory away, nor has he looked at another."

"Then why do you bring up his name?" William asked.

"Because those who care for him wish to help him past this grief he refuses to let go of. It is as if he had followed her into the grave."

"Perhaps," Robert spoke softly, "in the hope that an enemy will do for him what the church will not allow him to do for himself."

"He thinks to die in battle?" William asked with surprise.

"That is my belief. He is at the forefront of every attack, he is the first over the walls, and he wields a sword without care for his own safety. He has not gained death, but he has gained a reputation that creates fear in your enemies."

"And he is too valuable a man for us to lose."

"Aye, my lord, much too valuable."

"Then I shall discuss the matter with him at once."

"If you form this as a request, he will refuse."

"He shall certainly think me the most ungrateful lord he has ever served."

"Better to think that than to go on trying to destroy himself. He will not be able to refuse a command from the king to whom he has sworn his sword and his honor, too, no matter how unwelcome it might be. He will be furious ... but he will be a good warden, a good husband, and the most loyal servant you have ever had."

"Will he be a good husband... forced to the altar?"

"Perhaps not, but he will not dishonor you or the lady. That will do well enough."

"And what of the lady?" William said, considering his own wife, Matilda, who had married him despite his bastardy, and whom he loved with a devotion and loyalty that surprised many.

"My lord, we can only put her in the safest hands we know. At least we will not have to worry about her loyalty. He will see to it. She could do much worse than that."

"Aye, she could marry a brute who would murder her for her lands. Is her father in good health?"

"Reasonably, sire. He was very ill last winter. He is also of an age when he knows his lands are unsafe. Perhaps he will agree to the marriage and make your task easier. She will not disobey her father ... or her king."

"You are a wise old fox. You guard my holdings, protect a man whom I believe you have come to respect. You mend the problems of a comrade in arms... and supply a husband for, I imagine, a very beautiful lady. Is there no end to your good works?"

"I know, Robert, I know," William said softly. "You are truly the most valuable friend I have. A man I can trust. Send word to Royce. I would see him as soon as he can come."

"Robert, I hope Royce will understand, and not place the blame on you. I would tell him this is my choice alone."

"I would go with him. He has become like a son to me. Even if he chooses to place blame ... I would be with him."

"If I remember right, there is some question of Royce's parentage?"

"Aye. His parents are unknown. But that has not stopped him from great accomplishments, and bringing great honor to his name. He has used his abilities with honor, instead of selling his sword to any bidder as most bastards do."

"Even you, old warhorse?"

"Know you who his father is, Robert?

"If I commanded it?"

"It is a name I shall take to my grave, sire ... no matter what causes my death," Robert replied. He knew quite well that William, a bastard himself, would understand and not press the matter.

"I am glad I have you at my back, Robert," William said quietly.

"Let us drink a toast then." Both men raised their horns of ale.

"To the marriage and to the settling of at least one problem in this world of problems."

Both men drank, but Robert was not too sure any problems had been settled. He was giving great thought to the wording of the king's order to Royce, and wishing he did not have to be the one to carry the message. He already knew how it was going to be received. He alone knew the depth of Royce's agony. He had suffered with him, watching his silence and his loneliness grow.

He thought of the secret he kept, even from Royce, and the reasons for it. He was proud that Royce had risen above his birth, just as William had done. He also knew that Royce's father was just as proud, and just as crushed that he could not claim Royce as his son.

Robert's dearest wish was that one day the secret might be brought to light. In time, maybe, but for now he would be Royce's friend and mentor for as long as he was needed. He prayed he wasn't making a great mistake with the idea of this wedding. Maybe it was Lady Lynette who would need his prayers, for Royce's heart had been frozen for too long. For now, he must go to Royce, and be with him when he received the request ... no, the command that would change his life.