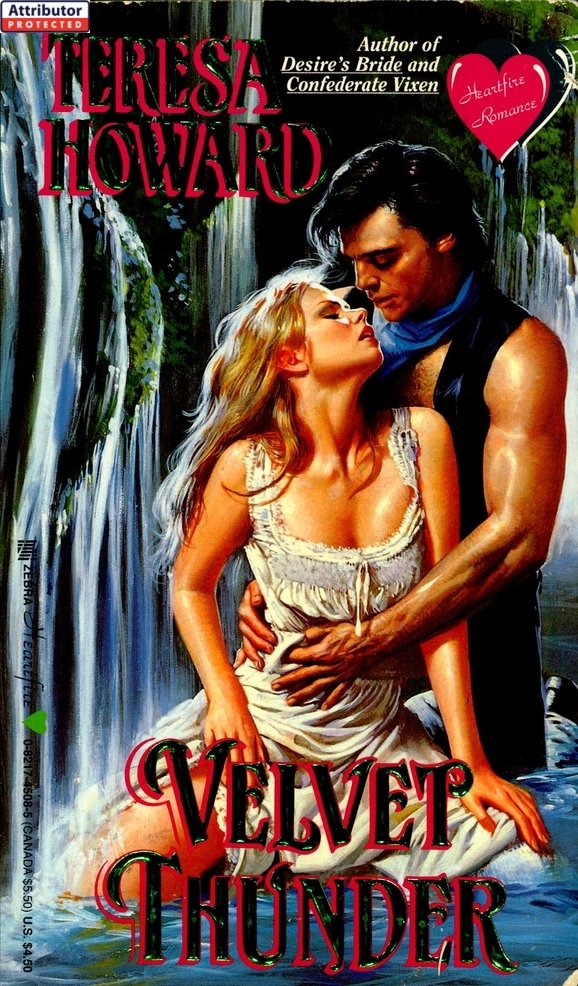 A MASQUERADE
Pilar led Heath into the kitchen, where Stevie awaited him. Stevie was as nervous as a cat. Just being in the same room with the gambler unnerved her.
At first she refused to look at him. When she did, the first word that came to mind was
beautiful.
But how could a man so masculine, so physically overpowering, be beautiful? If Preacher Black could be believed, Lucky Diamond was a violent manâa man who ate innocents like her for breakfast.
Heath smiled down at Stevie. She just stood there, resembling a wide-eyed, frozen goddess. He reached for the small hand fisted at her side. He pulled it forward, pumped it up and down as one would work a reluctant well handle.
He couldn't bring himself to release her immediately and cradled her hand in both his own. She curled her fingers, making their contact more intimate. Heath was mesmerized, his eyes riveted to the small hand.
How could he have failed to notice her Comanche heritage at their first meeting? Her Indian features framed by her platinum hair made her quite possibly the most beautiful woman he had ever seen. When he smoothed her fist and kissed her palm lightly, he was gratified by her sharp intake of breath.
Straightening, he released her. He produced a bowie knife and presented it to her with mocking gallantry. “I believe this is yours.”
“I was amazed at how well you handled yourself yesterday when you sidestepped my knife.” Her cheeks flamed. “And, Mr. Diamond, I'm truly glad you did.”
Â
Â
“A read that keeps your heart thundering with pleasure . . . Teresa Howard gets better with every book!”
âJanelle Taylor
SURRENDER TO THE SPLENDOR OF THE ROMANCES OF. F. ROSANNE BITTNER!
Available wherever paperbacks are sold, or order direct from the Publisher. Send cover price plus 50â  per copy for mailing and handling to Penguin USA, P.O. Box 999, c/o Dept. 17109, Bergenfield, NJ 07621.Residents of New York and Tennessee must include sales tax. DO NOT SEND CASH.
TERESA HOWARD
VELVET THUNDER

Slammed by Hoover, Colleen
When I Found You by Catherine Ryan Hyde
Christ Clone by McLeod, David
Immortal's Eden by Lori Perry
A Season for the Dead by David Hewson
The Bourne Identity by Robert Ludlum
Magic Bleeds by Ilona Andrews
Baby Geisha by Trinie Dalton
King of the Godfathers: "Big Joey" Massino and the Fall of the Bonanno Crime Family by Anthony M. DeStefano
Mass Extinction Event (Book 2): Days 9-16 by Cross, Amy