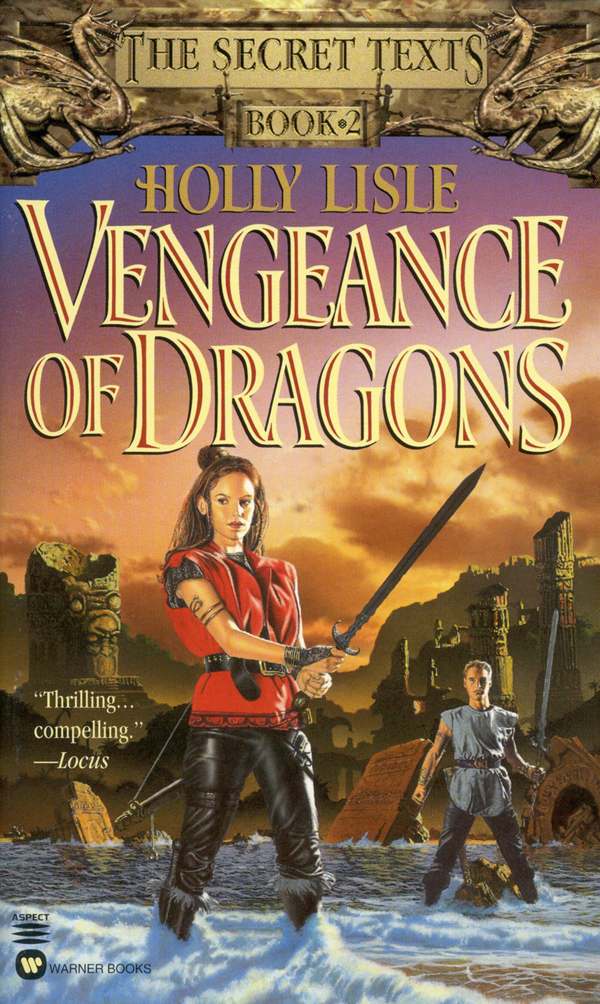 This book is a work of fiction. Names, characters, places, and incidents are the product of the author’s imagination or are used fictitiously. Any resemblance to actual events, locales, or persons, living or dead, is coincidental.
VENGEANCE OF DRAGONS
. Copyright © 1999 by Holly Lisle. All rights reserved. No part of this book may be reproduced in any form or by any electronic or mechanical means, including information storage and retrieval systems, without permission in writing from the publisher, except by a reviewer who may quote brief passages in a review.
For information address Warner Books, Inc., Hachette Book Group, 237 Park Avenue, New York, NY 10017.
Aspect
®
name and logo are registered trademarks of Warner Books, Inc.

A Time Warner Company
The “Warner Books” name and logo are trademarks of Hachette Book Group, Inc.
ISBN: 978-0-7595-2013-4
A trade paperback edition of this book was published in 1999 by Warner Books.
First eBook Edition: December 2000
Visit our Web site at
www.HachetteBookGroup.com
To Joe, with love and gratitude
Acknowledgments
Again, thanks to Peter James and Nick Thorpe, authors of
Ancient Inventions,
which has proved the most inspirational and useful book I’ve read in ages; to Betsy Mitchell, whose editing, recommendations, comments, and questions made the book far better than it would have otherwise been; to Russell Galen and Danny Baror, whose tireless work in my behalf made my first European sales happen, and made it possible for me to live off my writing income, and in Russ’s case, inspired the project in the first place; to Matthew, whose first-draft editing also resulted in major changes and major improvements, and whose encouragement keeps me going; and to Mark and Becky, who did all sorts of useful and kind things for me while I was writing that made my life easier, and who cheered me up when the work got hard. And finally, belated thanks to John “JT” Tilden and Perry Ahern for cheerfully providing the bodies.

In
Diplomacy of Wolves . . .
Magic, in the world of Matrin and especially in the Iberan lands where the last of the true humans live, has been a study both forbidden and reviled for a thousand years—but Kait Galweigh has survived to hide the secret Scars of old and dangerous magic. A daughter of the powerful Galweigh Family and a promising junior diplomat, Kait is Scarred. Her nature causes her to skinshift, a trait which would lead to her immediate execution even by members of her own Family. Chaperoning her cousin prior to the girl’s wedding into the Dokteerak Family, Kait overhears a plot between the Dokteeraks and the Galweighs’ longtime enemies, the Sabirs. The Families are planning to destroy the Galweighs at the upcoming wedding.
Kait survives a harrowing escape from Dokteerak House with her information, aided by a stranger who, like her, is Scarred by the skinshifting curse called
Karnee.
She is drawn to the stranger and is dismayed to discover that he is a son of the Sabir Family, her Family’s oldest and worst enemy. She returns to the embassy, where she informs the Galweighs of the Dokteerak-Sabir treachery, and tries to put her attraction to the Sabir Karnee out of her mind. Her Family takes both military and illicit magical steps to foil the conspiracy and crush the conspirators. The Sabirs, though, never planned to share power with the Dokteeraks; instead, they use them to get the Galweigh military out in the open. Then, on two carefully managed fronts, they wipe out the Dokteerak and Galweigh armies and use both treachery and magic to capture Galweigh House back in the grand city of Calimekka.
However, magic used forcefully against another always rebounds. Both Families’ wizards, who call themselves Wolves, expected to strike unprepared targets with their spells. But their attacks hit each other at the same time, and the magic rebounds, wiping out the majority of both Families’ Wolves.
It simultaneously does two other things as well, both seemingly irrelevant. First, the magical blast wakes an artifact called the Mirror of Souls. A beautiful and complex creation designed by the Ancients before the end of the Wizards’ War a thousand years earlier, the Mirror has been waiting for just such a powerful
rewhah.
It signals that the world has returned to the use of magic . . . and more importantly, magic of the right sort. The Mirror awakens the souls it holds within its Soulwell, and they reach out to people who might be able to help them.
Second, the
rewhah
horribly Scars a young girl named Danya Galweigh, a cousin of Kait’s, who has been kidnapped by the Sabirs and used as a sacrifice by the Sabir Wolves when the Galweighs fail to meet the ransom. Danya is changed beyond recognition, and the baby she unknowingly carries, a baby conceived through rape and torture during her capture, is changed, too, but in more subtle ways. The force of the
rewhah
throws Danya into the icy southern wastes of the Veral Territories, where, were it not for the help of a mysterious spirit who calls himself Luercas, she would die.
Kait finds Galweigh House in Sabir hands and many members of her Family executed. She steals the Galweigh airible and flies for help to the nearby island of Goft, where the Galweigh Family has other holdings. However, the head of this lesser branch of the Galweigh Family sees the demise of the main branch as his chance to advance, and he orders Kait killed. A spirit voice claiming to be her long-dead ancestor warns her of the treachery, and she escapes again, this time after stealing money from the House treasury.
The spirit tells her another way she can aid her Family, even though it says they are now all dead. Following its advice, she hires a ship from the Goft harbor to take her across the ocean in search of the Mirror of Souls. The spirit tells her that this ancient artifact will allow her to reclaim her murdered Family from the dead. She enlists the aid of the captain, Ian Draclas, by telling him she is going in search of one of the Ancients’ lost cities. Such a place would make any man’s fortune.
Onboard the ship she runs into a man named Hasmal rann Dorchan, whom she once met briefly. Hasmal, a wizard of the sect known as the Falcons, had been trying to escape the doom that an oracle had warned would befall him if he associated with Kait. He is not pleased to see her.
Hasmal’s oracle mocks him and warns him that to protect himself, he must teach Kait magic. She learns, but denies the existence of the doom-filled destiny he claims they share.
Kait is plagued by dreams of the Sabir Karnee; she becomes certain that he is following her across the sea. To break her obsession with him, she accepts the advances of the ship’s captain, and she and Ian Draclas become lovers. But her obsession only worsens.
As the ship nears its destination, it sails into the heart of Wizards’ Circle, a place where magical residue from the Wizards’ War a thousand years before is still so strong that it can affect and control anyone moving within its reach. Hasmal works magic to free the ship, and Kait, in her skinshifted form, saves the life of the captain. In so doing, though, Kait is revealed as a monster and Hasmal as a wizard, and the crew turns against them. They reach the shore and discover the city, but while Kait, Hasmal, Ian, and two of his men set out to retrieve the Mirror of Souls from its distant hiding place, the crew mutinies and maroons them in the unexplored wilds of North Novtierra.

Rath's Gambit (The Janus Group Book 2) by Piers Platt
Crooked by Brian M. Wiprud
Chihuawolf by Charlee Ganny
Coming Up Daffy by Sandra Sookoo
Sorry, Charlie (Poconos Pack) by Dana Marie Bell
Amidst the falling dust (The Green and Pleasant Land) by Kennedy, Oliver
Pureheart by Cassandra Golds
Small Beneath the Sky by Lorna Crozier
The Code Within: A Thriller (Trent Turner Series) by S. L. Jones
Maybe This Time (The Educators Book 3) by Kathryn Shay