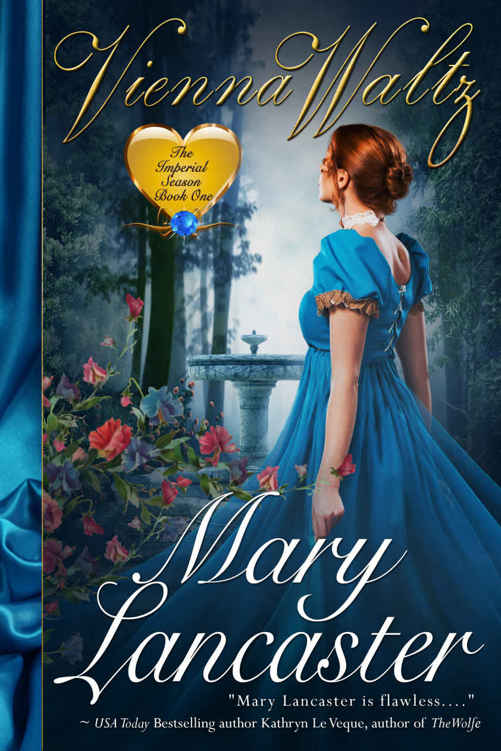 All rights reserved. No part of this book may be used or reproduced in any manner whatsoever without written permission, except in the case of brief quotations embodied in critical articles or reviews.

T
his
was the
man she needed.

He stole blatantly, yet with such speed and composure that Lizzie almost missed it. In fact, she wasted nearly four precious seconds before the realization hit her.

In mitigation of her uncharacteristic slowness, she had many distractions in Vienna’s gorgeous Theatre an der Wien. Quite aside from the pretty ballet on the stage and the exquisite music that went with it, the theatre’s sumptuous blue and silver furnishings were a feast for the eyes in their own right, as were the beautiful pastel gowns, glittering jewels and dazzling, gold-braided uniforms of many in the audience.

Lizzie had only arrived in Vienna with her siblings, aunt, uncle and cousins the day before. Despite exhaustion after the arduous journey, she was enchanted by everything from the historic and picturesque narrow streets of the inner city, to the sophisticated fashions of the European elite who still flooded into Vienna for the peace conference. She was quite happy to sit behind her family in their private box, so kindly donated for the evening by the British Ambassador Sir Charles Stewart, and observe the wonders, leaving her cousin Minerva to display her charms at the front beside her mother and brother.

It crossed Lizzie’s mind occasionally that she might actually be embarrassed to be seen in her old, ridiculously unfashionable dress. Not that she cared for clothes and primping and displays of jewelry—really, she didn’t—but she had no wish to be ridiculed. Besides which, she had plans to make. So she sat back in her seat, letting the music surround her, and divided her attention between those plans, the stage dancers and the audience.

The theatre was packed and rather stuffy in the unseasonably warm October evening. Young men propped up pillars and doorways in the pit, many making eyes at the dancers on stage or the pretty young women seated close by. Some aimed higher, at the wealthier ladies in the tiers of boxes surrounding the stage. Lizzie thought Minerva drew a little attention of her own, which would gratify Aunt Lucy.

Of course, Lizzie’s sister, Henrietta, even at her present tender age of fifteen, would have eclipsed Minerva and all other females present, too. But there was no point in brooding over ill fortune that none of them could do anything about now. If the old gentleman had only followed everyone else’s advice about that wretched horse that had thrown and eventually killed him…but she refused to dwell on that. She and her siblings might have lost their father and their home, but Lizzie hadn’t lost her wits and she was determined to win another home so that her sister—all of her siblings, in fact—could choose their paths from a position of at least minimal comfort.

More than once since they’d sat down, Lizzie’s attention had been caught by the lady in the next box. A young matron, fashionably dressed in white with dramatic splashes of scarlet trim, she was one of the loveliest women Lizzie had ever seen. Not surprisingly, male companions surrounded her and she was being openly quizzed by several gentlemen in the pit as well as more discreetly by Cousin James. Lizzie wondered who she was; although when James mumbled an excuse and bolted from their box—presumably to fight his way into the beauty’s instead—she rather thought she’d find out in more detail than she’d ever need.

It was as she waited expectantly for James’ lanky figure to appear next to the unknown lady that the robbery occurred.

The music, at that moment, was particularly rousing, distracting Lizzie just as a very un-James-like man pushed unceremoniously through the throng in the beauty’s box. She had an impression of someone large and dark and improperly dressed in no more than mud-stained shirt and breeches.

Then, before Lizzie, or anyone else by the look of things, had even registered his surely alarming presence, he went right up to the lady, grasped the delicate chain of the necklace around her pretty throat and tugged.

For the smallest instant, the lady gazed up at the thief, wide-eyed with shock. His lips moved, speaking only one syllable, but already he was turning away, incongruously casual. And the next moment, he’d vanished, leaving the lady gasping and clutching her suddenly bare neck.

Lizzie blinked.
Did I really see that?

A few startled exclamations in German from the surrounding boxes convinced her she had.

And then the truth crashed into her. This was an opportunity that would never come again. And she was letting him get away.

Without so much as a glance at Aunt Lucy or Minerva, Lizzie sprang up and left the box. A flash of grubby white disappeared around the corner of the corridor. Lizzie flew after it. As she passed the victim’s box, she heard a female voice say in French, “Oh, ignore it. I have another just like it. Besides, the police will catch him.”

How wonderful to be so blasé!
Lizzie thought as she raced past a few lounging men, one or two of whom may have tried to speak to her. Too focused on her quarry to pay them any attention whatsoever, Lizzie gained the staircase in time to see the thief running down the last few steps to the bottom. Bizarrely, he didn’t even look like a fugitive, just a man in a hurry. In fact, he was whistling as he crossed the grand foyer, as if mightily pleased with himself. He even called something in a friendly voice to the doorman as he strode out.

However, by the time Lizzie reached the foot of the staircase, the hue and cry had gone up from the top. One of the victim’s numerous male escorts was shouting the German equivalent of “Stop thief!”

Inevitably, a gaggle of staff began to close in on Lizzie.

Oh, drat the fools, how will I catch him now?

Fortunately, the same German voice fumed, “Not her, you idiots! The man with no coat! After him!”

At least Lizzie imagined that’s what he said, for the approaching staff suddenly sprang in the opposite direction, like deer started by a shot. Lizzie was able to escape close on their heels, even to slip by them as they stopped outside the doors and asked each other questions about who they were looking for, what he’d stolen, and from whom.

Spying a shadow vanishing around the corner of the theatre building, Lizzie hurried after it. She knew she was running out of time. Everyone said Vienna was full of police and police spies, and she couldn’t imagine any of them taking the blatant theft of a lady’s necklace very lightly. And sure enough, voices and footsteps were converging from all directions. Lizzie clutched her flimsy shawl more tightly around her shoulders, walking as fast as she dared along a street full of abandoned carriages belonging to the theatre patrons. A few coachmen were gossiping and smoking together; others must have sloped off to the nearest tavern. She wondered if their own Viennese coachman, Wilhelm, was among them, but was too occupied to look.

She glimpsed the thief still some yards ahead of her, striding down the road, hands in pockets. She even heard the whistling blown back to her on the wind. But the footsteps behind were growing quicker and louder. One of the pursuers said in English, “He definitely went this way.” So far their quarry seemed to be hidden from them by the distance, and the shadows, and, perhaps, by Lizzie herself.

The thief glanced over his shoulder. He must have at least heard if not seen his pursuers, for she thought he laughed, although the sound could have come from one of the nearby coachmen. However, he was clearly a thinking thief, for he didn’t immediately bolt and draw attention to himself. Instead, he seemed to look about him as he walked. Then he paused, gazing at the crest on a waiting carriage. Lizzie hurried on. With a jolt of excitement, she realized the carriage was her aunt’s.

The man walked on, but at least his brief halt had given her time to catch up.

He turned and the glow from the nearby street lamp showed her black brows raised in surprise on a lean, handsome face. Although unexpectedly young, he gave off an air of recklessness and sheer danger that caught at Lizzie’s quickened breath. His hair looked wild and unkempt and his rather hard eyes glittered in a way she recognized.

No one was perfect.

She grasped the handle of the carriage door and yanked it open. “Get in.”

At that, a hint of confusion crossed his face, making him seem more boyish than dangerous. Which was some comfort, before a whole array of much more worrying expressions chased after it. She was fairly sure one of them was pure lechery and began to frown furiously to quash any such nonsense. Only then, his gaze shifted beyond her to the approaching police and their helpers. So far, the obstructive gaggles of coachmen and her own carriage door must have hidden him, for she could hear questions being fired at the servants farther back.

The thief drew in a breath that sounded suspiciously like laughter, strode the few paces toward her and leapt nimbly inside. Lizzie followed, closed the door behind her and sat on the other bench. It wasn’t the most comfortable carriage in the world, but it had carried her across Europe already, so at least it gave her familiarity to hang on to.

“You had better hide under the seat,” Lizzie advised.

“Are you coming, too?” he inquired out of the darkness in the opposite corner. He spoke in English, surprisingly, although with a hint of foreign intonation she couldn’t place.

“Of course not,” Lizzie said with dignity. “
I
didn’t steal anything.” She peered out of the carriage window. The pursuers had stopped some yards back, some gazing up the street, some in earnest conversation with the nearest coachmen. She thought one of them was Wilhelm and prayed he hadn’t spotted her. Providing neither he nor anyone else had seen them enter the carriage, she thought they were safe.

The theatre staff among the group began to drift away, back to work, she supposed.

“I think they’re giving up,” Lizzie said in relief.

In the darkness, the thief seemed very still. “What makes you think I did?”

Frowning, Lizzie turned her head toward the shadowy figure in the corner. “Did what?”

“I saw you,” Lizzie said dryly. “Half the theatre saw you.”

“Rather less, I should think,” he argued. “But never mind. Given that you saw me, why are you hiding me?”

Lizzie took a deep breath. “Because I want you to steal something for me.”

The figure opposite stirred. His boots scraped against the floor as if he were stretching his legs out. “What do you want me to steal?” His voice wasn’t quite steady. He might have been laughing.

“A necklace,” she said repressively.

“Ah. Because I’ve just proved I’m good at those?”

“No, no, it has to be a
particular
necklace.”

“I see. And from whom am I to steal this particular necklace?”