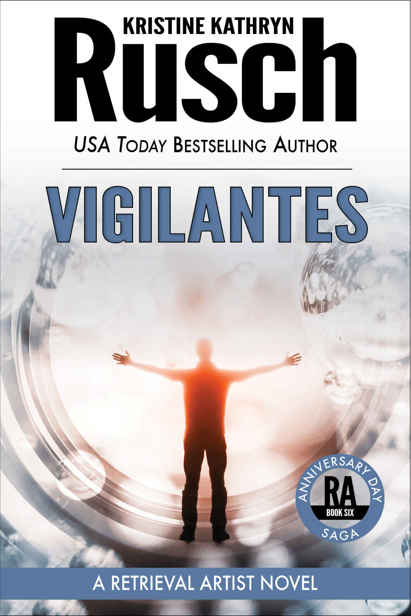 So many people have made this long project possible. Paul B. Higginbotham helped me design the legal system. I greatly relied on his expertise in this series. Annie Reed makes sure I remain consistent from book to book. Dean Wesley Smith lets me know if the plot falters. Colleen Kuehne monitors the details. Allyson Longueira designs the lovely covers, shepherds the books into production, and keeps track of all the publishing details. I couldn’t do this without any of them. Any mistakes you find, however, are all my responsibility. (And probably result from the fact that I didn’t listen to someone I listed above.)

I greatly appreciate the support from all of you readers. From the beginning of the Retrieval Artist series to the Anniversary Day Saga, you’ve stayed with me and kept me on track. Thank you so much!

I got horribly stuck when I reached the middle of the first draft of
Vigilantes
. Every single character showed up on the Moon with a story. It was rather like the first day of grade school after summer vacation, only the speeches could have been called, “Guess what I did on the way to the Moon?”

I didn’t want you to guess. I wanted you to know. Because everything these characters did was important.

Here’s where I need to put in the disclaimer:

If you bought this book without buying any of the others marked
Anniversary Day Saga
, then you’re entering book six of one long story. The story starts with the novel called
Anniversary Day.
You can start there, or if you want to read the first seven
standalone
books in the Retrieval Artist series, start with
The Disappeared
.

If you’ve read some of the standalone Retrieval Artist books and picked this one up thinking it will stand alone, I’m afraid it doesn’t. The Anniversary Day saga is one long story, and it runs for eight novels. I’ll return to standalone novels in the series after 2015.

What’s happening here is that in consultation with WMG Publishing, I’ve decided to release the remaining six books in the Anniversary Day Saga in the first six months of 2015.
Vigilantes
is the April release.

If you had asked me what came next after I finished
Blowback
, I would have pointed to some of the events in
The Peyti Crisis
, and some that you’ll find here. You’ll find others in the next two books.

As I wrote the remaining six books, I started with
The Peyti Crisis
, and tried to cram six books of material into one novel. So I split it off into
Vigilantes
, and as I wrote that book, I stalled.

I got tired of characters reporting on their adventures. I finally threw in the towel when a character walked into Flint’s office and reminded Flint of their shared history, then told a story of explosions and near death. You won’t find that scene in any of the books. At that point, I realized that I, as a reader, wouldn’t tolerate that scene, and I, as a writer, couldn’t finish it.

Instead, I wrote the sequence which, unsurprisingly, isn’t in this book. You’ll find part of it in
Starbase Human
(the next book) and even more of it in the final book,
Masterminds
.

And, I have to admit, writing the story the way it wanted to be written was so much fun.

Once I got
Vigilantes
on track, it proved to be the easiest book to write—and the most enjoyable. I hope you enjoy it as well.

THE GRAY DOOR before Claudio Stott had fifteen levels of protection on it. Stott knew because he had actually studied the manual for this part of the Forensic Wing of the Alliance’s Security Division. Most of the other candidates had downloaded the manual and used AutoLearn to figure out the massive information contained within.

The problem with that, of course, was that the other candidates gave similar answers to the verbal quiz Terri Muñoz gave them before making her final selection for this job.

Now that Stott stood in the corridor outside the most secure part of the Forensic Wing, he wasn’t certain he wanted this job after all. The door stood at the end of several long corridors, buried in the center of the starbase, and the first rooms beyond the door were clean rooms. He would have to use both a sonic shower and a shower with specialized liquid before entering and leaving the section, something not mentioned in the manual, because, apparently, it irritated everyone involved.

Muñoz told him that several employees of the section actually had gotten enhancements to keep their skin moist and to prevent rashes from the four-to-eight-times-per-day showers. The showers themselves sounded like wasted effort. Stott wanted to know why a decontamination chamber wouldn’t work better, one calibrated for foreign DNA.

Then, even as he had the thought, he realized the problem with his question. The Forensic Wing didn’t care about foreign DNA. They cared about the DNA that every single human being sloughed off through the course of every second of every day.

The showers, in theory, would prevent the sloughing long enough for the staff to don specially made environmental suits without contaminating the exteriors of those suits.

He should have known all of that; after all, he
had
studied the manual.

He looked at Muñoz. She was slight, her skin tending toward a greenish-olive that made her seem just a little ill. He had seen a holo of her from the days when she was first hired. Then her skin had been a creamy brown.

So many people looked different as they aged that he hadn’t attributed the change to anything. But now that he was contemplating half a dozen showers just to get to work, take his outside breaks, and eat his lunch, he wondered if that greenish-olive color reflected the beating her skin had taken after decades inside this facility.

This facility sounded so impressive. Special DNA Collections sounded like something positive instead of something scary.

He’d gotten past the scariness of it all by reminding himself that this was where the most interesting work in the Forensic Wing occurred. Where real science got done.

He’d initially signed on to the DNA testing unit right out of university, with a newly minted degree in biological sciences. Because he’d been granted admission under the Alliance Poverty Program, he had to spend at least five years working off the cost of his degrees within the Alliance government.

He’d almost decided to move into the private sector when this opportunity had come along. The salary was double what he made in the regular DNA testing section of the Forensic Wing, and he got to do actual work, rather than monitor the machines that did the testing almost automatically.

He once told one of his colleagues that he hadn’t gotten a degree to babysit computer programs and make sure they ran right. Nor had he gotten one so that he could testify in court, verifying the computer’s results.

He had gotten the degree so that he could learn the secrets of DNA, secrets that—after thousands of years of study—human beings still didn’t entirely know.

Stott worried about working for corporations. He believed they often acted in amoral ways, particularly when it came to their employees. He knew too many people who had become actual sacrifices for the corporations: sent into newly aligned alien territories, forced to work in uncharted conditions, and then punished for violating alien laws that no human had known about.

He shuddered and made himself focus on Muñoz. She was holding a tablet close to her chest. Apparently, the tablet was part of the security system.

Her dark eyes met his. “Are you changing your mind, Mr. Stott?”

He straightened. Double the salary. He didn’t have to work with aliens. And he got to do real science. Surely several daily showers and lots of security procedures was worth all of that.

“No,” he said, then decided his voice sounded wobbly. So he made himself speak more firmly. “No. I want to work here.”

“Good,” she said. “Because once you go through those doors, you’re not going to be able to change your mind about this assignment.”

He nodded. He had heard that warning before. It had been part of the application process at every single step. This was an irrevocable assignment, particularly because he would learn things that would be dangerous in the wrong hands.

THE INTERIOR OF the Special DNA Collections Unit was even less impressive than the corridors leading to it. Getting through the fifteen layers of security at the main door had taken ten minutes. Then the showers, which were even more hideous than Stott had expected, followed by the debacle of the environmental suit.

He was actually timed on how long it took him to put on the suit. Anything over thirty seconds meant that he had to go through the damn showers again. He had missed the first time by nearly a minute, the second time by five seconds. He made it the third time, but by then, his skin was red—and it stung.

He was definitely going to look for information on the enhancements.

The environmental suit was a thin version of the one used in the most hostile environments known to humans. The staff had to have freedom of movement—hence the thinness—but they also could not contaminate their environment in any way. So the suit clung to every part of him, and it ran a continual diagnostic. If there was even the slightest breach—something that wouldn’t even kill him in one of those hostile environments—he would have to go back to the clean rooms, scrub down again, and switch suits.

No one had warned him about any of this, and now it was too late to change his mind.

Chase (ChronoShift Trilogy) by Mason, Zack
Well of Shiuan by C. J. Cherryh
Highland Jewel (Highland Brides) by Greiman, Lois
Under His Spell by Natasha Logan
Stranger in Right Field by Matt Christopher, Bert Dodson
Echoes in the Wind by Jupe, Debra
Sidney Sheldon's Reckless by Sidney Sheldon
Rain and Revelation by Pautz, Therese
Beneath the Hallowed Hill by Theresa Crater
Dancing on the Head of a Pin by Thomas E. Sniegoski