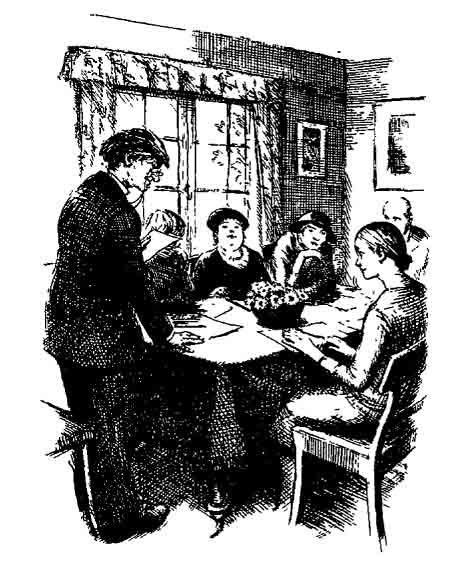 To Anthea and Mac
with love

Part One
The Rumours Fly
1 Forebodings

IT is an undisputed fact that people who choose to live in the country must expect to be caught up, willy-nilly, in the cycle of the seasons.

Spring-cleaning is done to the accompaniment of the rattle of tractors as they drill up and down the bare fields outside. Lambs bleat, cuckoos cry, blackbirds scold inquisitive cats, while upstairs the sufferers from spring influenza call hoarsely for cold drinks.

Summer brings its own background of sights and sounds and the pace of village life quickens as fetes follow cricket matches, and outings, tennis parties and picnics crowd the calendar.

There is not quite so much junketing in the autumn, for harvest takes pride of place, and both men and women are busy storing and preserving, filling the barns and the pantry shelves.

It is almost a relief to get to winter, to put away the lawn mower, to burn the garden rubbish, and to watch the ploughs at work turning the bright corn stubble into dark chocolate ribs ready for winter planting, while the rooks and peewits flutter behind, sometimes joined by sea-gulls when the weather is cruel elsewhere.

For each of us in the country our own particular pattern of life forms but a small part against the general background of the seasons. If you are a schoolmistress, as I am, then the three terms echo in miniature the rural world outside. The Christmas term brings the arrival of new children to the school, harvest festival and, of course, the excitement of Christmas itself.

The Spring term is usually the coldest and the most germ-ridden, but catkins and primroses bring hope of better times, and summer itself is the crown of the year.

It is good to have this recurring rhythm, this familiar shape of the year. We knowâto some extentâ what to expect, what to welcome, what to avoid.

But there is another aspect of country life which is not so steady. There are certain topics which crop up again and again. Not, to be sure, as rhythmically as primroses and harvest, but often enough over the years to give us a little jolt of recognition. There is the matter of the village hall, for instance. Is it needed or not needed? And then there is the parlous state of the church organ and its eternal fund. And Mrs So-and-so is expecting again for the twelfthâor is it the thirteenth?-time, and something must be done about her house, or her husband, or both.

It is rather like watching a roundabout at a Fair. The galloping horses whirl by, nostrils flaring, tails streaming, and then suddenly there is an ostrich, strange and exotic in its plumage among the everyday beasts. The merry-go-round twirls onward and we begin to sink back again into our pleasant lethargy when, yet again, the ostrich appears and our interest is quickened once more. So it is with these topics which disappear for a time whilst we are engrossed with everyday living, and then reappear to become the chief matters of importance, our talking points, things which have
startled us from our normal apathy and quickened our senses.

Just such a recurring topic is the possible closure of Fairacre School. I have been headmistress here for a number of years, and talk of closing it has cropped up time and time again, diverting attention from the Church Organ Fund and the Village Hall as surely as the ostrich does from the horses. Naturally, after a week or two, the excitement dies down, and we continue as before with feelings of relief, until the next crisis arrives.

The cause varies. The true difficulty is that our numbers at the school scarcely warrant two teachers. One-teacher schools are considered undesirable, rightly, I think, and have been closing steadily in this area. Every now and again, the word goes round that Fairacre School really only needs one and a half teachers, and this half-teacher problem cannot be overcome, although one has the pleasing fancy that a great deal of ruler-gnawing in county offices goes on while the matter is being given consideration.

Usually, Providence steps in. A new family of six children appears, and is joyously added to the register. Cross parents refuse to send their young children by bus to the next village, or some other benign agency gets to work, and the matter of Fairacre School's closure is shelved once more.

I had become so used to the ostrich appearing, that I confess I could scarcely distinguish him from the galloping horses.

Until one evening, when Mr Annett, the headmaster of neighbouring Beech Green School, startled me with his disclosures.

As well as being a headmaster, George Annett is choirmaster and organist of St Patrick's, Fairacre. On Friday evenings he drives over from Beech Green, a distance of some three miles, to officiate at choir practice.

For a small village we have quite a flourishing choir. Two of the stalwarts are Mr Willet, part-time caretaker of the school, sexton, grave-digger and general handyman to the whole village, and Mrs Pringle, our lugubrious school cleaner, whose booming contralto has been heard for longâfar too long, according to the ribald young choristersâresounding among the rafters of St Patrick's roof.

On this particular Friday, George Annett called at the school house where I was busy putting away the week's groceries and trying to recover from the stunning amount I appeared to owe for about ten everyday items.

'Have a drink,' I said. 'I reckon I need a brandy when I see the price of butter this week.'

'A spot of sherry would be fine,' said George. 'Not too much. Can't arrive at church smelling of alcohol, or Mrs P. will have something to say.'

'Mrs Pringle,' I told him, with feeling, 'always has something to say. And usually something unpleasant. That woman positively invites assault and battery.'

'Heard the latest? Rumour has it that my school is being enlarged.'

'I've heard that before. And Fairacre's closing, I suppose?'

George studied his sherry, ignoring my flippancy. His grave face sobered me.

'It rather looks like it. The chap from the office is coming out next week to see me. Don't know why yet, but this rumour has reached me from several sources, and I believe something's in the wind. How many children do you have at the moment?'

'We're down to twenty-eight. Pat Smith has fifteen infants. I have the rest. Incidentally, she's going at the end of term, so we're in the throes of getting a new appointment.'

'No. I expect we'll have to make do with a number of supply teachers, until next term when the girls are appointed from college.'

George Annett put down his glass and rose to his feet.

'Well, I'll let you know more when I've seen Davis next week. I can't say I want a bigger school. We'll have the upheaval of new building going on, and a lot of disgruntled parents who don't want their children moved away.'

'Not to mention disgruntled out-of-work teachers.'

'You won't be out-of-work for long,' he smiled. 'Perhaps you'll be drafted to Beech Green?'

'And where should I live? No doubt the school and the school house would be sold together pretty quickly, and I certainly can't afford to buy either. I'm going to need a sub from the needlework tin, as it is, to pay for this week's groceries!'

I might have ignored this rumour, as I had so many others, if it had not been for Mrs Pringle.

She arrived at the school house on Saturday morning with a nice plump chicken, of her own rearing, in the black oilcloth bag which accompanies her everywhere.

'Have a cup of coffee with me,' I invited.

'I don't mind if I do,' replied Mrs Pringle graciously.

I recalled a forthright friend who used to reply to this lack-lustre acceptance by saying:

'And I don't mind if you don't!' But, naturally, I was too cowardly to copy her.

I took the tray into the garden, Mrs Pringle following with the biscuit tin. Spring at Fairacre is pure bliss and I gazed fondly at the almond blossom, the daffodils and the pink haze of a copper beech in tiny leaf.

'I see you've got plenty of bindweed in your border,' said Mrs Pringle, bringing me back to earth with a jolt. 'And twitch. No need to have twitch if you weeds regular.'

It sounded like some nervous complaint brought on by self-indulgenceâa by-product of alcoholism, perhaps, or drug addiction. However, the sun was warm, the coffee fragrant, and I did not intend to let Mrs Pringle deflect me from their enjoyment.

'Have a biscuit,' I suggested, pushing the tin towards her. She selected a chocolate bourbon and surveyed it with disapproval.

'I used to be very partial to these until they doubled in price pretty nearly. Now I buy Osborne. Just as nourishing, and don't fatten you so much. At least, so Doctor Martin said when he give me my diet sheet.'

'Yes. I'm to lose three stone. No starch, no sugar, no fat, and no alcoholâthough the last's no hardship, considering I signed the pledge as a child.'

'Then should you be eating that biscuit, and drinking coffee with cream in it?'

'You've heard about our school shutting, I suppose?' said the lady, her diction somewhat blurred with biscuit crumbs. 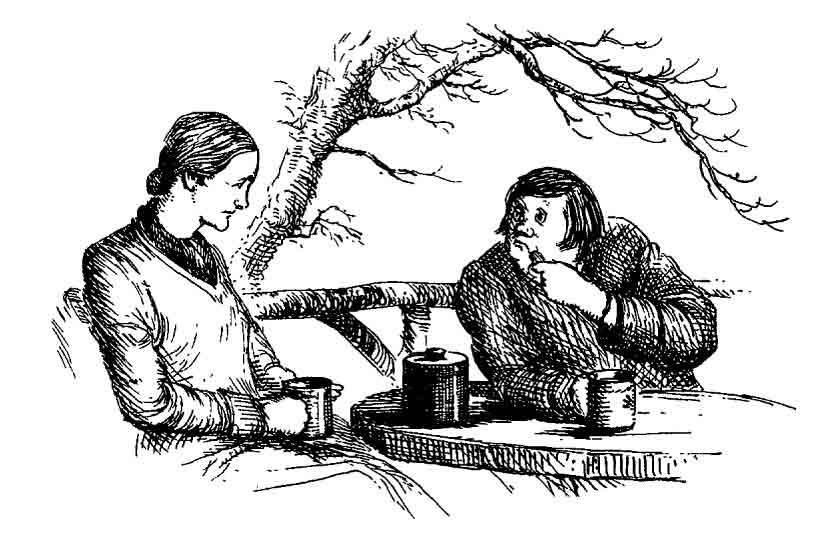 'No, the latest. My cousin at Beech Green says they're going to build on to Mr Annett's school, and send our lot over there in a bus. Won't suit some of 'em.'

A vague feeling of disquiet ran through me. Mrs Pringle was so often right. I remembered other dark warnings, airily dismissed by me, which had been proved correct, as time went by.

Mrs Pringle dusted some crumbs from her massive chest.

'Some seems to think the infants will stay here,' she went on, 'but I said to Floraeâthat's my cousin at Beech Green, and a flighty one she used to be as a girl, but has steadied down wonderful now she's got eight childrenâI said to her, as straight as I'm saying to you now, Miss Read, what call would the Office have to keep open all that great school for a handful of fives to sevens? "Don't make sense," I said, and I repeat it now: "It just don't make sense."'

Hollowland by Amanda Hocking
Sons of Taranis by S J A Turney
Aquarium by David Vann
Mystery in the Mall by Gertrude Chandler Warner
Hide and Seek by Larrinaga, Caryn
The Last Pilot: A Novel by Benjamin Johncock
A Scandalous Proposal by Kasey Michaels
Someone Someday (All in Good Time Book 2) by St. James, Brooke
The Big Steal by Emyl Jenkins
The World as We Know It by Krusie, Curtis