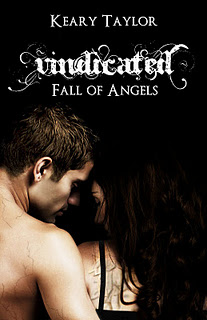 Except as permitted under the U.S. Copyright act of 1976, no part of this publication may be reproduced, distributed, or transmitted in any form or by any means, or stored in a database or retrieval system, without the prior written permission of the author.

Summary: Time is ticking for Alex and Jessica must find a way to save him before he’s pulled back into the world of the dead.

But saving Alex will require asking help from Cole and returning to the place Alex saved her from.

The world fell still as I watched the feather drop to the deck.

It spun in a perfect circle just once before landing on the wooden surface.

There should be nothing in this world more innocent looking than a feather.

But in that single feather I remembered everything that was wrong with my life.

There were so many panic-filled, sleepless nights.

Endless nightmares that plagued me every time I slept.

The dark eyes that bore into mine before I was branded.

Realizing who Cole Emerson truly was and what he wanted from me.

The snapping sound of Alex’s neck giving under Cole’s hand and the way Alex’s dead body cooled in my arms.

I remembered looking into Cole’s cold black eyes, framed with swollen black veins, before he returned to the afterlife.

And knowing the same thing was going to happen to Alex.

And I remembered the first time I had shown Alex my scars, the way he leaned in and pressed his lips to my brand.

There was the first time he told me he loved me.

There were so many nights in my bed, my body wrapped up against his.

Every touch, every kiss, every
I love you
flashed through my head.

All the things that were right in my world and everything that was wrong with it was summed up in that single feather as it settled on the deck.

In the world of angels, nothing is ever simple.

But the feeling inside of me was simple, it was real.

My love for the man on one knee in front of me was real.

This moment was real.

The sun created a glow around Alex’s body as it continued to rise, barely breaking over the tree tops.

He was radiant, perfect in every sense of the word.

The smile that spread on Alex’s face made one break on my own as he stood, reaching into his pocket.

My eyes fixed on the small black box he pulled out, its surface covered in lint, large patches of the velvet completely rubbed off.

He lightly took my hand in his, his eyes watching my face the whole time.

He paused for just a moment, an endless flood of memories washing through his eyes.

All the hurt and all the joy we had experienced together was there.

Alex’s eyes seemed to glow though as a small smile spread on his lips again and he slid the ring I had been waiting the last six months for onto my finger.

“We may not have forever,” Alex said as I looked up into his face.

“But we’ve got to make this enough to last forever.”

I bit my lower lip as I pressed my forehead to his, closing my eyes and breathing his scent in.

Even through my eyelids, the entire world seemed to glow, just like everything inside of me was.

“You know I love you,” he said quietly.

I felt it before I saw it, the smile that cracked on Alex’s face.

“I can’t wait to hear you say those two words in a white dress.”

I couldn’t help but let a small laugh escape my lips.

“I’ve imagined it about a thousand times.”

As I opened my eyes to look at him, Alex’s face grew more serious.

“I hope you know that I’ve wanted this for…
so
long,” he said, his voice full of longing and a hint of pain.

“I know you have,” I breathed, squeezing his hand in mine.

“It just wasn’t the right time until now.”

Alex’s hand came to my cheek, his grey eyes burning into mine.

“Thank you for understanding.

I know nothing about these past few months has been easy for you.”

“You appreciate something more when it was hard to get,” I said with a small smile.

“Who said that?” Alex asked, a playful grin on his own now.

I chuckled and shrugged my shoulders as Alex’s hand dropped from my face.

may have just made it up.”

“How about some breakfast?”

“French toast it is then,” Alex said as he pressed a kiss to my forehead and headed back inside.

I watched him as he walked back into the house, the sunlight reflecting blindingly off the metallic surface of Alex’s wings.

As soon as he was out of view, I nudged the feather that had fallen from his wings toward the edge of the deck.

Not realizing I was holding my breath, I pushed it over the edge, watching as the breeze picked it up and carried it out over the surface of the lake.

I saw it land in the water, the luminosity of it becoming saturated and dulled by the water.

With a hard swallow, I turned my back to it and walked inside.

This was the first of how many lost feathers?

Amber staggered out of her room, her eyes squinted and her hair in a wild mess around her face.

“Whatcha’ making?” she asked with a croak.

“Your favorite,” Alex answered as he started cracking eggs into a dish.

“See, this is why I put up with all your crazy angel crap,” she said as she tried to run a hand through her tangled hair, and settled on a barstool.

Alex just chuckled as he pulled the milk out of the fridge.

“Why don’t you see if Caroline is awake yet, Jessica?”

“Sure,” I said as I headed toward the stairs.

I hoped he couldn’t hear the way my heart quickened.

There was something about Caroline that terrified me.

I knocked on the door to Alex’s old bedroom and listened for a reply.

From within I faintly heard a stifled cry and what sounded like scratching.

When I didn’t hear an answer, I pushed the door open.

She sat on what was my old double sized bed, rocking back and forth, a picture sitting in her lap.

Tears slowly made their way down her scarred face.

She was scratching at the skin on her left arm so furiously there was blood under her fingernails and more dripping down her arm.

“Caroline!” I said as I jumped across the room.

I pulled her hand away from her bleeding arm, kneeling next to the bed.

“Caroline, look at what you’re doing.”

She barely even glanced down at her arm before she looked back at the picture.

She gave a sad sigh.

A small smile spread on my lips as I looked down at the photo.

It was a picture of Alex holding a basketball, wearing a red uniform and a huge grin.

He was probably about sixteen.

“It was better that I wasn’t in his life,” her scratchy voice came out.

He wouldn’t have turned out that way if I’d been around.”

“Maybe you wouldn’t have turned out this way if you’d been around,” I said as I continued to look at the picture.

Caroline chuckled as she looked up at me, her yellowed and dull looking eyes settling on mine.

You fight for what you want.”

Cole’s words echoed through my head.

What are you willing to do to save him?

As I ushered Caroline up the stairs I knew the answer to that question.

“Are you alright, Caroline?” Alex asked in alarm.

I opened the coat closet and pulled the first-aid kit down from the top shelf.

“It’s nothing,” she said as she shook her head and sat down at the dining table.

I walked into the kitchen, wetting a few paper towels in the sink.

“How long until they notice?” Alex asked with a sly grin as he leaned into my side, his eyes glancing at the heavy ring on my finger.

I just smiled and walked over to the table without answering his question.

Sliding a chair right next to her, I set to cleaning Caroline’s arm off.

“Whoa, there,” she suddenly said, grabbing my wrist.

“Apparently ten seconds,” I said to Alex with a chuckle.

He laughed too as he flipped more of the French toast.

At the same time the front door opened and in walked Rod.

“That’s quite the rock,” Caroline said, a slightly gross looking smile creeping on her cracked lips as she met my eyes.

“What?” both Amber and Rod said at the same time.

“He did it?” Amber asked, her voice hitching in excitement and awakness.

“Finally,” Rod said as he rolled his eyes, a smile spreading on his face.

Alex walked to my side, wrapping an arm around my waist.

“
Way
too long,” I teased as I pressed a kiss to his cheek.

“When did this happen?” Amber asked as she bounded over, jerking my hand toward her.

“Why haven’t you told me yet?”