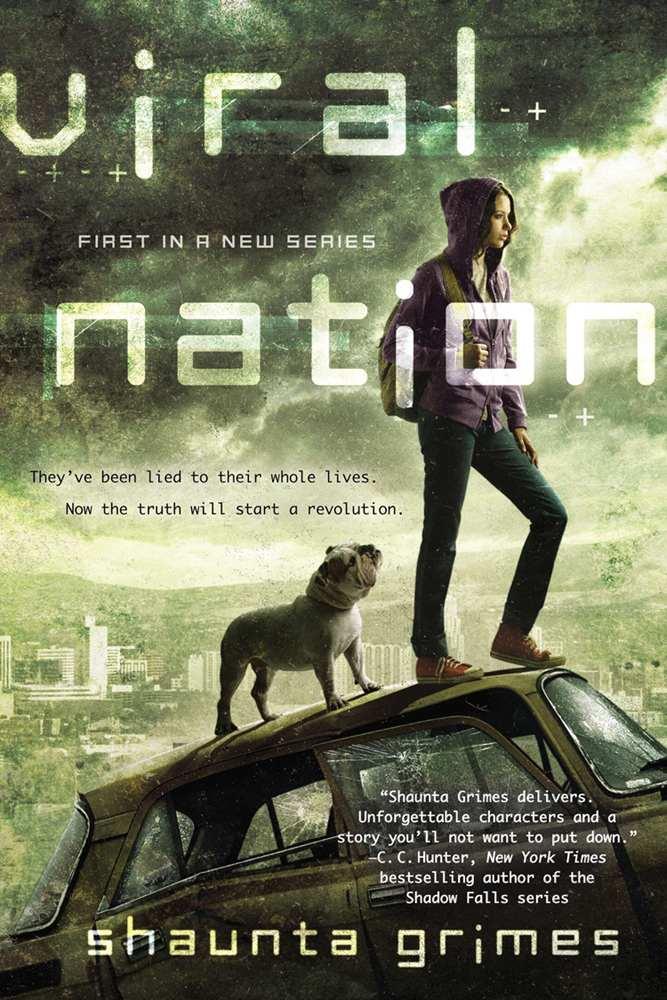 writing on the wall

She knew what she was looking at as soon as she saw it. She closed her eyes and wished it away, but when she opened them again, she still held a dispatch flyer with West’s face on it.

Was it a joke? Some kind of elaborate, awful prank? The picture of West was current; it looked like it had been taken from above as he was leaving the Bazaar.

Subject is wanted for the murder of Bridget Hannah Kingston.

Murder? The absurdity of it made her wonder again if this was some kind of prank. The idea that West would kill the headmaster’s daughter was so impossible, she couldn’t imagine it.

Until it struck her that of course he wouldn’t kill her or anyone else. The report of Bridget’s death would show up in the databases before it happened. A dispatch flyer would be distributed—this dispatch flyer—and stop the crime before it was committed.

They’d stop it by putting her brother in front of a firing squad. Not their father’s squad, of course; that would be too cruel. But West would be executed.

Copyright © 2013 by Shaunta Grimes.
All rights reserved. No part of this book may be reproduced, scanned, or distributed in any printed or
electronic form without permission. Please do not participate in or encourage piracy of copyrighted
materials in violation of the author’s rights. Purchase only authorized editions.

This is a work of fiction. Names, characters, places, and incidents either are the product
of the author’s imagination or are used fictitiously, and any resemblance to actual persons,
living or dead, business establishments, events, or locales is entirely coincidental.
The publisher does not have any control over and does not assume any responsibility for
author or third-party websites or their content.

I do not look upon these United States as a finished product. We are still in the making.

“Keep her away from me.”

James walked toward his wife with their newborn daughter sleeping against his chest, her body a warm spot through a shirt he hadn’t changed in three days. “You don’t mean that, Janie.”

“I don’t want her near me.” Jane’s features were swollen almost beyond recognition. Sores, seeping and open, covered skin that had been a source of vanity—more his than hers—only a week ago. Talking caused the corners of her mouth to crack.

His own skin ached to the muscle in sympathy with hers. Like they shared the same body. And he was so angry. So goddamned
bent
.

They were supposed to be safe here, in the mountains where the fleas that carried the virus couldn’t live. The president had told them so.

Told the whole country, so that desperate and already sick people stampeded to higher elevations. Nothing could hold them back. They came like a revival of the Gold Rush, blinded by the need to move westward and upward into the Sierras.

“Hold her, Jane. It’s too…”
Late anyway.
He couldn’t bring himself to say it. He wished to God it weren’t true.

His wife had brought the virus home from the hospital along with their new baby. Clover, they’d named her. Jane said it was a good name for a baby born in spring.

It was nothing more than bad luck that the virus came to the hospital at the same time their Clover did, but Jane blamed herself all the same.

She’d rear-ended a pickup truck on the way to the supermarket. Her water broke and Clover was born two weeks early. If the baby had come on time, in the first part of May instead of middle April, they would have known better than to go to the hospital.

Ten days ago the virus was something that happened somewhere else. Obscene but distant, like reading in the
Reno Gazette-Journal
about a hurricane in Florida or a tornado in Kansas. Closer than an earthquake in Haiti, but still not their worry.

Not something that could touch them beyond a general grief for the suffering of fellow human beings and an uptick in gasoline or food costs.

Now it was everywhere. It was in their living room, on the narrow bed he’d moved down from their son’s room for Jane when she couldn’t climb the stairs anymore.

Their son West, only three years old, was already feverish, his lymph nodes swollen and hot. It would come for Clover next. And James, too. Maybe even tonight.

Except Jane’s body had filled Clover’s with immunities that could keep her healthy longer than him.

The thought that he might die before Clover did made it difficult for James to breathe. It made him want to do something reckless and unthinkable. He had to be healthy enough to care for his baby or she’d be left to die alone.

He wouldn’t let that happen.

Jane moaned, low in her throat. Her skin decomposed, even as he watched.

His wife didn’t deserve this shredding of her body while her mind refused to blunt. She’d find no relief, not even in dementia, until she was dead.

For the first time since they were seventeen, there was nothing he could do to protect her.

The world had collapsed around them while they told each other everything would be okay. The virus was only the icing on a cake with layers of energy crisis, climate change, recession, xenophobia, and a short but vicious civil war between the midwestern and southwestern states over the need for illegal migrant workers on the farms and the desire to keep them out of the border states.

The media called that cake the Bad Times.

Until Jane got sick—was it just three days ago? Yes, just three days ago, when the air wasn’t thick with the scent of her dying flesh. Until the first sores came, James, like everyone he knew, assumed that a return to good times was coming.

But it was. Jane would die tonight, if there was any mercy left in the universe. His boy had maybe two days. By morning, West would be wracked with pain, just like his mother. Within a week, it would be over for all four of them, one way or another.

James kissed the top of Clover’s head, felt her feathery dark wisps of hair against his lips. She smelled new, when the rest of the house stank of a B-grade slasher movie.

Her eyes, wildly green in her ravaged face, filled with tears. “I’m so sorry.”

“Not your fault, baby. It’s not your fault.” He laid Clover against Jane’s body. His wife was too weak to fight, so she wrapped
a fragile arm around the tiny bundle and curled protectively against the baby, like an oyster around a pearl.

How could Jane have lost so much weight so quickly? Under a worn nightgown, her rib bones felt like splintery artifacts against the back of his hand.

The doctor who’d told them that Jane had the virus wore a full-body hazmat suit and something that looked like a cross between an astronaut’s helmet and the gas mask James had been issued in Iraq before West was born. She sent them home from the clinic with what she called a “pain kit.”