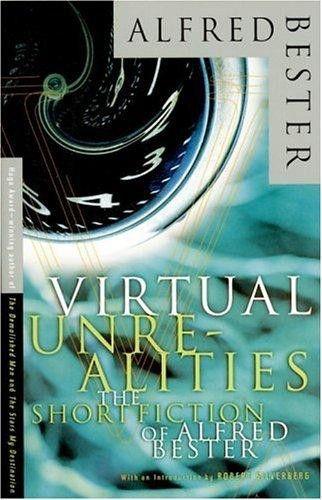 Alfred Bester was born in New York in 1913. After attending the University of Pennsylvania, he sold several short stories to
Thrilling Wonder Stories
in the early 1940s. He then embarked on a career as a scripter for comics, radio, and television, where he worked on such classic characters as Superman, Batman, Nick Carter, Charlie Chan, Tom Corbett, and the Shadow. In the 1950s, he returned to prose, publishing several short stories and two brilliant, seminal novels,
The Demolished Man
(which was the first winner of the Hugo Award for Best Novel) and
The Stars My Destination
. In the late 1950s, he wrote travel articles for
Holiday
magazine, and eventually became their Senior Literary Editor, keeping the position until the magazine folded in the 1970s. In 1974, he once again came back to writing science fiction with the novels
The Computer Connection, Golem
100
, and
The Deceivers
, and numerous short stories. After being a New Yorker all his life, he died in Pennsylvania in 1987, but not before he was honored by the Science Fiction & Fantasy Writers of America with a Grandmaster Award.

The Stars My Destination

The Short Fiction of Alfred Bester

“And 3 ½ to Go” and “The Devil Without Glasses” copyright © 1997 by the Estate of Alfred Bester, Joe Suder, and Kirby McCauley

Compilation copyright © 1997 by the Estate of Alfred Bester, Joe Suder, and Kibby McCauley

All rights reserved under International and Pan-American Copyright Conventions.

Constitutes an extension
of this copyright page.

Of Time and Third Avenue

Time Is the Traitor

The Men Who Murdered Mohammed

Adam and No Eve

The Devil Without Glasses (
previously unpublished
)

A
lfred Bester was a winner right from the start—quite literally. His very first story (“The Broken Axiom,”
Thrilling Wonder Stories
, April 1939) carried off that month’s $50 prize in the Amateur Story Contest that
Thrilling Wonder
was then running every issue to attract new talent. He was twenty-five years old, a graduate of the University of Pennsylvania (where he majored, he liked to say, “in music, physiology, art, and psychology”), and was working at the time as a public relations man while pondering the challenges of a career as a writer.

“The Broken Axiom” isn’t a marvelous story, which is one of several reasons why it hasn’t been included in this collection. It is, in fact, a creaky and pretty silly item full of pseudoscientific gobbledygook and cardboard characters, which Bester himself spoke of later as “rotten.” But silly gobbledygooky stories were something that the garishly pulpy old
Thrilling Wonder Stories
published by the dozens in those days, and this initial contribution by the novice Bester was well up there in professionalism with the rest of that issue’s copy, all of which was the work of veteran pros.

And observe, if you will, the magnificent cockeyed pizazz and breathtaking narrative thrust with which Bester gets his first story in motion, back there nearly sixty years ago:

It was a fairly simple apparatus, considering what it could do. A Coolidge tube modified to my own use, a large Radley force-magnet, an atomic pick-up, and an operating table. This, the duplicate set on the other side of the room, plus a vacuum tube some ten feet long by three inches in diameter, were all that I needed.

Graham was rather dumfounded when I showed it to him. He stared at the twin mechanism and the silvered tube swung overhead and then turned and looked blankly at me.

“Yes,” I smiled. “It’s about as simple as the incandescent electric lamp, and I think as amazing.”

And with that he was off and running on a literary career that was a lot less simple than the incandescent electric lamp, and just about as amazing.

For the next forty-odd years, this dynamic and formidably charismatic man blazed a bewildering zigzag trail across the world of science fiction. But that was only a part-time amusement for him; he also wrote plays, the libretto for an opera, radio scripts, comic-book continuity, television scripts, travel essays, and a million other things. Every now and then the desire to write science fiction came over him, though, like a sort of fit, and he let it have its way. And thus he gave us two of the most astonishing science fiction novels ever written (
The Demolished Man
and
The Stars My Destination
) and, intermittently over the decades, a couple of dozen flamboyant and extraordinary short stories, stories that are like none ever written by anyone else, stories that leave the reader dizzy with amazement.

When Bester was at the top of his form, he was utterly inimitable; when he missed his mark, he usually missed it by five or six parsecs. But he was always flabbergasting. This is how the critic Damon Knight put it in a 1957 essay:

Dazzlement and enchantment are Bester’s methods. His stories never stand still a moment; they’re forever tilting into motion, veering, doubling back, firing off rockets to distract you. The repetition of the key phrase in “Fondly Fahrenheit,” the endless reappearances of Mr. Aquila in “The Star-comber” are offered mockingly: try to grab at them for stability, and you find they mean something new each time. Bester’s science is all wrong, his characters are not characters but funny hats; but you never notice: he fires off a smoke-bomb, climbs a ladder, leaps from a trapeze, plays three bars of “God Save the King,” swallows a sword and dives into three inches of water. Good heavens, what more do you want?

Even those “rotten” early stories of Bester’s display the restless fizz of imagination that is his hallmark. Most of them really are stinkers, objects casually assembled out of handy spare parts to meet the modest needs of the prewar penny-a-word pulp magazine market. Though there are flashes of pure Besterian magic in every one of them, all but a few stick close to the conventional fiction formulas of the era. But “Adam and No Eve” (
Astounding Science Fiction
, September 1941) was good enough to get into
Adventures in Time and Space
, the first of the classic science fiction anthologies, and it still has a great deal to say to today’s readers. And the wild and frantic fantasy novella “Hell is Forever” (
Unknown Worlds
, August 1942) unleashes the manic power of Bester’s prose in a way that gives a clear clue to the passionate risk taking and experimentation that marks the fiction of his full maturity.

After that first burst of science fiction, though, he took an eight-year hiatus, during which he wrote reams of comic strip continuity—for
Superman, Captain Marvel, The Green Lantern
, many others, and scripts for such radio shows as
Nero Wolfe, Charlie Chan
, and
The Shadow
. When television arrived on the scene after the war, Bester tried his hand at that too, but it was an unhappy experience in which his volcanic drive toward originality of expression put him into violent collision with the powerful commercial forces ruling the new medium. In 1950—36 years old, and entering into his literary maturity—he found himself looking once more toward science fiction.

There had been great changes in the science fiction field during Bester’s eight-year absence, and no need now existed for him to conform to the hackneyed pulp magazine conventions. Before the war, there had been only one editor willing to publish science fiction aimed at intelligent and sophisticated readers—John W. Campbell, the editor of
Astounding Science Fiction
and its fantasy-fiction companion,
Unknown Worlds
. In Campbell’s two magazines such first-rank science fiction writers as Robert A. Heinlein, Isaac Asimov, Theodore Sturgeon, L. Sprague de Camp, and A. E. van Vogt found their natural home. The seven or eight other magazines relied primarily on juvenile tales of fast-paced adventure featuring heroic space captains, villainous space pirates, mad scientists, and glamorous lady journalists.

But that kind of crude action fiction had largely gone out of fashion by 1950, and most of the old science fiction pulps had either folded or upgraded their product. Campbell’s adult and thoughtful
Astounding
was still in business, though—(
Unknown Worlds
had vanished during the war, a victim of paper shortages)—and it had been joined by two ambitious newcomers,
Fantasy and Science Fiction
, edited by the erudite, witty Anthony Boucher, and
Galaxy
, whose editor was the gifted and ferociously competitive Horace Gold.

Bester began his return to science fiction with a story for Campbell—“Oddy and Id,” which Campbell published under the title of “The Devil’s Invention” in
Astounding
for August 1950. But the postwar Campbell had become obsessed with Dianetics, a technique of psychotherapy invented by science fiction writer L. Ron Hubbard that Bester regarded as quackery—and Bester found the changed atmosphere around the great editor too uncongenial for comfort. He turned instead to the new magazines of Boucher and Gold, and never wrote for
Astounding
again.

His stories for those magazines, infrequent though they were, had an immediate and explosive effect that moved him swiftly to the forefront of the field. The first was the whimsical little “Of Time and Third Avenue” (
Fantasy and Science Fiction
, October 1951). Then came the remarkable novel
The Demolished Man
, which
Galaxy
serialized in its issues for January, February, and March of 1952. Science fiction had never seen anything remotely like it—a stunningly intricate futuristic detective story coupled with startling applications of elements of Freudian theory and told in a manner rich with Joycean linguistic inventiveness. The book made an overwhelming impact—in 1953 it received the very first Hugo award as best science fiction novel of the year—and has been regarded as a classic ever since.