Read Voices of the Dead Online

Voices of the Dead 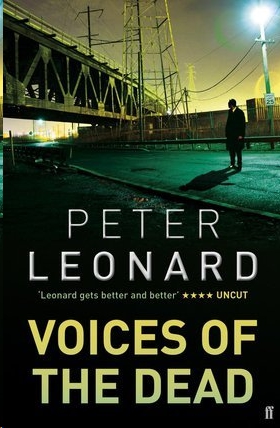 This is a work of fiction. Names, characters, places, and incidents either are the product of the author’s imagination or are used fictitiously. Any resemblance to actual events, locales, organizations, or persons living or dead, is entirely coincidental and beyond the intent of either the author or the publisher.

All rights reserved, which includes the right to reproduce this book or portions thereof in any form whatsoever, except as provided by US Copyright Law.

For information, address The Story Plant.

Printed in The United States of America

I want to thank my publishers, Lou Aronica and Peter Miller, my agent, Jeff Posternak at Wylie, New York, and my editors, Angus Cargill and Katherine Armstrong at Faber, UK.

I couldn’t have written the book without the help of the librarians at the Holocaust Memorial Center in Farmington Hills, Michigan.

An important difference between Peter’s books and mine, he writes his prose on a computer while I put down the words with a ballpoint pen. That’s all right. David Mamet said, “I think there are people who are sufficiently driven that even a computer is not going to stop them from writing well.”

And Pete is sufficiently driven.

After twenty-five years running a successful advertising agency—all while reading hundreds of popular novels and making judgments about their worth—Peter has attacked the world of fiction with a vengeance, writing five novels in the past five years and his publisher is after him to write another, a sequel to
Voices of the Dead
.

The key to writing successful books is developing the right voice to tell the stories, one that’s natural to the writer and flows without strain or too many words and uses the voices of the people in the book, their attitudes, showing rather than telling who they are. Peter read a lot of Ernest Hemingway and John Steinbeck—not so much the popular names on the
Times
list—none of the authors who have a co-writer on the cover along with theirs, though much smaller. It causes you to wonder who actually wrote the book. Peter has read my Ten Rules of Writing and it shows; he always leaves out the parts readers tend to skip.

I remember him giving me the manuscript of his first novel
Quiver
with some hesitation, expecting me to begin marking up the pages to underscore awkward sentences, tired expressions. But right from the start I liked
Quiver
and Peter’s dead-on style; no long-winded parts of it over-written, no show-off descriptions that say, “Hey, look at my writing.” I think my only suggestion was to move a key scene to a place where it would get more attention. Reading his work since, I haven’t done much more than circle typos.

The story takes place in 1971. Ernst Hess, a diplomat visiting the German Embassy in Washington, is still a dedicated Nazi 25 years after the war, loving the time he was an SS officer in charge of a killing squad; and he’s still at it, looking for Jews he might have missed.

In the other corner is Harry Levin, who escaped from a Nazi death camp when he was a boy. Now Harry’s a scrap-metal dealer in Detroit who goes one on one with the cunning Nazi.

Read the first chapter and you won’t sell this scrap dealer short.

11:30 in the morning, Harry Levin was on Orleans Street, cutting through Eastern Market on his way back to the scrap yard. He’d just withdrawn fifty thousand dollars from the National Bank of Detroit. Now he was driving past turn-of-the-century brick buildings, seeing signs for Embassy Foods, and F&S Packing, another one for Market Seafood, brick bleeding through faded blue paint. There were delivery trucks parallel parked on the street, and Hi-Los carrying pallets of food, zigzagging through the loading areas of wholesale food emporiums.

The sun had risen over the buildings and he could feel its warmth through the open windows of the Mercedes. It was a perfect blue-sky day, one of about fifteen a year you got living in the Motor City. The Chevy Nova in front of him was slowing down and Harry hit his brakes. Beyond the Nova, a semi with a forty-foot trailer, a heavy‚ was blocking the road, trying to back down a narrow street to a loading dock, blue cab at a severe angle, looking like it had jackknifed. But it kept moving, the driver angling for position.

Harry sat against the leather seat and waited, sitting there awhile, getting impatient, had a meeting at his office in twenty minutes. He glanced in the rearview mirror and saw a black guy approaching the car from behind, watching his cool economical strut, man wearing white bellbottoms and a maroon shirt with collar points that reached his shoulders.

He looked straight ahead, saw the semi backing down the alley almost out of view when an arm came through the side window to his left, holding a carving knife with a long blade under his jaw, pressing it against his neck.

“Stay where you at, motherfucker,” the black guy said.

His eyes were bloodshot. He had a sparse mustache and a scraggly goatee and a high Afro with a putty-colored comb stuck in it at an odd angle. Man was a junkie and Harry knew he’d cut his throat without thinking about it. He heard a door open, glanced in the rearview mirror, saw the guy that was coming up behind him getting in the backseat, closing the door. This one was clean-shaven and more alert than the junkie, with shiny hair that looked like it had motor oil on it, combed back.

“Motherfucker, see where I’m at? See what I got, you don’t do what you tole?”

He had a pocketknife with a six-inch blade in his hand, leaned forward, put it against Harry’s jugular, pulling him back against the headrest, Harry smelling aftershave and sweat. Afro’s hand moved out of the window, and he went around the front of the car and got in next to him.

“What in the case?” guy in back said.

“Know what we do? Take your money.” Afro gave him a sleepy-eyed grin. “Like this. Gimme your wallet, motherfucker,” he said, pointing the carving knife at Harry.

Guy in back said, “Let see what else in there you got?”

Harry saw him in the rearview mirror, watched him sit back and put the briefcase in his lap, fooling with the clasp, trying to open it with the tip of his knife blade. Tried for a while, gave up and looked at Harry.

“In my pocket,” Harry said. He reached behind his back, felt the grip of the Colt Python, pulled his wallet out of the back left pocket of his khakis and threw it on the floor mat in front of Afro. Keep him busy.

Afro bent forward, reaching with his long arms, and now Harry drew the Colt, turned in his seat, back against the door as Afro sat up with the wallet, spread it open, looking at $750, grinning till he saw the gun.

“Easy,” Afro said. “Be cool.” He handed Harry his wallet back. “See? It all there. No harm done, nobody lose nothin’.”

Harry turned, two hands on the revolver, aimed at the guy in back, the guy preoccupied, still fooling with the briefcase. Harry pulled the hammer back and now he looked up. “Drop the knives out the window or I’ll blow your head off.” He said it calm and measured. They tossed the blades out and Harry heard them hit the street. “Give me your wallets.”

Afro took his out and put it on the edge of Harry’s seat. Guy in back slid his between the seats on the console.

“Now get the hell out of here.”

They did, and Harry left them standing on Orleans Street, wondering what had just happened. He looked straight, the Nova was halfway down the block, put the Mercedes in gear and took off.

In addition to junkies trying to rob him the IRS was trying to take his money in a more legitimate way. First he’d gotten a letter that said:

As part of our review of tax compliance, the Internal Revenue Service has determined records maintained by S&H Recycling Metals may be insufficient to verify the accuracy of purchases of recyclable materials. It is the responsibility of taxpayers to maintain adequate records to substantiate items on their tax returns, including purchases of recyclable materials. Failure to maintain such records could result in the assessment of additional tax due to the disallowance of deductions. We appreciate your cooperation and willingness to work with us on this matter. If you have any questions, please contact the examiner named at the heading of this letter.

Into the Sea of Stars by William R. Forstchen
Hands of My Father: A Hearing Boy, His Deaf Parents, and the Language of Love by Uhlberg, Myron
Bad Girls Don't Die by Katie Alender
Kiss of Ice (St. James Family) by Parker, Lavender
Reckless Point by Cora Brent
The Scrapbook by Carly Holmes
Shunning Sarah by Julie Kramer
The Stolen Valentine by Emrick, K.J.
GRIT (The Silver Nitrate Series Book 2) by Tiana Laveen
Spirit Legacy by E E Holmes