Voodoo Histories: The Role of the Conspiracy Theory in Shaping Modern History 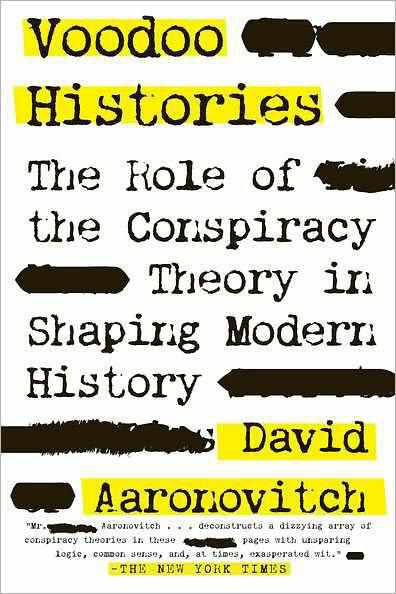 1. “THE UNCANNY NOTE OF PROPHECY”

3. CONSPIRACIES TO THE LEFT All rights reserved. No part of this book may be reproduced, scanned, or distributed in any printed or electronic form without permission. Please do not participate in or encourage piracy of copyrighted materials in violation of the author’s rights. Purchase only authorized editions. Published simultaneously in Canada

Grateful acknowledgment is made for permission to reprint from “Sympathy for the Devil,” words and music by Mick Jagger and Keith Richards. © 1968 (renewed) Abkco Music, Inc., 85 Fifth Avenue, New York, NY 10003. All rights reserved. Used by permission.

For Sarah, Rosa, Lily, Eve, and Ruby. My girls.

T
his book is the fault of a fellow named Kevin Jarvis. Kevin was—is, though I haven’t seen him since February 2002—a tall, youngish man with a wicked grin and a shaved head. We had been sent by the BBC to Tunisia to make a short film for a program on holiday destinations in places that, away from the beaches and tourist sights, abused their citizens. Kevin was the cameraman-producer and I was what used to be called the “lips.”

All the filming had to be done secretly as Kevin and I moved between the mosaics of Carthage and the homes of tortured dissidents; otherwise we would have been arrested and quite possibly roughed up and deported. Several times we caught sight of the ubiquitous Tunisian secret police in their leather jackets and shades as—terribly bored—they staked out the lives of opponents of the government.

It was, I think, in a rental car on the road down from Tunis to the Roman amphitheater at El-Jem (where I was to deliver one of those “behind this attractive façade” pieces to the camera) that Kevin told me about how the 1969
Apollo
moon landing had been faked by NASA and the American government. This was a shock for me; unlike Kevin, I was old enough to have watched the One Small Step for Man on television, and it was part of my personal history, like England’s 1966 World Cup win. I wasn’t anxious to lose it.

Kevin’s argument rested on one essential proposition: all the picture coverage of the landing, moving and still, was demonstrably fraudulent. There were things happening in the pictures that were impossible, and things not happening in them that certainly should have been. These phenomena included a flag that seemed to flutter in the nonexistent lunar breeze, an unnatural absence of stars, and a certain staginess about the movement of the astronauts. All of this was attested to by an army of photographic experts and scientists who had done years of research and whose conclusions were practically irrefutable. If the pictures were fake, then, it followed, the moon landings themselves must have been counterfeited.

My immediate reaction was one of skepticism. It wasn’t that I was fore-armed with arguments to disprove his theory; it was just that it offended my sense of plausibility. My uncogitated objection ran something like this: a hoax on such a grand scale would necessarily involve hundreds if not thousands of participants. There would be those who had planned it all in some Washington office; those in NASA who had agreed; the astronauts themselves, who would have been required to continue with the hoax for their entire lives, afraid even of disclosing something to their most intimate friends at the most intimate moments; the set designers, the photographers, the props department, the security men, the navy people who pretended to fish the returning spacemen out of the ocean, and many, many more. It was pretty much impossible for such an operation to be mounted and kept secret, and inconceivable that anybody in power would actually take the risk that it might be blown. Given the imbalance in probabilities, I was therefore sure, without even scrutinizing it, that Kevin’s evidence was wrong. Besides, probably unknown to him, the entire thesis was familiar to moviegoers of a certain age: in 1978, the film
Capricorn One
had been based on a similar premise, except that time the earthbound crew had to be eliminated lest they tell the world about the non-landing. In that respect, at least the movie was more credible than the theory.

But the ball was already rolling. I became obsessed by conspiracy theories and what it was that made people believe them. Kevin was not some credulous blotter, absorbing any old liquid that his mind settled upon. He was a bright, well-educated, and commonsensical man—you could trust him when the Tunisian secret police were around. What’s more, he’d probably have characterized himself, like me, as a skeptic. So why did someone like Kevin choose to believe, and argue for, a theory that was so preposterous? I wanted to understand what was going on, not least because, at the beginning of 2002, it wasn’t just the events of 1969 that were under particular scrutiny. All sorts of conspiracy theories were springing up around the attack on the World Trade Center and the subsequent coalition invasion of Afghanistan, theories that seemed to me potentially dangerous in the worldview they expounded. As I researched, these theories didn’t evaporate or appear purely marginal. Instead they seemed to become more insidious, more pervasive.

Conspiracy in the Bookshops

We in the West are currently going through a period of fashionable conspiracism. Books alleging secret plots appear on the current affairs and history shelves as though they were as scholarly or reliable as works by major historians or noted academics. Little distinction is made between a painstakingly constructed biography of John F. Kennedy and an expensive new tome arguing—forty-three years after the event—that the president was killed by the Mafia. Meanwhile, in music and DVD chains across the United States and Britain, among the limited number of books on sale, the young browser is likely to come across oversize paperbacks with titles such as
Abuse Your Illusions
,
You Are Being Lied To,
and
Everything You Know Is Wrong: The Disinformation Guide to Secrets and Lies
.

Checking in at a rather substantial thirty dollars each, these books consist of a series of bite-size essays by different authors dealing with myriad (and, frankly, random) subjects, from the oil industry to crime, via geopolitics. Their avowed purpose is to “act as a battering ram against the distortions, myths and outright lies that have been shoved down our throats by the government, the media, corporations, organized religion, the scientific establishment and others who want to keep the truth from us.”
1

My Country Is Called Earth by Lawrence John Brown
Thrill Ride by Julie Ann Walker
The Courier's Tale by Peter Walker
Sniper Fire (Love in the Crosshairs) by Kathy Lane
This Man and Woman by Ivie, Jackie
Make: Electronics by Charles Platt
My Education by Susan Choi
Tag, The Vampire's Game by Elixa Everett
Black Tide Rising by R.J. McMillen
Fly by Night by Ward Larsen