Read Wake Up and Dream Online

Wake Up and Dream 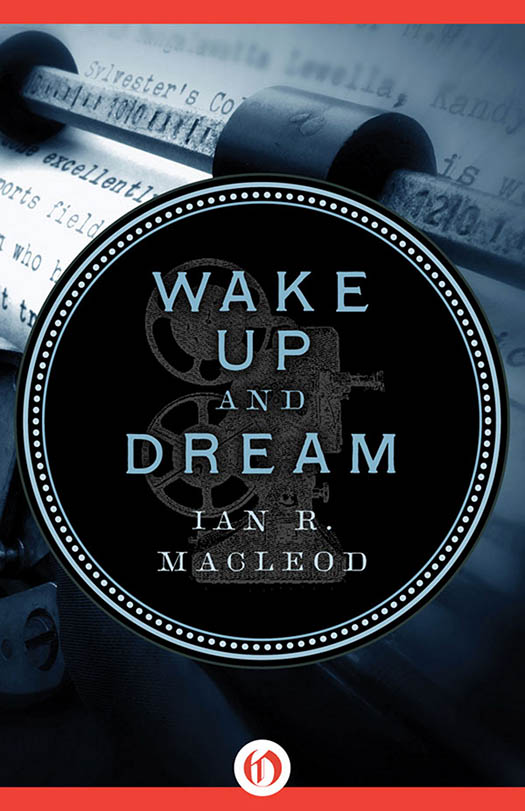 PRAISE FOR THE WRITING OF IAN R. MacLEOD

“A meditative portrayal of an exotic society, fascinating in its unhealthy languor and seemingly imperturbable stasis … so powerfully recalls Dickens’s [
Great Expectations
] that this affinity animates the entire work.”—
The Washington Post Book World

“MacLeod brings a Dickensian life to the pounding factories of London in a style he calls ‘realistic fantasy.’ It’s a complete world brought to life with compassionate characters and lyrical writing.”—
The Denver Post

“Stands beside the achievements of China Miéville. A must-read.”—Jeff VanderMeer

The House of Storms

“Ian MacLeod writes like an angel. He strings together ideally chosen words into sentences that are variously lush, sparse, subtle, bold, joyous, mournful, comic, or tragic … But it’s on the character front that MacLeod truly expends his best efforts and achieves the most.”—SF Signal

“One of the finest prose stylists around, and—borrowing as he does much of the melodrama of Victorian literature, along with the revisionist modernism of later authors like D. H. Lawrence—his writing is unfailingly elegant.”—
Locus

“Projecting Nazi Germany onto the England of the [thirties] is a most effective counterfactual device; and in the opposition of the narrator, historian Geoffrey Brook, and Britain’s Fuehrer, John Arthur, MacLeod sums up very neatly the division in the British psyche at the time, between Churchillian grit and abject appeasement.”—
Locus

Winner of the Locus Award for Best First Novel

“Confirms MacLeod as one of the country’s very best literary SF writers.”—
The Guardian

Wake Up and Dream

“Set in an anti-Semitic U.S. drifting towards collusion with Nazi Germany,
Wake Up and Dream
slowly picks at the artifice of Hollywood to reveal its morally rotten core.”—
The Guardian

In memory of Peg Entwistle

And for Jim Goddard

A
PERFECT MORNING IN LATE JUNE.
The last of the mist had burned away and the smog had yet to settle as he took the offramp from the new Olympic Parkway and rattled north through Hollywood in his battered ’36 Ford. Stargazy queues were already lengthening outside the feelie houses for today’s first shows.
Backstabber Wife
, starring Trudy Rester—whoever the hell she was—was on at the Aladdin, and
The Wonderful Prairie
and
Midnight’s Dust
were in continuous double bill at the Classic, both featuring Saffron Knowles and James H. Pack, and he hadn’t heard of them, either. Not for the first time, he told himself that he should pay more attention to the industry on which this city thrived.

Today was his chance. Up along Franklin beside the high fences of the new Paramount-Shindo studios. On past the stores offering sightseeing tours and the boys selling maps of the stars and girls selling themselves and the plateglass boutiques and the bars which were already open for the morning, or hadn’t yet closed from the night before. And up. Into the hills.

There were pines. White clouds. Air so clean it tasted like God’s aftershave. The Ford’s engine made an ominous coughing sound as it climbed the hairpins. It wasn’t used to this kind of world. Neither was he.

He took the grade above Stone Canyon. The road here kicked and turned, with fine views all the way to the Pacific. He was struggling with his street guide as it flapped on the passenger seat when a siren blooped behind him. Cursing, he pulled away from the drop and into the farside verge as the other car swung around in front just before a large private estate sign that announced Woodsville.

Not a police car, although you’d have to look twice to be sure. The same black Mercury sedan the LAPD used. It even had the siren, and the blue toplight, although a badge on the side announced Gladmont Securities. Upscale areas like this used these kinds of companies to keep out sightseers and ne’er-do-wells.

Just to show willing, he uncricked himself from his Ford and put on his best
aw shucks
grin as the security guard—who was lean and tall, and carrying a gun in a pop-down leather holster on his belt—approached. The sunlight was turning the waters of the reservoir beneath them to glittering gold. The sun was doing a pretty good job up here all round.

“You got business in this area?” The security guard was wearing aviator sunglasses and the sort of uniform you saw in pictures of those German parades, right down to the peaked cap. The armband might as well have had a swastika, but it was just another Gladmont Securities shield.

The security guard’s reflected gaze traveled up and down more slowly. Absorbed in greater detail the suit, which was faded yellow at the hem and edges from too much dry cleaning, the frayed necktie which had worked loose from his shirt collar, which was loose and frayed as well, and finally the shoes, which lacked the intense shine of the trouser knees. The gaze then traveled back to the dusty, two door, black Ford Tudor which had seen considerably better years, let alone days.

“Maybe this’ll help…” He reached into the outside pocket of his suit coat and removed a letter. It drooped from the dampness of his fingers as he held it out.

The security guard’s thin lips pursed as he studied it. “So you’re the addressee? Clark Gable?”

“And you’re here to see a Mrs April Lamotte up in Woodsville?”

“She wrote the letter. Said that was what she wanted. As you can see, I’m supposed to be there at ten o-clock.”

“The longer we stand here, the more I’m late.” “Do you have any other proof of identity?”

Making sure he got the letter back first, Clark reached into his top pocket and produced one of his business cards. Watching as the security guard studied it, he decided he really needed to splash out on a fresh print run without the telephone number changed and then crossed out. “So you’re a private eye?” The security guard folded over the card’s corner and pocketed it.

The security guard didn’t exactly raise his eyebrows; at least not as far as Clark could tell behind those sunglasses. It was more subtle than that. “You’re carrying a gun?”

“Never could bother with the things.” He opened his arms to show willing. “Pat me down if you like.”

What Clark could see of the tan, long face remained resolutely deadpan. This guy wasn’t much like any security guard he’d ever encountered. Far too young and too slim to be an ex-cop, and most of the rest were paid bullies. Then there was his light voice and cultured manner, which didn’t fit either—more like the guy was playing a role—although he reckoned the explanation was most likely the usual one you found when you came across someone doing seemingly odd work in this city. With those nice cheekbones, that regular complexion and thin, expressive mouth, he was probably just another actor between roles.

The security guard gave an eloquent smile, then he turned from Clark and with a rasp of his steel-tipped heels strode over to the far side of the road. He began to whistle tunelessly as he regarded the view. “Some fine morning, isn’t it, Mr Gable?” he said eventually.

“I was just thinking the same myself.” The whistling began again. The birds sang. The guard remained standing gazing at the view across the reservoir. Clark got the impression that this was one of those moments which could go on and on.

“By the way,” he asked, “you don’t happen to know the exact way I should be going to get to my client, do you?”

"The
exact
way?" Something close to amusement played across the guard's face as he turned and wrapped his long fingers around his gleaming belt. "Don't think I do. All I can honestly recommend, Mr Gable, is that you keep on going in the direction you're already on … "

W
OODSVILLE. AN EXCLUSIVE DEVELOPMENT
of the kind you saw advertised in the back of shiny magazines, but never for real. He passed a clumpy-looking guy pushing a wheelbarrow beside the lush hedges. A place like this, even roadsides were planted with brilliant borders and kept trim and neat.

There were no gates. No dogs, either. Or only the sort that sat on their matrons’ laps and licked the cream from their coffee. No sign of any of the security guard’s colleagues, either, and Clark was just starting to wish he’d stopped to ask the wheelbarrow guy for directions when he saw a big slab of polished stone carved with the word
Erewhon
on a slope beneath a fuchsia hedge. He braked and turned up the steep drive.

The overheating Ford made it across the last of the gravel before it stalled. There were big bushes of bright flowers. There was cool dampness in the air which felt good on his face as he climbed out and unpicked his suit from off his back and around his crotch. The house was a Chinese puzzle in glass and brick, when he’d been calculating on mock Gothic or farmhouse French. But that was probably next door, and the one which looked like a Greek or a Roman temple would be the one beyond that.

Two cars were parked by the steps. One was a dark red Cadillac Series 90, the latest model with the V16 engine, and the other a rare and beautiful cream-colored French sports coupé—a Delahaye. His Ford Tudor, which was wheezing and ticking like an unsprung clock as it cooled, didn’t look like a machine which had been designed to serve anything remotely like the same purpose as these. The Delahaye was particularly superb. Its top was down. There were so many buttons and switches it looked like the console of an airplane.

Erewhon’s front door was smoked glass. The sides around it were angled, and of glass as well. Several dozen different versions of Clark Gable swam up to him as he climbed to the last stretch of marble and searched for a doorbell, or a knocker, or anything resembling a handle. Then came a small, electric hum, and the doors opened neither in nor out, but sideways into hidden recesses.