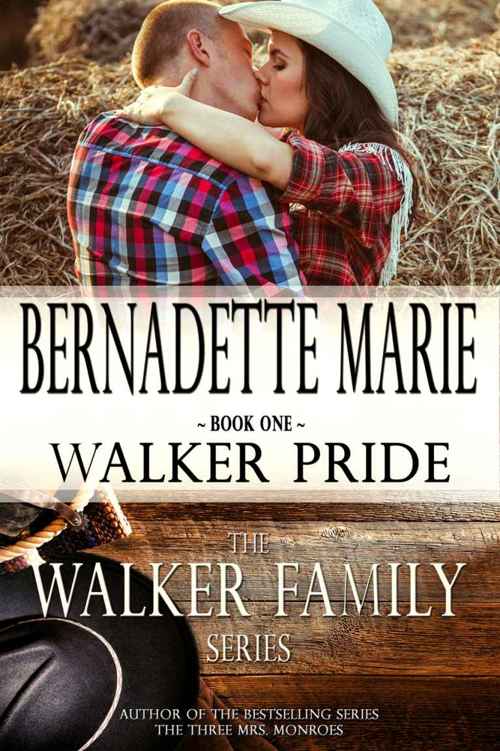 There is great pride in being your wife

and the mother of your children.

I love you, forever and a day.

To my Fab 5 who forever inspire me with all of the amazing things they do and the men they are becoming…I love you.

To my man who has more faith in me than I do in myself…I love you.

To my mom, dad, and sister who keep me grounded in who I am…I love you.

To Connie, Clare, and June who grin and nod when I need them to and then get the work done that I neglect…THANK YOU!

To my Street Team, my readers, and my fellow authors who bring me back to the computer every day to do what I love because they share their support with me…Thank you!

This is an exceptionally exciting journey! A new series and a new family to fall in love with.

When it was time to build this family, the Walkers, I reached out to my readers and they helped me build this amazing family and they voted to settle them in Georgia. I am blessed to have these special people reach out to me and become my friends.

Eric Walker was an instant attraction to me. I knew from the moment we decided on him that he was going to be a man with some deep seeded feelings. I hope that in creating Susan, a woman with a good head on her shoulders, I was able to make him loveable in the way I felt him.

This family will be particularly fun because not all of them are likable—yet. They all have some demons and some secrets, but the fun will be when we get to sort that all out.

Welcome to the Walker Family. Enjoy your stay!

Fog rolled in over the ground, giving the acreage around the house an eerie feel.

Eric Walker pulled up the collar of his jacket and let out a sigh. It was appropriate for the day to be gloomy, he thought. When you laid someone
in
the
ground,
it was fitting for it to rain or be down right cold, as it was today.

He walked down the old steps of the house to his truck, which waited for him like a good horse. Always ready for an adventure. He’d have taken his horse, but his stepmother would frown on it. Not that he’d have cared, but for his father’s sake he chose not to.

As he climbed into the old Ford, its red paint faded and its fender bent in, he kicked the mud off his boots before he swung his feet inside.

Some things were sacred like the inside of a man’s truck. Though the outside had seen many days in the fields, the inside was an oasis of new interior, which pleased Eric.

The engine would be the next upgrade, he thought as he gave her some gas as he turned the key. There was some hesitation, but a moment later she roared to life, ready to take him anywhere.

Eric avoided the main house as much as he could.

He hadn’t been very old when his mother died, but while she lived in the big house, she had added her touches. Rooms were decorated feminine and they just felt homey.

Of
course,
he would think that. His mother had done the work herself and had taken great pride in it. But when she passed away and a year later his father remarried. Glenda changed everything.

He’d been ten when the last room received its final coat of new paint and he’d held that grudge since.

As the road to the house tossed him back and forth he adjusted the dial on his radio. It was the kind of day for wallowing in misery with Hank.

His mother loved Patsy Cline. He could still hear her singing as she painted his childhood bedroom.

It was foolish for a man of forty to think so far back and get so worked up, but funerals did that to him.

It had been his grandfather, George Walker, they’d laid to rest in the family cemetery and that was what made him start thinking about his mother.

Her headstone was a mere few feet from his
grandfather’s
. CONSTANCE WALKER. The letters had seemed so big for such a small woman.

Eric could have done with walking away after the old man was lowered into the ground yesterday, but now he had to trek to the house to hear the will.

He couldn’t have cared less about who got what. His grandfather had always promised him the
house
on the edge of the property, where he’d lived since he was eighteen. There was no reason to assume he’d go back on his word.

Eric wondered about some of his cousins though. Would greed set in?

His own brothers were much like him. They were grateful for what they had. They worked hard and made honest livings. Everett Walker hadn’t raised his boys to be anything less than honest men. That alone gave Eric some pride.

He loved his brothers. He was eight when
Dane
had been born and there had been a lot of honest
animosity
, but that had come from a boy who missed his own mother.

Glenda, though she changed the house’s décor, was the best replacement for his mother Eric could wish for. She never treated Eric as though he were someone else’s child. She raised him as her own, with respect to his own mother.

Eric kicked up the heat in the truck as he crossed over the little bridge that connected the two original pieces of land over the small creek, which divided it.

All of his cousins had been at the funeral.
Well,
everyone but Bethany. It was completely possible his uncle Byron had forgotten to tell her that their grandfather had died at all. Or, she was so busy with her life in L.A. it was just too much to pack up to say goodbye to a grandfather she really didn’t know.

Eric’s uncle was a piece of work himself, he thought as he slowed to check the cattle grazing in the field to his right.

Byron Walker had five children, just as his father did. Only he’d been married and divorced twice and he’d never even married Bethany’s mother.

His father and uncle were complete opposites. Everett Walker, his father, was a family man. He was committed to each member of his family and to his wife. He saved money, nearly to a fault, Eric thought, and he worked harder than any other man Eric had ever known.

His uncle Byron, on the other hand, loved to live life as if it were a party. He’d nearly gone bankrupt three times.

It was well known he was not a faithful husband, which could have been why he’d been married and divorced. And his children were just people who had passed through his life.

Eric got along with his cousins, but they had never had a chance to become close. They came for visits when they were growing up and Todd had worked on the land for years, but he kept to himself.

It only made the drive to the house that much worse by thinking about everyone being in one room—together.

There were at least a dozen vehicles parked in the loop out front of the main house, each one as different as its owner.

Eric parked the furthest away. If he were able, he’d be the first one out. He stepped out of the truck onto the soft ground. Rain had softened the ground and he was sure his stepmother was already fit to be tied with the shoes coming into the house.

His father wouldn’t tolerate her asking everyone to kick them off at the door. Eric could lay down bets that the carpet cleaner van would be parked there by tomorrow morning.

Not wanting to make a grand entrance, as the last one to arrive, he walked around to the back of the house and pulled open the back door.

The woman standing in his mother’s kitchen jumped and placed her hands on her chest.

“You startled me,” she gasped and let out a breath.

Eric looked her over. He’d seen her before, but he couldn’t put a place to it.

The woman kept working. There were assorted trays on the counter and island. Obviously she was a caterer, and that was where he realized he knew her. She’d catered the reception after the funeral.

Eric toed off his boots. It was the least he could do for his stepmother, even if he hated the idea.

“Mrs. Walker wanted to have a small sandwich service while the attorneys were here.”

Eric nodded. “Platters of meats and breads. She hired you to do it?”

The woman shrugged, perhaps brushing off the insult he’d landed on her. “It’s what I do. Yesterday’s buffet was okay wasn’t it?”

She grinned as she continued to work. “Fine. This is why I need a sit-down restaurant so I can create items that are more than fine.”

She raised her eyes to meet his. “I know. This is what I have to do to pay for culinary school. Someday it will be much more than sandwich trays and buffets.”

Dylan and Taylor (Soul Mates 101 Series) by Wolfe, Scarlet
The Outcast Dead by Elly Griffiths
Tabula Rasa by Kitty Thomas
A Most Unladylike Adventure by Elizabeth Beacon
Undying Hope by Emma Weylin
Cormac: The Tale of a Dog Gone Missing by Sonny Brewer
The Hotel New Hampshire by John Irving
Blood of the Emperor by Tracy Hickman
It Was the Nightingale by Henry Williamson
Betrayal by Lady Grace Cavendish