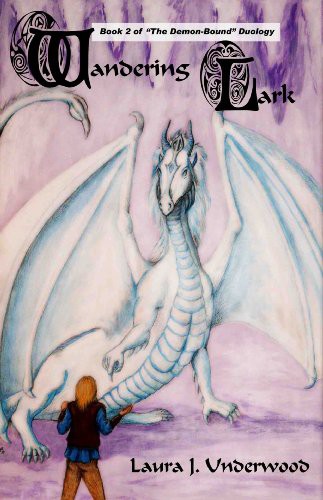 The Chronology of the
Tales of Ard-Taebh

The Dancing Stones of Nevermhor
(novella in
Tangled Webs and Other Imaginary Weaving
from Dark Regions Press, 2002)

Book 2 of “The Demon-Bound” Duology

This is a work of fiction. All the characters and events portrayed in this book are fictitious, and any resemblance to real people is purely coincidental.

All rights reserved. No part of this book may be reproduced in any form or by any electronic or mechanical means, including information storage and retrieval systems, without permission in writing from the publisher, except by a reviewer, who may quote brief passages in a review. Any members of educational institutions wishing to photocopy part or all of the work for classroom use, or publishers who would like to obtain permission to include the work in an anthology should send their inquiries to Yard Dog Press at the address below.

This Book is Dedicated to the Fans who

Thank you for hanging in there.

For those who enjoy tales
of mages and demons, bards and oracles, runes and curses and intrigue on all levels, WANDERING LARK will prove a satisfying read. Layer upon layer, complication within complication, Laura J. Underwood has created an intricately structured world in which her characters face multiple challenges.

To understand how she’s done this, it helps to have heard her play the harp and to cross blades with her. I’ve been privileged to have both experiences. She plays difficult music with the skill that comes only from long hours of study and practice. And, if it’s possible to say this, her skill with a blade is even greater than her skill with the harp. In the midst of a chaotic fencing event, she never loses her cool—and it’s clear that skewering fools is one of her greatest delights.

All that requires the ability to hold complicated patterns in mind, and bring them to a harmonious end (the final chord on the strings, the opponent stretched on the floor, disarmed). So the complex plots, the complex characters, come as no surprise to those of us lucky enough to have heard the singer or fenced with the swordswoman. Now it’s your turn to dance to that harp and follow the music and the magic into the world of
Wandering Lark
.

Why in the name of Cernunnos did Fenelon send me here?

Alaric knew this place, and his last encounter with it was not his most pleasant memory. This was Marda’s old stone hut. Now it was as quiet as a tomb, except for the raven that had taken to roosting in the rafters, and the chuckle of stoats in the walls. Marda’s personal things had been long since removed or buried with her. Only the furnishings remained, and those had developed a patina of dust. There was no evidence that anyone had lived here in the time since her death, yet in some ways, Alaric could not shake the sense of her lingering presence. When he tried to home in on that essence, it faded. The only sign that anyone had been here at all was the cairn of stones now decorating one corner of the yard.

Vagner stood close to the door, glancing out at the forlorn view of high hedges and stone walls. In the distance, mist rolled over the boggy land of Mallow, though it was only visible to mageborn or demon eyes. Night had already fallen in this part of the world.

“Are you hungry?” the demon asked. “I’m famished.” He sounded almost hopeful. “If you like, I’ll fetch us some coneys...”

“Since when did what I desire stop you from feeding yourself?” Alaric said, and realized his own words rang with exhaustion and anger.

“I cannot go if you do not allow it,” the demon said softly.

Alaric frowned. “If that’s so, why can’t you take me back?” he asked vehemently, slashing the air with one hand and relishing the moment when Vagner actually cringed. “Tane is dead, and I am your only master now...”

“No, I still have two masters,” Vagner said.

“What? Are you telling me Tane is able to control you from inside your stomach now?”

The demon shook his head and grinned. “No. Tane is mere indigestion at the moment. But the other... When I bonded with you, I felt the other in you bonding to me as well. Who do you think helped me overcome my bond to Tane so that I could kill him without hurting myself? It certainly wasn’t you...”

Alaric opened his mouth to speak, but nothing came.

“Aye?”
Ronan said, his spirit whispering around Alaric like a breeze.

Alaric closed his eyes and took a deep breath. He waved at Vagner in a weary fashion.

“Thank you,” the demon said, and shifting forms into that of a raptor, he flew from the hut and vanished into the mist.

“Happy hunting,” Alaric muttered as he wandered away from the open door and sat on the old stool before the empty hearth.

“Isn’t that dangerous?” Alaric asked. “I mean, sooner or later, Turlough and the others will figure out where Fenelon sent me.”

“We have plenty of time,”
Ronan said.
“Etienne covered Fenelon’s gate, and I am willing to bet at this moment, some poor mageborn is learning whether or not he can swim.”

“Etienne would never do anything so foolish,” Alaric insisted. He leaned over far enough to select a few chunks of peat from the pile on the corner of the hearth and tossed them into the empty grate. Then, he whispered
“Loisg”
and watched as the flames took hold, filling the room with warmth and the pungent, woodsy smell.

“Desperation can make even the most pious curse,”
Ronan said, his voice hinted amusement. And Alaric could imagine the expression that accompanied it as well. He’s seen that smile often enough when Ronan was alive. A serious smile. A beguiling smile. One filled with intrigue. And guaranteed to make Alaric distrust him all the more now.