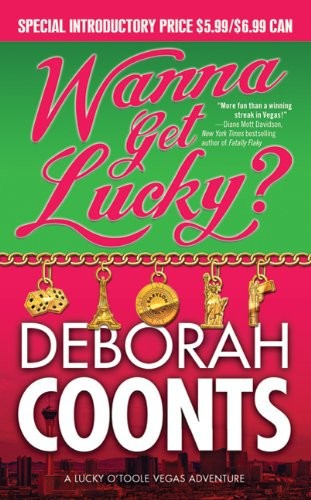 This is a work of fiction. All of the characters, organizations, and
events portrayed in this novel are either products of the author’s
imagination or are used fictitiously.

To Tyler and Steve,
without whom there would be no magic

My friends are living proof that truly, no good deed goes unpunished—either that, or unbeknownst to me, there’s a charity called Adopt-A-Novelist and my friends are fulfilling their philanthropic obligation—earning their way into heaven—which, between you and me, they did years ago.

As a token of my gratitude, I would like to thank:

Barb Nickless, Maria Falconer, and Jimmie Butler
, my writing co-conspirators, cohorts in all sorts of imagined crime and hilarity. Thank you for believing, cajoling, commiserating and for the interesting tales about adult video parlors.

Polly List
, who, despite me telling her that all of the scenes in this book were products of my imagination, still allows me to have unsupervised visits with her children. Polly read every word, agonized over every character arc, killed many a bottle of pinot grigio, and in a true testament to friendship, willingly sacrificed her size-eight jeans in bouts of chocolate therapy (the only known cure for writer’s angst). She is truly a friend to walk through time with.

Susan Gleason
, my agent, who believed in me even when I didn’t understand what “write from the heart” meant. A real pro, a
wonderful human, a true friend—and a connoisseur of humor, wacky and wry.

Robin Cloyd, Rachael Quereau, Suzanne and Jerry Graham, Elizabeth Kobylarz, and Mary Sayers
, who read every word, multiple times, and will still talk to me.

Tom Doherty
, the kind of publisher writers dream about but so rarely get.

Bob Gleason
, a superb editor and an even better friend.

Last, but never least, thank you to my son,
Tyler
, who can’t understand why I am not writing graphic novels, but who loves me anyway (even when I write about sex). And to my husband,
Steve
, who insisted I could write humor since I had the most warped sense of it he had ever known . . . I’m still not sure what he meant by that . . . but I ran with it.

Am I a lucky girl, or what?

A
s her final act on this earth, Lyda Sue Stalnaker plummeted out of a Las Vegas helicopter and landed smack in the middle of the pirates’ lagoon in front of the Treasure Island Hotel, disrupting the 8:30
P.M.
pirate show.

The video ran as the lead-in for the 11:00
P.M.
news. I caught it on a television in the sports bar. Actually, it was amazing I caught it at all. My name is Lucky O’Toole, and I am the chief problem solver at the Babylon, the newest, most over-the-top megacasino/resort on the Las Vegas Strip. I’d been fighting my way through the crowds packing the casino on my way to Stairwell Fifteen to deal with a naked man asleep under the stairs when I caught the television feed out of the corner of my eye.

A grainy video of a helicopter with the Babylon’s script logo
painted on the side appeared on the screen with a small head shot of Lyda Sue in the corner—it was Lyda Sue’s sweet smile that actually captured my attention. I leaned over the backs of two guys playing video poker at the bar, a sinking feeling in my stomach. In Vegas, nobody gets their picture on the news unless they’ve committed some grisly crime or have been a victim of one themselves.

Of course I couldn’t hear what the talking heads on the television were saying. The clamor of excited voices from the casino combined with the pinging from the video machines and the piped-in music to create a cacophony of excitement that made it not only impossible to talk, but to think as well.

Eyes wide, I watched as the station ran the video again—this time the full version as part of their newscast.

Hovering above the lagoon as the show began, the copter began to buck and roll. A body tumbled out, backward or forward—it was hard to tell. Thankfully, the final impact with the water was hidden behind the pirate ship advancing toward the British with cannons belching fire and smoke. The picture tilted, then went dark—a head shot of Lyda Sue taking its place.

“Ms. O’Toole?” My Nextel push-to-talk vibrated at my hip. “Are you coming?”

I grabbed the device and pushed the direct-connect button to shout. “What?”

I pressed the thing to my ear as I tried to hear.

“Ma’am, this is Sergio at the front desk. The doctor’s with our naked guy. He’s fine—apparently sleeping off a bender. But we got another problem—some guy in Security by the name of Dane is insisting we call the paramedics just to be on the safe side.”

I stared at Lyda Sue’s picture on the television, my mind unable to process what I saw. The video switched to the police, a body covered with a white cloth, one delicate hand dangling from the stretcher as they loaded it into the back of an ambulance. Nobody was in a hurry.

The question snapped me back. “Sorry. Naked guy in the stairwell, right. Do
not
call the paramedics unless the doctor wants
them. We don’t need to cause a scene and have this guy splashed across the pages of the
Review-Journal
in the morning—I’m sure he’d love that.” Trying to steady my nerves, I took a deep breath. Instantly I regretted it. Smoke-filled air assaulted my lungs, bringing tears to my eyes. “I’ll be right there, and I’ll deal with Dane.” I choked the words out as I struggled to catch my breath.

I reclipped the Nextel at my waist.

I fought to not only clear my lungs, but to clear my thoughts as well—a Herculean task as hundreds of questions pinged around inside my head.

Lyda Sue, dead? I’d seen her just last night, holding forth on the end stool at Delilah’s Bar. We’d talked for a minute or two; her world had seemed stable enough. Twenty-four hours later she took a header out of our helicopter, landing smack in the middle of the 8:30
P.M.
pirate show. What had I missed?

Damn
. Lyda Sue was dead.
Double damn
. She fell out of
our
helicopter. The Babylon would be big news. My job was to keep the Babylon
out
of the news. Or to take the fallout when I failed. The Big Boss was not going to be pleased.

Tonight was shaping up to be a doozie.

I muscled between the two guys intent on their video poker monitors and leaned across the bar so the bartender could hear me. “Get the news off that television. Find a sports feed or something.”

The real world had no place in this fantasyland
.

My mind clicked into gear. I couldn’t wait to get my hands on that pilot. He should have called me right away. Lyda Sue hit the lagoon at 8:30. Damage control was tough enough without giving the newshounds and gossip mongers two and a half hours head start. I had a feeling that nothing short of an overnight nuclear test at Yucca Flats would keep us out of the morning headlines now.

Nevertheless, I grabbed the Nextel, and started in. “Jerry?”

“Yo,” our Head of Security answered in his laid-back manner.

“I want our pilot in my office right now—handcuff him and drag him there if you have to. Next, get over to Channel Eight. I want all
copies of a tape Marty ran on the eleven o’clock news of a woman falling out of our helicopter. If he refuses, remind him of that awkward little situation at the opening gala—he’ll know what you’re talking about. Bring the tapes to me when you get them.”

“Oh, and Jer? I almost forgot. What’s the status on the mega-millions winner? Did she actually hit it?”

“We’re working on it. I’ll have an answer for you in the next half hour—our plate’s sorta full.”

“Welcome to the club. Thanks.”

I disconnected then scrolled through the stored numbers looking for Dane’s as I turned to head toward Stairwell Fifteen. Paramedics! Was the guy nuts?

A Buyer's Market by Anthony Powell
06 - Eye of the Fortuneteller by R.L. Stine - (ebook by Undead)
The Dogs of Mexico by John J. Asher
Taking Her Time by Cait London
The Ugly Duckling by Iris Johansen
Kakadu Sunset by Annie Seaton
Fear the Abyss: 22 Terrifying Tales of Cosmic Horror by Post Mortem Press, Harlan Ellison, Jack Ketchum, Gary Braunbeck, Tim Waggoner, Michael Arnzen, Lawrence Connolly, Jeyn Roberts
Romancing the Pirate 01.5 - Beneath The Water's Edge by Jennifer Bray-Weber
Fall into Him by Evelyn Harper
Oz Reimagined: New Tales from the Emerald City and Beyond by Unknown