War of the Spider Queen 2 - Insurrection 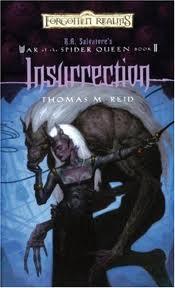 WAR OF THE SPIDER QUEEN

You, like a good book,
are a wondrous treasure
in a small package.

A very special thanks to my editors, Philip Athans and R. A. Salvatore; this book is so much better for your tireless efforts. Also, thanks to Richard Lee Byers and Richard Baker; one's a new friendship and one's an old one, but both of you were there "guarding my flanks."
She felt as if a bit of herself was sliding from her womb, and for a moment she felt diminished, as if she were giving too much away.
The regret was fleeting.
For in chaos, the one would become many, and the many would travel along diverse roads and to goals that seemed equally diverse but were, in effect, one and the same. In the end there would be one again, and it would be as it had been. This was rebirth more than birth; this was growth more than diminishment or separation.
This was as it had been through the millennia and how it must be for her to persevere through the ages to come.
She was vulnerable now—she knew that—and so many enemies would strike at her, given the chance. So many of her own minions would deign to replace her, given the chance.
But they, all of them, held their weapons in defense, she knew, or in aspirations of conquests that seemed grand but were, in the vast scale of time and space, tiny and inconsequential.
More than anything else, it was the understanding and appreciation of time and space, the foresight to view events as they might be seen a hundred years hence, a thousand years hence, that truly separated the deities from the mortals, the gods from the chattel. A moment of weakness in exchange for a millennium of surging power. . . .
So, in spite of her vulnerability, in spite of her weakness (which she hated above all else), she was filled with joy as another egg slid from her arachnid torso.
For the growing essence in the egg was her.

A Father for Her Triplets: Her Pregnancy Surprise by Susan Meier
The Shockwave Rider by John Brunner
Eyes on You by Kate White
Wrecked Book 4 by Hanna, Rachel
The Woodshed Mystery by Gertrude Warner
One In A Billion by Anne-Marie Hart
A Tattered Love by Nickie Seidler
Conquering Alexandria by Steele, C.M.
The Frozen Witch Book One by Odette C. Bell
Too Close to Home by Lynette Eason