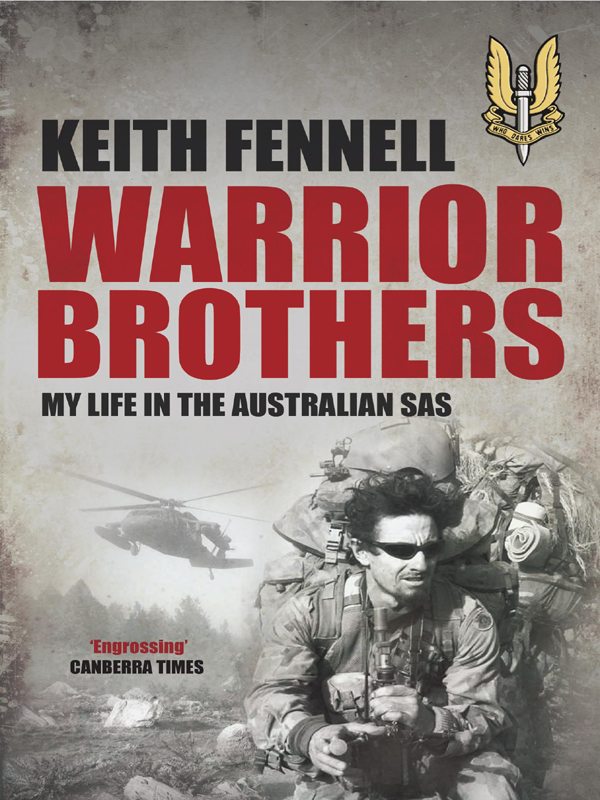 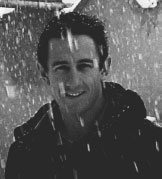 Keith Fennell was born in 1973. At the age of 21 he joined the elite Australian Special Air Service Regiment. He was deployed on many operations, including missions to Afghanistan, East Timor, the Solomon Islands and the southern Indian Ocean. Fennell also served on a medical deployment to East Africa, was a member of the boarding party in the controversial MV
Tampa
incident, and supported counter-terrorist operations for the 2002 Commonwealth Heads of Government Meeting (CHOGM) in Brisbane and the Sydney 2000 Olympic Games.

Fennell left the SAS in late 2002 and moved to the United Arab Emirates, where he was employed as a special operations adviser. In January 2004, Fennell accepted a position in Iraq, and he spent the next 30 months running operations there, in Afghanistan and in Banda Aceh. In June 2006 Fennell returned to Australia. He is now completing a double degree in Creative Arts and Arts at the University of Wollongong. Fennell is married and lives with his wife and three children on the South Coast of New South Wales. 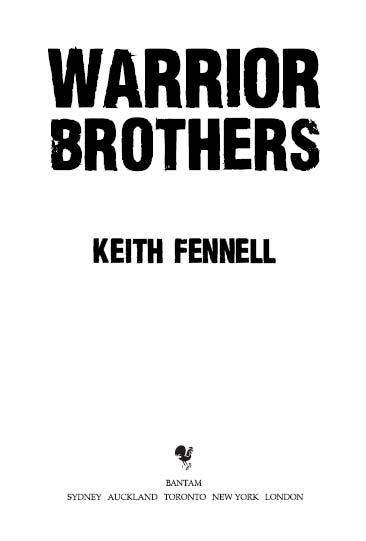 First published by Bantam in 2008
This edition published in 2009

All rights reserved. No part of this book may be reproduced or transmitted by any person or entity, including internet search engines or retailers, in any form or by any means, electronic or mechanical, including photocopying (except under the statutory exceptions provisions of the Australian
Copyright Act 1968
), recording, scanning or by any information storage and retrieval system without the prior written permission of Random House Australia.

For Joe Bresler,
who, to me, personified the true meaning of the word
warrior
.
RIP, old boy!

And for my wife, Colleen.
It is to you I owe the most.

Rounds are being exchanged in both directions. Little pieces of potential death are cutting through the air, searching for flesh. Ears are ringing. Eyes are large and round. Then there is silence.

And Jimmy: âWhere are they?'

âThere were six of them in the creek â I think I shot three of them,' I reply.

Suddenly there is frantic movement 50 metres to our front. The dense foliage is parted by men running for their lives. There is more shooting, then nothing. Just the sound of pounding, thumping hearts.

I move across the creek and then I see him. His motionless body is lying face-down in the dry, sandy riverbed. There is no movement, no life. His arms are stretched out in front of him, as if his last movements were to beg his friends to come back and make everything all right. His shoulder-length hair â thick, black and curly â is filled with dust, and his physique is strong. He is wearing shorts and a dark-coloured T-shirt. Four or five darker patches indicate the bullets that have entered his upper torso.

The image of this man's death remains seared in my long-term memory. I've tried to push it into the short-term, tried to lose it, but the picture is so deeply etched that I know it will stay in my mind forever.

What was it like to be an SAS soldier?

When I reflect upon my experiences, my heart jumps into overdrive, beating harder and faster as I feel the blood whooshing through my veins like a runaway train. My military life made me feel alive and on the edge, and my body still craves this. Perhaps a person in a regular, nine-to-five job â excluding those who are addicted to extreme sports â would find an addiction to danger a little hard to fathom, but how could they be expected to understand? An SAS soldier's work is more than just exciting. Driving a fast car is exciting. But for me, this profession had become an addiction, a set of experiences comparable to nothing else.

I was accepted into the Australian Special Air Service Regiment in 1995, aged just 21. In the 11 years that followed I saw operational service and worked as a civilian security contractor around the world: from East Timor to Afghanistan, the southern Indian Ocean to Iraq. In 2006 I made the decision to come home for good. I needed to be with my wife, Colleen. I needed to be a father to my children.

I had always thought I'd be able to ease into a suburban existence, but this may not be the case. I am locked in my past, and when I look at my new life I feel like a ghost â an outsider looking in. One day I was in Iraq, locking eyes with a man who wanted to kill me, and the next I am at a mother's group with my kids, hanging out with a group of women I have never met, sipping lattes and talking about Tom Cruise.

I want to be able to enjoy the things that others enjoy and to feel content and complete with this. But my past does not make this possible. Things I enjoyed before I joined the SAS â adventure rides, fast cars, motorcycles, diving and parachuting â now appear bland. Have I been spoilt by my experiences or destroyed? I don't know.

It is hard for people to understand this, which only adds to
the torment. Who can you talk to about such things? My friends in the Regiment were taking bets on how long it would be before I realised my destiny and came back. My new life as a husband and a dad hasn't been easy to accept, and sometimes the thought of returning to Afghanistan or Iraq seems the easier option. Closing my eyes results in an instant quickening of heartbeat and breathing, my palms begin to sweat and my right foot taps anxiously against the floor. Life in the SAS was all-consuming and I've struggled to let it go.

Some nights I dream of an explosion. The blast kills my friends but spares me. I am taken prisoner, placed in a cell with only a small, barred window to the outside world. With a growing sense of panic, I stand at the bars, trying to work out where I am. I can see a military convoy in the distance. Once I manage to free my hands, I begin to get my bearings. It looks like Fallujah.

Sometimes, in the dream, I manage to kill the guard who has been taunting me. Other nights I make it out of my cell and get all the way to the Euphrates. I jump in with my hands cuffed behind my back and watch while insurgent forces scour the banks for me. Once they work out where I'm hiding, they begin to pour lead into the river. Slowly I double back, desperate to escape, and lie hiding, moments from capture, almost under their feet in the reeds.

Other nights I find myself running through the familiar streets of Iraq's International Zone when a black van runs me down and breaks my legs. I am thrown in the back of the van and held down by the Iraqi workers inside. The van is hot and, no matter how hard I struggle, I can't move. I hear us pass through the military checkpoint while a hand covers my mouth and another squeezes my throat. Pinned to the floor, I can hear the US guard asking routine questions. He cannot hear my muffled screams. He cannot hear me thrashing in the back of the van. He lets us through the checkpoint. We drive on. That's it.

After my dreams leave me, I lie awake and confused, charged with exhilaration and anxiety amongst sodden and dishevelled sheets. In the Regiment, my fears had never been for my own wellbeing. Even when I was employed as a security operations manager working in Iraq and Afghanistan, my greatest anxiety was that a poor tactical decision could contribute to the death of a mate or colleague. In the context of operations, guilt, angst and fear were all tied up with supporting the guys. And yet when at home in New South Wales, with my family around me, inexplicably my dreams revolve around my own capture. The reason for this still eludes me.

Making a smooth transition from a life of adrenaline-charged experiences as an Australian SAS soldier to one of a civilian is near-impossible. The thirst for that moment of heightened senses, of racing pulse â caught in the moment, your entire body stretched tight with effort and adrenaline â leaves an indelible mark on your soul and psyche. Getting into the SAS was tough, but that was nothing compared to saying goodbye.

Sometimes it appears as if your life is travelling smoothly: all the stars align, you are unstoppable, invincible. Then you can be hit by a pain that pierces your chest and leaves you numb: the news that someone you were close to, whom you respected and who touched your life, is no longer alive. I've felt this too many times, and never more than in 2007. Tapping away at my keyboard, I'm flooded with images. I see war zones and bomb victims. I see again the motionless body of the first man I ever killed, face-down in that dry, sandy riverbed in East Timor. I see the faces of friends who will never come home to hold their children. This is for them.

As this book has slowly taken shape, I've been struck by the realisation that the adrenaline rush, the challenge and
the exhilaration â these aren't what I miss most from my old life. It is the men whom I was privileged to work beside. While my experiences were invigorating, it will always be the mateship that I cherish most, the camaraderie forged by sharing adventures with the most incredible men I'll ever meet in my life â my Warrior Brothers.

Who appear when trouble confronts

Who runs forth to defend

Or whenever I need

To form the union of

Embrace in combined strength during adversity
And nothing, not even death, will ever sever this bond.