Read Watching the Climbers on the Mountain Online

Watching the Climbers on the Mountain 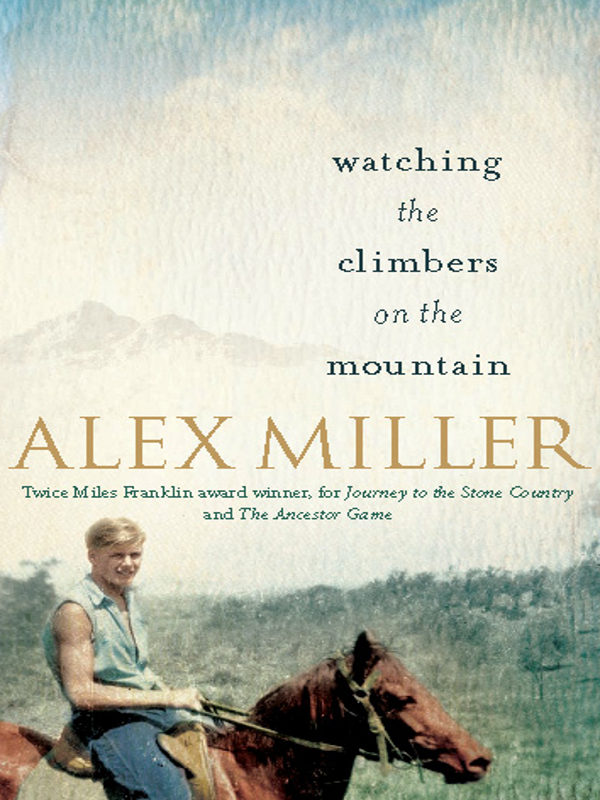 Alex Miller is twice winner of Australia's premier literary prize, the Miles Franklin Literary Award, first in 1993 for
The Ancestor
Game
and again in 2003 for
Journey to the Stone Country
. He is also an overall winner of the Commonwealth Writers' Prize, in 1993 for
The Ancestor Game
. His fifth novel,
Conditions of
Faith
, won the Christina Stead Prize for Fiction in the 2001 New South Wales Premier's Awards. In 2011 he won this award a second time with
Lovesong
.
Lovesong
also won the People's Choice Award in the New South Wales Premier's Awards, the
Age
Book of the Year Award and the
Age
Fiction Prize for 2011. In 2007
Landscape of Farewell
was published to wide critical acclaim and in 2008 won the Chinese Annual Foreign Novels 21st Century Award for Best Novel and the Manning Clark Medal for an outstanding contribution to Australian cultural life. It was also short-listed for the Miles Franklin Literary Award, the Christina Stead Prize for Fiction, the ALS Gold Medal and the Commonwealth Writers' Prize. Alex is published internationally and widely in translation.
Autumn Laing
, his tenth novel, was published to wide acclaim in 2011.

First published by Allen & Unwin in 2012

A small Queensland cattle station during the height of summer is a place where events that are quite out of the ordinary may sometimes occur. There is, at that time of the year in such places, an enforced dislocation of the regular rhythms of daily life. The sense of isolation deepens with the coming of the season of storms and the intensification of the heat. In addition to distance there is the problem of periodically impassable roads. The herd of beef cattle is better left to its own devices until the autumn mustering, and so the occupants of the station have nothing to do. Or at least they must make an extra special effort to do something becauseâexcept for the small everyday chores the very repetition of which tends to emphasise the monotony of lifeâthere is nothing that must be done.

There is a cattle station in the Central Highlands of Queensland where a few years ago an event took place which shocked the local community and for which there seemed at the time to be no rational explanation. The people involved in this tragedy were a young stockman, the owner/manager of the station and his wife, together with their two children, a boy aged eleven and a girl aged thirteen.

The stockman was Robert Crofts, an immigrant from England. He was a glutton for hard work and since his arrival the area around the homestead had been greatly smartened up. Where there had been a haphazard pile of branches and logs overgrown with rank burrs and blackberry, which had served as the wood heap, there was now a neat lean-to stacked to its roofline with sawn, chopped and size-graded fuel to feed the open fire on frosty winter evenings. A regularly slashed path through the horehound led from this shelter to the rear entrance of the homestead garden. When he was not working, the stockman would often sit for hours on the bank of the creek and simply watch the clear water flowing past. The creek lay at the bottom of deep precipitous banks and, although the homestead was not more than fifty metres from it, the water could not be seen from the verandah. The water's edge was an especially pleasant place on a hot day. Overhung by the great branches of the river gums and below the level of the heated plain the clear stream contained numerous fish: perch, silver and black bream, and great slimy catfish which were nevertheless good to eat. Many species of birds lived near the surface of the water and others visited it daily. Once a watchful python eased its olive coils through the creamy branches of the overhanging paperbarks nearby.

The stockman would sit here by the water while the setting summer sun flared overhead, until he was called to the evening meal. Being the only full-time hired hand on the place he took his meals with the family. On these occasions he was silent unless questioned directly and he never attempted to share his thoughts with them. At first they teased him about his shyness but soon recognised that it was something more than this. There was a closed solitariness about him that was not natural in a young man. He brought this solitariness with him. It was deeper than theirsâit had nothing to do with geographyâand they hadn't expected it. Robert Crofts was also very beautiful. His body was strong and well-muscled, he was slim and upright and his movements were finely coordinated. His rather Germanic features were slightly elongated and his lips were full and red. In the expression of his eyes, which were a deep and luminous brown, there seemed forever to be an observation on his surroundings that he could not be brought to utter.

His beauty and his aloofness disturbed the equilibrium of the Rankin family. His arrival was an event of some moment on this lonely station and each of the family in their own way sought to draw him to their particular worldâwith the exception of the young boy, Alistair, who stood determinedly apart from the newcomer from the very beginning. Without ever actively opposing them, indeed often acquiescing in whatever they might suggest, the stockman nevertheless for a long time offered a resistance to the efforts of the members of the family to involve him in their livesâhis shield was his calm politeness. He moved about in their familiar world, observing it with unfamiliar eyes; and quietly, industriously he slowly rearranged it.

At fifty-six Ward Rankin, the owner and manager of the station, was a disappointed man and was easily aroused to extremes of irritation and evenâespecially in his dealings with the animalsâto outbursts of violence. But he was not predictable in this and could be gracious, even charming, so that his family treated him with caution, forever hoping for the best. He stayed indoors as much as possible and loathed the work of the station, doing the minimum needed to keep the place going. He was a short brittle man, nervous, well-read, priding himself on his civilised habits. An only son, for many years he had managed the property for his aged mother. It was not what he had intended for himself. He had wished to travel and to study in the old centres of European learning, but when his father died there had been no one else to take care of the station and, as it was his patrimony, Rankin had stayed, putting off his plans one year after another. He was forty-one by the time his mother died. A year or two before this he had married Ida Sturgiss, a girl from a neighbouring station who had volunteered to help out. She was eighteen. A few months later their first child, Janet, was born. Eighteen months after Janet came Alistair. Ward Rankin never got away from the station and with time he grew to resent the circumstances that bound him to it.

During the past few months he had come to view the hardworking efficiency of Robert Crofts with increasing irritation and hardly ever let an opportunity go by without offering a disparaging comment on it. When Crofts had been on the station for six months and his latest self-imposed task was to clean up the generations of accumulated rubbish at the horseshoeing area, Ward Rankin said to himâwithout any preamble, so that the children around the dinner table looked at their father in fearââIf you must do something useful why don't you shoot Julia's bloody foal!' And with that he got up and left the dining room.

A thin haze of mist from the creek hung in the still air among the dark lime trees when Robert Crofts emerged next morning from the bare fibro hut that was his living quarters. He carried the high-powered .303 rifle used for shooting brumbies. He walked past the silent dogs chained to their trees and went into the machinery shed. The house too was silent, its occupants asleep. In the windless quiet of the dawn hour the sound of the creek could be heard. Inside the shed the stockman clamped bullets in the bench-vice and carefully sawed their points off so that they would flatten on impact and cause a maximum of damage to the target. This practice had been ordered by Rankinâwho was strangely frugal in such mattersâand who would be scathing in his reaction if the stockman were to use more than one bullet to accomplish his task. Rankin's severe attitude seemed to act as a challenge to the stockman, goading him to strive for perfection in everything he did. His one objective appeared to be to serve Rankin diligently. Riding the night horse and with the rifle slung over his shoulder he went slowly through the early morning towards the horse paddock where he hoped to find the mare, Julia, and her foal. The mare was Rankin's most useful stockhorse but had been rendered temporarily useless through getting into foal by a brumby stallion that had jumped the horse paddock fence almost a year sinceâan intrusion only made possible by the poorly maintained state of the fence.

A few hundred metres beyond the homestead Crofts reached the edge of the lime trees and emerged onto the perimeter of a grassy plain from which the station's setting could be viewed. Beyond the plain, almost entirely encircling the valley and more than five kilometres distant, basalt-topped ranges rose into the pink dawn from the dark mantle of an ironbark forest. They were like the ramparts of an ancient city, their silent fortress walls scarred with countless deep ravines, weathered into stranger shapes than anyone would invent.

The Reaper Virus by Nathan Barnes
The Fleet by John Davis
Shoveling Smoke by Austin Davis
Whispers by Rosie Goodwin
Stony Creek Hero [Stony Creek 2] (Siren Publishing Classic) by Taylor Berke
Live by Night by Dennis Lehane
Dawn of Wolves (The Kingdom of Mercia) by Jayne Castel
The Tamarind Seed by Evelyn Anthony
The Dragon of Avalon by T. A. Barron
The Man in the Monster by Martha Elliott