Watching the Wilsons (Carrie & The Wilsons) 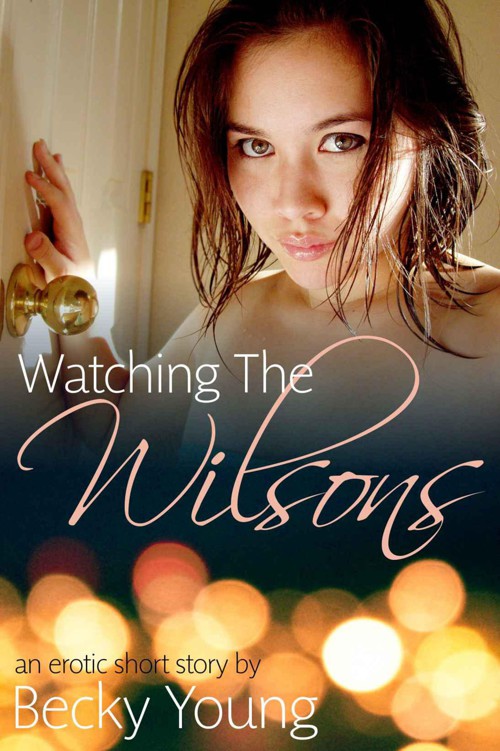 Letter
to
My
Readers

Preview
of
A
Week
With
the
Wilsons

The
softest of snores vibrated the couch cushions behind me. Ella had fallen asleep. I stretched across the ottoman and poked Leo with my big toe. “Okay, dude, it’s time for bed.”

“
After this show,” the ten year old murmured, his gaze never leaving the big screen TV on the wall.

I
rolled my eyes and tugged his sister forward on the couch.

“
Come on, honey, let’s get you to your room,” I whispered, hefting her up and over my shoulder. She was almost too big for me to carry. Leo would be for sure. Another year or two and they wouldn’t even need a babysitter, they could just fall asleep on the couch and their parents could leave them there, or move them when they got home.

The
Wilsons hadn’t planned on having a babysitter this week. They invited me along more to give my parents a break than anything else. I probably should feel guilty about that, but driving to Florida with my folks or spending a week skiing with Mrs. Wilson and her family? No-brainer. I didn’t understand why she was so nice to me after my mom bitched to her about my brattiness, but that was just her personality. Soft and gentle, through and through. I used to think that I wanted to be just like Ellen Wilson when I grew up. Now that being a grown up was right around the corner, I wasn’t so sure. Being Mrs. Wilson seemed like a lot of hard work with no reward. Unless having an adoring husband counted.

My
lips twitched. I could just imagine how Mr. Wilson rewarded his wife. I had, many times in fact. A few times so far on this trip.

Ella
snuggled under her covers and I headed back to the living room. “Leo...”

I
ruffled his floppy blond hair as I passed behind the couch he was still slouched on. “Snowboarders need their rest, you know what your dad says.”

He
turned his head, making sure I could see his eye roll, but thirty seconds later he turned off the television and made a big show of yawning. Whatever. He could think he was going to bed on his own terms, as long as he went. This was probably the only night of real babysitting I would do this week, I wasn’t going to mess it up.

Besides
, the sooner the kids went to bed, the sooner I could explore the box of dirty books in the hall closet.

It
was labelled “Old Books from Stacey”. There were some thrillers on top, and quite a few romances with Fabio on the cover, but the majority of the well-worn paperbacks were explicit erotica. I discovered them earlier in the evening, when I was looking for a board game to play with the kids. I’d only had a few minutes to flip through, but one cover had a woman gagged and blindfolded, and another featured a young woman in a plaid skirt.

I
lost my virginity four months, five days and two guys ago, and I still didn’t get the big deal about sex. I mean, when I touched myself, holy shit that felt good, and I liked the build up. Making out was awesome, but then something happened when fingers touched hidden places. Lack of experience times two was not a great formula for success.

Short
of actually watching real people have sex, these books seemed like the closest thing I would get to a useful lesson in making sex good. Being able to give big Justin Richleau from the football team some direction? That got my juices pumping. Literally. I pressed my legs together and, hand to God, I heard a squish.

I
’d give Leo fifteen minutes to drift off, then I was busting out the box.

It didn’t take me long to choose two books. I carefully took the contents of the box out in layers, taking a quick snapshot with my phone so I could put them back as I found them. Tame romances and dark mysteries gave way to bodice rippers, then the covers got downright raunchy and the titles made me blush. The best stuff was toward the bottom. I glommed on to the novel with the schoolgirl on the cover, and I also selected a collection of seduction stories by different authors. The more information, the better.

The
absence of my pilfered treasure didn’t affect the look of the restocked box at all, so I returned it to its place in the closet, confident my looting would remain a secret, and dashed to my room.

The
schoolgirl book wasn’t what I’d expected. Instead of a senior high school student like myself, it was about a graduate student who discovered that her advisor has a schoolgirl fetish, and she dresses up in a Catholic uniform to entice him, but also to save him from himself--she acted out of love, even if it was doomed. That motivation added a layer of complexity to the story that made something in my tummy flicker. Like I wanted it to work out for her, wanted her to have a happy ending.

I
squirmed on my tummy as she locked the office door behind her and sank to her knees in front of him. My blow job experience so far consisted of licking Justin’s cock like a lollipop, which he liked, but left me a bit underwhelmed. The next time, he hadn’t had a shower and asked me not to go down on him. That left me
really
underwhelmed.

In
the book, the schoolgirl was wet, sopping wet, at the idea of the professor
fucking her mouth
. Her words, and as I read them, my pussy clenched involuntarily. I wanted him to do that.

I
bit my lip. What would that feel like? Justin’s fat knob sliding over my lips and back into my throat, his hands pressing my jaw open, his balls slapping against my chin. My hips jerked into the mattress and I flipped to my back, needing room to slide my hand into my panties.

It
was awkward to hold the book above my hand, on an angle that still captured the bedside lamp, and try to flip the page with my thumb, but my other hand was thrumming my clit toward a speedy orgasm. I was slick, and with each swirling pass of my fingers over the entrance of my spasming pussy, I added more lubrication to the sticky mess around my hot, pulsing nub.

My
orgasm hovered just out of reach as the professor rammed his cock down the schoolgirl’s throat, spurting his hot spunk down her throat. My fingers slipped over my too wet clit, my sex so sloppy with excitement that my usual getting off tricks weren’t working. I dipped my hand lower, grinding the heel of my palm against the top of my mound, fucking my swollen pussy now with two fingers.
“Such a good little cocksucker,”
the professor praised, stroking his student’s face, and as his cock slipped out of her mouth, leaving a trail of dribbling cum down her chin, blood surged to my head and my groin at the same time. I tumbled over the edge, seizing in orgasm, and then collapsed in a boneless pile, my pussy clenching hard against my fingers, pulsing even more wetness into my palm.

I
blinked hard, white spots dancing around the edges of my vision. Holy shit. I was adding
have my face fucked
to my bucket list. And I was only forty pages into the story.

After
I dragged a breath deep into my lungs I flipped over once again, eager to sink further into the story. My eyes were scratchy with fatigue but if I needed to prop my eyelids open with toothpicks to get to the next sex scene, then that’s what I would do.

A
small chime sounded from my phone. I glanced at the text message from Mrs. Wilson.
Kids go 2 bed ok?
I smiled and typed back that they did indeed, and that I was also tucked in. A minute later came her response.
Sleep tight! We might stay out late.

Knowing
that I wouldn’t be caught all mussed up and smelling like sex, I leapt out of bed and padded to the kitchen for a glass of water. Playing with myself was seriously dehydrating. I giggled at the thought and refilled my glass to take back to bed. I would likely need another top up.

The
next scene featured a butt plug, which I wasn’t sure would make my bucket list, although reading about it was hot. No way was Justin Richleau gaining entrance to my ass. Maybe an older man, my version of the professor. I licked my lips at the thought of someone experienced prepping my puckered hole to be fucked. Someone with patience. Someone in control.

Mr
. Wilson’s face flickered through my mind and I gasped out loud. Mrs. Wilson was built like a brick shithouse and obviously I’d thought of her when I played with myself, wishing that I had her sexual ease. Wanting to be her. But her husband?

A
slow smile crept across my face. Yeah, maybe her husband was fuckable too. No, not maybe. Definitely. Fuck.a.ble. He was big, like Justin. I liked that heavy weight pressing down on me. I shivered. Mr. Wilson on top of me, his hand between us. I squeezed my eyes shut and humped my hips toward my hand, my palm slipping and sliding as I acted as both of us. Somehow this fantasy was more taboo than the many times I’d come thinking about lying next to Mrs. Wilson, touching her as her cool fingers explored my breasts and pussy.

That
thought pushed me into spasm again, but I missed the peak of the orgasm, and instead of racing for it, I kept my eyes closed and drifted on the rolling wave. As the sensation ebbed, my body seeming to be covered in a million pulse points all of a sudden, I tucked the books under the pillow beside me and turned off the lamp. My pussy needed a break, and frankly, so did my brain. Mr. Wilson? What was I thinking?

T
wo orgasms knocked me out like a sleeping pill, but without the eight hour guarantee. I woke up with a start, my bladder about to explode. Enough time had passed that it was a pressing concern that I had fallen asleep without doing any of my normal bedtime routine. Besides needing to pee, my mouth tasted like a frog had crawled in and died, and I could stand to wash my face. I fumbled for my phone in the dark, my fingers glancing off it twice before they coordinated properly. It felt like the middle of the night, but the too bright screen promised me it was still an hour before midnight.

I
crept out of bed and headed for the bathroom. As I flicked on the light, I heard Leo stir, and I stuck my head back into the hallway.

The
condo was quiet. The Wilsons hadn’t returned yet.

No
reason to wake up the kids with running water. I grabbed my toiletry bag and padded silently across the living room to the powder room down the opposite hall. The living room had thick plush carpeting, so I didn’t need to be too careful about my movements.