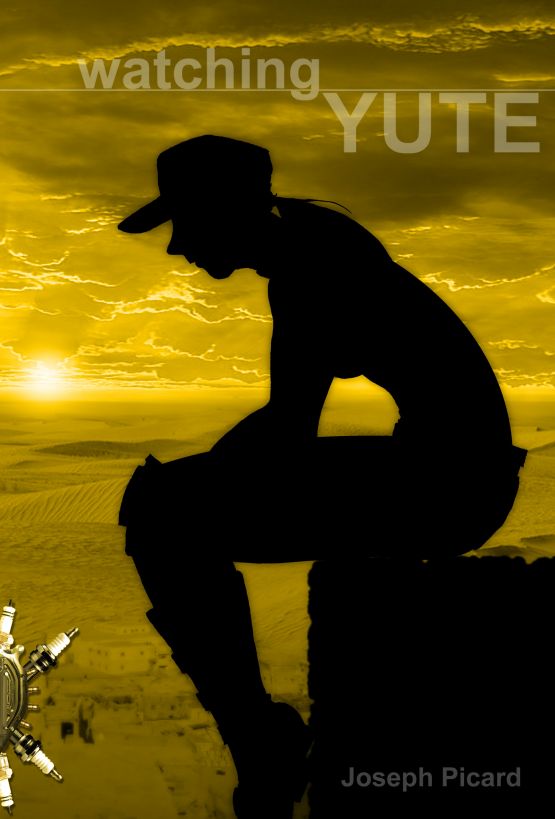 Leftenent Cassidy Stanton just wanted a new start after her girlfriend dumped her. At her new desert post, she didn't look for a new love, but it found her. Unfortunately a microscopic invader and men with dark agendas result in a devastating loss, and send Cassidy into a downward spiral, armed prerogative over life and death.

Born in 1976, Joseph has live all around Canada, now settled in the Vancouver area. In 2001, he was struck by a car, leaving him in a wheelchair. Since then, he's focused on writing, and his daughter Caitlin, born 2007, and son Lachlan, born 2011.

Also from Joseph Picard,
Watching Yute's predecessor, 'Lifehack', available at
Smashwords.com or in printed formats through the author's
site,
ozero.ca

This ebook is licensed for
your personal enjoyment only. This ebook may not be re-sold or
given away to other people. If you would like to share this book
with another person, please purchase an additional copy for each
person you share it with. If you’re reading this book and did not
purchase it, or it was not purchased for your use only, then you
should return to Smashwords.com and purchase your own copy. Thank
you for respecting the hard work of this author. All rights
reserved, including the right to reproduce this book or portions
thereof in any form whatsoever.

Watching Yute began as an examination
of what went right in Lifehack, and what could have been done in
better ways. Since the reckoning of the basic concepts behind
Lifehack, a lot of time has passed to give me perspective. Thanks
also to the volunteer editing team: Gill Picard (dad) Dolores
Picard, (mum) Adam Zilliax (Proud geek) and Meggin Dueckman
(Crouton). Each made valuable, unique contributions.

As well, I write this forward on the
eve of the tenth anniversary of the death of Cheryl N. Her suicide
affected myself and many others in ways that she wasn't able to
foresee.

This book is dedicated to
Cheryl.

If only she had realized how many
people loved her.

Contents of this novel are spelt
primarily using the Queen's English.

Why? Because the small continent nation
of Aguola is a commonwealth of England, that's why.

Sergeant Eliot Hood sat at the bar.
Technically, he was on duty, but he was only waiting for his C.O.,
Major Marcus Douglas, to finish up whatever they were here to do
before heading back to their own base.

He ordered a beer, and looked up at the
football game playing on the nearest terminal. Patriotism made him
root for team Aguola, but he didn’t think they had half a chance at
the World Cup this time around. Still, there were worse teams to
get creamed by than the Scots.

This bar was offsite from Yute central
base, but it was close enough that the clientèle were mostly off
duty military. The handful of civilians that came here were
generally professional ladies, who were tolerated as long as they
were discrete.

When Eliot was about half way through
his beer, a man sat on the stool next to him. Obvious civilian. He
wasn’t in good enough shape to be a soldier. Eliot wasn’t in any
position to throw stones, mind you, but at Eliot’s steadily
advancing age, no one minded if he got a little soft around the
edges.

The civilian man quietly watched the
game until the commercial. A preview of tonight’s news came
on.

“
Good evening.” A stately
anchorwoman began, “Tonight we’ll be reflecting on the upcoming one
year anniversary of the Autar City disaster. We will be remembering
the victims, heroes, and the vigilant men and women who still
maintain the quarantine. That’s tonight at eleven, followed by all
the latest on the World Cup.” The anchorwoman disappeared under a
flurry of network graphics and logos before the terminal flipped to
a beer ad.

“
A year.” Eliot muttered
under his breath.

The civilian nodded. “Fucked up, huh?
Maybe this year the ground will crack open, and a giant Abraham
Lincoln will attack the City of Meston.”

“
I doubt it,” Eliot said
without looking away from the terminal. “Lincoln is a yank, he’d
attack DC or something.”

The civilian turned his body to face
Eliot as he put a small plastic container on the bar. “Uh, mister,”
he said, “The guy over there told me you’re posted at the temple
base…”

“
Yeah? And?” Eliot scarcely
looked away from his beer.

The civilian tapped the plastic
container on the bar twice softly. “Well, my mum passed on not long
ago, and she always wanted to see the statue. Her mum told her
about it, and she always thought it was something she’d love to
see, on account of her heritage, but of course no one’s allowed
there besides the temple guards.”

Eliot looked the civilian up and down.
“Either you’re adopted, or you’re the whitest Aguei I’ve ever
seen.” The nation of Aguola had always been home to the aboriginal
'Aguei' people. Everyone else were considered “Northers”, as
descendants of settlers.

The civilian smirked. “Yeah, I was
adopted. At any rate, this is a bit of her ashes, and I’ve heard
some people have had a portion of their ashes sprinkled in front of
the statue, and I was wondering…”

The civilian nodded slowly. “I know.
But I’ve come all this way, and I promised, and.. don’t make me
insult you by trying to bri-“

Eliot leaned forward slowly but
aggressively, to draw attention away from his hand discretely
covering the plastic container. He winked. “Listen buddy, I’m not
for sale, and the temple isn’t your personal ashtray. Scram,
alright?”

The civilian watched Eliot’s hand
smoothly stuff the container into a thigh pocket. “Ah, yes, well,
of course, I see. Thank you for your time anyway, Sir.” He then
pulled out his wallet, and reached out to leave a moderate sum of
money on the bar next to Eliot. Eliot blocked the civilian’s reach
before the money got close to the bar. He chuckled quietly. “I said
I can’t be bought kid, I meant that. Now scram.”

The civilian nodded. “Thank you,
Sir.”

In the following year, the disaster of
Autar also claimed the city of Meston. A man named Jonathan Coll
was found to be responsible for both events.

His tools were nanites, experimental
microscopic robots capable of a wide variety of functions,
including producing more nanites, and infesting a human
body.

Coll died, and his actions were halted,
but not before millions died, and two cities were lost. Due to the
severity of the “Erebus incident”, the government of Aguola and
many other counties of the world rushed to ban nanite
development.

One year after the Erebus
incident.

Yute central base was textbook
government issue all around. Lots of concrete, flat and grey, with
the occasional stenciled paint for directions. It quite lacked any
character. He found it odd that they called it “Yute central”, as
he felt that the temple in the adjoining Yute desert was the
rightful centre. It didn't truly matter. Sometimes Northers name
things in accordance to their own whim, regardless of
reality.

The softness of night at least took the
edge off of the unwelcoming structures surrounding him. The distant
sounds of boisterous off duty personnel also added a slight coat of
humanity, although Marcus was quite content to enjoy such
jocularity at a distance.

Obviously he came here as seldom as
possible, but some things were best done in person. Diplomacy was
in order when making requests to a new commanding officer that he
hadn't even met yet. However it was late, and it would wait for the
morning. During the helicopter flight in, he arranged for quarters
for the night and was granted the VIP room.

He should have asked where it was. He
thought he knew where it was, but since the last time he had been
here, the area the VIP room used to be in was now a mess hall. If
he was the kind to carry a mini terminal this would be easy, but as
it happened, Marcus wasn't especially attached to little fidgety
electronics. Maybe he should while doing business around
here.

He hadn't noticed at first, but the
distant jocularity had suffered a quick turn to discord. A boiling
up of shouting was punctuated by a single shot being
fired.

That, he did notice.

He began to run towards the sound with
the intent to cautiously investigate, but before he got far, two
M.P.s exploded past him and vanished around the corner. He did his
best to keep pace behind them, but the young man and woman were
younger and fitter than Marcus.

They passed a soldier who pointed them
in the direction of the continuing shouts, as if the way wasn't
obvious.

The female M.P., a lean, tough looking
blonde with a ponytail sticking out the back of her regulation
desert cammo cap, stopped short at a corner. She held her hand out
to signal her partner to stop. Marcus stopped as well, hanging back
to watch.

Seconds later an out of breath soldier
with a 9mm handgun stumbled around the corner. The woman was on him
instantly, grabbing his wrist and slamming it against the wall. The
gun dropped to the ground while the male M.P. drew his
weapon.

The freshly disarmed (and drunken)
soldier started running back the way he came. The female M.P. waved
her partner's aim down, and called out to the runner.

"Oh, please!" She picked up the gun he
dropped, dumped the clip, and unloaded the chamber. "M.P.! Freeze!
I’ve got a gun!" There was no need to mention that it was
empty.

The runner kept going, staggering all
the way. The female M.P. threw the gun at his head, and the impact
put him on his face. He was still conscious, but quite disoriented.
Why did his head now hurt, and how did he get on the
ground?

"I told ya I had a gun." Both M.P.s
walked over to him, restrained him with a zip tie, got him on his
feet, and arrested him.

The female M.P. turned her head to look
back at Marcus. "Just a rowdy drunk, business as usual."

"So you regularly deal with armed
drunks who could have easily shot you, arrest them without injury,
and without the use of a sidearm?"

Marcus furrowed his brow. "Many would
say you took an unnecessary risk. Can I have your name?"

The female M.P. flinched a little.
"Sir. Leftenent Cassidy Stanton, Sir." Marcus scribbled the name
down on a little pad he pulled from a breast pocket. Cassidy paused
to look at Marcus. He had the kind of face that told you he was an
even-tempered sort, but there was something in his eyes that just
looked a little out of place.

El camino del guerrero by Chris Bradford
Connecting Rooms by Jayne Ann Krentz
Addie and the King of Hearts by Gail Rock
Embattled SEAL by J. M. Madden
Scandal by Patsy Brookshire
Julia London by Wicked Angel The Devil's Love
How to Write Really Badly by Anne Fine
The Adventures and Memoirs of Sherlock Holmes by Arthur Conan Doyle
The Most Beautiful Woman in the World by Ellis Amburn
All's Fair in Love and Lion by Bethany Averie