Read We Sled With Dragons Online

We Sled With Dragons 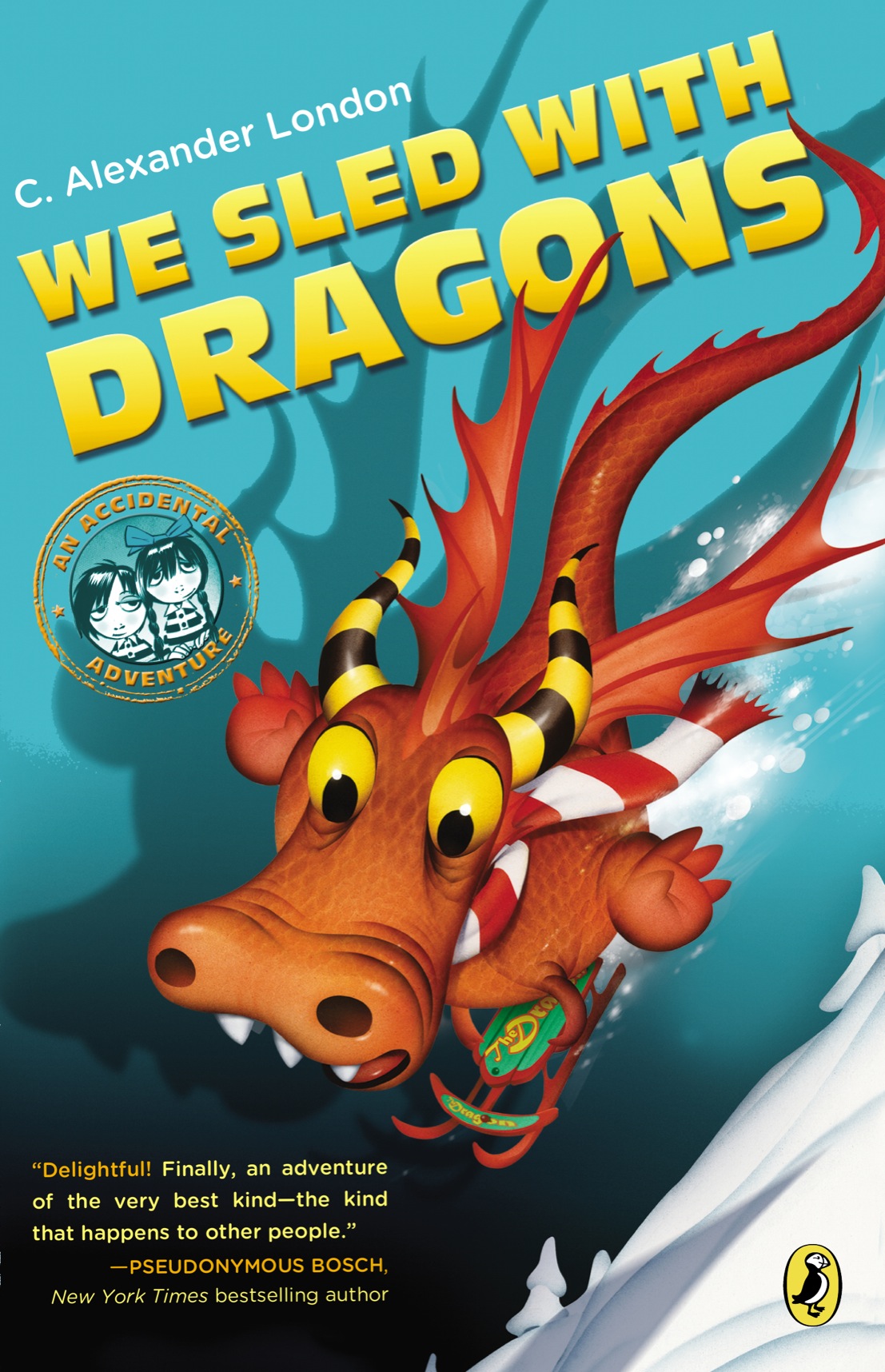 “Bad news, guys!” Their father walked down the aisle toward them. “We can't land in Svalbard because there's too much ice on the runwayÂ .Â .Â . so we're going to have to jump out of the plane!”

Celia turned to her brother. “You totally jinxed us,” she said.

“What? How did I do that?” Oliver replied.

“That's not the rule,” said Celia.

“But this isn't TV,” said his father.

“The rules are the same,” he said.

“If you say so,” Dr. Navel said. “When I was your age, we had these crazy things called books.”

“When you were our age, did your parents make you jump out of an airplane?” Oliver asked.

“I guess so.” Celia scowled. 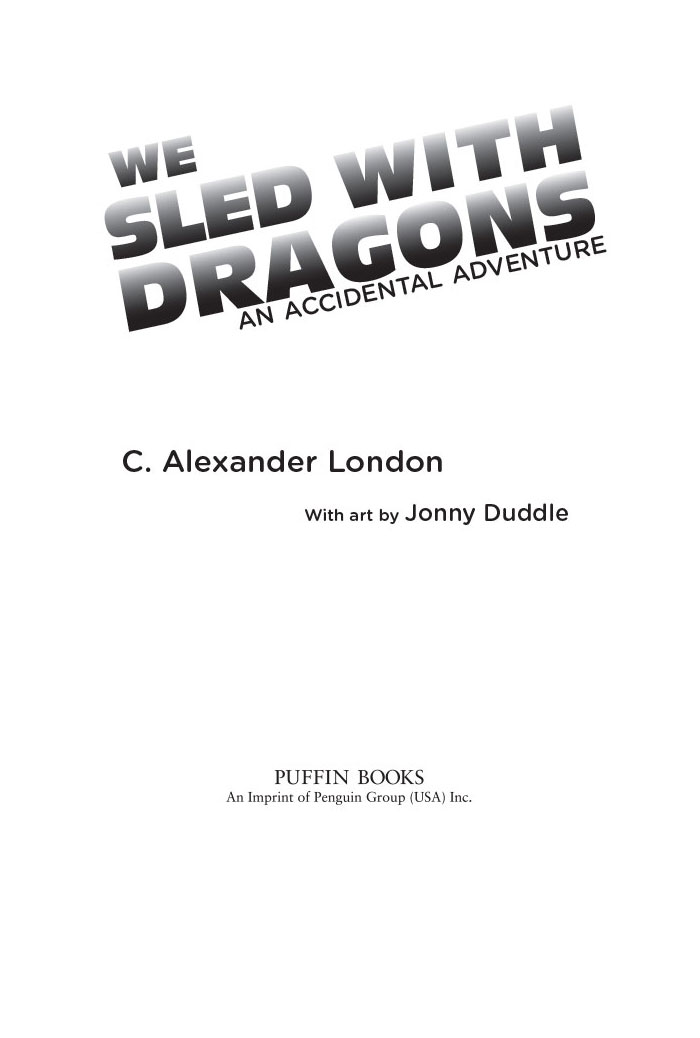 For more information about the Penguin Group visit www.penguin.com

LIBRARY OF CONGRESS CATALOGING-IN-PUBLICATION DATA IS AVAILABLE UPON REQUEST

For my own Indiana Jones
and our adventures yet to come

5. WE MAKE A LONG STORY SHORT

7. WE'RE PRIVY TO THE PROPHECY

24. WE SLEEP WITH WALRUSES

27. WE BEAR THE UNBEARABLE

34. WE THINK DRAGONS ARE A DRAG

A FINAL NOTE FROM THE AUTHOR

1
WE PLAN THE PLAN 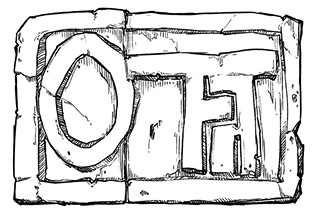 “WHOSE BOOTY?” OLIVER
Navel asked for the third time, as their small boat bobbed gently on the waves and lights twinkled on the shore.

“It's no one's booty!” His twin sister, Celia, groaned at him. “It's Djibouti! It's the name of the city.
Jib-boot-tee!
Djibouti.”

Their parents, Dr. Claire Navel and Dr. Ogden Navel, ducked out of the way of Celia's flailing arms and steadied themselves on the sides of the boat. They were world-famous adventurers and the Explorers-in-Residence at the Explorers Club in New York City, and they had learned a few things in their travels, such as how to dodge a wild boar attack and how to escape a hive of enraged killer bees. They found the same tactic came in handy when dealing with their eleven-and-a-half-year-old twins: get out of the way as quickly as possible.

Oliver fell off his narrow bench, laughing at his sister. He splashed into a puddle in the shallow hull of the boat, but he was laughing too hard to care.

He knew, of course, that Djibouti was the city whose lights were twinkling on the shore a short distance away on the coast of North Africa. He'd seen at least five episodes of his favorite spy TV show,
Agent Zero,
that were set in Djibouti.

He probably knew more about Djibouti than Celia did. He just liked hearing his sister yell it over and over again.

“What is
so
funny about Djibouti?” Celia demanded. Oliver snickered and pulled himself back up onto his bench.

Brothers can be so immature, she thought. She was three minutes and forty-two seconds older than Oliver, but sometimes it seemed like she was three years older. Oliver was giggling like an idiot just because Djibouti sounded like “booty.” She noticed her father was smirking too.

Celia looked at her mother and rolled her eyes. Boys never grew up.

“It's just the city's name.” She blew a strand of hair out of her face. ”Djibouti.”

Oliver was turning purple, doubled over, long past the point when laughing was fun but unable to stop. We all certainly know the feeling, which usually occurs at the least opportune moment, such as during study hall or when a famed astronomer is giving a lecture on the ice mountains of Uranus.

“Oliver, calm down,” Dr. Claire Navel, Oliver and Celia's mother, said. She grabbed Oliver by the back of his T-shirt to keep him from laughing himself over the edge of the boat. “And Celia, stop harassing your brother.”

“He asked for it,” said Celia.

“Be that as it may”âtheir mother looked from Celia to Oliver and back againâ“there is nothing funny about Djibouti.”

Their father snickered, but his wife shot him a glance that could have melted the ice mountains on Uranus. He fixed his face into a serious expression and stayed silent.

“The city is a den of pirates, thieves, and tourists,” their mother continued. “Who knows what they're doing to poor Corey Brandt in there?”

Dennis was a chicken. Technically, being a male chicken, he was a rooster, but we don't really need to be so persnickety, do we?

The important thing to know about Dennis is that he was a chicken who had proven himself intelligent and heroic, in spite of having once served as bird-in-residence aboard a pirate ship. He had belonged to the captain, a ferocious rogue named Big Bart, but Bonnie, another pirate on Big Bart's crew, took Dennis the chicken prisoner at the same time that she kidnapped Corey Brandt.

Corey Brandt, we should note, was not a chicken. He was an actor. He had, however, once dressed as a chicken for a discount mattress commercial. That was a long time ago, and he doesn't like to talk about it.

Currently, Corey Brandt was the most famous teenager in the world, star of hit television shows like
Agent Zero, The Celebrity Adventurist,
and the groundbreaking teen vampire drama
Sunset High.
He wasn't yet eighteen years old, but he earned more money in a day sitting in his trailer wearing vampire fangs than the entire population of Djibouti earned in a year.

It was no wonder pirates were holding him for ransom.

Corey was also Oliver and Celia's best friend in the world, like a cool older brother, and he had been kidnapped while trying to reunite the twins with their parents and find a map to the lost city of Atlantis. The Navels were happy to be reunited. It had been years since they had all been together, but they hadn't been able to keep the map to Atlantis from falling into the hands of an evil explorer or keep Corey from falling into the hands of a vicious pirate.

It had taken weeks to track the pirates from the Pacific Ocean, through the Strait of Malacca, across the Bay of Bengal, along the Kerala coast of India, and now across the Arabian Sea to Djibouti, and the twins were not only missing most of sixth grade, which they didn't mind one bit, they were also missing the season finales of all their favorite TV shows, which they minded quite a lot.

“Are you sure this plan will work?” Celia asked her mother. “Because I'm missing the last episode of
Celebrity Fashion Crimes.
”

“And
Bizarro Bandits,
” the twins said together.

They were missing a lot of television.

“We'll get you home soon,” their mother told them with a sigh. She couldn't understand why they'd rather watch TV than plan a raid on a pirate stronghold in Djibouti. “The Prague Proposition is foolproof.”

“Bwahâ” Oliver started to laugh, but Celia scowled at him. He clamped his hands over his mouth. Dr. Ogden Navel let out one high-pitched giggle.

“I've adapted the plan for this city,” their mother said.

“So why not call it something else?” Oliver suggested. “Like the Djibouti Jinx?”

“Oh, that's good, Ollie! You're thinking like a real explorer now!” His mother licked her thumb and tried to press Oliver's stray hair flat against his head. He flinched and ducked away but couldn't help smirking just a little. He'd never admit it, but he liked that he'd impressed his mother.

“What'll happen to Corey if the Djbouâ” Celia glanced at Oliver. “If the plan doesn't work?”

“You worry too much,” she said. “The PragueâI mean, the Djibouti Jinx will work.”

“It better.” Celia glanced across the water at the city, which stuck out into the Gulf of Aden like a stray hair on Africa's head. “Or else we'll have missed all our shows for nothing.”

“Trust me,” their mother said, smiling at her family. She grabbed her husband's hand and squeezed it. “We're all together again. Nothing can possibly go wrong.”

Arcadia (Book 1): Damn The Dead by Tomasso, Phillip
Scratch by Brian Keene
Black May by Michael Gannon
Bear No Loss by Anya Nowlan
Spy Mom by Beth McMullen
Nanny Piggins and the Runaway Lion by R. A. Spratt
FIERCED 1: A Stepbrother Romance by Stephanie Brother
Double Image by David Morrell
Guardians of the Boundary (The Conjurors Series Book 3) by Kristen Pham
Baby Blues and Wedding Shoes by Amanda Martin