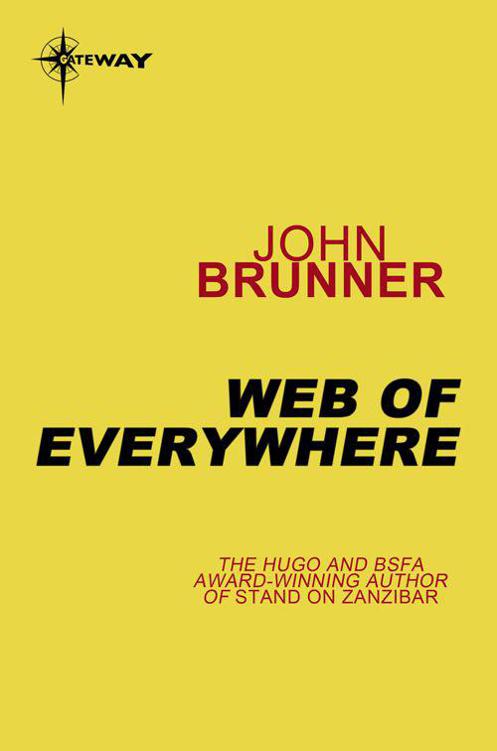 In the last years of the twentieth century (as Wells might have put it), Gollancz, Britain's oldest and most distinguished science fiction imprint, created the SF and Fantasy Masterworks series. Dedicated to re-publishing the English language's finest works of SF and Fantasy, most of which were languishing out of print at the time, they were – and remain – landmark lists, consummately fulfilling the original mission statement:

‘SF MASTERWORKS is a library of the greatest SF ever written, chosen with the help of today's leading SF writers and editors. These books show that genuinely innovative SF is as exciting today as when it was first written.’

Blinded by the dark

Has ceased her spinning

And all doors lead to the Minotaur

Thinking, in that instant of chill due as much to the change from excitement to alarm as to the step they’d taken from sub-tropical to sub-arctic, how absurd it was to blurt those words to a blind man. But Mustapha was accustomed to his lack after – how long? Fifteen years, fifty? It was not something one inquired about.

He complied, tautening into that strange state of total attention which, Hans Dykstra had sometimes imagined, could truly halt the passage of his personal time, poise him an arm’s length away from the world experienced by ordinary people while he took exhaustive unseeing stock of it.

That too made Hans shiver, despite his climatized suit.

And then he realized: of course! Cobwebs!

He forced himself to take a deep breath, and fear sub-sided as icy air seeped through his mask. There was no light here, except from the powerful hand-torch he had brought, and the very first thing he had seen when he arrived had been gray fluff-thickened strands barring the exit from the skelter.

Illegal it might be, but one did hear stories now and then about people who couldn’t afford a privateer and rigged
man-traps of their own devising….

‘I sense no one,’ Mustapha said in a voice which was not quite tinged with complaint. The eagerness which drove him had nothing in common with his companion’s – at least none which the latter could recognize. They were collaborators, but they were not and could not be partners. One might say, ‘The enemy of my enemy … ’ And be able to proceed no further with an explanation.

Hans uttered the necessary words, and into the fringe of the lamp beam instantly rose a brown hand child-chubby as Mustapha’s face, groping greedily for the spider’s fragile legacy.

‘Wait, wait!’ Hans implored, thrusting away the blue flower, the speedwell, which of course he had held up before him as he entered the skelter. He hastened through his regular protective charms in his mind, meantime using one hand to sweep the visible portion of the house with his lamp and keeping the other alert to punch a getaway code should someone turn out to be already in possession. Such caution was very likely superfluous; an assurance from Mustapha was worth a dozen instrument readings. But since neither the radiation-counter nor the bio-assay unit had beeped, the place was obviously habitable, and it had been long since one stopped to ask polite questions of strangers who showed up unannounced in a domestic skelter.

‘Wait why?’ Mustapha demanded querulously. ‘Because you can see a warning sign?’

With a sigh Hans abandoned his mental formulae before completion. ‘No,’ was his gruff answer. ‘Because when you touch the webs you’ll break them, and I want to get them down on film first.’

He unslung his camera and flash to record the delicate tracery marred by thickening dust.

‘Keep your hand out of shot,’ he added, eye glued to the viewfinder. ‘Want to get yourself braced?’

‘They will not find your pictures until they’re meant to, after you’re dead. So at least you originally promised me.’

‘I could be dead, but you could still be alive,’ Hans grunted, and wound the film on. ‘Good, two will be enough. Go ahead.’

Plump fingers, with the slyness of a stalking fox, moved in air and located a web-strand, traced along it musician-precise without breaking it; found another; broke both in a deliberate gesture and savored the sensation of contact. Hans had witnessed him performing similar marvels before, but this was the most amazing. To
stroke
the full length of that spider-silk and leave it intact until the moment of his decision to snap it: such abilities sometimes made Mustapha seem inhuman. Men rush in where angels …

But there was no room in his mind right now for reflection, only for reaction. This time, no doubt about it, Mustapha had done him proud. He’d guessed from the form of the code he had bought that it was exceptionally early, and had dared to hope it might lie in the first million. On site, he was immediately ready to believe they’d located one of the first hundred thousand … assuming that this was Scandinavia, and everything pointed to it. The air was certainly cold enough, and facing him across the living-zone were big windows, absolutely black, silent witnesses of a far-northern night.

‘Oh, wow,’ he said under his breath. The phrase was archaic, but English was not his mother tongue, and anyhow if someone had invented a better way to express delighted astonishment he hadn’t heard about it. Under the obliterating dust that floor looked like natural wood parquet; draped with cobwebs, that might be an authentic Hille chair; weren’t those shelves System Cado …?

‘It pleases you?’ Mustapha murmured, his study of the webs complete. At once he had reverted to his regular manner: cool, detached, as though he were a machine programmed to acquire and analyze with maximum concentration all new data that presented themselves, to idle in face of any precedented situation. This was the ninth time he and Hans had come together to a lost home. How his companion obtained the codes to reach them, Hans had no idea and intended never to ask, for fear of being told that they were relying on some ancient ‘little black book’, rather than some burgled bank of computer records, or bribery of a technician at the Skelter Authority.

And the Arab went on, ‘I apologize for being over-ready to touch the webs. But they are so rare now. I had
not felt one since boyhood. I had almost forgotten them. Curious! One would have expected spiders to be tough.’

Yes, perhaps, Hans thought. But infection had come out of Central America – a fungus, or some microscopic parasite – and something kept happening to their eggs…. Well, one would also, at one time, have imagined that humanity was tough.

Aloud he said, ‘I think this strike is the best yet!’

Cozy in his suit, he drew down his mask and inhaled the harsh air with paradoxical enjoyment. It was cruel to the throat, but it tasted infinitely cleaner than what he had left minutes ago, tainted with the open-sewer stench of the Mediterranean and the collective halitosis of Valletta. The dust merely added spice to its tang.

Unencumbered with equipment, Mustapha had walked forward, out of range of the handlamp’s beam, to stand on the level floor and turn, as though on a very slow-revolving potter’s wheel, soaking in the nonvisual information the house could afford him. Once or twice he clapped loudly, cocking his head, mapping walls and doorways and furniture, sniffing the while, memorizing new scents.

Somewhat more slowly, and somewhat enviously (but to envy a man who had been blinded! Crazy!), Hans also emerged from the skelter, hung about with safety devices, camera, flashbar, bag of spare film, lamp, instruments…. It was all gear legitimately come by, but there was nothing legitimate about the use he was at present putting it to.

His profession was that of a recuperator, his duty to share out reclaimed resources around the world to those who were in greatest need of them, or who could exploit them for the general good. It wasn’t the lure of strange places which had enticed him to take up his dangerous and unlawful hobby, for he was routinely instructed to go to every continent as and when a reclaimable cache was reported to the Economics Authority.

No, what fascinated him was the form and pattern of a dead age, in suspended animation now but being gnawed by time so rapidly that unless someone made a record of it less tenuous than memory could provide its relics would have to be reconstructed in ignorance by the archaeologists of the far future.

If there were any.

This particular skelter was indeed one of the very earliest, half a century old and amazingly bulky, as big as a car. He understood that in fact some car parts had been adapted for the first skelters, just as Remington included bits from sewing machines in their original typewriters. So old a model might be developing faults. The thing had delivered them here safely, but would it send them away again? Worst of all: would it take Mustapha away – leaving first, as always, with his own incomprehensible curiosity satisfied – and then maroon him, maroon Hans Dykstra?

For an instant he pictured himself trudging across the snowbound wastes of … What country was this, anyhow? Sweden, Norway, Finland? Most likely Sweden; there was a Volvo plate on the skelter’s crystal-box, rimmed with frost but legible. An almost vacant land, then. The winter population of Sweden was reputed to be down around two or three thousand now, mostly eccentrić recluses, so hunting on foot for help in getting home would be absurd. In the summer, of course, things were different. There might be a million temporary residents by July.

He contemplated the skelter gloomily. Like most people nowadays – or rather, like most privileged people – he could undertake simple routine maintenance on his own model of skelter, the equivalent of changing a car-tire or a tap-washer, but he’d never seen a design this old before. If he were to start making inquiries about service manuals for obsolete Volvo skelters, though, within the day some bland official would track him down to ask what need he had for such data, and he had absolutely no desire to land a bracelet for code-breaking. No, he’d have to put his faith in the high standard of Swedish craftsmanship, take his chance of being disintegrated on the way to or from home, or of being stuck here until summer gave him the chance to mingle with a mass of visitors at a public skelter outlet.

The Alien King and I by Lizzie Lynn Lee
The Landower Legacy by Victoria Holt
Attack of the Mutant Underwear by Tom Birdseye
Can't Look Back (War for Dominance Book 1) by Chris Kennedy
Size Matters by Stephanie Haefner
Diary of a 6th Grade Girl #1: How to Survive Middle School by Claudia Lamadre
Robin in the Hood (Robbin' Hearts Series Book 1) by Diane J. Reed
Zion by Colin Falconer
A Stranger Like You by Elizabeth Brundage
A Part of the Sky by Robert Newton Peck