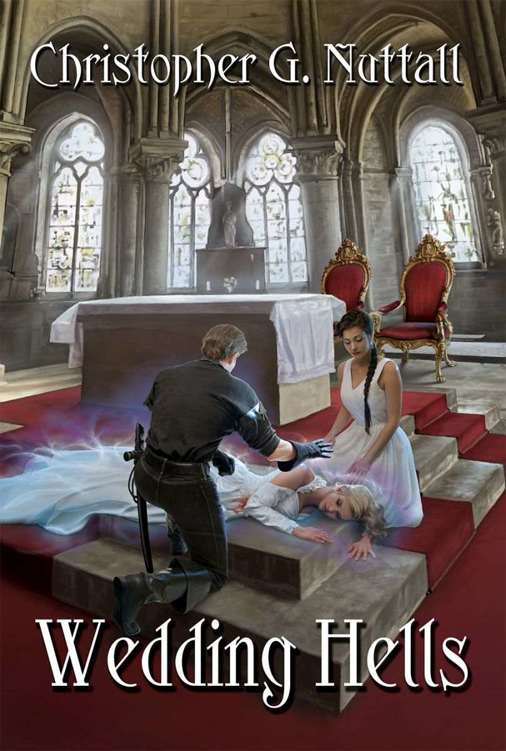 This is a work of fiction. All concepts, characters and events portrayed in this book are used fictitiously and any resemblance to real people or events is purely coincidental.

All rights reserved. No part of this book may be reproduced, stored in a retrieval system or transmitted in any form by any means electronic, mechanical, photocopying, recording or otherwise, except brief extracts for the purpose of review, without the permission of the publisher and copyright owner.

“T
HEY SAY YOU CAN GET A
good view from here,” Rahsia said, from behind him. She sounded grimly amused. “Do you like what you see?”

Gannet ignored her voice, choosing instead to look out the window at the sight below, even though it tore at his soul. Fourteen people - nine men, five women - were positioned in the pillory, surrounded by the City Guard. They’d been arrested only two days ago and slammed into the stockade, without even a pretense of a trial. But then, everyone had known they were guilty of the charges laid against them. They just hadn’t believed that free speech, questioning the nobility, and demanding change
were
crimes.

They won’t last much longer
, he thought, morbidly. One woman - she’d been thirty, if he recalled correctly - was already lolling to one side, her head bruised and battered where pieces of rotten fruit had struck her.
They haven’t had anything to eat or drink since they were chained up in the stocks
.

He clenched his fists in bitter, helpless rage. Five minutes. Five minutes had made the difference between escape and being arrested with the others. If Rahsia hadn’t delayed him with news of potential new allies among the magicians...

I’d be down there too
, he thought.
Trapped, helpless, and surrounded by the people I wanted to save
.

It had all seemed so simple, once upon a time. The New Learning had swept through Zangaria like wildfire, bringing change in its wake. Hundreds of thousands of people could now read, write and do their sums,
without
the aid of a guild. The printing presses had followed, allowing the newly-enlightened population to actually
learn
about the world surrounding them for the first time in their lives. And, with the political ideas emanating from Cockatrice, Gannet had dared to hope they were on the cusp of real lasting change - and freedom.

He knew, without false modesty, that he was smart. He’d been a merchant, after all, and no merchant lasted long without a canny eye for opportunities. But his low birth had doomed him to obscurity. His lack of connections ensured he would never be anything more than a small shopkeeper, beneath the attention of those who called themselves his betters. But why
were
they his betters? What separated an aristocrat from a commoner, beyond an accident of birth? Aristocrats were no more or less moral than commoners, he knew from bitter experience; commoners could show more nobility than some of the so-called noble aristocrats.

Rage - and cold hatred - flared in his heart as he lifted his eyes and stared at Swanhaven Castle, its malignant dark mass looming over the city. Lord Hans and Lady Regina lived there, competing for the favor of King Randor and struggling to win the Barony of Swanhaven for themselves. One of them had issued the orders to crack down hard on the freethinkers, taking his friends into custody and placing them in the stocks to die. Gannet neither knew nor cared which of them had actually issued the orders. If anyone deserved to die, it was the two of them – no one had a good word to say about them. They were both part of a vile and corrupt system that needed to end.

There were stories, hundreds of them, of brave swordsmen who’d fought their way into castles and emerged with the maiden fair, but Gannet knew he was no fighter. Like all commoners, he’d been denied the chance to wield anything more dangerous than a club. It was death for him to own a sword, let alone seek training in its use. And, with the castle surrounded by wards as well as armed guards, even a truly legendary swordsman would be unable to find a way past the defenses and into the keep. There was nothing he could do.

He swung around, suddenly, to glare at Rahsia. “Did you
know
this would happen?”

The dark-haired girl shook her head. She was around twenty, if he was any judge, although magicians were fond of making themselves look younger. She’d introduced herself, when they’d met, as a representative from a handful of magicians who
also
wanted political change. Gannet had been suspicious - magicians were practically noblemen - but she’d done nothing to justify his concerns. Indeed, he’d found her quite pleasant company when they’d talked about other things. She certainly wasn’t one of the young firebrands who talked of nothing but revolution and war - and the paradise that was sure to come, once the aristocrats were dead.

“There was no warning,” she said, softly. “We have no contact with the magicians in the castle.”

Gannet nodded, cursing inwardly as a loud cheer rose up from the square below. Someone had probably thrown a rock and killed one of the prisoners, but he refused to turn and look, knowing that a friend of his might have been killed. If they’d been interrogated first, before being put on display, they might even have betrayed him too - if, of course, his name hadn’t already been given to the soldiers. He knew he didn’t dare go back to his garret.

They won’t have found everyone
, he told himself.
I can rebuild
...

“There’s nothing to be done here,” Rahsia said. She rose from the bed and held out a hand. “We should go.”

“There’s nowhere to go,” Gannet said. It wasn’t quite accurate - a flophouse would be happy to put him up without asking any questions - but for once in his life he didn’t know what to do. “They’ve won.”

“Not yet,” Rahsia said. She gave him a considering look. “The core problem, as you know, is that the lords and ladies are backed by the king.”

Gannet scowled back. “Of course I know,” he snapped. “
Everyone
knows that!”

It was true, too. The peasants might - might - be able to overthrow a village headman, or a minor noble. But the barons - or the king himself - would be sure to respond. Entire villages had been burned to the ground, their populations slaughtered or sold into slavery, just for daring to lift a hand against their lords and masters. It had made the survivors unsurprisingly reluctant to risk taking a stand, even when their betters insisted on taxing the villages so harshly that their mere survival was in doubt. No wonder, Gannet thought, that so many had fled the lands to the towns - or Cockatrice. There was nothing left for them in the countryside.

“Then the problem lies with the king,” Rahsia said. “We should seek to kill him and exterminate his line. And there will never be a better chance.”

“The king,” Gannet repeated. He was a minor merchant, by all the gods; he didn’t even live in Alexis! “You want to assassinate the king?”

“Yes,” Rahsia said, firmly. “And his daughter. The Iron Duke - the
former
Iron Duke - has already been disgraced. With the king and his bratty Crown Princess gone, there will be no legitimate heir to the throne.”

“There are the barons,” Gannet pointed out.

“None of whom have a clear-cut claim,” Rahsia countered. “Those who
did
were killed after the coup attempt in Alexis. The survivors do not have a strong blood-link to the Line of Alexis. There will be civil war if they start disputing who should take the throne.”

Gannet thought, fast. Like all merchants, he did his best to keep abreast of power struggles amongst the aristocracy, even though his ability to affect them was practically nonexistent. The strongest surviving baron was, ironically, the one who was least interested in wielding her power - and, perhaps, the one who would be the best monarch for the country.

“There’s Baroness Cockatrice,” he said. “Would
she
take the throne?”

“I have it on good authority that Lady Emily is not interested in such power,” Rahsia said, dryly. “But even if she were, she’d be challenged by the other barons. They would see her as a more dangerous threat than any other.”

“So there will be civil war,” Gannet said.

“Yes,” Rahsia said. “The social structure that binds the country together will shatter once the king is dead. Aristocrat will turn on aristocrat, which will give
you
the chance to prepare your forces to act. And all you have to do is kill the king and his sole heir.”

Gannet hesitated. King Randor had to go - the man had worked with the commoners to save his throne, then started to marginalize them - but he had no particular dislike of the princess. He’d heard stories, of course, yet they’d all been so inflated by the time they’d reached Swanhaven that he didn’t believe them. And besides, some of the stories about Lady Regina were far worse.

But the death of one young girl was a small price to pay for freedom.

“It won’t be easy,” he said.
That
was an understatement, all right. “How do we even get into the castle?”

Rahsia smiled. “Let me take care of that,” she said. Her confidence surprised him. “We do have allies in Alexis. You just work on rebuilding our network here.”

King Randor, fifth monarch of Zangaria, took the parchment from Lord Nightingale and watched as the aristocratic functionary oozed his way out of the chamber. It galled him to rely on a man who would happily degrade himself completely for a scrap of power and safety, but there was no alternative. Nightingale was loyal because he
had
to be, because there would be no escape for him after his master’s death. The Crown Princess loathed him, the Barons hated him and most of his fellow bottom-feeders regarded him with envy. The only real question would be which one of Nightingale’s enemies would get to him first.

He shook his head tiredly as he felt the wards slip back into place, protecting his privacy from prying eyes. It was impossible to pretend that the kingdom hadn’t changed, that Zangaria wasn’t more unstable than ever. The remaining barons were plotting to regain power - and kept reminding their monarch, none-too-politely, that the other baronies needed to be filled - but they weren’t the real problem. Randor
understood
the barons, understood the driving lust for power, for the prize of kingship, that drove them onwards. He might have beheaded four of them after their attempted coup, but he understood them. They were rats, doing what rats did.