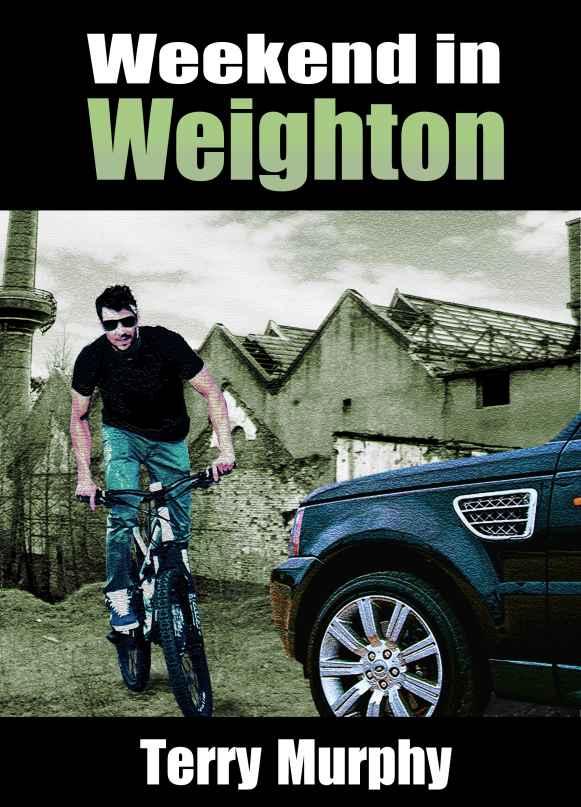 No part of this book may be reproduced or transmitted in any form or by any means, electronic, digital or mechanical, without permission in writing from the copyright owner …

Weighton is fictional, but not too far from where I live!

All characters are entirely fictional.

Any resemblance to anyone living or dead is accidental.

Although I used to know a guy called ‘Diffy’ …

For my lovely mum – she’s much missed …

my dad for everything.

There’s things I remember and things I forget.

I miss you, I guess that I should.

But what would you change if you could?

I need a phone call. Maybe I should buy a new car.

I can always hear a freight train, if I listen real hard.

And I wish it was a small world,

Because I’m lonely for the big towns.

Guess it’s time to put the top down …

The phone call had been a mistake. On the upside it got me a date with the girl I thought I’d never see again, but it gave Tommy time to find me. Whether it was the distraction or the euphoria, I never saw the punch coming.

Struggling for breath, I braced on one knee and blinked up at the stark outline of Weighton’s Town Hall. The building’s neo-gothic façade sparkled unnaturally, like Christmas come early, but it was only tiny stars in my eyes. The twinkling light shifted with my gaze and formed a faint halo around Tommy, the un-saintly presence towering over me. He drew back his fist, eager to get in another punch. It was the second time we’d met and we still hadn’t got to the small talk.

As my head cleared, I weighed up the getaways. Bolton Street, to my left, was a dead end. To my right, the Old Bridge looked busy. A stairway stretched behind me, leading back to the rear of the Town Hall. Tommy had them all but blocked, and I couldn’t count on a town like Weighton for a diversion.

I got to my feet, coughing and gingerly rubbing my ribs. Tommy grinned, clenching and unclenching his club-like fists. The joy of inflicting pain seemed evident on his beaming face.

With one option remaining, I raised a hand like a white flag, placing hope and faith on a temporary ceasefire. I might have beaten the count, but by any account it was a technical K.O. Weighton’s leading thug was leading by a distance.

Tommy stared at my offering, his forehead creasing with a frown. Confused by short words and simple hand signals, he declined the shake and stood his ground.

How to describe Tommy? Take big, then multiply. That was just his head. A grey-tinged, close-cropped head that dovetailed into a tank of a body. His Dead Sea eyes, narrowly set, huddled around a large claw of a nose. When he managed to form words, I could see the unhappy extent of his crooked teeth.

Tommy looked impressed at my powers of deduction, then resumed his scowl. ‘Yeah, right.’

‘Save wear and tear on your knuckles next time.’ I gave him a glimpse of my phone. ‘Just call me on the moby. Be over in a flash.’

A hitter not a joker, Tommy only grunted.

I changed tack and sailed straight to the point. ‘Where to this time?’

He jerked a thumb behind his shoulder, indicating a gleaming, silver Merc parked on Bolton Street’s opposite kerb. Jimmy “Kingpin” Cartwright leaned against its rear door, applauding our little show. Once a sadistic bastard, always a …

Jimmy’s crew must have been watching when I’d gone into the Town Hall. And even though I’d come out a side exit and doubled-back, Tommy had caught up with me on the steps down to the Old Bridge. If I hadn’t stopped to make that phone call, I might have avoided him. The regrets didn’t stop there. I had a pretty good idea why the J-team was anxious to find me: the small matter of a bogus interview with Weighton’s Mayor, the esteemed and steaming – at least when I’d left him – Michael Clegg. How was I going to explain that to Jimmy?

Tommy frog-marched me to see his boss, never slackening his grip. My ribs made a silent promise that one day they’d get even with Thomas “The Tank” Man. That’s if I made it through the upcoming joy-ride.

The Merc reeked of expired cigars, expensive aftershave and a dab of fear from occupants past. I squeezed between Jimmy and Tommy on the back seat, and Jimmy told his driver to drive on. Not with any tell-tale directions I noticed. The car eased along Bolton Street, joined the steady traffic across the Old Bridge and then headed south away from town.

Using the rear-view mirror, I scanned the backseat
ensembl
e, looking for omens. My companions appeared jumpy. In contrast, I looked like I was pulling off a calm beyond my twenty-six years, a calm entirely absent on the inside.

An inch short of six foot, I was taller than Jimmy but a good way short of laughing-boy Tommy. When I stared back at myself, it was hard to miss the hazy, grey-blue eyes that implored world peace and optional extras besides. A deliberately untidy mop of blond hair provided the setting for a straight nose and steadfast jaw. Dear God, but I was a handsome git, even if I said so myself – which I did.

The sandstone suburbs started to fall away as we drove deeper into the Weighton countryside. Everyone seemed content with our destination, so I didn’t bother asking.

I clued the Kingpin to my right. Jimmy was wearing his Italian
suit du jour
, a high-collared pink shirt and a rather tasteful – for him – turquoise tie. A tide of Old Spice came from the copious gel he had in his straight, slicked back hair. As I studied him in the mirror, I noticed how his eyes twitched and blinked with each thought, the way computer lights flicker on start-up.

Not blessed with great height, Jimmy was imposing all the same. With a lit cigar wedged between his teeth – that he seemed to be chewing rather than inhaling – machismo projected from him in bales.

We were a long way south of Weighton city boundaries before Jimmy spoke. Quietly, as it happened.

‘You deaf, Eddie?’ His voice was soft as he looked away.

The view I had of Jimmy’s face, minus a smile, was obliterated as Tommy elbowed me in the face. I felt my nose erupt in a mass of bright red plasma and tears streamed from my eyes. I bent my head and cupped a hand under my chin. The warm blood spilling into my palm didn’t feel like it was mine. So much for the straight nose.

‘Use this,’ said Jimmy, passing me a monogrammed handkerchief. ‘And for fuck’s sake, don’t get that stuff on the leather. It’s a bastard getting out.’

I tried not to imagine how he knew this.

I tipped my head back and held the handkerchief tightly under my nose, wiping my other hand on my jacket. The thought crossed my mind to use Tommy’s trousers, but surprisingly for a moron, he guessed. The look on his face encouraged me to think again. I did. Two
ayes
to the right, but the
noes
had it.