Welcome, Caller, This Is Chloe 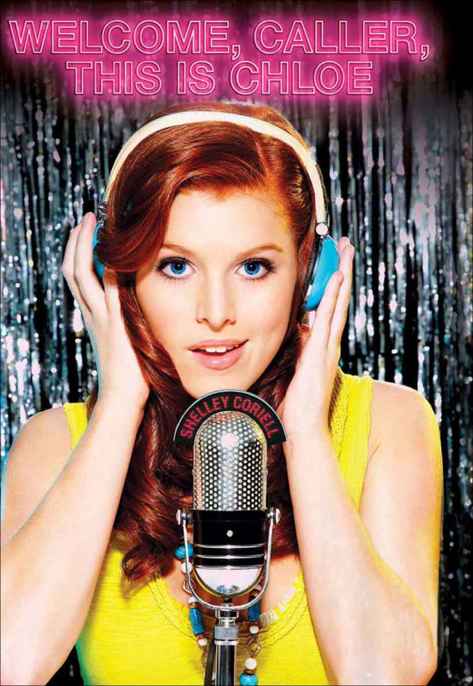 CHLOE CAMDEN HAS A BIG HEART AND an even bigger collection of vintage shoes, not to mention a big personality and a primo spot with the in-crowd. But her world careens off its axis when her best friend inexplicably turns the entire school against her. Alone and desperate, Chloe joins her school’s struggling radio station, where she must team up with a group of misfits who don’t find her too queenly.

Chloe ends up hosting a call-in show that gets the station some much-needed publicity but also trouble, both for the station and for radio techie Duncan Moore, a quiet soul with a romantic heart. On and off the air, Chloe must think carefully about whether it’s better to talk or to listen.

Caller, you’re on the air with Chloe, Queen of the Universe . . . PUBLISHER’S NOTE: This is a work of fiction. Names, characters, places, and incidents are either the product of the author’s imagination or are used fictitiously, and any resemblance to actual persons, living or dead, business establishments, events, or locales is entirely coincidental.

Welcome, caller, this is Chloe / by Shelley Coriell.

Summary: “When big-hearted Chloe Camden’s best friend shreds her reputation and her school counselor axes her junior independent study project, Chloe is forced to take on a ‘more meaningful’ project by joining her school’s struggling radio station” — Provided by publisher.

Published in 2012 by Amulet Books, an imprint of ABRAMS. All rights reserved. No portion of this book may be reproduced, stored in a retrieval system, or transmitted in any form or by any means, mechanical, electronic, photocopying, recording, or otherwise, without written permission from the publisher. Amulet Books and Amulet Paperbacks are registered trademarks of Harry N. Abrams, Inc.

Amulet Books
are available at special discounts when purchased in quantity for premiums and promotions as well as fundraising or educational use. Special editions can also be created to specification. For details, contact
[email protected]
or the address below.

Sometimes change sneaks up on you, carried in on the breath of spring, sliding through the sun-soaked waves of summer, breezing along the whisper and crackle of fall. Other times change prefers a more direct route. It comes down fast and hard.
Wham
. Like a ginormous hammer.

—Chloe Camden,
Shut Up and Listen: A Junior Independent Study Project by a Queen Without a Castle
, p. 1 I LOVED BEING A BURRITO
.

Not the actual costume, a stinky ankle-length tube of compressed foam with scratchy shoulder straps. No, I loved the physical act of being a burrito—more precisely, of getting people to notice me—and I was good at it.

On the final Sunday of winter break I stood in full burrito glamour on the corner of Palo Brea and Seventh. The gorgeous winter sun, the kind created by the gods lucky enough to preside over Southern California, shone down on me. I waved at cars. Sometimes I blew kisses. Sometimes I handed out buy-one-get-one-free coupons for Dos Hermanas Mexican Cantina. And sometimes I performed my burrito shuffle dance in my way-hot peep-toe swing heels.

A woman on a Vespa puttered up beside me. “Nice shoes. Are they legit?”

I handed her a BOGOF coupon and flashed my ankle. “True-blue 1942.”

“Nope. Got them at a vintage shop off Calle Bonita near Minnie’s Place Retirement Community. A real gold mine.”

“Yum.” The light changed and Vespa Girl drove off with a wave and serious shoe envy.

The sun glinted off my silver buckles. There was something deliciously romantic about slipping into shoes that had walked another time and place, something powerful about bits of leather that had survived more than a half century. What stories these shoes could tell if only they had a different sort of tongue.

When I aimed my swing heels toward the corner to hand out my last two BOGOF coupons, I spotted a car that sent me spinning in a happy burrito pirouette. A pearl-white convertible BMW stopped in the turn lane, my BF Brie Sonderby in the driver’s seat. I hadn’t seen Brie or my other BF, Mercedes, for almost three weeks, not since the night of the Mistletoe Ball, the most amazing night of my life. Unfortunately, it had been followed by the worst day of my life when World War III broke out in my living room.

It was a universal truth: When life turned hellacious, you needed BFs. To my extreme dismay, I’d spent all of winter break without mine because Brie had been on a ski trip in Chamonix with the parental unit, and Merce had been on the East Coast touring campuses with lots of ivy. Now Brie was reaching over the Beemer’s passenger seat and gathering papers scattered on the floor.

“Looks like you could use a little help from a burrito with hot shoes,” I said.

When she lifted her head, a gasp hitched in my throat. In addition to being one of my best friends on planet earth, Brie was one of the most beautiful human beings on planet earth, but not today. “What happened?” I asked.

Her fingers curled around the papers like dead, bleached coral. “Nothing.”

Yeah, right. Her lips were the texture and color of ground beef, as if she’d been gnawing them for three weeks. She looked almost as bad as Mercedes did last year after her mother died.

I grabbed Brie’s hand, which felt like a chunk of ice. “What is it? Did something happen in France? With you? Your mom?” I squeezed her fingers, sending warmth. “Hey, Cheese Girl, talk. It’s me, Chloe.”

Brie yanked her hand from mine. “You’re the last person I want to talk to.”

I steadied my hands on the car door. “Okay. Fine. You need some quiet. Pull into Dos Hermanas and let me drive. We’ll pick up Merce, buy some Twizzlers, and—”

“Shut up, Chloe. Just! Shut! Up!” She pounded the steering wheel with each word.

I took a step back, my heel sinking into a divot in the asphalt.

Brie rested her forehead against her fisted hands, her usual gold and glorious hair falling around her face in a dull, tangled mess. “Go away. I can’t deal with you right now.”

I had no idea what was going on, but the heavens were
seriously misaligned. Confusion softened my voice. “Is it something I did?”

“You?” A strange sound—part sob, part laugh—fell from my BF’s ground-beef lips. “Have you ever thought the world doesn’t revolve around you,
Queen
Chloe?”

The light turned green, and Brie jerked upright, her eyes glinting with frost. “Sometimes you’re so self-centered, I can’t stand it.” She punched the gas, and a blast of exhaust enveloped my peep-toe swing heels.

The BOGOF coupons fell from my hand as her BMW squealed around the corner and disappeared. What was that?
Who
was that? And why was she being so . . . so mean?

“Hey, Burrito Babe, move it!” A guy in a blue truck stuck his head out the window and waved a fist at me.

A wicked heat swelled beneath my burrito shell. On shaky feet I headed to Dos Hermanas. Something strange was going on in my world, and I needed an explanation, because of course there had to be an explanation as to why one of my BFs had gone mad-cow.

I drew in a deep breath as I entered the Mexican restaurant, which smelled of roasted chilies and a dash of lime. The smells soothed me, as did Larry, Moe, and Rizado, the three giant papier-mâché parrots hanging above the salsa bar. Everything about the tiny restaurant was in-your-face loud and bright, spicy, and bold. I loved it, and I loved the two sisters who ran it. Twenty years ago Ana and Josie left a dirt-poor village in Sonora, Mexico,
and walked across the desert on bare feet in search of shoes and a better life. They found it here.

“Hey, Rojita, someone called for you.” Josie handed me a piece of jagged brown paper, the kind that crackled out of paper towel dispensers. “She sounded—how you say—agitated.”

“You have problems with school?” Josie asked.

I shoved the note in my burrito pocket. “No.” I had no idea who A. Lungren was, and frankly, I didn’t care about her emergency. I had my own emergency.

My BF had thrust a flaming arrow into the middle of my chest.

I was a lover, not a fighter.

When words collided and emotions exploded, my friends and fam could count on me for a pithy redirect or well-timed joke. But not today, not after my encounter with the angry zombie girl masquerading as one of my best friends. I quietly turned the handle of my front door and slipped into the entryway, ducking to avoid incoming missiles.

Ma Folie Française (My French Folly) by Marisa Raoul
Emergency Ex by Mardi Ballou
Sea Scoundrel by Annette Blair
My Shadow Warrior by Jen Holling
Outriders by Jay Posey
My Dark Duke by Elyse Huntington
Heart's Surrender by Emma Weimann
Eloise by Judy Finnigan
A Spell of Snow by Rowan, Jill
Return to the Isle of the Lost by Melissa de la Cruz