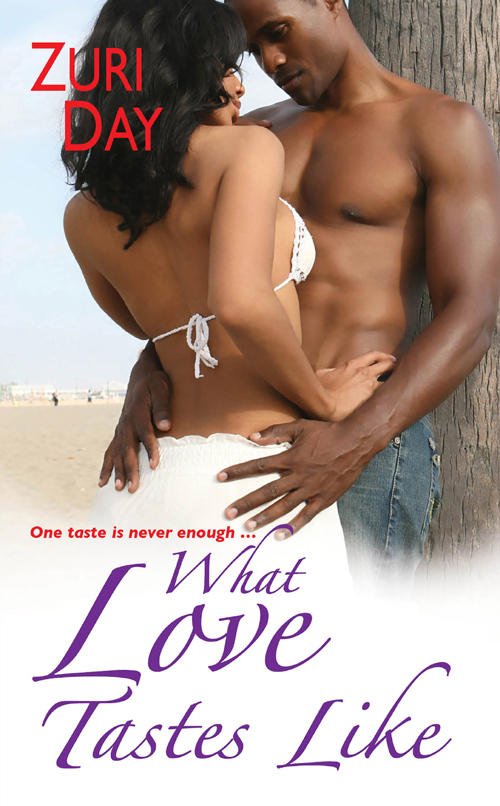 “So it's you who's going to run away this time, huh?” Nick asked.

“Why would I have to run away from you?”

Nick grabbed Tiffany's hand and gently rubbed his thumb over the inside of her palm as he answered. “Because you're trying to deny this almost overwhelming attraction you're feeling for me, trying to hide the fact that even at this moment you're getting wet for me.” His eyes darkened as he continued to stare at her lips, wetting his own.

“Don't flatter yourself,” Tiffany retorted as she gently but firmly removed her hand from Nick's, then grabbed her purse. “I'm leaving.”

Tiffany was fast but Nick was faster. He grabbed her arm before she could run. “I want to go out with you.”

“Why? You have your pick of any woman at the hotel.”

“And I'm sure all of those women are special in their own way. But I want you.” Nick released the grip he had on her arm, but did not remove his hand. Instead he stroked the inside of her forearm with his finger. “You're an incredible woman, Tiffany, and I'm attracted to you. I think we started something beautiful in Italy, and I'd like to see if what we felt there was real or just my imagination.”

Lessons from a Younger Lover

As always, special thanks to the A Team. You're the best! To Eden Chuislekuda, for her restaurant and food-industry expertise. To my mother, one of the finest cooks I ever met, who helped inspire my love for the kitchen, and my sister, Dee, who made it look so easy. Finally, to the Food Network, my in-home school for all things culinary! Especially my favorite chefs, the Neelys, Paula Deen, Alton Brown, Rachael Ray, and the irresistible Bobby Flay. Bon appÃ©tit!

Could anybody possibly be that fine?
That's what Tiffany Matthews asked herself as she fastened her seat belt, took a deep breath, and clutched a teddy bear that looked as frazzled as she felt. The bear had an excuseâit was twenty-three years old. And so did Tiffanyâshe was exhausted. Graduating from culinary school and preparing for a month-long overseas internship had taken its toll.

There was yet another draining aspect to consider: Tiffany was terrified of flying. So much so that even after taking the anxiety pill her best friend had given her, she brazenly endured the curious stares of fellow passengers as they watched the naturally attractive, obviously adult woman sit in the airport, enter the jetway, and then board a plane with a raggedy stuffed animal clasped to her chest.

Tiffany didn't care. During a childhood where her mother worked long hours and her grandmother loved but didn't entertain, Tuffy, the teddy bear, had been her constant and sometimes only friend. No matter what happened, Tuffy was there to lend a cushy ear, an eternal smile, and wide, button-eyed support. This stuffed animal was also the first present she remembered her father giving her, when she was five years old. Unfortunately, his gift stayed around longer than Daddy did, a fact that after years of not seeing him still brought Tiffany pain. They were estranged, and while Tiffany would never admit it, having her father's first gift close by always felt like having him near. Tuffy brought comfortâduring her childhood of loneliness, her teenaged years of puppy love and superficial heartbreak, her college years of first love and true pain, and now, while pursuing a dream her parents felt was beneath her. As the plane began its ascent into the magnificently blue May sky, and Tiffany squeezed her eyes shut, praying the pill would stave off an attack, she knew she'd take any help she could get to make it through this flight, even that of a furry friend.

It wasn't until the plane leveled off and her heartbeat slowed that she thought of him againâthe stranger in first class. Their eyes had met when she passed by him on the way to her seat in coach. Tiffany had assessed him in an instant: fine, classy, rich.
And probably married,
she concluded, as she finally loosened the death grip she had on Tuffy and laid him on the middle seat next to her.
Clearly out of my leagueâ¦.
Still, she couldn't help but remember how her breath caught when she entered the plane and saw him sitting there, looking like a
GQ
ad, in the second row, aisle seat. His close-cropped black hair looked soft and touchable, his cushiony lips framed nicely by just the hint of a mustache. But it was his eyes that had caused Tiffany's breath to catch: the deepest brown she'd ever seen, especially set against flawless skin that not only looked the color of maple syrup, but she imagined tasted as sweet. This information was absorbed and processed in the seconds it took the man two people in front of her to put his carry-on in the overhead bin and step aside so the people behind him could continue. The stranger had glanced up at her. Their eyes had held for a moment. Had she imagined his giving her a quick once-over before he resumed reading his magazine?

Tiffany tilted back her seat and placed Tuffy on her lap. Perhaps it was the medication or the lack of sleep the prior night, but Tiffany welcomed what she hoped would be a long slumber that would take her over the Atlantic, all the way up to the landing in Rome. If she was lucky, she thought, she'd wake up with just enough time to pull her seat forward and place her tray table back in its upright and locked position. And if she was sleeping, she wouldn't be thinking about how much she hated flying, and she especially would not be thinking about Mr. First Class. She knew she was kidding herself to think she made any kind of impression as she passed by the sexy stranger. How could she, dressed in jeans, a Baby Phat T-shirt, and clutching a tattered teddy bear?
No need to sit here fantasizing. If I'm going to dreamâ¦might as well do it in my sleep!

Dominique Rollins, or Nick as he was known to friends, put down the magazine and picked up his drink. After staring at the same page for over five minutes, he realized he wasn't reading it anyway. For some inexplicable reason, his mind kept wandering to the woman back in coach, the sexy siren who'd passed him clutching a teddy bear as if she were five instead of the twentysomething she looked. His guess was that she was afraid of flying and the toy was some type of childhood relic, like a security blanket. But to carry it openly, in public, holding it as if it were a lifeline?
Too bad, because that chick is fine as chilled wine in the summertime.
Nick appreciated the stranger's natural beauty, but he liked his women successful and secure. Not that he was looking for women on this trip, he reminded himself. He wanted a carefree few days without any complications. Nick knew all too well that when it came to the words “woman” and “complication,” one rarely appeared without the other.

Her eyesâ¦
Nick tilted his seat back and sipped his Manhattan. That was what intrigued him about her. In them was a curious blend of trepidation and intelligence, of anxiety mixed with steely resolve. The combination brought out his chivalrous side. A part of him wanted to walk back to where she was, sit her on his lap, and tell her that everything was going to be all right. His rational side quickly shot down that idea. One, she was a stranger; two, she'd hardly appreciate being treated like a child, clutched teddy bear notwithstanding; and three, Nick wasn't in the market for a womanâfriend or otherwiseâhe reminded himself for the second time in as many minutes. He was grateful for his work and the newest acquisition that had helped to take his mind off Angelica, the woman who'd dashed his dream of their getting married and having a family togetherâ¦and broken his heart.

Nick signaled the flight attendant for another drink and reached for his iPod. He didn't want to think about Angelica on this trip. He wanted to enjoy this mini-vacation in Rome, one of his favorite cities, and dine at AnticaPesa, one of his favorite restaurants and the inspiration behind the upscale eatery in his newly acquired boutique hotel.

Thinking about the quaint, thirty-four-room property he and his partners had purchased in Malibu, California, and were transforming into a twenty-first-century masterpiece brought a smile to Nick's face. Following the global economic collapse, the men had outwitted their corporate competition and had gotten an incredible deal on the 1930s Spanish-style building. The group, four successful men with diverse and various corporate and entrepreneurial backgrounds, all agreed that it was the good looks and sexy swagger of Nick and another partner, Bastion Price, that sealed the deal with the sixty-something, hard-as-nails Realtor who'd handled negotiations. This trip was the calm before the storm of Le Sol's grand opening, less than one month away.

Nick pressed the button that reclined his seat to an almost fully horizontal position. He tried to relax. But every time his eyes closed, he saw the short-haired, chocolate brown, doe-eyed beauty who'd passed him hours before, with those hip-hugging jeans and bountiful breasts pressed up against a tight, pale yellow T-shirt.
You're flying to Rome for pasta, not pussy,
he mentally chastised himself. Even so, his appetite had been awakened, and the dish he wanted to taste wasn't from anybody's kitchen.

Code by Kathy Reichs
Madame de Pompadour by Nancy Mitford
The Gillespie Five (A Political / Conspiracy Novel) - Book 1 (42) by T.K. Harris
Fox's Feud by Colin Dann
Escape Me Never by Sara Craven
The Eyewitness by Stephen Leather
Deadly Errors by Allen Wyler
Seal With a Kiss by Jessica Andersen
Their Virgin Concubine, Masters of Ménage, Book 3 by Lexi Blake, Shayla Black
Why We Broke Up by Handler, Daniel