Read When One Door Opens Online

When One Door Opens 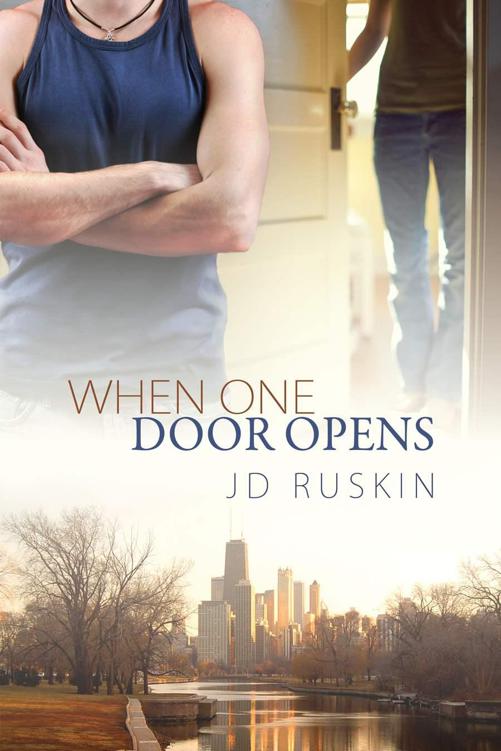 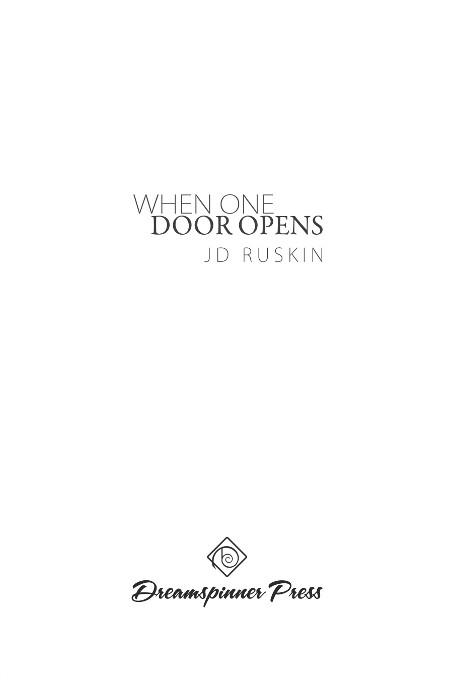 When One Door Opens

For Brit and Kristen.

Thank you for your support and encouragement.

L
OGAN
S
ELLERS
grabbed another box off the truck trailer and placed it on the conveyor belt, sending it down the line to the mail sorting station. He was only an hour into his shift, but his back and thighs burned from the repetitive motion. He was glad the company’s dress policy allowed him to wear shorts and a tank top. He couldn’t imagine surviving the heat otherwise. The industrial fans positioned throughout the warehouse were more likely to render a guy deaf than fend off the roasting temperatures of Chicago in July. Swiping a bead of sweat from his forehead, he reached for another package. The boxes and mailers of various sizes filled the truck bed. Being six feet seven inches was coming in handy for once; he spent less time climbing in and out. The work was hard, fast-paced, and monotonous, leaving no time for idle thoughts. It was the perfect job for him. Idle thoughts had caused him enough problems. He’d been lucky to apply during a time when they were short on package handlers. While he was still considered part-time, according to his supervisor, he would be needed for at least five hours most days. He earned only enough to scrape by, but the early-morning shift meant he could hopefully find another job during the day.

Logan turned toward his supervisor, still holding a box that had to weigh at least seventy pounds. He’d hold the box all day if it meant not dealing with the obnoxious redhead. She wore a pair of hip-hugging jeans and a T-shirt so tight you could ski down her cleavage. “What can I do for you, Ms. Foster?”

“I thought we agreed you’d call me Karen.” As she ran her eyes over him in appreciation, Logan resisted the urge to roll his in return. She pouted her too-red lips at him when he didn’t comment. “The boss wants to see you,” she said before twirling away and sashaying her ass down the line.

Logan sighed, slipping the box onto the conveyor belt. Only one week on the job and already being called into the boss’s office was not a good sign. He made his way through the warehouse toward the back offices, passing a long line of workers pulling boxes from trucks and depositing them on the conveyor belt that ran the length of the warehouse. Rounding the corner, he found the floor manager, Harrison Klass, hovering outside his office. When he caught sight of Logan, Klass’s eyes widened like those of a raccoon facing down a semi. Logan’s height and build meant Logan was used to seeing the look, but now people had a new reason to be skittish around him. Ex-con. He’d been honest when he filled out the job application, but he wondered if the bigwigs had changed their minds about letting someone with a record work here. He hoped not. A steady job was a condition of his parole.

Klass ushered him into the office with a wave of his hand. “Have a seat, Mr. Sellers,” Klass said, sounding calmer than he looked. He was on the short side and sixtyish, with a narrow, lined face. Behind an uncluttered mahogany desk, Klass manhandled a black leather swivel chair into position and lowered himself into it with a sigh. The bookshelves on the wall behind him held binders, books, and folders, all arranged with enough precision to make a drill sergeant smile. “I asked to speak with you to see if you’re interested in making a special delivery for me.”

Logan frowned in confusion. Drivers made deliveries, and as he understood it, it would take a year before he was eligible to apply to the drivers program.

“It would be a—” Klass cleared his throat. “Personal off-the-books delivery.”

Logan had just gotten out of prison. He had no intention of doing anything to get his ass put back. He folded his arms across his broad chest, flexing his biceps just a bit. “I don’t get involved in drugs, not for nothing.”

“Oh, no,” Klass stammered, his eyes skittering between Logan’s face and the hard muscle of his arms. “It’s not what you think.” He rubbed his beak of a nose. “I need your help with my sister’s kid. He’s housebound and needs someone to help him out. You’d be paid a hundred dollars a week plus travel expenses.”

Logan dropped his arms to his sides, thinking over the offer. An extra hundred would make life easier until he could find a better job or another part-time one. He didn’t mind the idea of helping a guy out, but he wasn’t cut out to be anybody’s nurse. “What would I be doing exactly?”

Klass smiled and settled back into his chair as if he’d been sure Logan would ask that question. “Twice a week after your shift, you’ll retrieve mail from his PO box and take back any he gives you. He prefers Monday and Friday, but he can be flexible if needed. Every couple of weeks, you’ll also need to get his order from the grocery near his apartment.”

Klass started fidgeting, twisting the sleeve of his button-down shirt in his hands and looking everywhere but at Logan. “I’d also like you to spend a little time with him just to make sure he’s doing okay.” He scratched his snow-white hair. “Caleb’s an agoraphobic—gets that from his mother, she was a worrier, God rest her soul—and because of his condition, he doesn’t leave the apartment. Are you interested?”

Logan hesitated, wondering why his boss would want an ex-con to take care of his nephew.
Maybe he doesn’t like his nephew?
If the job turned out to be a nightmare, he’d have a hell of a time getting out of it.

Seeming to pluck the thought from Logan’s head, Klass said, “Give it a try and if you decide it’s not for you, I’ll understand. The last package handler, Marco Rodriguez, did it for over a year before he moved to Florida.”

If the last guy did it for that long, how bad could it be? “Okay.”

A
FTER
giving the cab driver the address, Logan looked at the innocuous mailer with the name Caleb Klass scrawled on it.
The guy goes by his uncle’s last name.
He realized Klass hadn’t mentioned Caleb’s dad.
Maybe he’s dead or a complete bastard.
He hoped that wasn’t the reason the guy never left the apartment. When the cab hauled to a stop, Logan paid the driver and climbed out of the car with the envelope mailer tucked under his arm. After unlocking the door with the front entrance key Klass had given him, he made his way into the medium-sized brick apartment building. He considered himself a fit guy, but climbing in and out of a truck bed for the past five hours had left his calves feeling like jelly. The place was in a decent neighborhood, a far better one than the rathole he lived in. No blood on the walls or stench of urine on the stairs was always a good sign.

He got to Caleb’s floor and found his apartment. Number 401. He knocked. And waited. Just when he was about to knock again, he heard a muffled voice through the door: “You’re not Marco.”

Logan peered at the peephole. “Marco moved to Florida and I’m the new delivery guy,” he said, wondering why Caleb didn’t already know this. He heard the lock unlatch, and the door slid open, catching on the still attached chain.

Logan looked at the instruction sheet Klass had given him. Feeling ridiculous, he said, “It says you’ve gotta let me in before I can give it to ya.” He thought he heard a mumbled curse before the door closed and he heard the slide of the chain lock.

The door reopened enough to allow a pale arm to poke through. “My uncle has a twisted sense of humor and loves screwing with the new guy. P-please, just hand over the p-package and we can both get back to our lives.”

Logan hesitated. It had been a long, hot day, and he’d like nothing better than to get out of here. His plans for the weekend included parking his ass in front of the fan and not moving until Monday. He sighed, looking at the sheet of paper again.
Watch out, he’s
sneaky
,
was the second instruction. “You’re not getting this package ’til ya let me in.”

The arm disappeared, and the door opened far enough for Logan to make his way inside. His eyes took a few seconds to adjust to the dim interior. Floor-length black curtains covered the right wall completely, blocking out the natural light. The main room was spacious, but it had been crammed so full of mahogany and leather that the effect would have been stifling if not for the air conditioner set to arctic. Logan took a moment to savor the icy air on his heated skin before continuing to look around. An L-shaped leather couch, a massive mahogany desk that looked just like his uncle’s, and a wall of bookshelves dominated the room. Unlike his uncle, Caleb’s books appeared shoved into all available space and filled with everything from paperbacks to leather tomes to cookbooks. A black entertainment center with a flat-screen TV and a shelf filled with DVDs gave Logan a pang of longing. He couldn’t afford a radio, let alone a flat screen.

Drawing his gaze away, Logan noticed the man hovering in the kitchen that opened into the main room. He was as far away as he could get without climbing onto the back countertop. Caleb had his back pressed against a stainless steel fridge that matched the rest of the appliances in the kitchen. A light sheen of sweat dampened the hairline of his blond hair.

Logan held out his hands, still holding the mailer. “Don’t freak out.”

Caleb’s green eyes narrowed, and he put his hands on his hips. “Is that supposed to be funny?”

Logan winced. “Didn’t mean it like that.” He ran a hand over his shaved head. “People tend to get jumpy when they first meet me.”

Caleb attempted a smirk, but it came across strained. “That’s because you’re a giant.” He took a step forward, keeping the kitchen island between them. “I wouldn’t be surprised to learn you eat angry villagers for breakfast.” He had his uncle’s talent for sounding calmer than he looked, but his body language screamed “scared rabbit.”