Read When the Air Hits Your Brain: Tales from Neurosurgery Online

When the Air Hits Your Brain: Tales from Neurosurgery 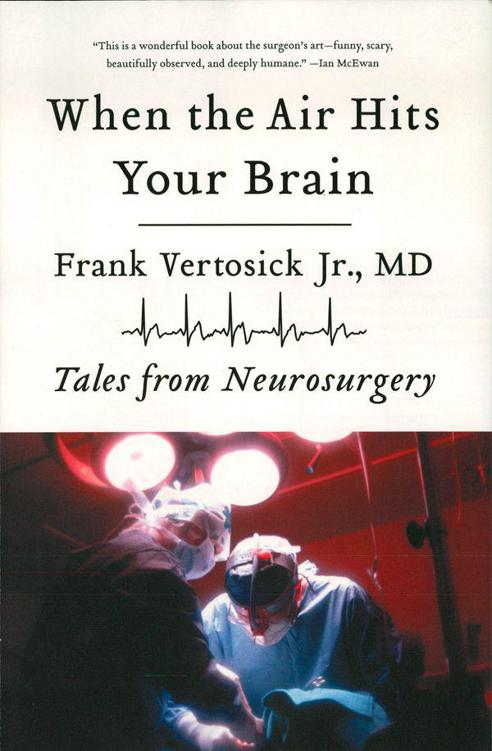 1 The Rules of the Game

5 The Museum of Pain

8 If It Was Easy, Everyone Would Do It

9 A Bit of Hard Cheese

11 Nightmares, Past and Future

12 The Wheel of Life

WHEN THE AIR HITS YOUR BRAIN

“At a time when doctors have forgotten how to be teachers, and medical training has become disease-oriented and depersonalizing, comes a book that can help alter that view.
When the Air Hits Your Brain
lets you feel the pain, grief and joy of practicing medicine. I know from experience that some physicians believe their M.D. makes them Medical Dieties but I know for me it meant My Disease. Read and understand the emotions and feelings physicians live with that they are poorly prepared for by their disease-oriented training. Physicians know how to think but not how to feel. Dr. Frank Vertosick is not a ‘normal’ doctor, thank goodness. This book should be read by every medical student, doctor and present or potential patient. In other words, by all of us.”

“Dr. Frank Vertosick provides an amusing, insightful and honest inside view of the training of the neurosurgeon. This highly readable account of daily life on the wards shows all the humility, fortitude, and humanity that genuinely underlies this sometimes not well-understood but genuinely wonderful profession.”

First published as a Norton paperback 2008

When the air hits your brain : tales of neurosurgery / by Frank T. Vertosick, Jr.

TO FRANK AND VERONICA,

who raised me to be whatever I wanted to be

Surgeons must be very careful
When they take their knife!
Underneath their fine incisions
Stirs the Culprit—
Life!

N
eurosurgery is an arrogant occupation. Astronomers study the stars but never touch them. Particle physicists see God in the vapor trails of their great atom-smashers, but cannot see the particles themselves, cannot reach into protons and feel the quarks with their fingers. Molecular biologists sing the praises of the double helix, but the gene is forever an abstraction, invisible to the naked eye. These scientists must be content with the shadow nature casts upon their instruments and photographic emulsions. But not the neurosurgeon, for whom the greatest mystery of creation resides in a few pounds of greasy flesh and blood. Only the neurosurgeon dares to improve upon five billion years of evolution in a few hours.

The human brain. A trillion nerve cells storing electrical patterns more numerous than the water molecules of the world’s oceans. The soul’s tapestry lies woven in the brain’s nerve threads. Delicate, inviolate, the brain floats serenely in a bone vault like the crown jewel of biology. What motivated the vast leap in intellectual horsepower between chimp and man? Between tree dweller and moon walker? Is the brain a gift from God, or simply the jackpot of a trillion rolls of DNA dice?

The answers to these questions rest at the uncharted boundary between theology and science. We do know one certain thing about the brain: it is not unbreakable. When an unfortunate
homo erectus
plummeted from a cliff, suffering the first hominid head injury, mankind learned of the exquisite vulnerability of the pink goo between their ears. Surgeons of antiquity believed the brain sacrosanct, beyond their healing skills. As late as the nineteenth century’, when bold surgeons attempted anything—even the repair of a beating heart—the nervous system was still considered off-limits. Although ancient shamans trephined holes in the skull to allow evil demons to escape, they knew that breaching the dura, the brain’s leathery covering, meant the patient’s sure demise from infection, bleeding, coma.

Some mornings I awaken and wonder how I ended up a neurosurgeon. One day I was a poor college student rummaging under my sofa cushions for a few quarters to buy french fries; the next thing I knew I was wrist-deep in someone’s skull. What happened in between remains a blur.

There is a misconception that surgeons flock to their profession at an early age, drawn as if by a religious calling. Well, I didn’t grow up planning to be a brain surgeon. I admit, as a child, I tried to build The Visible Head model—but I threw away the macabre plastic replica,of a human noggin when the eyeballs fell out and rolled off the kitchen table. I should have taken this as an evil omen, but alas, I didn’t. So here I am.

What draws people into “glamorous” medical careers? For some, it’s vindication for being a loser early in life: the grade school wimp beaten in the playground, the high school geek who never had a date. For others, it’s the secure (and large) income. As for me, I wandered too close to a dangerously seductive profession and wound up stuck for good, a fly in the spider’s web. Had I never seen a brain operation, I doubt that the thought of doing brain surgery would have occurred to me. But once I viewed the living brain and was exposed to the seductiveness of the profession’s arrogance in the flesh…I was hooked.

Brain surgeons have a well-cultivated public mystique, an aura of supreme intellectual and technical competence created by the imperious and brilliant Harvey Cushing, father of American neurosurgery and one of the first surgeons to specialize in brain operations. Cushing descended from a long line of medical men. Aristocratic and dashing, he drank his afternoon tea from fine china and stored his cigarettes in a sterling-silver case. He also had a keen eye for the media, fashioning himself into the medical superstar of the pre-television era—he even made the cover of
Time
magazine. Cushing knew that the brain was better PR than blocked colons and gangrenous legs. He endlessly exploited the public’s fascination with his infant specialty.

But, in truth, the myth of the brain surgeon is largely that—a myth. While one can’t be stupid and be a neurosurgeon, brain surgery isn’t the most intellectually demanding occupation on earth. I can read a CT scan, but the people who designed and built the scanner’s circuits tower over me in cognitive power. I see a blood clot crushing the life from a brain and deduce that the clot should be removed, but Gomer Pyle would reach the same conclusion.

My job is not easy, however. The high stakes make it tough. Unlike other parts of the body, the brain and spinal cord have
little capacity for self-repair. If a general surgeon injures a piece of bowel during an abdominal operation, she simply stitches the injury, or, if that’s not possible, removes the injured segment. With eight yards of bowel, there’s plenty to spare. Even a trashed heart or liver is replaceable. But when I cut a nerve, it stays cut.

Neurosurgeons do things that cannot be undone. The grave consequences of our actions render even the most trivial of tasks difficult. Put a footwide wooden plank on the driveway and walk its length: no problem. But suspend that same board ten stories in the air and try walking its length again. The difficulty of a task transcends mere mechanics. Irreversibility of our missteps is one reason why I also awaken each morning wondering how I can get out of neurosurgery. The fly struggles in the web.

Our training period, simultaneously the worst and best part of our careers, remains one of the most arduous apprenticeships on earth. There are no neurosurgical prodigies. Little Elmo will never be the first in his advanced-track grade school to lop out a frontal lobe. Whether genius or dolt, everybody runs the same seventeen-year gauntlet from high school to board-certified brain surgeon. Why? Because neurosurgery, like all surgical fields, is a cult, a religion with mandatory rites of passage. All trainees must submit to the ordeal, must endure the withering years of death and disease, must feel abject humiliation at the hands of their professor-priests. In addition to professional brainwashing, the training process also achieves the unstated goal of turning out people who not only can
do
neurosurgery but also
look
like neurosurgeons in the Cushing mold: gray, chain-smoking males. The longer the program, the older and more persuasive the surgeon. A twenty-five-year-old man can pilot a spacecraft to the moon, but please keep him out of Mama’s head.

This book details my odyssey into neurosurgery. However, the story focuses not upon my own talents, which are far from exceptional, nor upon any bizarre case histories or lurid physician behavior. No sex in linen closets here, no inside scoops on prominent medical personalities. The focus is upon the ordinary: ordinary patients and doctors facing difficult diseases and, at times, displaying extraordinary courage.

The book is a loose collection of clinical tales. I recall my residency as an anthology of patient experiences, not as a didactic education or a plotted story line. I remember nothing of the chapters on rheumatoid arthritis I read in medical school, but I do remember the distraught grandmother with gnarled fingers who could no longer roll cookie dough for her grandchildren. The book, like my training, is a collage of human beings.

The patient vignettes tend toward the gloomy side, and I may be accused of making the field of neurosurgery look like
Hamlet,
in that nearly everyone dies in the end. These stories do not mirror the field of neurosurgery at large, in which good outcomes vastly outnumber complications and deaths. I chose cases that became landmarks in my own progression from steelworker to surgeon of the central nervous system. Failure instructs better than success. A single death shapes the surgeon’s psyche in a way that fifty “saves” cannot.

Neurosurgeons face terrible diseases—brain cancers, spinal cord injuries, head trauma, lethal hemorrhages. We confront patients deprived of speech, movement, vision. In manycases, disaster strikes them like lightning, in the form of sudden headaches, seizures, car accidents, or simple stairway tumbles. We see what no one would ever ask to see. Nevertheless, the nobility of the human spirit will always shine through the ugliness. The worst tragedies can be the most inspiring. During my training, I felt like Robert E. Lee, who, after witnessing great
heroism in the midst of terrific carnage, mused: “It is well that war is so terrible, or we should grow too fond of it.”